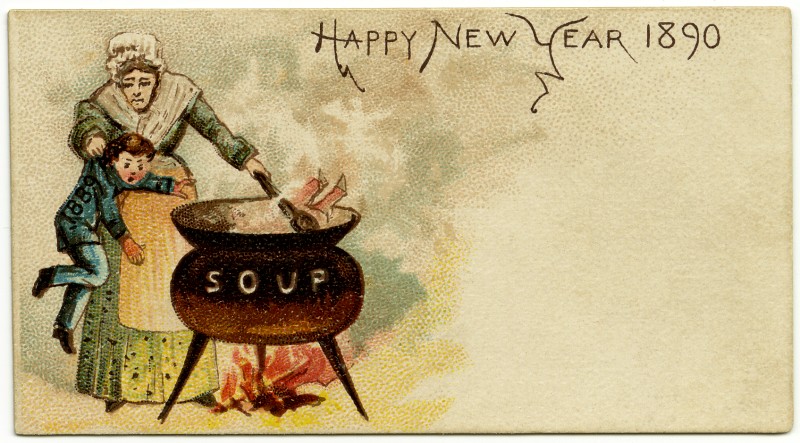 This picture, though 123 years old, pretty much sums up our view of the past twelve months. It was a kidney stone of a year, and we couldn’t pass it fast enough. And since this will be our last post of 2014, we thought we’d feature a few random thoughts and observations about it, and point our loyal readers to what they can look forward to in the time it takes our blue marble to rotate around good old Sol one more time.

What exactly happened on our food scene this past year?

– db Brasserie (Our favorite French-American chef returns to Vegas with solid bistro fare, and a room we wish was half its size.)

– Giada – The Restaurant (on Earth – The Planet)

– Carson Kitchen (Brought 3 groups of people to downtown that had never been seen there before: foodies, attractive women and rich white folks.)

– The Goodwich (Vegas’s best sandwiches, without a doubt.)

– Cocokala Izakaya/J Sake Bar (Along with Yonaka, THE place to head, when Raku is booked.)

As you can see, if the SLS Hotel and Casino hadn’t popped on the scene a few months ago, the Strip would have been practically inert.

Each closing got our attention, and reaffirmed our suspicion that cash-strapped casinos (Caesars) and idea-deficient monoliths (MGM-Bellagio) are just milking whatever old cows they have on hand for all they’re worth.

For what it’s worth: when ELV and his staff go out to eat on the Strip these days, we invariably head to a few tried and true icons (our Top 10, plus a few others, usually in the SLS or the Venetian/Palazzo), and leave the rest of the worn out, celebrity-chef warhorses to the tourists and  free ‘zine freeloaders).

And as much as we’ve criticized (and gone to war with) the Wynncore in the past, it retains four restaurants: Botero, Mizumi, Allegro and Bartolotta Ristorante di Mare that are outstanding in their class — if you can afford them.

Most disappointing meals of the year:

– Scarpetta (As much as we love the staff here, the food has gotten more tired than a Scott Conant car commercial.)

– Central (It was d.o.a. and deserved to be shot like the dead horse it was.)

– Bocho (Downtown needs another good restaurant. This isn’t even a mediocre one.)

– The Perch (Within one month, we went from loving this place to loathing it. Just goes to show you why one visit to a restaurant is never enough – if the critic wants to do a proper job. Which no other critic critic in town even attempts to do.)

– Heritage Steak (More correctly: the shitty steakhouse that Tom Colicchio sold his name (and his reputation) to in the Mirage. The bald-pated one should be sentenced to 90 days of eating at Applebee’s  for this latest exploitation of his (largely undeserved) celebrity chef status. Craftsteak is our most overpriced, celebrity steakhouse, and HS is, by far, the worst.

Worst Meal of the Year:

Disappointing Event of the Year:

The Downtown Food Film Festival (We thought a monthly peek at some of our favorite food films – for free no less – would pack ’em in. Instead, 14 people showed up. So much for our irrational enthusiasm about food movies.)

Saddest Day of Our Restaurant Life:

Meals of the Year:

– Yusho (If this place doesn’t make it it will be a bloody shame.)

– District One (One – actually two – meals made me a convert to the cult of Vietnamese food and pho.)

– Giada – The Restaurant (On Earth – The Planet, the day it opened.)

– The Lunch Bunch at Julian Serrano

– The wine tasting lunches at I-Naba (They’re for professionals only, but if you can wrangle an invite, you won’t taste better wine with finer food anywhere in our humble burg in the middle of the day.)

– Le Cirque’s new fall menu. (Cooked by new chef Wil Bergerhausen – who will be someone to watch.)

– Bazaar Meat (We’ve heard complaints, but each of our four meals here have been spectacular.)

– Cleo (The best Mediterranean food in town, bar none.)

– Made LV won’t make it. (The owners – who don’t exactly send ELV no Christmas cards – have been heard bitching about how they’re not hitting their numbers – even with free rent.)

– Simon at Palms Place to close. (This isn’t a prediction; it’s a fact that PP hasn’t renewed the Simon lease. Expect the shuttering to occur sometime between February and May.)

– David Clawson should garner a Best New Restaurant nomination from the James Beard Foundation (if you know who has anything to say about it).

– So will Carson Kitchen.

– Raku/Raku Sweets will also garner (another) JBF nomination, and will once again be passed over for some joint in Phoenix or Palo Alto.

– The celebrity chef thing will continue to wane on the Strip….because whatever star power Bobby Flay, Jean-Georges Vongerichten, Wolfgang, Emeril et al ever had is also on the wane. Expect to see more minor key (but major-ly committed) chefs like Matthias Merges probing the Strip for opportunities. Portland/New York sensation Pok Pok would be a perfect in the Cosmo, for example, or any hotel looking to up its food/beverage game.

– Le Cirque will continue to shine at the Bellagio, despite everything else they’re doing there.

– Michael Mina’s brasserie will open in the Aria to a great big yawn. (Don’t get us wrong; we love a lot of the work MM’s done, and really enjoy his eponymous restaurant in the Bellagio…and all of his ventures in ‘Frisco. But he’s spreading himself too thin and someone (like ELV) has to tell him that he’s lost his clothes, at least as far as him far flung empire is concerned.)

– People will continue to come up to ELV and say: “We really like Echo & Rig.” To which he will respond; “What you like about it are the prices and the no corkage fee; the food is awful.” Which will cause them to look at him with bemused defeat and agreeable silence.

– Vegas UnCork’d will continue to die a slow death.

– Ditto Restaurant Week, which is but a shell of what it was six years ago.

– Every restaurant on Spring Mountain Road will become a ramen bar.

– Every restaurant on the Strip will use the word “tapas” in its name. “Restaurant Guy Savoy and Tapas Bar” has a nice ring to it, don’t you think?

– Then kale will re-become the new kale.

– Every neighborhood steakhouse that’s not named Fleming’s will struggle.

– Eater Las Vegas will continue to publish press releases disguised as articles, which no one reads or is interested in.

– Alex Stratta‘s Tapas will never open in Tivoli Village. The original opening date of mid-December came and went without a p.r. peep. ELV went to the Tivoli space last week to investigate, and the same tables and chairs from the last tenant were still where they were the day the other joint folded. We’ve heard there are “liquor licensing” issues, which is restaurant-speak for “things are pretty fucked up and we may never open.”

– Eating Las Vegas — the blog, the man, the unimpeachable food resource — will re-dedicate itself to bringing you the best in erudite, informed, opinion, unbridled by bribes, favor or favoritism, as it pertains to the Las Vegas restaurant scene.

Hardest Work of the Year:

Meal of the Year:

Our “Thanksgiving Most Fowl” prepared with No. 2 Son Hugh Alexander Curtas, wherein we roasted a pheasant, guinea hen, duck and four Cornish game hens (all with individual stuffings and garnishes). It was an epic feast that wore ELV out, but inspired him to do more home cooking in the coming year — which, of course, you’ll get to read about on these pages.