“I’m sorry, but we are no longer taking requests for media day,” the e-mail said.

“Wait. What?” we thought to ourselves. “You won’t give a little early access to Eating Las Vegas so we can get some first photos of your restaurants? DON’T YOU KNOW WHO I AM?”

The fact is, the p.r. hacks and flacks running these things usually don’t. Which bothers us not at all.

Because the last thing you want when you go restaurant exploring in a shiny new Vegas hotel is to be followed around by some clueless bimbo.

So with that e-mail tucked into our pocket, we went anyway. Strolled in like we owned the joint, six hours before the official opening, to patrol the premises alone, without being herded like cattle with the various free-‘zine freeloaders on property.

The next morning, we went again. Early. Hungry. And ready to do some serious research. 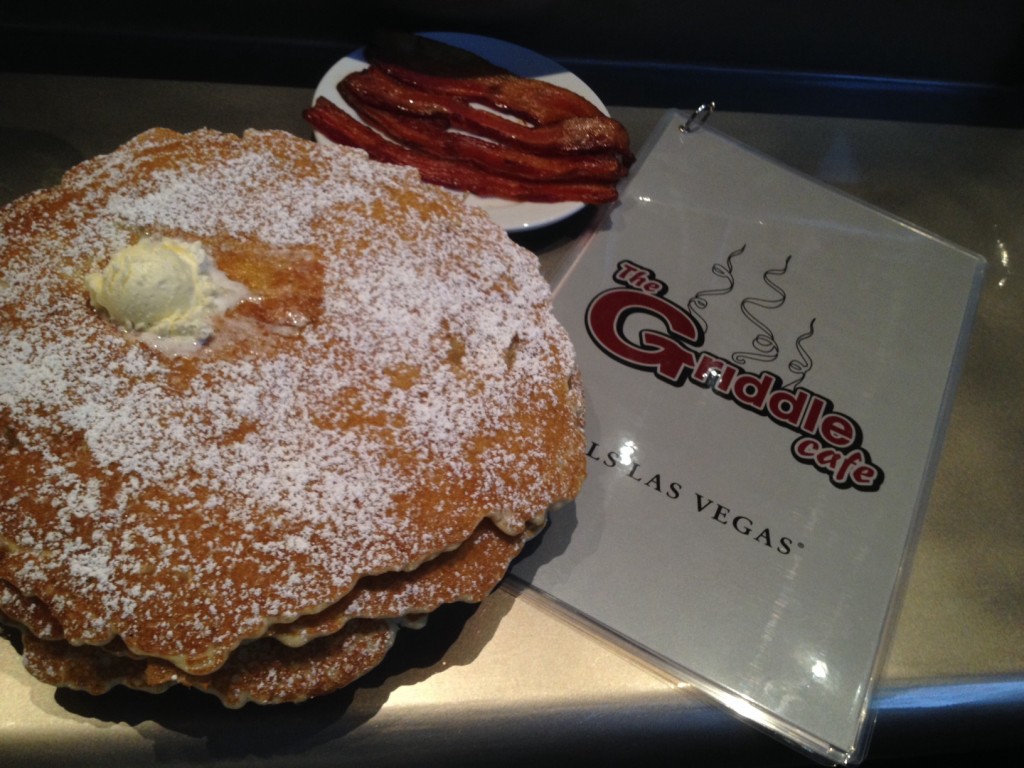 We’ll say this about the Griddle Cafe: It makes the best goddamned buttermilk-banana pancakes the size of a manhole cover we’ve ever seen. They are tangy, and fluffy, and light, and one order is enough to feed four people. Along with five thick slices of really good bacon, and a healthy pour of real Vermont maple syrup, we were one satisfied puppy — even if we barely made a dent in this  three-stack  buttermilk behemoth.

As you can imagine, it didn’t take long. In a parking lot across from the hotel was a fellow in a wheelchair asking for money:

“Are you hungry?” we asked.

“Would you like something to eat?” we asked somewhat timidly, pointing to the pizza box stuffed with still-warm flapjacks we were holding.

“Yeah, gimme some money,” was his snarling response.

With that we handed him the box. “Look, these are really good, we said. “I just couldn’t finish them. Take a bite, you’ll like it.” Then we smiled at him and walked away.

Three seconds later, we turned at hearing the shout: “Fuck you, asshole. Gimme some money!”  And watched him throw some of the best pancakes we’ve ever had on the ground.

Overall first impression: Griddle Cafe is worth a trip, but take a crowd.

Takeaway: Clean your plate, and the best way to deal with beggars and bums is to ignore them.

(Get OUT…you beautiful bitches!!!! Until ELV eats there.) 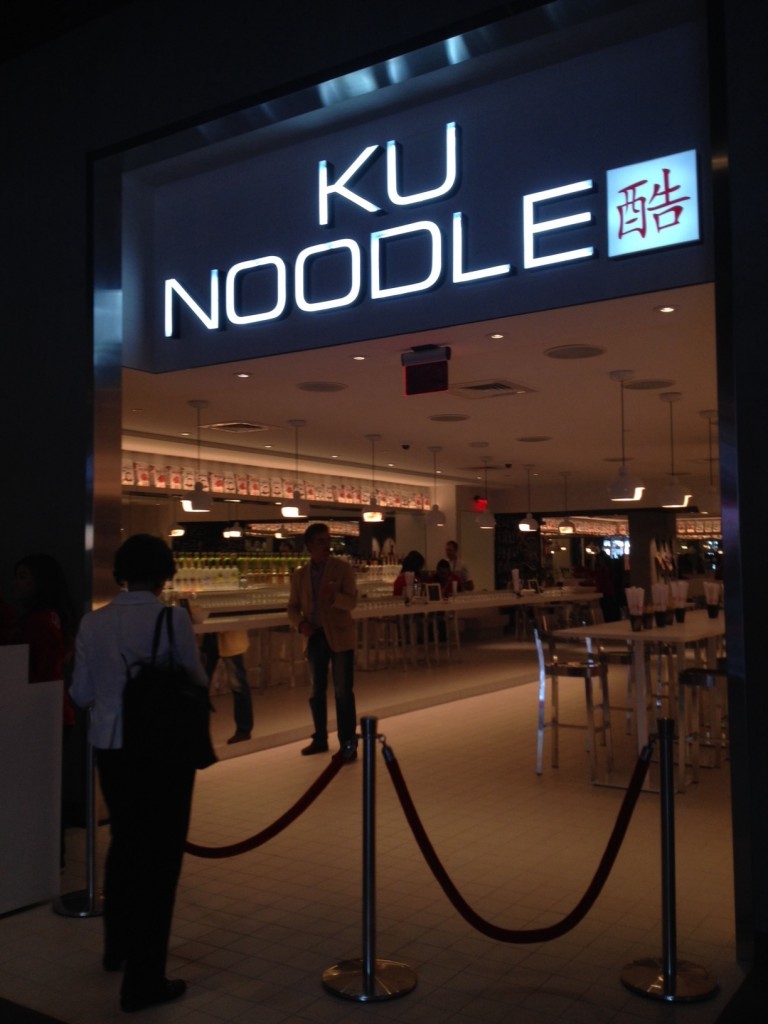 Fresh from his failed attempt at elitist/indigent diplomacy, ELV repaired to Ku Noodle, determined to be its very first paying customer. To do this, we established a beachhead at the hostess desk — a veritable fortress of intimidation — somewhere between Tim Duncan blocking out for a rebound and the Wehrmacht defending Normandy on D-Day. No one, NO ONE was going to walk into this restaurant ahead of Eating Las Vegas. We were hungry (hey, it’d been a whole hour since we last ate); and we were (still) mad (at the homeless dude).

We were going to be Ku Noodle’s first patron if it meant committing seppuku with a chopstick.

And then Andy Wang showed up. Yeah, that Andy Wang. Über-food writer Andy Wang. And he had a reservation — at 11:00 am when the doors were set to open. ELV’s head began to spin. F*CK YOU Andy Wang!  F*CK YOU and the free horse from L.A. you rode in on! WHO THE HELL DO YOU THINK YOU ARE!?!

To make matters worse, Andy was meeting one of those Kirvin Doak p.r. babes. And she was going to waltz him into the restaurant AHEAD OF US! (Yes, even when fulminating in a blind/suicidal/homicidal rage, we think of ourselves in the third person.)

Our spirits sagged; our shoulders slumped. Even our appetite disappeared. Depression, then resignation set in.  Our entire life as an abject, day-late-and-a-dollar-short loser flashed before our eyes. We even contemplated giving up food writing altogether. (All of  this in less than three seconds.)

Then Andy tapped us on the shoulder, shook our hand and said, “Hey John, would you like to be first in the door?”

And just like that, order was restored to my (tiny, self-involved) universe.

Then he suggested we sit together and order on our own — rather than chow down on whatever the kitchen was set to send out to the free-‘zine freeloader crowd.

Whether he knew it or not, right then and there he had a friend for life.

From there, the two of us proceeded to eat half the menu.

Anyone familiar with the menu at China Poblano knows that José Andrés knows his way around a shumai. The ones here won’t disappoint you but the things to get are the Ants Climbing a Tree (cellophane noodles flecked with pork and chilies): 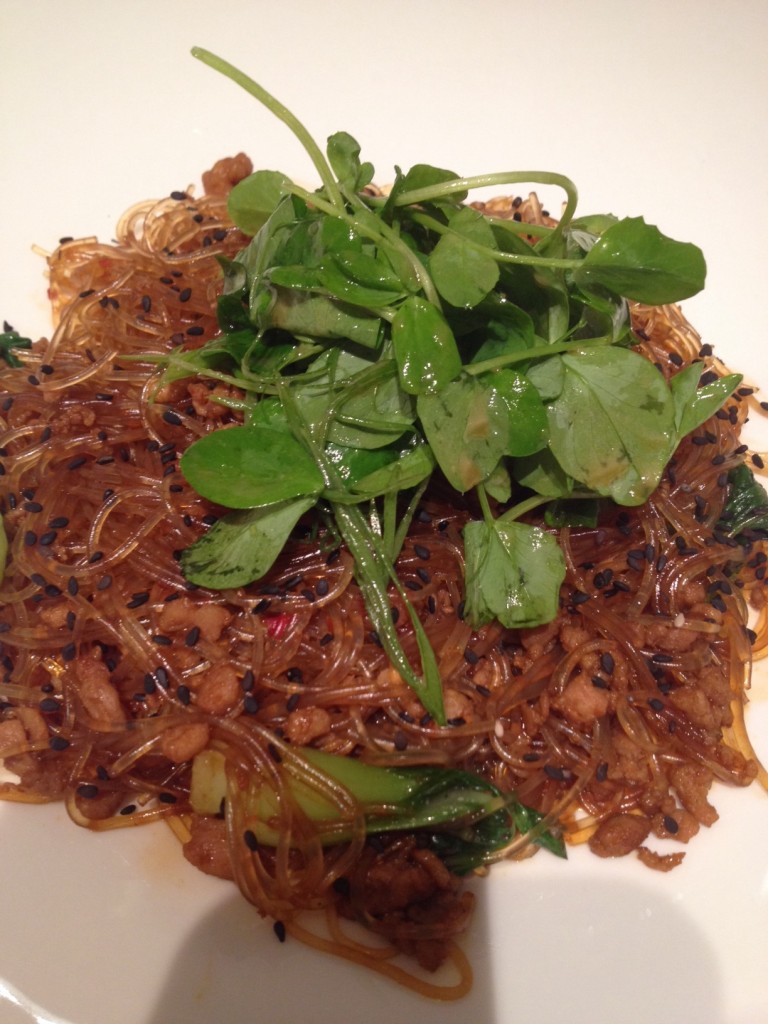 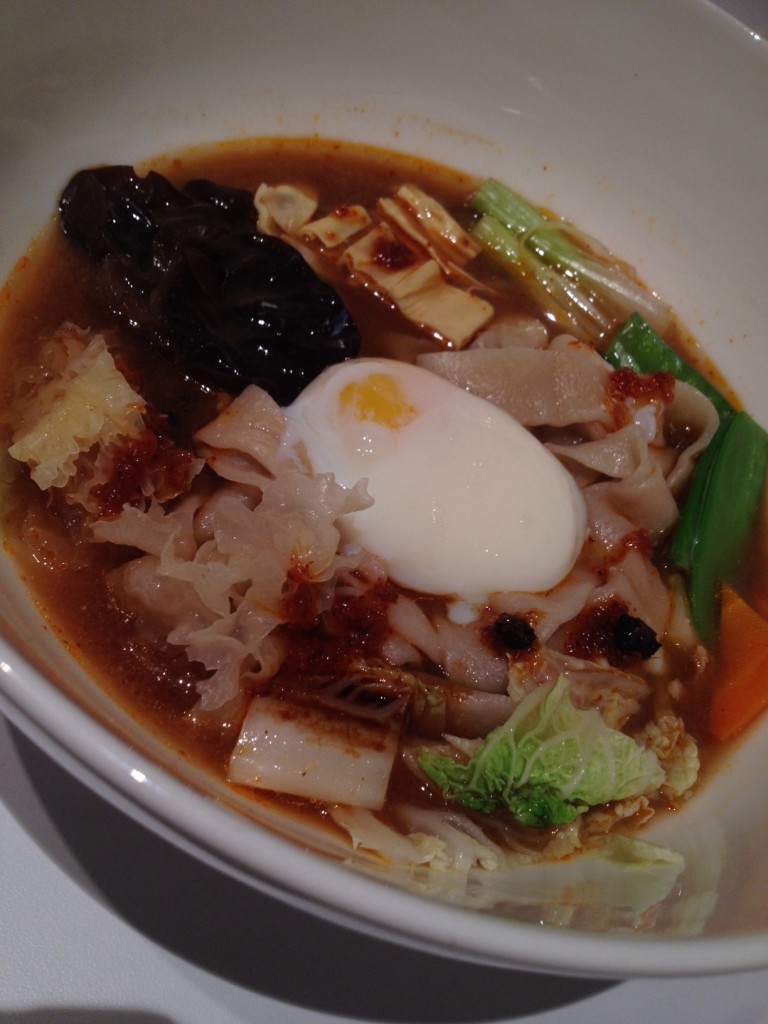 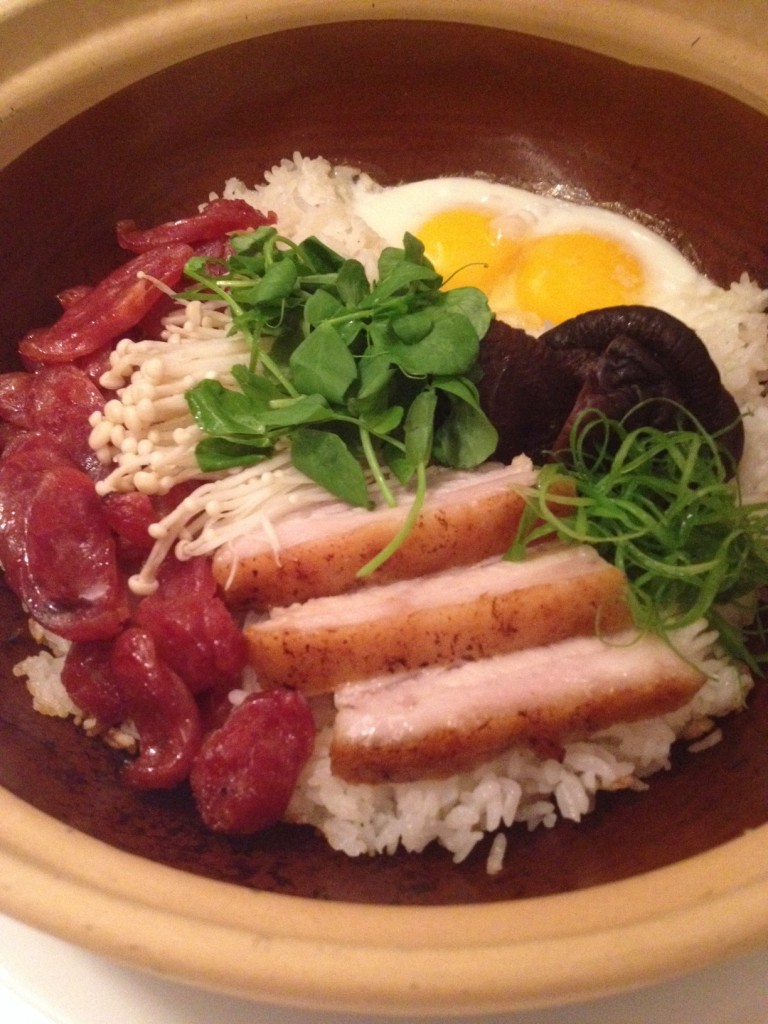 “José Andrés does Chinese paella,” is the way Andy put it, and we can’t think of a better description.

By the way, the Watermelon and Watermelon Radish salad was as perfectly dressed as salad can get, and the Crispy Bao Bun — really more like a pork belly sandwich — wasn’t half bad either, although it may be a little too much fatty pork on too much of a (real burger) bun for some folks.

Overall first impression: What Beijing Noodle #9 was in its (short) heyday, only better.

Takeaway: Andy Wang is one helluva lunch companion, and a major fresser. 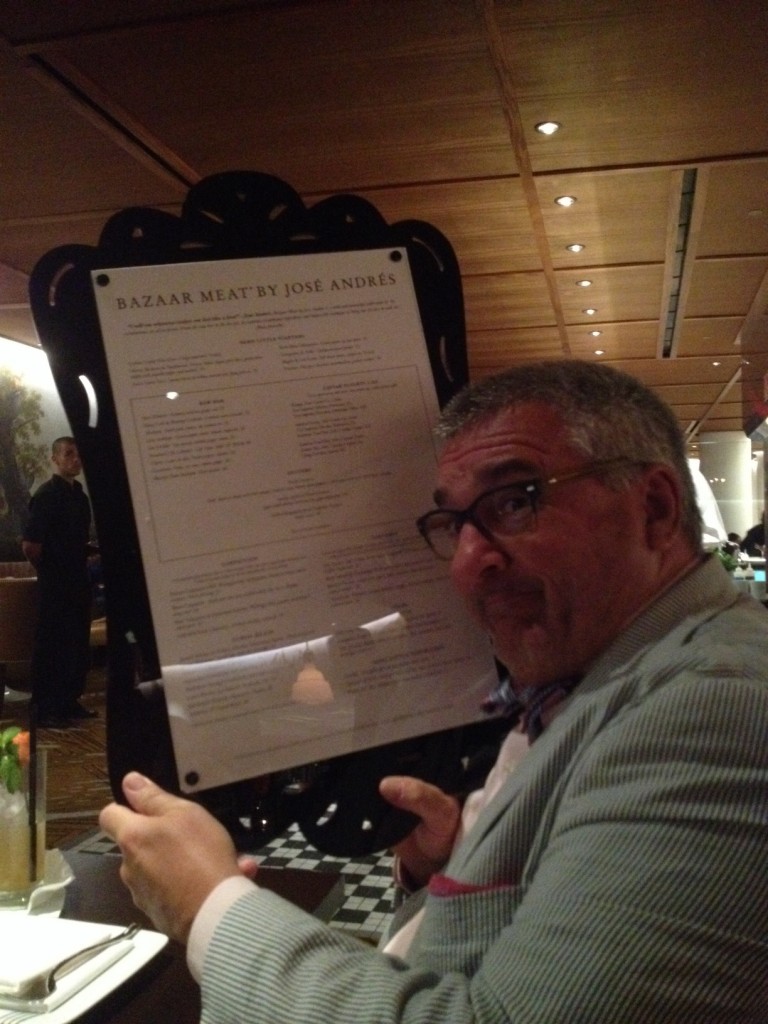 The pulchritudinous hostess was sweet yet insistent: “I’m sorry sir, we are fully committed for the evening.”

Oh, how those words rankle ELV.

The answers are: no, really no, extremely no, get over yourself no….and what does “burnish” mean?

Anyway, ELV, displaying all the finesse of a six-year old cow in a Riedel shop, mosey-d on over to the bar where GM Lassine Lyoubi spotted us and whisked to a table in short order.

From our perch at the best seat in the house, we observed a parade of Hollywood hotties and well-tailored men the likes of which we had never seen at a Vegas casino opening (and ELV has been to almost all of them in the past twenty years.).

It was, without a doubt, the first hotel/casino launch in Las Vegas history where the Arabs outnumbered the Jews.

And with all due respect to Shellie-baby and Steverino, none of them have anything that competes with Bazaar Meat.

Take this not as a full review, but more as a preliminary sampling of half a dozen dishes. And keep in mind, the big guy himself was there, schmoozing up a storm and eyeballing everything that came out of the kitchen.

Speaking of schmoozing, guess who made a surprise visit to our table?: 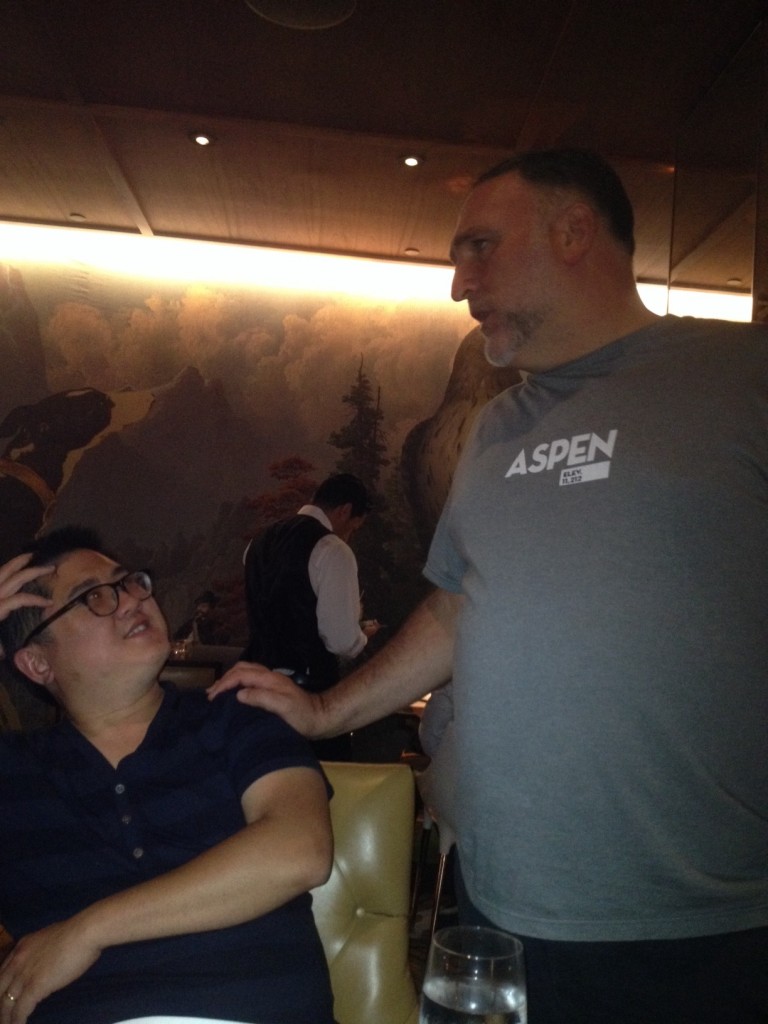 None other than the Wang-meister himself! Which prompted José to doff his chef’s jacket and drop on by for a few minutes of friendly banter:

ELV: José, isn’t the test of these fabulous restaurants not how they perform when you’re here, but what the food and service will look like 9 months after you’ve delivered the baby?

JOSÉ: Of course, but I have my “A” team in place here, and you need to enjoy your food more and think less.

We tried to pay more attention to the conversation (“I heard you were the first person in Ku Noodle today.””Really? I was? I didn’t even notice.”), but were too infatuated with a superb flat iron steak, Creminelli wild boar sausage, broccoli leaves with lemon espuma (foam), and oily (in a good way) rich, roasted eggplant with peppers to pay close attention to the Andrés/Wang “woe-is-me-I-work-too-much/woe-is-me-I-eat-too-much” dialogue.

As good as everything was, it was some braised lamb neck with oyster ketchup(?): 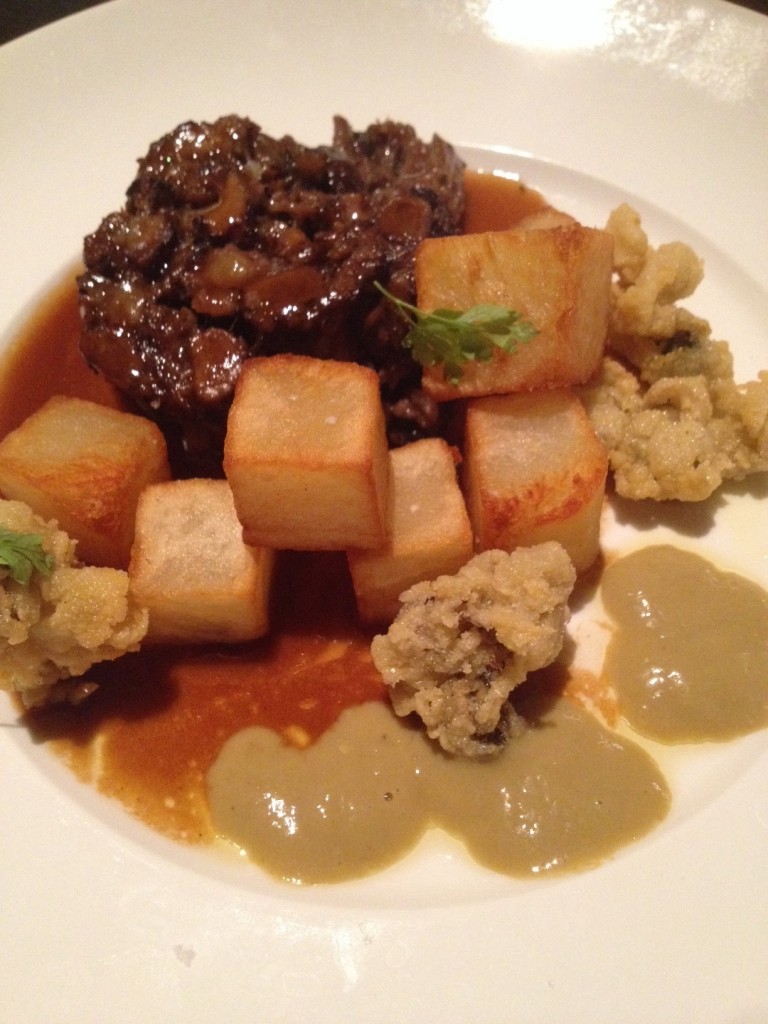 ….that really got our attention. Andrés explained the dish as an homage to George Washington(?) — since the first ketchup ever in America was made by draining and pureeing oysters into a sauce like the one you see above.

History lessons aside, it was a bizarre combination that somehow worked splendidly — the density of the wine-braised lamb meat somehow complimenting (or being complimented by) those crispy bi-valves.

There’s no doubt in our mind, Bazaar Meat is destined to be a game changer. As carnivores shy away more and more from devouring single serving slabs of animal muscle, the solution here is large format dining: 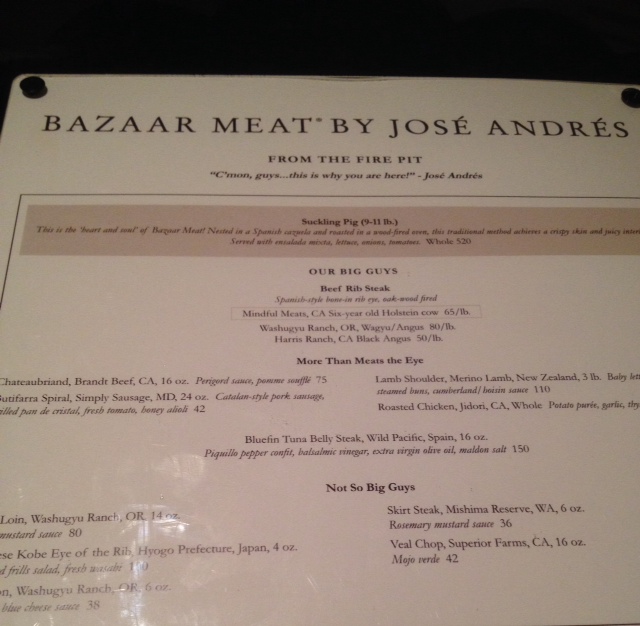 In other words, do what lots of well-heeled meat eaters do these days: value quality over quantity; get a great steak and share it with your table.  Meat cravings get sated, cholesterol counts come down, and you share the expense of first grade beef with your friends. Everyone wins! (Except the cow.)

Cost of meal: We’ll never know since Andrés tore up the check and threw it (playfully) in our face. We’re guessing it would’ve been around  $150 — for one of the cheaper ($38) cuts + four other courses and three glasses of wine. Between AW and ourselves we collectively left a $90 tip.

Overall first impression: A game changer. Destined to compete with Carnevino and Cut as the best steakhouse in Las Vegas. May even garner accolades as the best meat emporium/steakhouse in America (you heard it here first). 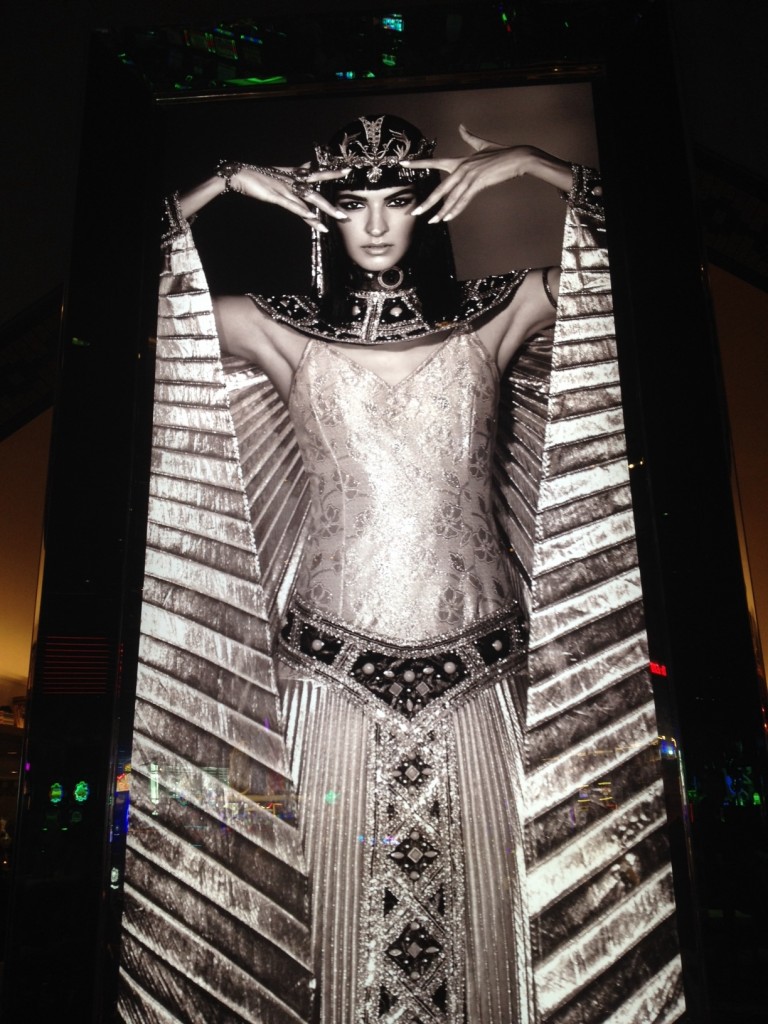 Becoming the best Mediterranean/Middle Eastern restaurant in Las Vegas is a lot like being the best piano player in Wyoming (or the best food writer in Nevada), but that’s the ground this joint has staked out.

The menu is a greatest hits compilation of food from Morocco to Lebanon — with many a nod to Greece, Egypt, Turkey and Israel along the way.

The restaurant is another in SLS Las Vegas’s share and share alike eating parlors (remember: even the pancakes here are for a crowd) and to get the most out of your experience, it’s best to go with a party of 3-6 and dive in. (That being said, The Food Gal® and yours truly enjoyed ourselves just fine with 6 plates, two glasses of wine and a dessert.

Almost everything we tried was a winner — with the Labneh with Feta; Kibbeh Nayyeh (spicy, raw lamb tartare) and the chicken Tangine being standouts. The vegetarian dolmades would pass muster with my yia yia, and there was nothing wrong with the Watermelon & Feta salad that a little more feta cheese wouldn’t fix.

About the only thing we didn’t like at the place was the music. Blue Oyster Cult covers and bad Rod Stewart is stoner chef music at its worst. My popou would not approve.

Overall impression: Fun, reasonably cheap, healthy dining at its best. They don’t shy away from spices and seasonings, and these versions of various Mediterranean dishes are very good facsimiles.

Takeaway: The food is spot on, but the sound track needs more cowbell.

3 thoughts on “Breakfast, Lunch and Two Dinners at SLS”