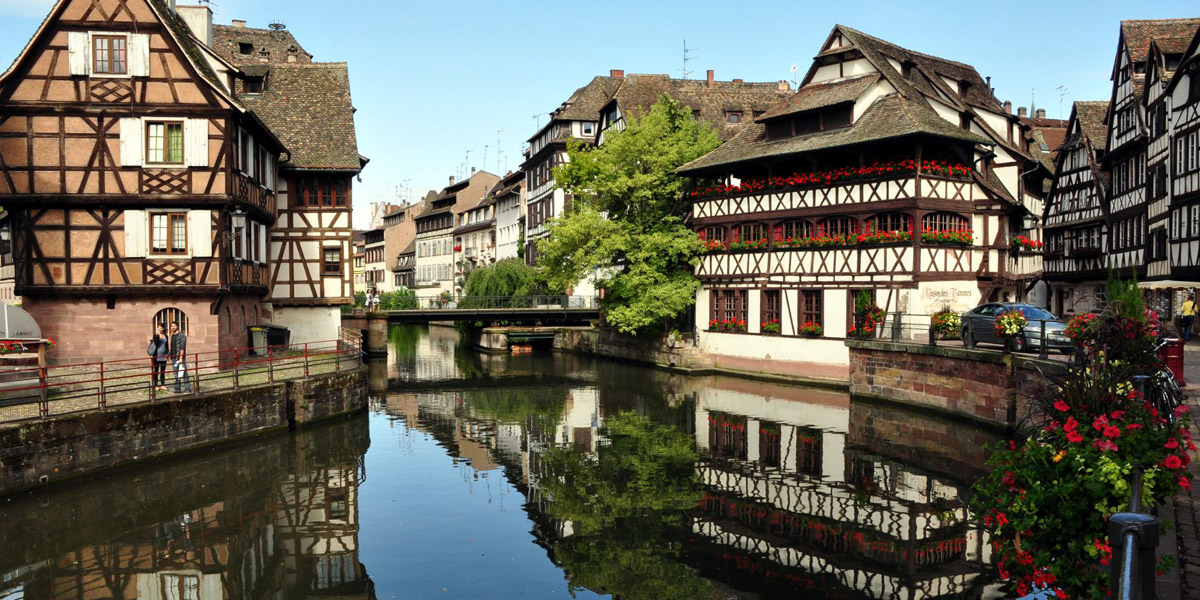 It is impossible not to fall in love with Alsace. Once you see it for the first time, resistance is futile. Once you taste and drink its many delights, stroll its cobblestone streets and walk amongst the candy-colored, half-timbered houses, you might as well resign yourself to a life-long love affair with Franco-German France. Alsace is a region, but it is also a culture; a battle-born civilization of freedoms hard won, peoples cross-pollinated and gastronomic traditions firmly entrenched. It also happens to be one of the most delicious places to eat and drink on the planet.

Alsace is also a place of contradictions, and more than a little schizophrenia. Wars have been fought for centuries over this fertile farmland. Germany — never a bashful sort when it comes to staking a claim — has always considered the Vosges Mountains to be the natural border between it and France. The French — by nature more accommodating — have always maintained that the Rhine river is nature’s way of separating the two countries, and besides, they say, we like our white wines fuller, more aromatic and alcoholic than you do. So, to each his own choucroute. (These differences in taste — which are taken very seriously in these parts — have thus been the basis for those little dust-ups known as the Franco-Prussian War of 1870, WWI and WWII, or at least that’s the way I like to think about it.)

As a result of changing hands — between two countries of very different personalities, not to mention sauerkraut — five times in eighty years, there is a certain split personality in Alsace that I find just glorious. Call it Teutonic efficiency mixed with Frenc joie de vivre, if you will, but never, ever make the mistake of calling anyone there German, even though they all have names like Klein, Becker or Weinbach. “We are French!” they will say — proudly, in French, with a German accent — and they will scowl (in that friendly/bemused French way) if you dare suggest that a spätlese Riesling from the Mosel is even in the same league as a Grand Cru Tokay Pinot Gris. And don’t even think about comparing the charcuterie of the two countries in polite company.

I like to think of Alsace as very very French with a few German accents, and from the gingerbread architecture to the love of white wine to the gingerbread itself, you can revel in the similarities while enjoying the differences. All of which you can drink in when you are strolling the streets of Strasbourg.

You begin in Strasbourg, of course, because it is both the capital of Alsace and the gateway to the wine country. But this international city is also a gastronomic gem in its own right. The best place to start your Alsatian education is in the Petite France section of the old city, and the best place to stay when doing so in Le Bouclier d’Or — a 4-star hotel perched right on the edge of all sorts of gastronomic delights. Turn to your right as you exit and you will find yourself right in the heart of the most picturesque part of the city; turn a gauche and you’ll be on a street filled with shops featuring all sorts of local delights, from the great cheeses of Alsace (Tomme, Cantal and Munster) to the local pain d-epice or nougat, baked into giant loaves weighing as much as a cinder block:

(The Food Gal® tried to eat the whole thing.)

Cross the canal that circles the old part of the city, and walk a few blocks, and you’ll find yourself smack dab in front Au Pont Corbeau: a locals’ favorite for its cuisine Alsacienne and wine list chock full of small, local producers at gentle prices. Just like Alsatians, we eschew the avant garde when we’re here, opting for choucroute garni and tripes a la mode, both of which were as soul-satisfying and of-their-place as food can get.

(Contrary to what you might think, tripes a la mode does not come with ice cream.)

After lunch, it’s best to do walk around, do some shopping, take in a museum, and visit the Strasbourg Cathedral — with its single spire (the tallest in the world until 1874) and the technological marvel that is its astronomical clock. The clock is really more of a primitive calculating machine than a clock, but it’s 18 meter height, intricate beauty and advanced, 19th Century technology make it a wonder of artistry and engineering.

If all that sightseeing doesn’t make you hungry, I guarantee that stroll down the rue de Orfevres will. Here you will find the upscale Frick-Lutz, and various other traiteurs, confectioners and sellers of Alsace specialties. The regional delight not to be missed is foie d’oie (fwa-dwa): silky, delicate, almost pink-hued goose liver, more refined than the earthier, amber-colored duck livers you find in America, and to our taste, more compelling. If gazing upon a black truffle-studded loaf of this food for the gods doesn’t make you hungry, then I suggest you retire to the ascetic monastery from whence you came.

By now it should be getting close to dinnertime. You can pop into almost any restaurant in the Petite France quartier and be assured of having a good meal of local specialties (there’s even a few newer places popping up with menus that hint of young chefs spreading their wings, e.g., 1741, Umami), but traveling to Strasbourg in search of the cutting-edge is like going to the Royal Philharmonic for some Philip Glass. Where we like to get a healthy dose of old Alsacienne is at L’Ancienne Douane, whose name literally translates to “Restaurant at the Old Customs,”  located as it is in an ancient structure that dates to 1401. Located directly on the canal, L’Ancienne is the perfect place to while away a summer’s day watching the boats go by as you tuck into hearty platters of  Jarret Gratiné — a knuckle of ham with grated Munster cheese that’s the size of a small football — or a Tête de Veau Sauce Ravigote (veal head):

(One could lose their head over this dish.)

Speaking of football, the choucroute here — garnished as it is with six separate meats including two types of bacon and 3 different sausages — could defeat an NFL linebacker. In chillier seasons, the cozy, wood-paneled dining rooms are the perfect places drink in the local atmosphere, and sip on the local wines, all of which are served in those gorgeous, green-stemmed glasses that I’m an absolute sucker for.

But man does not live by choucroute alone, and a couple of days in Strasbourg means a chance to revisit the gastronomic institution that is Au Crocodile — a restaurant that hasn’t lost its fastball, no matter what the Michelin Guide says.

This venerable establishment, which held three Michelin starts between 1989-2002, no longer holds any, much to the chagrin of its former chef/owner Emile Jung, who compared the loss of a star to “…a pain that eats at our hearts and that has killed our spirits,” when he was demoted to a two-star establishment in 2002. He sold the place to chef Phillipe Bohrer in 2010, and all we can decipher from a Google translation of this article is that Bohrer, like Alain Senderens at Lucas-Carton in Paris and others, has decided not to play the Michelin game anymore,  preferring instead to cook food his way, without constant fretting over Frette linens or other frippery — details  that must be fussed over if the coveted stars are to be maintained.

Michelin inspectors are famous for their fussiness, and more recently, their trendiness, so Au Crocodile’s decidedly old-school charm might cost it a few points, but there’s nothing overtly stuffy about the food or the service.  The service was warm and welcoming, and the food was a point and all you could hope for in a fine French meal: gorgeous foie d’oie, roasted lobster with coral butter served with a fricasse of vegetables, and a Pigeon de la ferme “Théo Kieffer” that was La Cuisine Français in all of its subtle-yet-intense glory.

Being no stranger to Michelin starred establishments, we left our meal here scratching our head. If this place doesn’t merit at least a star, then something is amiss in the world’s most respected food guide. Regardless, if this is what no-star cuisine tastes like in France, then we could die happy eating nothing but. Bully for you, Monsieur Bohrer. Stay the course and keep on cooking, and we’ll keep on coming to Strasbourg.