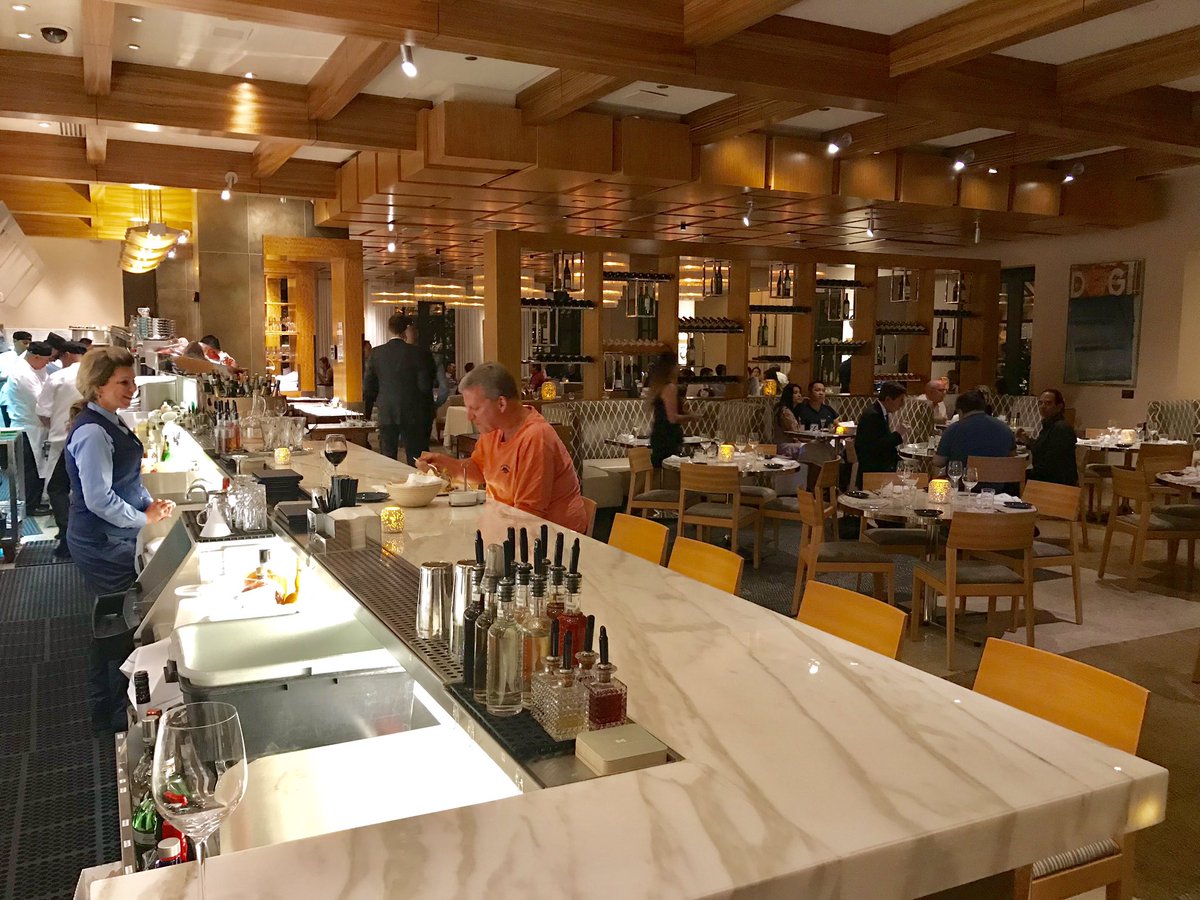 I almost sued Michael Mina once. More accurately, Michael Mina’s partners tried to hire me to sue him.

My law firm wanted me to take the case, but I demurred because….well….simply because I liked his restaurant so much.

The underpinnings of that suit had to do with the divorce that was then underway between the Bellagio and the Aqua Group — the company (and restaurant) that launched Mina’s career in San Francisco in the mid-1990s. By 1997, Aqua had become Frisco’s most famous seafood restaurant, and Steve Wynn (who had already lured Julian Serrano here from there), needed a seafood star to complete his murderer’s row of chefs at the Bellagio.

Aqua Las Vegas opened to great acclaim in 1998 (as did all of Bellagio’s stars), and for 7 years it was the unchallenged cooking champion of all things from the sea. As its eighth birthday approached, deals were coming to an end and leases needed re-negotiating. Mina apparently wasn’t in step with whatever his partners wanted, and that’s when both sides started lawyering up and I got the call.

I don’t know anything else about the dispute except that within a matter of months, Aqua was out and Michael Mina (the chef and the restaurant) was in.

Smartest move me and the Bellagio ever made.

Aside from a drift away from the seafood that made him famous, not a lot has changed at Michael Mina over the years. It’s always been one of the prettiest restaurants in Vegas (you can thank designer Tony Chi for that) with lighting that flatters both the customers and the food. The one design flaw was the bar to the left as you enter. Originally designed as a sushi bar, it was small and awkward and not conducive to cocktails (or a pre-prandial glass of vino) — with the drinks (formerly) being handed down over a high ledge in front of the seats. As you can see above, this is no longer a problem.

Neither is the menu re-vamp, which returns Michael Mina (the restaurant) to its roots. With this re-boot, the fish-friendly MM of yore is now alive and swimming in the Bellagio Conservatory. Taking a clue from Estiatorio Milos, a seafood display tempts as you are led past the bar, and if looking at whole branzino, John Dory, striped bass, Hawaiian kampachi and Arctic char doesn’t put you in the mood for a fish fry, nothing will. 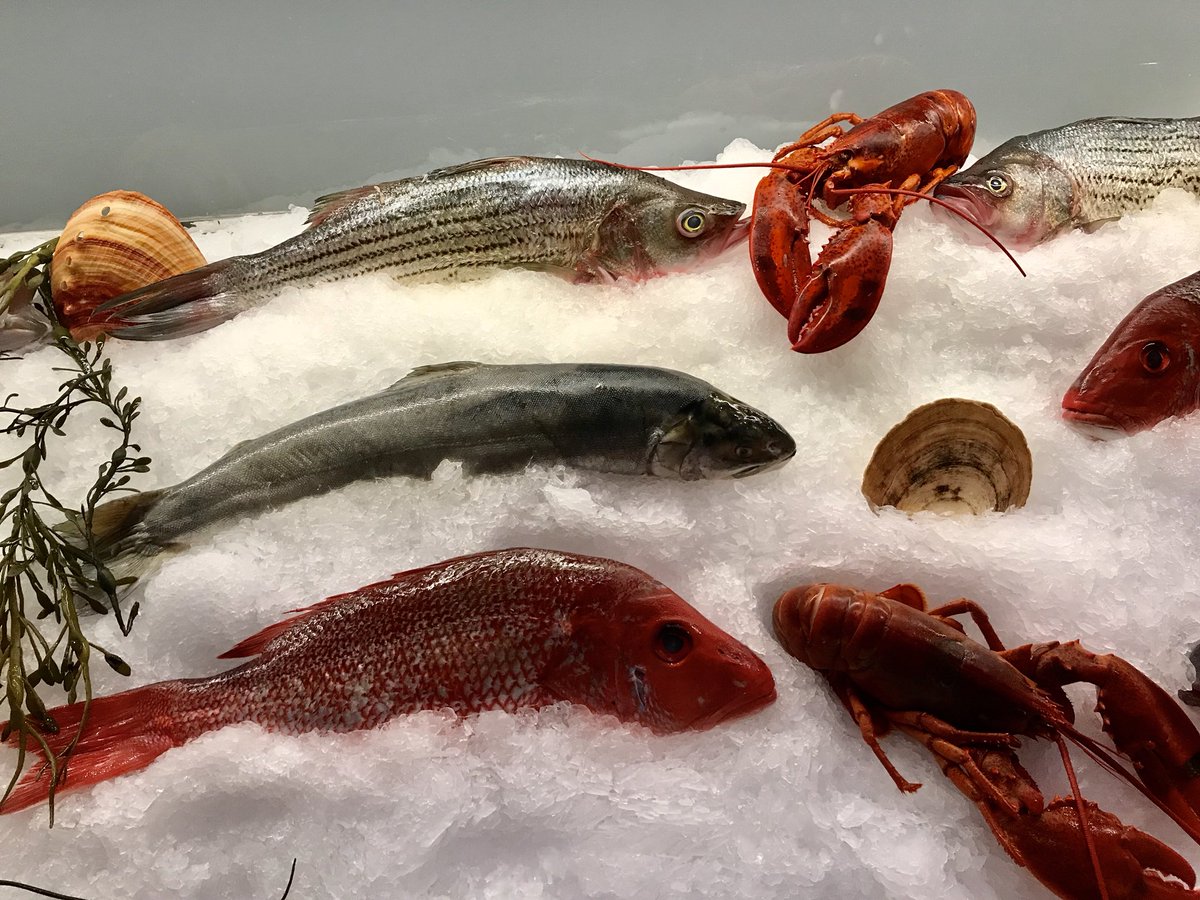 Mina made his name as a seafood chef. His early fame came from treating big hunks of pristine fish like land-locked proteins. He popularized pairing pinot noir wine sauce with salmon, and pairing tuna with foie gras. Even now, he and his crew see marine proteins as umami-rich sea meat, rather than delicate flowers to be barely trifled with.  Where the Italians and Greeks barely dress their seafood with anything more than a squeeze of lemon, and the French nap theirs with the barest of butter, Mina looks at a fish as something to be assaulted (in a good way) with sauces. Thus does lobster come bathed in brandy and cream (in his ethereal pot pie), while fresh-off-the-boat John Dory gets a dressing of intense, fermented black beans and bok choy. In keeping with the times, things have lightened up a bit — the only French sauce offered is the mustard beurre blanc with the phyllow-crusted sole, but he can’t resisted coating a strongly-smoked trout with a river of Meyer lemon-caviar cream,  His chefs will grill one those whole fish (or a half for 1-2 diners) and adorn it with grilled peppers and preserved oranges, or accent it with Thai green-coconut curry after deep-frying it Asian-style.

When it comes to fish, yours truly is something of a seafood snob (imagine that?). My rules of thumb when ordering a whole fish are simple:

The John Dory is an exquisite fish – thick and meaty, but also delicate, not-too fatty and finely-grained. There is a firmness to the meat which will stand up to all sorts of preparations, but a soft sweetness to it that demands a careful hand. It goes well with a variety of sauces, and will stand up to strong accents — like the scallions, Serrano peppers and fermented black bean treatment it gets here. When properly cooked, it takes a rightful place in my pantheon of perfect pisces, along with wild turbot, fresh-caught Pomapno, and true Dover sole. 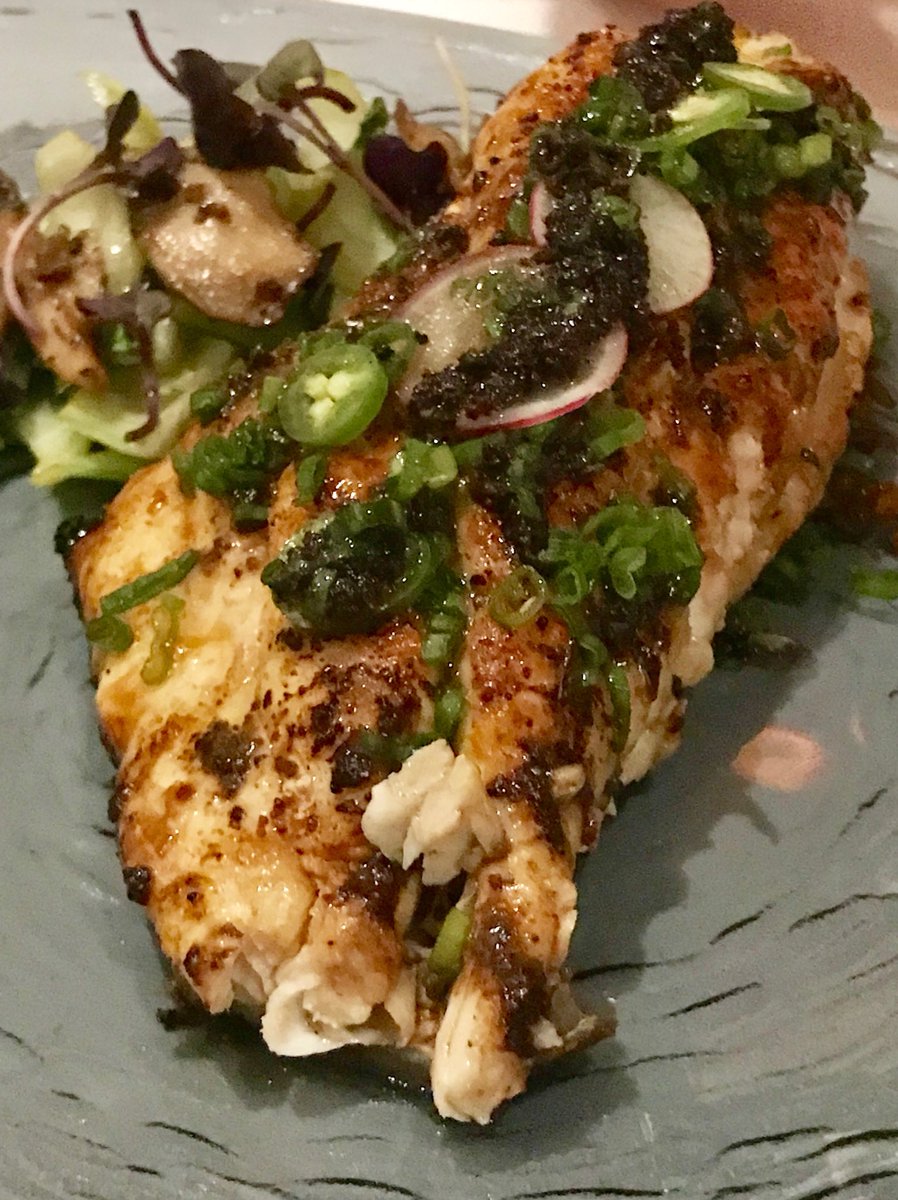 Rule #2 is: Only eat fish in a fish restaurant.

Rule #3: In a fish restaurant as good as this one, either close your eyes, point and pick, or ask the knowledgeable staff about the variations in species and how they are complimented by the cooking styles.

That last one is crucial, because on any given night, 6-8 whole fish are laid out before you, each begging to be grilled/smoked over applewood, broiled and beaned, or deep-fried with coconut-green curry. The lighter-fleshed fish (snapper, sea and striped bass) do well with this spicy coating and sauce, while the denser Dory, kampachi and char demand to be basically broiled.

Before you get to them, however, you’ll have to navigate the shellfish waters, which are teeming with terrific options. Executive Chef Nicholas Sharpe pointed us to the “petite charcoal-grilled platter” ($130) which is more than enough for four. Nothing against the brisk and briny oysters and cold lobster you find all over town, but this time of year calls for warmth, and grilling the scallops, oysters and Maine lobster with a miso-garlic-yuzu glaze is just the ticket on a brisk fall evening:

The only problem with the new menu is there are too many great choices. Sharpe and g.m. Jorge Pagani (who’s been with the operation for 17 years) suggest toggling back and forth between the Mina classics (caviar parfait, tuna tartare, hamachi crudo), with these new (“Market Light”) items to build your best meal, and that sounded like a sound plan to me.

Speaking of classics, most of them are still there. (Pagani told me there’d be a revolt among some regular customers if the tartare, parfait, pot pie, or phyllo-wrapped sole were taken off the menu.) And why should they be? They’re classics for a reason. There may be no better starting course on earth than Mina’s caviar parfait: 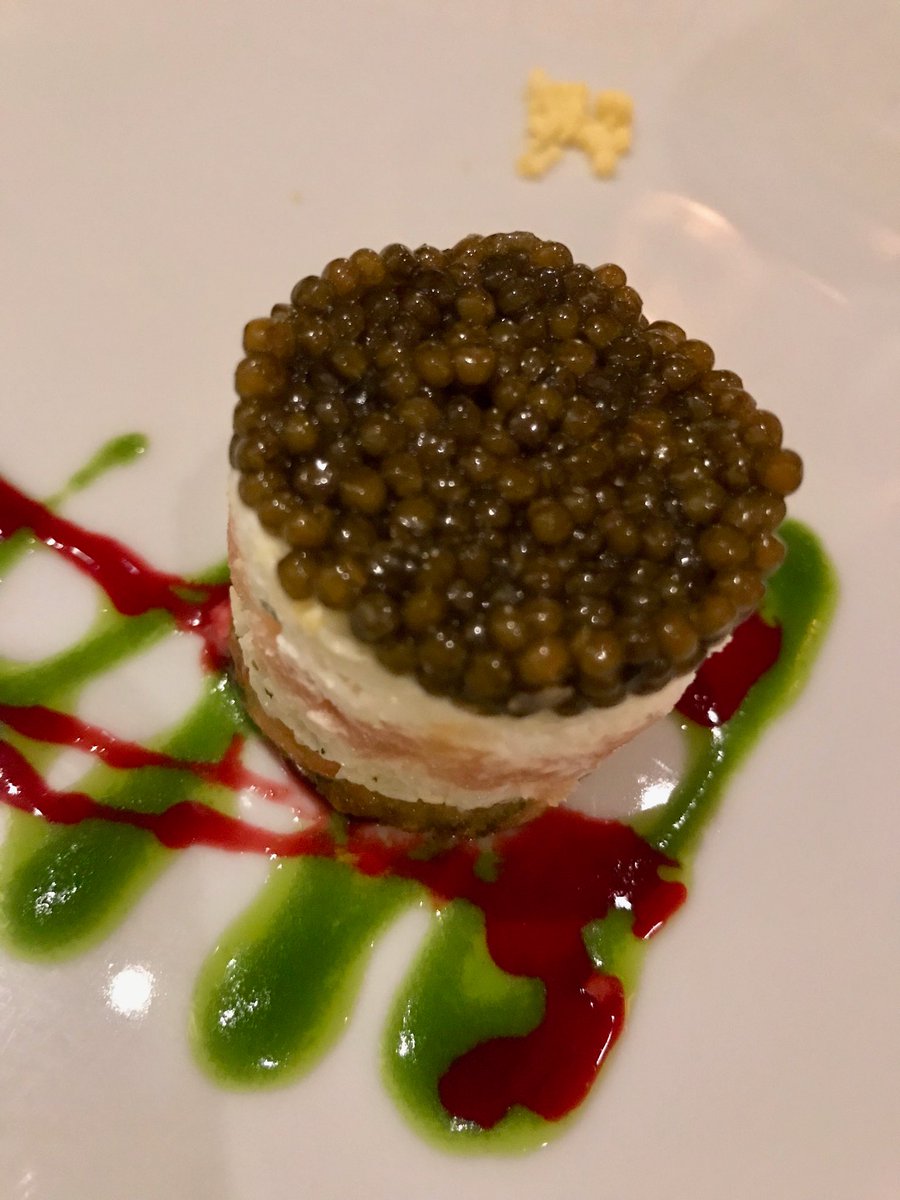 ….and even his steak Rossini is justifiably famous,. But for my money, the real show-stopper (a blend of Mina’s oeuvre, old and new) is his seared tuna and foie gras starter: 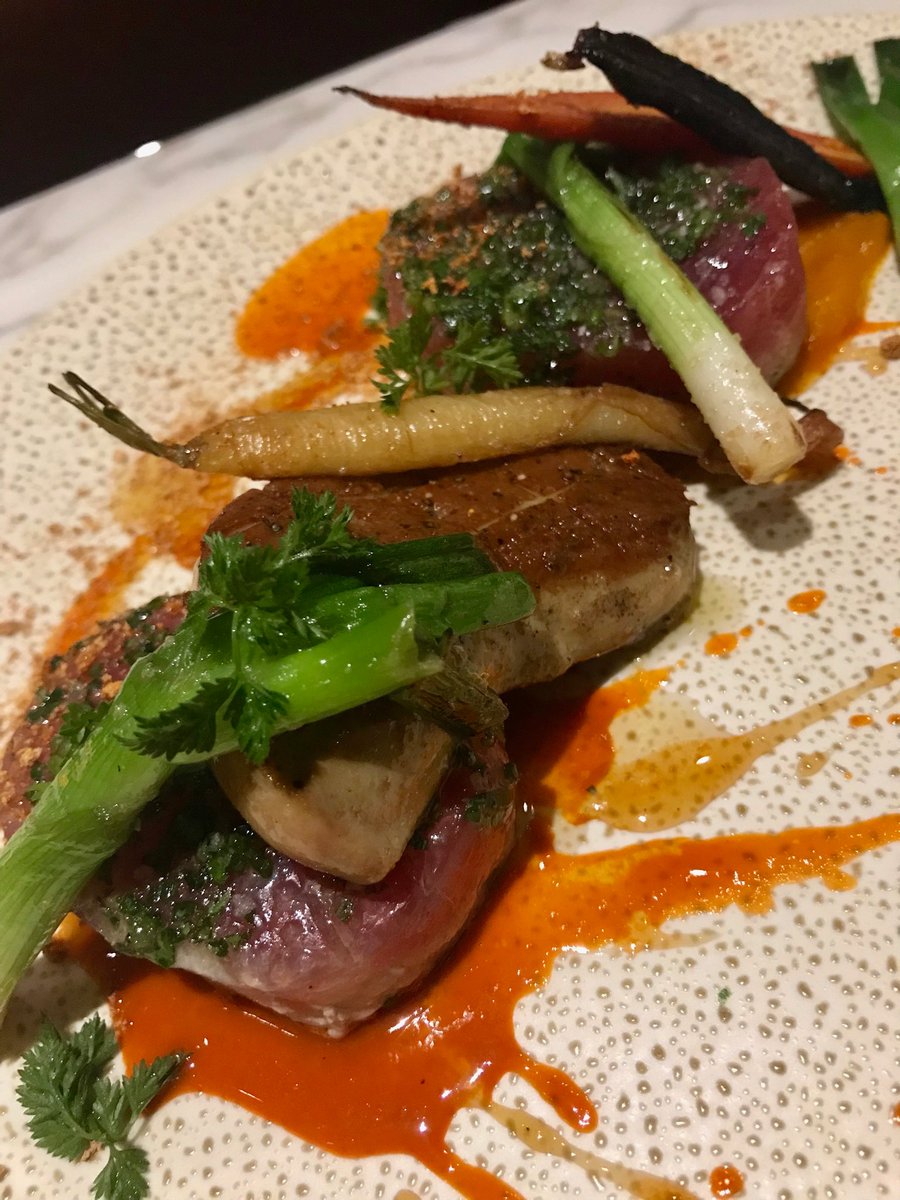 If you have room after all that seafood-y goodness, don’t miss the classic chocolate bar with salted caramel mousse, or the Egyptian rice pudding (almost as good as Greek!), or the pineapple granita with vanilla panna cotta and Sicilian pistachios (below). Desserts here have been wonderful for as long as I can remember (which is all the way back to 1998), and as with the fish, whatever you point to will be worth it. 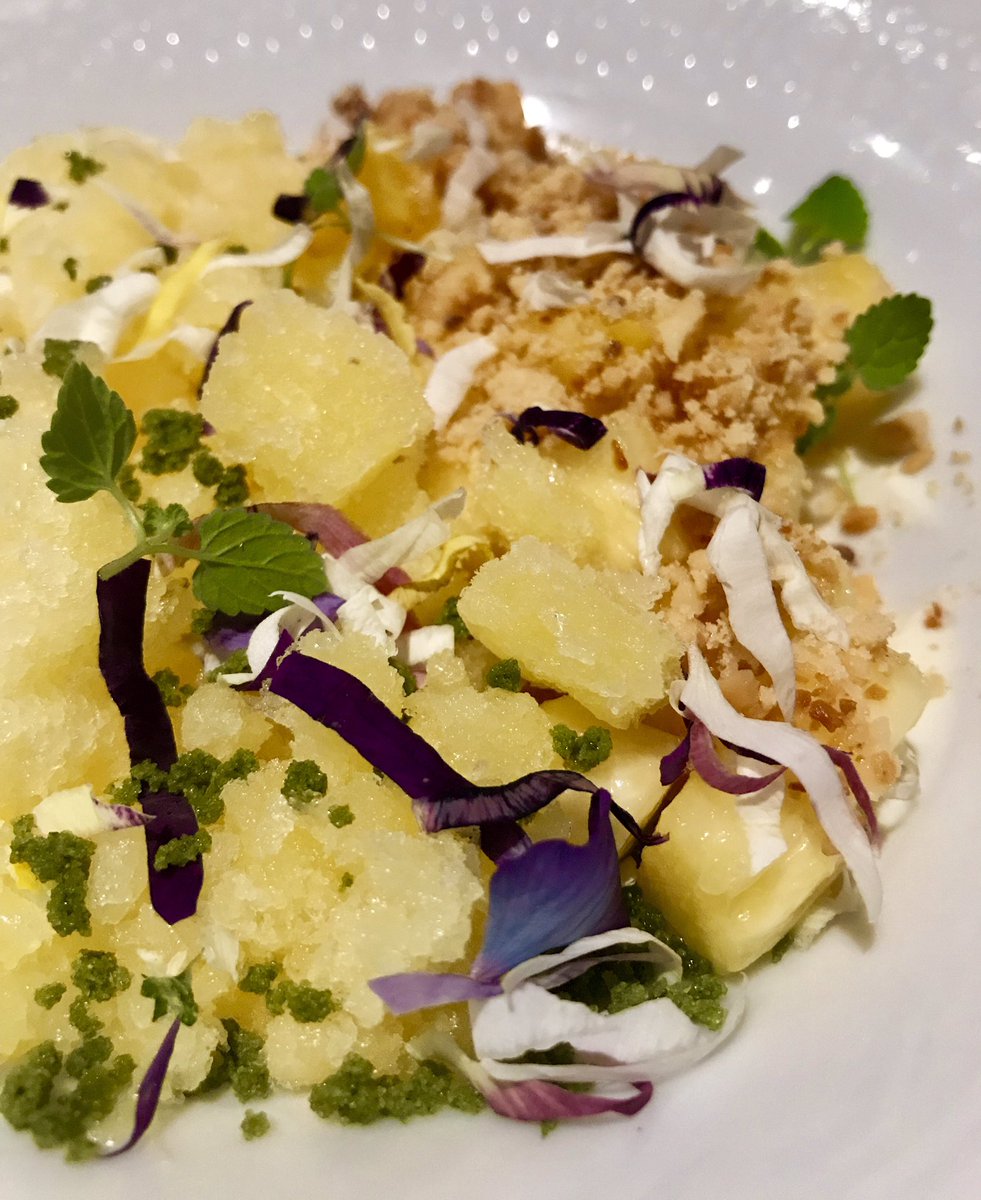 A word about wine. No one goes to the Bellagio looking for wine bargains, but this list is well-chosen with lots of white wines at (for the Strip at least) reasonable prices that match well with the food. My sweet spot when looking at Strip wine lists is the $60-$120 range, and if you root around, you’ll find a few German Rieslings that fit the bill — like Müller-Catoir Kabinett for $80. The bright acidity of drier German whites compliments Mina’s love of bold, rich flavors, as do the more mineral-rich Chablis and less-complex (read: cheaper) white Burgundies — which you’ll find more than a few bottles of that don’t break the bank. Anyone who orders a Cali cab with this food ought to be taken out and shot (figuratively speaking).

The half-fish here run around $60-$75, which is a (relative) bargain. Most of the whole fish (that easily feed four) are double that. If you split some appetizers and go this route, you can get out of here for around $100/pp. Tasting menus are $138 and $188, respectively, and are more than worth it if you’re the “go big or go home” type. The last time I paid for a meal at MM, Bill Clinton was president.