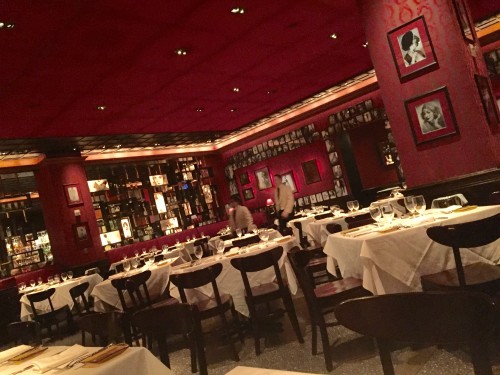 I have a confession to make. I love steak. And steakhouses. I love them both more than I should. In fact, steakhouses are my second favorite form of food (after French bistros), and I could pretty much eat in one every night of the week if my cardiologist, my wife and my waistline didn’t stop me.

My father loved steak too. In fact, it was he who first created my fascination with steak way back in the 1960s when he would always take my mother to a place called Freddie’s Steak House on Highway 17-92 in Central Florida. (We children never got to go to Freddies, thereby imbuing it (in our pre-teen minds) with a mythical reputation — a restaurant Xanadu, if you will —  fit only for grownups in skinny ties, big cars and beehives.) Sometime in the  mid-60s, Dad further piqued my interest by taking the family to Bern’s Steakhouse in Tampa, Florida where the dense brocade furniture, flocked wallpaper, private rooms, and clubby feel made an awkward, pimplified teenager feel like he was entering the world of Diamond Jim Brady.

My first job was at a steakhouse. At a chain called Steak & Ale, where I set some kind of record for being the world’s worst waiter. Between general un-coordination, an overly chatty disposition, and zero interest in playing the dog-eat-dog game of fighting with other waiters for tables, my tenure at this early entry into the world of franchised eateries was mercifully short.

But I always loved the food, and the clubbiness, and the wine lists, and the American testosterone that good steakhouses ooze with every pour.

Las Vegas is blessed with great steakhouses. In fact, only New York City beats us with their beef. Don’t bother to argue. No other city in America has more than one or two great steakhouses. We have a dozen; New York even more. And since the Big Apple pretty much invented the genre, we’ll concede the crown to them.

All of which is by way of introducing two great steaks I’ve had recently that both got my attention.

One was this mind-blowing porterhouse at CUT:

Dry-aged 40 days, dense, slightly-gamey, bursting with roasted undertones of beefiness and top-notes of mineral goodness, it was fork-droppingly good, with just the right amount of chew and char.

I expected a good steak (like you always get at CUT), I didn’t expect one of the best steaks of my life. But that’s what I got: 34 oz of beef so intense and flavorful that I can still taste it. It’s a splurge to be sure, but one that can easily be split four ways….unless you’re dining with linebackers.

Almost as good in a different way is the pepper-encrusted strip steak at Strip House:

By different we mean a thick char of a pepper-dense crust that hits you with mini-explosions of piquancy with every chomp. There’s a fair amount of chew to it (as there tends to be with good sirloin), but the sweetness of the beef and the bite of those peppers is a marriage for the food gods.

Strip House is a tough sell — to locals anyway — since it’s tucked deep in a corner of Planet Hollywood: the most annoying and inaccessible hotel and casino in Vegas (to locals anyway). PH has the world’s worst valet, an unfathomable circular mall that you must circumnavigate to get to the restaurant, and the smell of a bordello. All will be forgiven and forgotten once you get one bite of Dustin Rixey’s food, but it’s hard to blame anyone for giving up before they get there.

But take it from a steak lover of the first magnitude, pilgrim:

….pack a bag, get a compass, hire a Sherpa guide and hold your nose (to block out that piped-in, cheap perfume, casino smell) and you won’t regret for one bite your decision to dine there. Because the sides, like this out-of-this-world Potatoes Romanoff:

…are every bit the equal of the steaks. Which is really saying something.

I’m thinking even A. J. Curtas (1926-2006) — the man who taught me to love steakhouses so much — would tuck right in to everything, just like his son, while feeling mighty darn good about being so in love with the most quintessential of American restaurants.

In the Palazzo Hotel and Casino

In Planet Hollywood Hotel and Casino