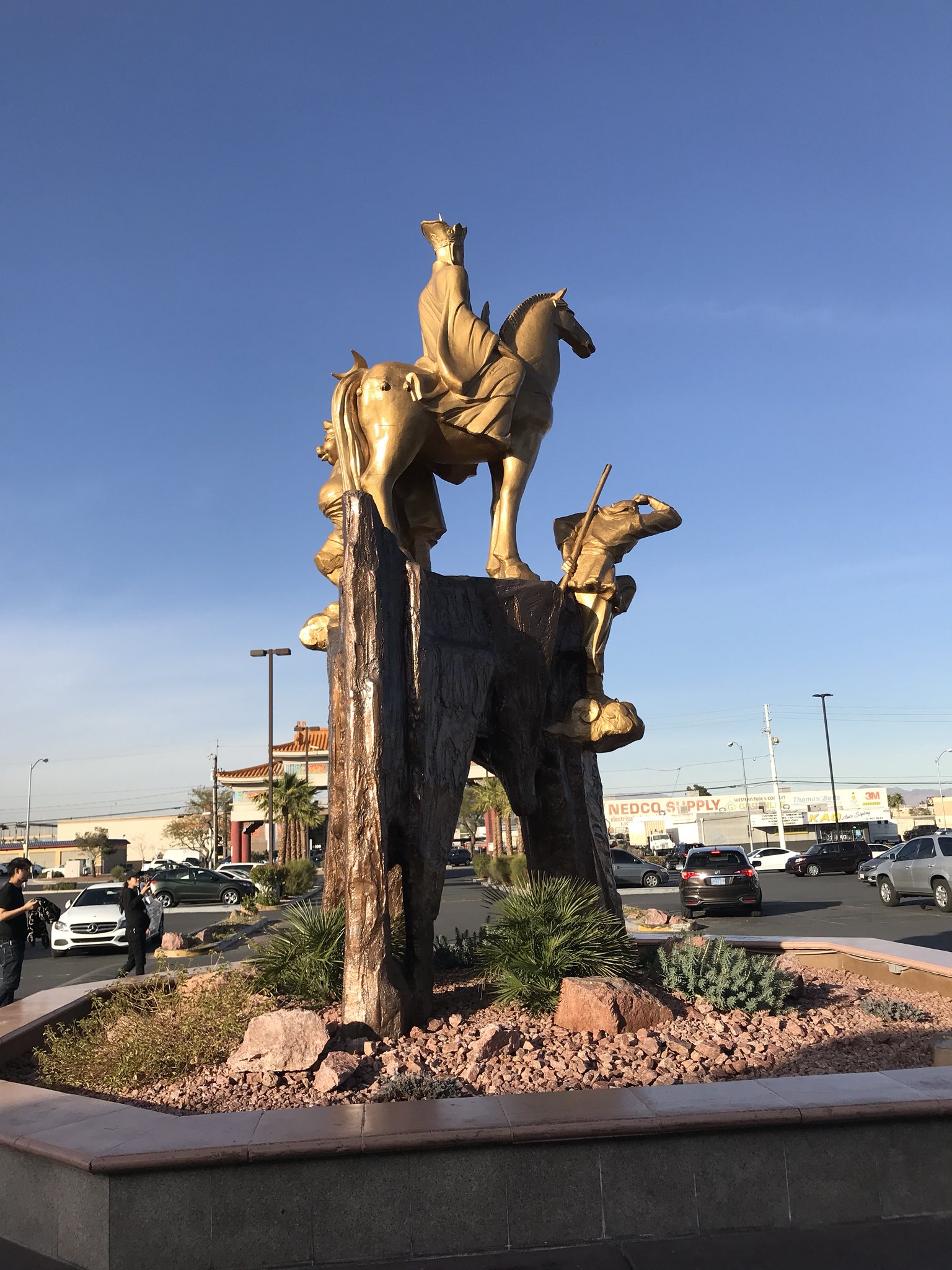 (ELV has been to Chinatown so much, they really should erect a statue in his honor)

ELV note: Rather than attempt a comprehensive look at Las Vegas restaurants (for that, you’ll have to buy my  book) we at ELV thought it better to let you know where you’re likely to find us dining in the coming months. As we said in our last post, we are done exploring every nook and cranny of the local food scene. We’re not going to ignore the shiny and the new, but more likely you’ll find us patronizing the well-worn and comfortable.  And nothing fits our comfort zone more these days than Chinatown.

Why the last two? Because they provide more flavor to our humble burg than all the gueros and gaijin combined.

Las Vegas’s Mexicans restaurants don’t compare with SoCal, Phoenix, Tucson and Albuquerque, but all it takes is a quick trip to any Mexicali eatery in Atlanta or St. Louis to see how good we’ve got it.

And when it comes to Asian food, there are very few cities in America that compare with the offerings up and down Spring Mountain Road.

As with Mexican food, I can hear the aficionados braying: “Nothing you have compares with the San Gabriel Valley, or Garden Grove, or Richmond (outside of Vancouver) Canada!”

True dat, but for a town our size, the quality and variety of our Thai, Chinese, Japanese, Vietnamese and Korean restaurants is pretty darn impressive, and beats anything Miami, Chicago, Minneapolis, Denver or Philadelphia can throw at you.

Best of all, our Chinatown (which really should be called Asiatown) is mostly compressed into one, three mile stretch of road. (As tasty as it is, traipsing all over Alhambra, San Gabriel and the Valley Boulevard Corridor can be a slog for all but the most intrepid gastronaut.)

Chinatown really rings our chimes, again and again. It’s the one food address in town that we never tire of exploring. When Thai tedium ensues, there’s always some copious Korean. Should we be sated by sushi, there’s always some restorative ramen at hand. Upscale Vietnamese? Verily, it is so. Interesting izakaya? Indubitably.

Plus, all of this bounty seems to be increasing. As we type these words, a huge condominium complex is under construction near Valley View Boulevard, along with a giant new shopping mall (dubbed “Shanghai Plaza”) a half mile up the street.

Something tells us the quantity and quality of Chinatown eats is about to grow exponentially. In the meantime, here’s where we’ll frequenting in the coming year:

(We have purposely included a few non-Chinatown addresses here, but lumped them in this section in the interest of pan-Pacific consistency.)

(“Screaming For Vengeance” at Ramen Sora)

No one does cheap eats better than Asians.  Ten years ago there was nary a noodle to be found in Chinatown that wasn’t in a pot of Vietnamese pho. Now, nourishing noodle nibbling necessitates numerous navigations. Put another way, the number of choices is notable. And without a whole lot of negotiating, you can become a noodle-noshing nerd. 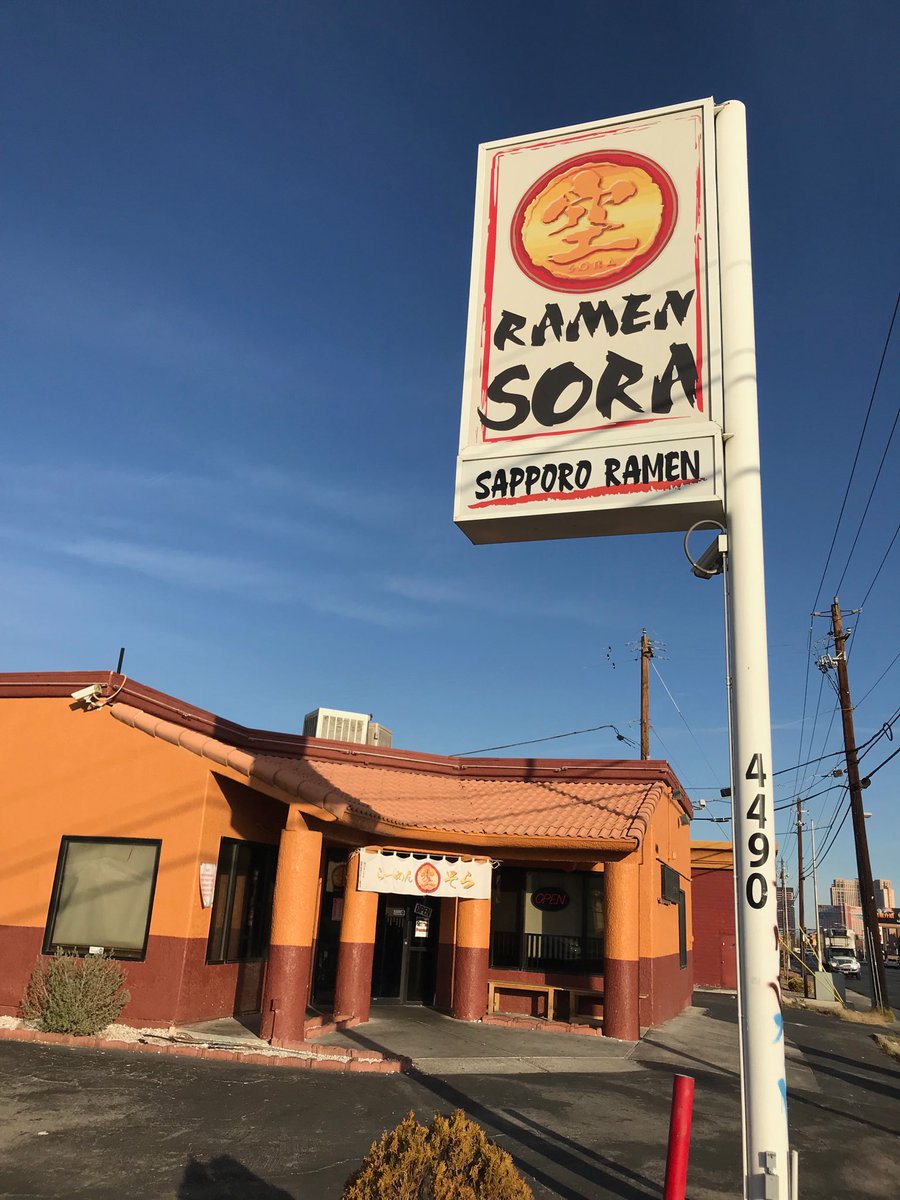 For ramen, we prefer an old reliable — Ramen Sora — along with an interesting upstart: Ramen Hashi, a mile or so up the road. Ramen Sora satisfies our cravings for miso-based noodles (often with everything but the kitchen sink thrown on top), while Ramen Hashi has blown us away recently with its lighter, shio (salt) and shoyu (soy) based chicken broths. We have nothing against Monta, and give it all the props in the world for pioneering our ramen revolution, but Hashi and Sora are just as good, and never quite as crowded.

For unctuous udon,  Marugame Monzo fills the bill with its thick, chewy strands of cotton-white udon (and killer karaage). And for the best of Szechuan, nothing beats Mian Taste (or Mian Sichuan Noodle, depending on how literal you want to be) and the fiery, lip numbing intensity of the Szechuan peppercorns that infuse each dish.

Life is too short to eat cheap fish. It sounds elitist (and it is!) but you should have to pay through the nose for your seafood. Nasty, shit-fed, farm raised fish doesn’t do anyone any good, and ocean trawling for cheap tuna is destroying our eco-systems.

My solution: Ban cheap fish altogether and make people shell out a car payment for their sushi. It’s going to come to this eventually, so we might as well start now.

If you want cheap protein, eat a chicken.

If you want wonderful seafood treated right, try this on for size: 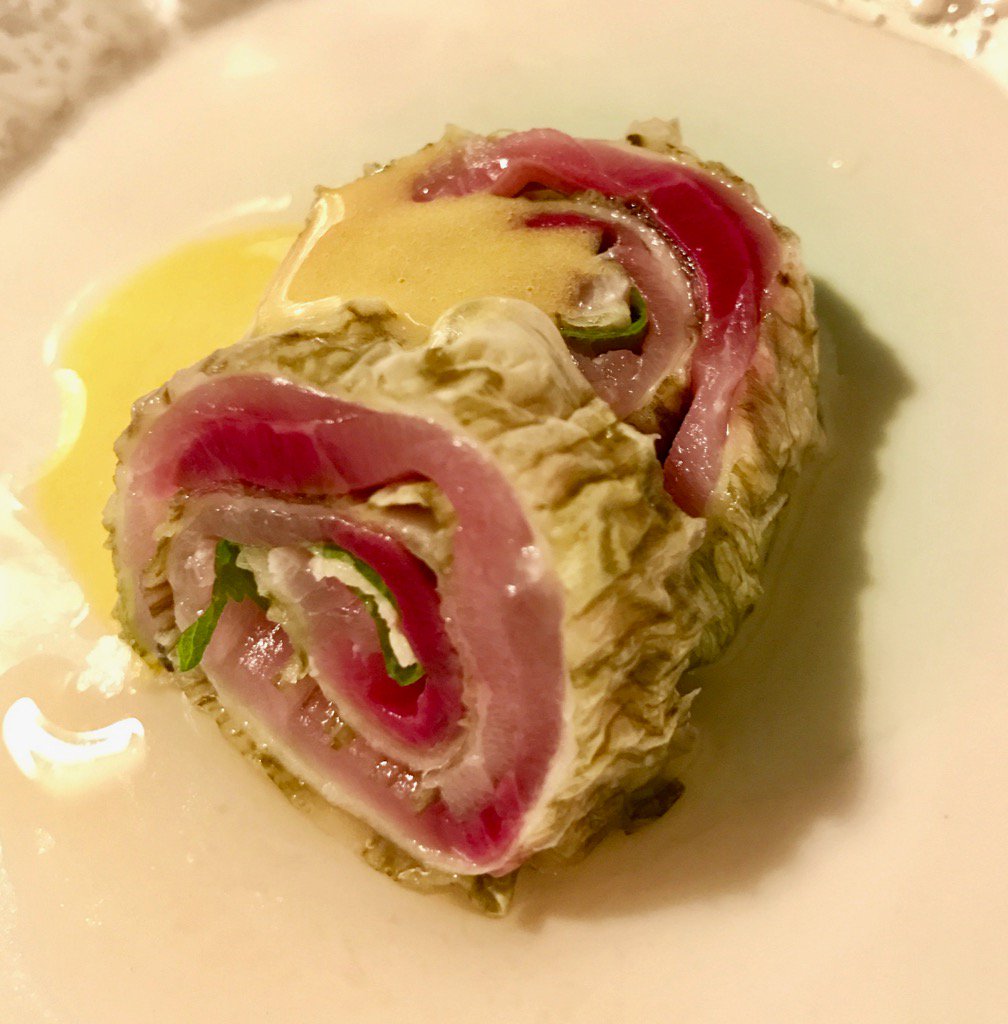 Why do I have to keep telling you these things?

More Meals of the Rising Sun

The Japanese revolution began in January, 2008 with the opening of Raku. We hear an expansion is planned and we hope that means it will be easier to get into. (Don’t bet on it; it’s still one tough ticket.) Raku’s excellence and popularity shows no signs of abating, as it has continues to elevate our dining scene, and set a standard for all of Spring Mountain Road to emulate.  In the ten years hence, it has begat such tasty options as Japanese Curry Zen and Raku Sweets. Curry Zen is a must for lovers of Japanese curry. Its spinach curry rice shows up at my house at least once a month (the Food Ga®  is a big fan of their takeout), and it might be the healthiest cheap eats in Vegas. Raku Sweets remains a marvel. We can never get in for dessert (always a wait) but weekend lunch is definitely on the horizon.

Gawd I wish I could parse the fine differences between this pho parlor and that pho parlor. They all have the same menu and they’re all alike to this haolie. All I know is this: When I get a hankerin’ for pho or spring rolls downtown, I head straight to Le Pho. When I want more interesting, out-of-the-box Vietnamese, I head straight to District One. I really don’t give a shit about any other Vietnamese restaurant in town, because I’ve been to ’em all, and they all taste the same.

Last year we did a Korean ‘cue quest. This year we’ve decided to hang out at 8 Oz Korean Steakhouse.

When the mood for more homey Korean fare hits, you’ll find us at Mother’s Korean Grill or Kkulmat Korean Kitchen.

We don’t give a flying frijole that Kkulmat has only 2 TripAdvisor reviews. It’s really really good, and the people are really really nice. At Mother’s, they barely seem to tolerate round-eyes, but the banchan and dolsot bibimbap make up for the cursory service.

Don’t Leave Your Chinese To Chance

(Let Jimmy Li slip you the tongue at Niu-Gu)

Chinese restaurants still outnumber all others on Spring Mountain, and mediocre Chinese restaurants are more the rule than the exception.  The Chinatown Plaza pictured at the top of the page – the place that started our Asian  revolution in 1995 – is chock full of mediocrity, and every strip mall seems to have at least one forgettable boba tea or Taiwanese street food joint. But there is fascinating food to be found. You just have to be smart, read this blog, follow me on Instagram, and buy my book. (That’s two shameless plugs in one post if you’re counting.)

For dim sum, and many other classic Chinese favorites, head straight to Ping Pang Pong. For sophisticated Mandarin-worthy fare at a fraction of what you’ll pay on the Strip, nobody beats what Jimmy Li cooks up every night at the unassuming Niu-Gu Noodle House. (P.s. the tea service is spectacular as well.)

Chengdu Taste is where we head when we’ve got a hankerin’ for dan dan mian, green sauce chicken, or boiled fish in chili sauce. It is a restaurant that brooks no compromise and lays on the tongue-numbing heat the way they do in southwestern China. J & J Szechuan is older, less flashy, and not as of-the-moment as chef Tony Xu’s Alhambra offshoot — but it’s almost as good, even cheaper, and usually easier to get into.

(Our usual at Ocha Thai)

We group our Thai restaurants into 3 categories:

When it comes to rustic and authentic, nothing beats what the adorable little ladies of Ocha Thai are turning out. A little more polished are the operations at Weera Thai (which features quite a few Laotian dishes) and the incendiary stylings of Chuchote Thai. If you want to know what it feels like to have a flame thrower stuck up your fundament, ask for anything “Bangkok hot” at any of them, and then hold on for dear life the next morning.

Thai comes in more sophisticated form (and with better wines) at Chada Street and Chada Thai as well as at that old reliable: Lotus of Siam. We’ve twice tried to get into Lotus at their new location on West Flamingo, and have been thwarted by long lines every time. At this rate, we may have to wait for their old location to reopen for our yearly fix of Koong Char Num Pla (raw shrimp) and Nam Kao Tod (crispy rice), or to get another chance to waltz around America’s best German Riesling list.

What do we always say: When you want a good dessert in an Asian restaurant, go to a French one.

That said, there’s no denying the gorgeousness of Bank Atcharawan’s milkshakes (above) at The Patio Desserts and Drinks, or his Thai toast:

….or just about any other thing he’s serving to satiate your sweet (or tea) tooth.

Other than that, and the gorgeous creations of Mio-san at Raku Sweets: 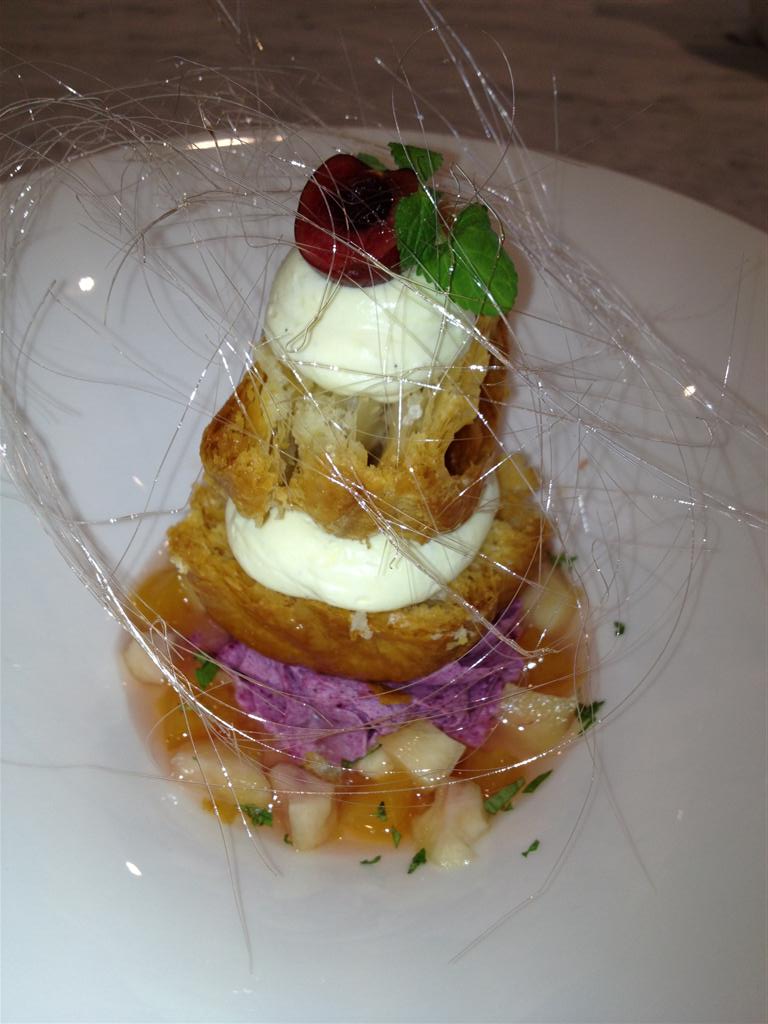 …there’s not a whole lot we can recommend from our Asian brethren in the dessert department.

Boba tea is a bad joke (it all comes from over-sugared mixes), Korean pastries are pale, spongy copies of French ones, and the wallpaper paste that the Japanese and Chinese make out of red beans might appeal to them, but we find its best usage is holding down roof tiles. And those slushies that some upscale Thai, Vietnamese and Chinese joints throw at you at the end of the meal are just odd, chunky imitations of something the Greeks perfected 2,500 years ago.

Face it: Asians don’t get sugar. Not like the French do. Or the Italians. Or the Germans. They don’t really have a sweet tooth. But we don’t hold that against them. In fact, it’s one of the many reasons we crawl up and down Spring Mountain Road every week — we always know that wherever we chow down on this most chow-downable of streets, we’ll save ourselves a thousand calories by skipping dessert every time.

In Part 3 of Where I’ll Dine in 2018 we will explore what’s left of Strip dining that still gets us excited. In the meantime, we’ll leave you with some thoughtful words from George Orwell about critical writing and the abandonment of standards. (He was writing about book critics, but the regression to the mean (and mediocrity) holds true for restaurants and restaurant writing as well.):

It is almost impossible to mention restaurants in bulk without grossly overpraising the great majority of them. Until one has some kind of professional relationship with restaurants, one does not discover how bad the majority of them are. In much more than nine cases out of ten the only objectively truthful criticism would be “This restaurant is worthless”, while the truth about the reviewer’s own reaction would probably be “This restaurant does not interest me in any way, and I would not write about it unless I were paid to.” But the public will not pay to read that kind of thing. Why should they? They want some kind of guide to the restaurants they are asked to visit, and they want some kind of evaluation. But as soon as values are mentioned, standards collapse. – with apologies to George Orwell