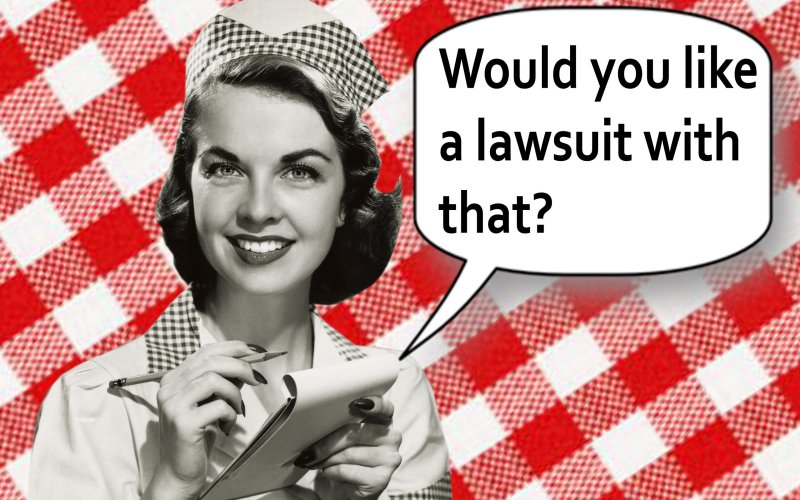 Back in the 1980s, I had a client. She was a cocktail waitress on the Strip. As I recall, she was a pretty brunette in her early 30s, divorced, and with a small child. She was referred to me by another lawyer who didn’t think she had much of a case.

When she came to my office she acted shy and quiet, barely speaking above a whisper. The whole time she sat across from me she acted like she was embarrassed about something.

At first I thought she was there with a workman’s compensation case. I thought this because the first thing she did was roll up one of her sleeves to show me the bruises on her upper arm.

“It looked worse a few days ago,” she told me. “It happened over a week ago.”

“My boss grabbed me and tried to have sex with me.” She was quivering as she said this, eight days after the incident.

“Where did this happen?”

“In his office,” she replied, “where he takes all the girls he wants to have sex with.”

“He’s the vice president of food and beverage.”

“For the whole hotel?”

“Yes. I don’t want to lose my job, but he shouldn’t have done this.”

“Did he do anything else to you other than grab you by the arm?”

“Yes…as I twisted away from his grip, he reached out with his other hand and grabbed my boob and ripped my dressed as I was pulling away from him.”

With that, she reached into a large bag she had with her and produced a short, torn cocktail server dress with the upper quarter of it ripped open.

Then, with her next statement, we both got embarrassed.

“Do you want to see it,” she murmured almost inaudibly.

I knew what she was talking about but had to ask. “See what?”

It was difficult for both of us, but she showed me the inside of her breast with three short scratches and a fading bruise. It looked like someone had tried to twist her her breast off.

“Did you tell anyone at the time this happened?”

“Yes, I told my shift supervisor.”

“She told me to forget about it if I wanted to keep my job.”

Long story short, she eventually quit, claiming sexual harassment. We sued on those grounds as well as assault and battery. The hotel fought tooth and nail, and the case eventually settled…for $15,000.

As I’ve said many a time over the years, if this case had happened two decades later, we could’ve added two zeros to the settlement. As it was, both the hotel and its attorneys continually scoffed at the claim. “All he did, at the very worst, was make a pass at her,” was their contention. The ripped dress was a fake and the bruises on her arm could’ve come from anywhere. The fact that she immediately told her supervisor bothered them not at all. “So her boss got a little out of line. What’s the big deal?”

To some youngsters, 1986 seems like the 1800s, but to those of us of a certain age, it wasn’t that long ago. And America was hardly in the dark ages about sexual harassment in the Eighties — it had been a hot topic, both legally and socially, for at least twenty years.

But Vegas took no heed of that. Las Vegas, then and now, plays by its own rules. And those rules begin and end with the fact that whatever blue-collar, unskilled job you have, you should be damn grateful to have it. Better still, you, the employee should never forget that if you move back to Fresno or Little Rock, you’ll be holding down the same job for about 60% less money.

The same holds true for our hotel executives. To a man (and woman) they know that no where else in America can they make the same, six-figure income, managing a bunch of maids, dealers and bookkeepers. And the big bosses — the guys with the high six-figure/seven-figure incomes — know that they know this, so all of them create a tight little bubble of economic security that no one wants to puncture.

Low level employees are expendable. Hot young masseuses, manicurists, waitresses are a dime a dozen. Use ’em up and spit ’em out. When one makes waves, circle the wagons and wait for it to pass. (And waiting for it to pass is what Steve Wynn is doing right now.)

And pass it does. I know one well-known executive (who has worked in at least half a dozen hotels in town), who was fired from two of his jobs because he couldn’t keep his hands off the cocktail waitresses. Nevertheless, whenever a new hotel is in the works (as many were ten-fifteen years ago) this fellow’s name kept popping up as a F&B executive. “Un-friggin-believable,” I would always say to myself….but then I would look up and there he was, strutting around the new hotel like a little Caesar with his monogrammed shirts and fuck-you Italian shoes.

The culture that allows this to go on all over Vegas is endemic to Vegas. It is unique in that we’re a town built upon the seven deadly sins. Our pleasure palaces depend upon all sorts of vices: sex, drugs, and rock & roll are what sells this town. Take away the drugs (I’m including booze when I say drugs), and the glitz and  the easy women and what do you have? Fremont Street in 1936: a dusty old western outpost with a dozen seedy gambling halls.

But dusty old gambling parlors do not support six-figure lifestyles and fuck-you Italian loafers. We need glitz and glamour and an endless supply of young. eager, compliant, blue collar employees to constantly polish and enhance our image. Managing so many uneducated folks ain’t easy, and if a casino boss wants to partake of these vices and take a few liberties, who does it harm? (Or at least that’s the thinking among the powers that be….even if they won’t admit it.)

Look no further than John L. Smith’s “Running Scared — The Life and Treacherous Times of Las Vegas Casino King Steve Wynn” — an exposé on the rise of Wynn that paints in horrifying detail his use of his executives to procure a ready supply of young women (mostly employees) for his sexual gratification. It was published in 1995, and the only eyebrows it raised were among the press. What horrified them was his ensuing libel lawsuit against Smith and the publisher — cases that were eventually tossed out of court. Wynn may have lost that battle, but he won the war. From that point forward, the sexual peccadilloes of Vegas big shots were off limits. And for twenty-plus years, the public didn’t give a shit, either.

It’s one thing when sex in the workplace is a fair fight (e.g. among the restaurant crowd with their after-hours partying and musical beds*), quite another when someone risks a valuable job in a big hotel by calling out a rich and powerful boss, especially one with his name on the building. Complicating things are the willing or semi-willing females (or males, I suppose) who go along with sexual overtures to get ahead. Or at least get along.

But my guess is that the ones who do mind outnumber the ones who don’t by 10 to 1. Everyone in Las Vegas has a story, but precious few will ever spill the beans, because Mr. Gucci will always be making $400,000 a year, and, no matter how bruised your psyche or dented your flesh, fifteen grand only goes so far.

*When the Mario Batali scandal hit, in early December, I made the observation on social media that people get into the restaurant business precisely because it’s a hotbed of social/sexual activities. (As one manager once told me, “It’s like a never-ending frat party you can continue well into your thirties.”) The morality police jumped all over me, accusing me of “hating restaurant workers” and “condoning sexual harassment.” The difference is, of course, that the groping and grabbing (and language and philandering) among  young people is an even economic match. What happens after-hours among restaurant staffs  is a far cry from Steve Wynn patrolling the halls of his hotel, looking for more notches on his belt.