“Quit angling your way into restaurants so you can ogle hostesses and drink for free.”

Someone even bent their logic so they could criticize me for my supposed insufficient support of the #metoo movement. Ahhh, the internet.

This was to be expected. The provocative title ensured offense to at least some readers, and the clickbait picture was (literally) the icing on my cake of bad taste.

But if you read the article (and you have half a brain in your head), perhaps you sensed the tone as jaded and wistful, not crude and disgusted. I wasn’t so much condemning the restaurants of Las Vegas as I was mourning days gone by, when my ardor was keen and my pulse quickened at the thought of new restaurant mountains to climb.

Yes, I analogized new eating experiences with sexual adventures (and bemoaned how enthusiasm for both can wane as one ages), but the disappointments mostly come from within. I am bored with the restaurants of Las Vegas because I’ve eaten in everyone of them dozens of times. No one else on earth can make this claim, so pardon me if all my experiences have caused me to look at the Las Vegas Strip the way a sultan does when he’s (a bit) tired of his harem. It doesn’t mean I don’t love or admire them anymore, but neither do my loins quiver at the mere thought  of approaching their supple charms.

With these thoughts in mind, I thought a “Where I’ll Dine in 2018” post was in order. Note the solipsistic title. This post is going to be about where you’ll find me in 2018, not where I think you should go. There are dozens of places all over town I highly recommend (e.g. Michael Mina, Jaleo, Julian Serrano, Delmonico, CUT, just to name a few) but that I’ve been to so many times I’m not sure I ever need to go back.

(If you want to read about every restaurant I recommend, you can buy the 2018 edition of EATING LAS VEGAS – The 52 Essential Restaurants by clicking here.)

But no longer am I going to scour the town, looking for every new discovery, or trying to beat out other writers with restaurant scoops and scores. I am through eating at places because I think (or an editor thinks) I should review them because they’re new, or hot or popular. That doesn’t mean I won’t review new or hot or popular places, but I’m only going to comment on them if I think they’re worth my time and calories. Nothing Gordon Ramsay does interests me (except his steakhouse), and Giada could invite me to dine in  the nude with her and I’d take a pass. (Fooling myself? YOU BET!)

But there are places that don’t bore me, that still cause a tingle in my nethers, and that I still look forward to going to, even for the 15th time. So here they are: 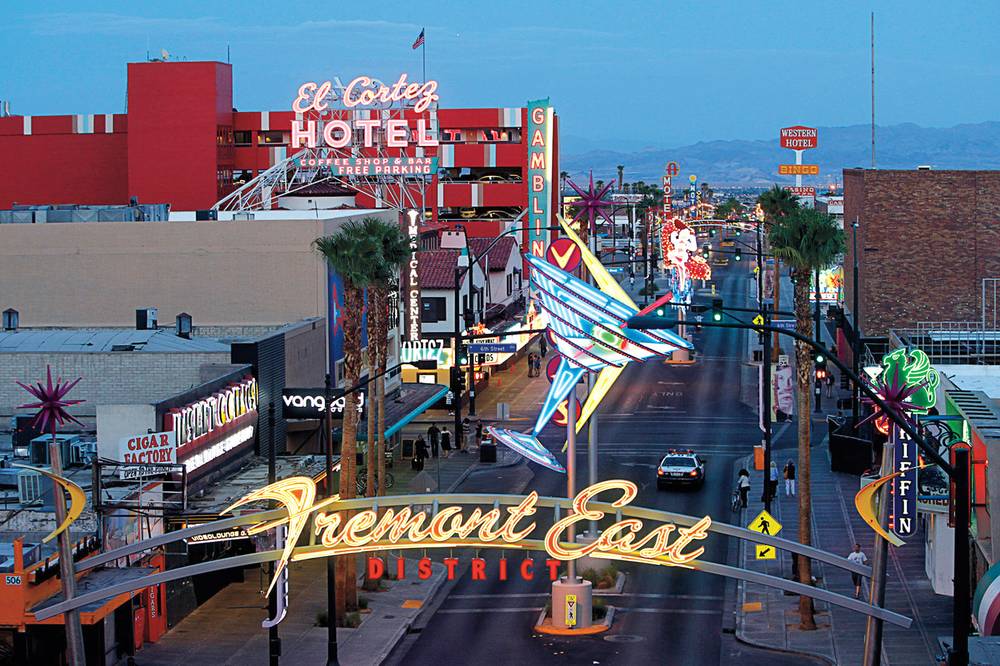 Downtown is my hood. I live and work there. Have for decades now. I used to say that downtown was seven taco parlors in search of an audience, but things have changed. I still love Irma Aquirre’s al pastor and frijoles at El Sombrero, and am long overdue for a return visit. But the news downtown these days is how the gastro-pubs have taken off. A year ago I thought nothing could challenge Carson Kitchen for elevated bar grub hegemony, but the stuff being put out by Gregg Fortunato at 7th & Carson goes roasted beet to roasted beet with anything CK is slinging. Right there with them is Justin Kingsley Hall’s new menu at The Kitchen at Atomic. He’s making everything from barley with blood sausage to crispy rabbit sing at this hipster haunt on East Fremont, and after only a couple of months at the stoves has made this a must-stop on any foodie tour. It’s kind of weird to us how this restaurant can attract such a different crowd from the hipster booze hounds next door at Atomic Liquors, but attract it has, and expect to read a lot more about the splash Hall’s cooking is making in the coming months.

Speaking of splashes, no place has ever made bigger waves from the get-go than Esther’s Kitchen. James Trees is doing everything but grinding his own flour at this ode to Italy, and his bread and pastas and pizzas are not to be missed. (The salads are also amazing as well.) Put it all together with a stylish bar, and an interesting wine list, and you have a game-changer on south Main Street.

When I’m not in a gastro-pubby mood, you can always find me enjoying a carnitas por dos at Casa Don Juan, or a gut-busting pasty at Cornish Pasty Co.. I don’t drink as much beer as I used to, but the selection at Cornish is top notch.

And then, of course, there are the old reliables: Oscar’s Beef Booze and Broads for steaks and a killer happy hour, La Comida for flights of tequila fancy, Le Pho for pho-nomenal Vietnamese, Ocha Thai for terrific, rustic Thai, and the newly launched outpost of  Flock & Fowl when the craving for Hainanese chicken rice hits.

Ah the ‘burbs. Bucking the tide, swimming upstream, and fighting the current of Las Vegas’s constant race to the bottom of the restaurant pond. Between greedy and clueless landlords, an indifferent public, and economic realities of the restaurant business, it’s a wonder we have anything but Cheesecake Factories to feed us in the neighborhoods.

God bless those chefs who take the plunge into this stacked deck (how’s that for a mixed metaphor!), because without them, I’d probably move to Albuquerque. And god bless my favorite wine hangout, because on any weekend, you’re likely to find me on the patio at Marche Bacchus, sipping Burgundy and trying to figure out a way to piss off the idiots who rely on Thrillist for their food recommendations.

When I’m in the mood for superior (and healthy) French,  EATT always fills the bill. More and more I’m less and less impressed with Green Valley (pretty amazing, I know, since I’ve held it in the lowest esteem since…..1984), and its addiction to franchised food shows no sign of abating. If I find myself hungry in that neck of the woods, there’s now only two places I will even consider are Boteco for it’s cool, Spain-meets-America wine bar vibe, and Prosecco Italian Kitchen for its classic, whole Dover sole. That, or I head over to Valley Cheese & Wine and throw myself upon the mercy of Bob and Kristin Howald for a slice of prosciutto.

The Southwest part of town seems to be where the action’s at these days, and Elia Authentic Greek Taverna is everything its name says. A bit farther down the road (and a pain-in-the-ass to get to from my house) is Andre’s Bistro & Bar — where the bistro fare is always solid. Equally inconvenient is Japaneiro, but Kevin Chong’s boffo beef and inspired uni will inspire a road trip at least once in the next twelve months.

Breakfast gets its own category because breakfast in Las Vegas is almost, across the board atrocious. (I’m talking about the ‘burbs here. ) Unless you love the straight-from-a-freezer bag slop served up by the Hash House A Go-Gos of the world, you are pretty much consigned to the bad eggs pun entrants like Egg & I, Crepe Expectations and the like — none of whom cook anything from scratch except the GMO eggs they break.

Downtown weighs in against this morass of mediocrity with EAT (also in Summerlin) where the food is fresh and the cooks care about what they’re feeding you. On the Strip, Bouchon remains a favorite, as does Morel’s French Steakhouse & Bistro. Bouchon’s nonpareil baked goods are more than worth the aggravation it takes to get to them, and the Dungeness crab Benedict and turkey hash at Morel’s will blow the socks off of any breakfast snob you take there.

But as we’re always fond of saying, “Breakfast is good for only one thing: thinking about lunch.” We are foursquare against a big, hearty breakfast because it always interferes with our lunch plans. That’s why we love eating early the French way, and in Las Vegas, it doesn’t get anymore French than, Cafe Breizh and Delices Gourmands French Bakery. One is close to the regal confines of the Curtas manse, while the other is too friggin’ far for us to frequent, but both put out the best pastries and breads in town, bar none.

On the rare occasions when we want to go big before going home, there’s only one option: Jewish food. Canter’s Deli Jewish food, to be precise. As a certifiable, actually circumcised, almost Jew, I can attest to the primacy of its pastrami and the copiousness of its corned beef. The bagels and cream cheese taste straight from Fairfax Avenue, too. And if you don’t get that reference, it’s time to turn in your yarmulke.

Other than that, you’re on your own when it comes to breaking your fast. Other towns like Portland and Austin have vibrant breakfast scenes — early bird joints where chefs love to strut their stuff with various egg, meat and pastry dishes. In Vegas, there’s a line out the door at Claim Jumper (in the most affluent part of town) every morning. Go figure.

In Part Two of Where I’ll Dine in 2018, we’ll explore our favorite Chinatown haunts, and take a mournful look at the Strip.