Without Italians we would have no pizza; no opera, no Joe DiMaggio.

Fiorella La Guardia? How would you get to New York without him?

And let’s face it: much of the worst of our popular culture begins and ends in Little Italy. Frankie Avalon: Italian; Mike “The Situation” Sorrentino: really Italian; overuse of the word fuck: so fucking Italian it fucking hurts.

Without any of these, you must admit, the world would be a better place. No Italy, no Sonny Bono. I rest my case

But these are minor quibbles. In the great scheme of things, Italy and Italians have been at the heart of advancing western culture for two thousand years. From Cicero to Galileo to Enrico Fermi, our arts and sciences have been enriched by Italians. Where would art be without Michelangelo, or music without Jerry Vale?

Italians may have a slightly inflated view of themselves, but on the whole, their pride, at least in Europe, is justified.

The trouble with Italy isn’t Italians; it’s with Italian-Americans.

More specifically, what they’ve done to the food of this great nation, when they decided to move over here en masse around 120 years ago. Because for every beautifully composed carpaccio you find in America today, there are football fields of baked ziti; for every bottle of Chianti Classio, an ocean of Gallo Hearty Burgundy is drunk. What Italian-Americans have done to pasta is criminal, and what they do to salad and chicken (like putting chicken on salad) should be grounds for an en masse deportation.

Italian-Americans take a certain perverse pride in perverting their cuisine (and then shouting from the rooftops how “fucking awesome” it is). The crimes against nature they commit in thousands of Italian restaurants in America daily are too numerous to count, but for every Rao’s, Carbone or Buddy V’s out there trying to elevate American-Italian classics, there are, at any given moment, 10,000 cooks pouring a quart of canned sauce onto a half pound of overcooked pasta and smothering it with Sysco cheese, all to the ohs and ahs of its goomba-loving audience.

In spite of twenty years of refinement, publicity and a quest for authenticity by chefs, food magazines, and home cooks alike  — bad Italian food still rules the roost in this country. And its popularity shows no sign of abating.

Exhibit One: The Italian American Club.

Possessing all the charm of a church basement, the furnishings of a convention hall, and the comfort of an Elk’s Lodge, this ode to ersatz Eye-talian packs a crowd in nightly that seems quite content with the fare. So who am I to argue?

I will however point out a few things to a few of you that might make you think twice before showing up.

Those chairs you sit in will be straight from that church basement. The crowd is so old it makes Piero’s look like the Encore Beach Club. The music (from a non-stop, not-untalented crooner) comes straight from the Perry Como school of somnambulant listening, and the art on the walls (should it catch your eye) will remind you of pictures that once did the same thing on a street corner.

Of course, calling anyplace called The Italian-American Club “old school” is like calling Mussolini a bit of a hot-headed, fascist dictator. It’s like calling Sophia Loren a gal with a nice figure, or a Lamborghini a two-door sedan.

The circumstantial evidence says it all, and the food says it louder than anything. 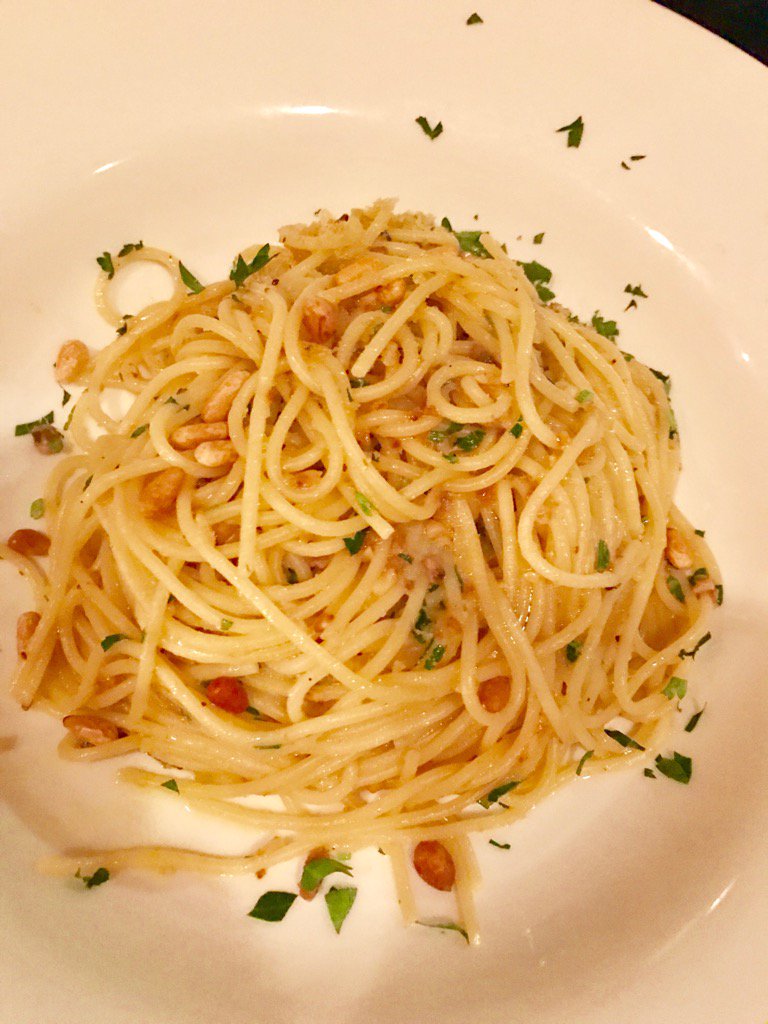 Old school salads taste of white lettuce and bottled dressing. The butters come in three shades of tasteless margarine; the veal Marsala tastes of veal but not Marsala; and the aglio e oglio pasta (pictured above) tastes only of burnt garlic. In old school Italian-American restaurants, you’re not supposed to notice these things. In old school Italian-American restaurants, everyone is too busy filling up on cheap starches and proteins to give a shit, and the owner is too busy counting his cash to care.

On the plus side, I’d eat here again in a heartbeat over Piero’s, so there’s that.

My mother still makes me a dish (occasionally) from my childhood that I love. It consists of ketchup combined with brown sugar, poured over pork chops upon which a lemon slice or two has been placed. She then bakes the whole thing to death in a 400 degree oven for an hour until the chops are like shoe leather and the lemons have shriveled into tart chewy circles of sourness. The whole thing is quite the culinary massacre but I love it. It reminds me of sitting at our kitchen table in Winter Park, Florida and feeling the cool linoleum beneath our feet while the whole family hunches over dinner in 1965 on a hot Sunday night. I know this recipe is terrible but I love it to this day. The trouble with Italian-American restaurants is that they  based an entire cuisine on such atrocities, and then seduced an entire country of white-bread/unseasoned meatloaf/pot roast loving Protestants to buy into it. What little taste and imagination this food might’ve once had (Tomatoes! Garlic! Olive oil! Herbs!) has been so co-opted by bad restaurateurs, and so diluted over the past hundred years that the iconic dishes are now little more than pentimenti of what was once noble and delicious.

Of course nothing is preventing the cooks from doing these classics right. Done right they’re some of the most toothsome recipes on the planet. But doing them right is not what bad Italian restaurants are about. Doing them cheaply and shoveling the slop to a bunch of customers conditioned to accept these short cuts (because anything beats tuna-noodle casserole and a jello mold), is what created this lousy genre.

White lettuce and burnt garlic never killed anyone, of course, and if no one complains, nothing is ever going to change. In America, for the last half of the 20th Century and the first 16 years of this one, nobody’s complaining. Except Italians from Italy, of course, and anyone who cares about what they eat.

P.S. For those of you who want to read more on this subject (and discover that I’m not just pulling some of these fucking theories out of my fucking ass) I recommend you to read John Mariani’s How Italian Food Conquered the World, and John Dickie’s Delizia! – The History of Italians and Their Food. Certain Italian-Americans won’t bother, I’m sure, preferring instead to think of me simply as a fucking asshole.