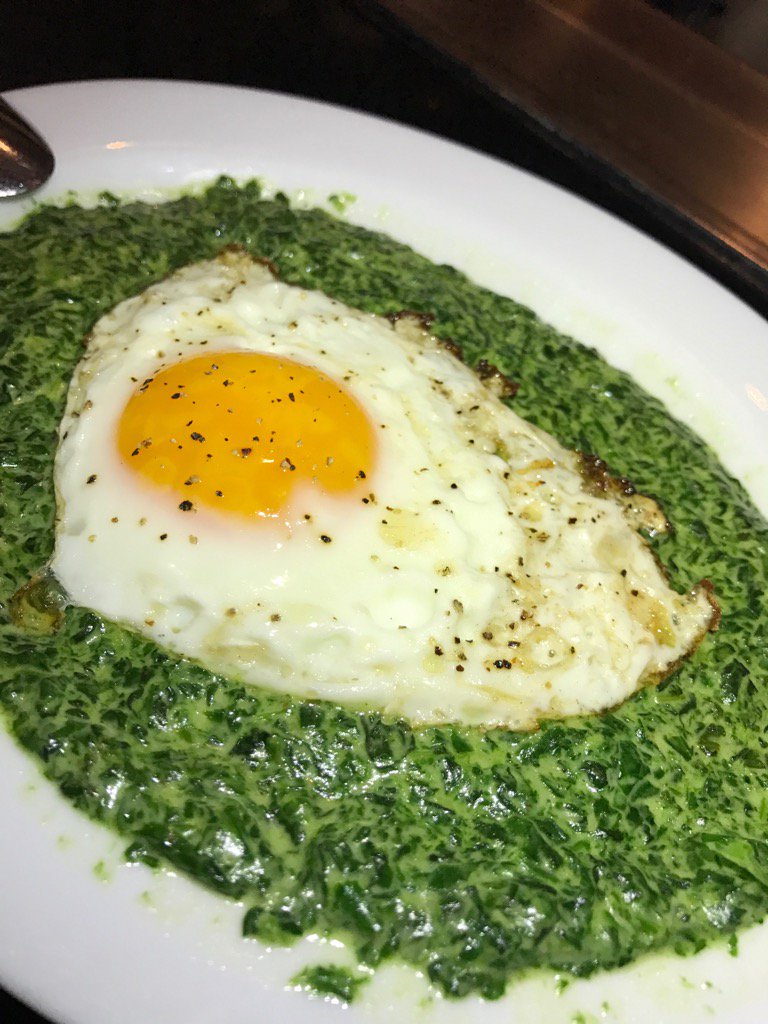 Whassup with all the eggs on stuff? Is there any food that is not fried-egg appropriate?

The fried egg phenomenon seems have been born from an unholy alliance between three of the most dreaded forces in feeding people for money: the need to enrich a dish, the mandate to do it easily and cheaply, and the requirement that your culinary creation be cool at all costs. From our exhaustive research that has yet to be done, we at ELV have determined that the first egg on top of a non-egg-related food was first dreamed up by Spanish chef Esteban Ovum, who, after being expelled from El Bulli in 1999 (for refusing to try to recreate the Last Supper using only a pint of agar-agar, 12 grains of rice and an immersion circulator) , decided that instead of wasting his time trying to make things look like eggs that are not eggs, he would rather just slap a real egg on everything: fries, burgers, big-ass ravioli, you name it. He did this to worldwide acclaim, and before you could say “Nathan Myhrvold,” every chef in the world was following suit. These days, every chef’s motto is: When in doubt, put an egg on it. As for your second question, as of this writing we would have to say that the only food that is no longer egg-appropriate is the martini.

I live in Minnesota, where all the Mexican food tastes like it was made by a guy named Sven, because it is! Because of this, my standards are admittedly low, and I loves me some good fast food tacos when I can get them. I just heard a giant Taco Bell opened in Vegas. Is it worth a trip there when I come to Las Vegas next year? By the way, my wife’s name is Gunnilda, no jokes please.

From your wife’s name ending in a vowel, I can only assume that you come from southern Minnesota, meaning: you both may have a passing acquaintance with food that actually tastes good. Then again, surströmming. To your question, yes, there is a big shiny new Taco Bell Cantina on the Strip that serves booze, stays open 24 hours, and has “exclusive souvenirs” as well as…wait for it… bikinis! Because who isn’t thinking “two piece, anal floss swimwear” when you’re enjoying a tasty, 3,000 calorie volcano quesarito? Our staff is quite excited about these developments. Then again, other things our staff gets excited about are: the proliferation of ginormous drug stores up and down the Las Vegas Strip, gargling with razor blades, and dating bartenders named Blake.

If you had to be marooned on a desert island, who would you rather be stuck with: Julia Child in her prime, Anthony Bourdain or Giada? My buddies and I say it’s no contest. And by no contest we mean Giada’s cans. Your thoughts?

Tough one. Bourdain is a lousy cook, and his constant yammering would drive you crazy, but he would come in handy fighting off natives (or at least boring them to death) while he pranced around pontificating like he was the first one ever to un-shell a coconut. Giada’s sweet and sexy and all (especially with a team of makeup artists at her disposal), but that accent might start wearing thin after a day or two, and her size (and those breasticles) would definitely be a liability when it came to basic survival skills (hauling logs, hand-catching fish, shutting up Bourdain, etc). Plus, her cooking skills might be seriously limited without the benefit of Daddy’s money, a weekly mani-pedi and the Po Valley at her disposal. After the initial thrill of some (no doubt forced) celebrity sex wore off, we would probably revert to one of those Lina Wertmuller movies  — her the spoiled rich girl, me in charge of whipping her into shape while demeaning her pampered upbringing (JEALOUS? YOU BET!) and trying to overlook how hairy she had become. No, it’s really a no brainer because Julia (at any age between 40-70 would be a joy to be around. She’d have the size (6’2″) to out-manly me at any chore (TRUE!), and we could spend days, years even, perfecting our ballontine de volaille de farci au boursin et aux tomates séchées and sauce gribiche together. Pure bliss.

How annoyed do you get that, despite publishing five books on the subject, writing this blog for eight years, and being extremely active on Facebook, Twitter and Instagram, friends and family still ask you where they should eat?

Let’s put it this way: I’m a patient man. (I’m not, but for purposes of this topic I have been very.) For twenty-one years I have scoured all of Las Vegas and reported on where to get good things to eat. I’ve been on the radio; I’ve been on TV. I’m still on TV almost every Friday on KSNV Channel 3’s Wake Up With the Wagners morning news show. If you don’t catch me there you can follow me on social media, where I post something multiple times a day about where I’ve eaten and what I liked or didn’t like about it. The easiest way to find my opinions is by coming to this site, going to the Google box on the bottom right side of the front page, type in a restaurant’s name, and then read everything I’ve written about it over the past nine years. Earlier this year we published the fourth edition of EATING LAS VEGAS – The 50 Essential Restaurants. In less than a week the fifth, 2017 edition will be published by Huntington Press. The book  also contains a 100+ pages of carefully curated opinions about where and what to eat out in the ‘burbs. It costs less than single cocktail does on the Strip. And is available on Amazon. In short, there is no shortage of information available (in a variety of formats) that will tell you what I think about a restaurant and why.

So, how annoyed am I when someone who knows me, and knows (or should know) I do all of these things, asks me, “What Italian places do you like?” or “Why do you like  this one and not that one?”

How annoyed do I get, you ask? About as annoyed as this song is annoying: