Have you recovered from your Halloween yet?

Think about it, isn’t that a pretty ridiculous thing to say to another adult?

But it’s the rule not the exception these days, as year after year, grownups succeed in further hijacking an evening that used to be the province of little kids.

Heck, ELV remembers when he turned 11, and Halloween suddenly seemed like some ridiculous ritual fit only for nerdy third-graders.

If Facebook and Instagram are any indication, the wee ones are but a small part of party-hardy Halloween weekends these days, and half the time, mummy and daddy are dressing up with them, so the little buggers won’t have all the fun.

Leaving aside how absurd anyone over ten looks in a costume, the fact that Halloween is now just another chance to focus on ourselves, instead of the wee ones, is but another sign of the apocalypse, or at the very least, decadence of a decidedly first world, me-me-me sort.

So, sorry friends of ELV: you and your Halloween parties (and costumes you planned for months) look foolish to these adult eyes. Costumes are for kids trying to disguise themselves as something cute or funny, NOT for grownups desperate for attention.

Unless you’re gay men. Then we’re fine with it.

There, we said it.

To the restaurants, ELV!

It takes a lot for a chicken soup to impress us, but this beaut did the trick:

…containing as it did, a nice, fat chicken-stuffed ravioli and peas in an alderwood-smoked chicken broth.

As it was a weeknight, and we were trying to maintain our girlish figure, all we sampled were a variety of apps. But from a very strong shrimp ceviche:

…through an assortment of small plates, none of which disappointed and all of which were miles better than vittles you usually find around The District at Green Valley Ranch — a neighborhood where the customers never met a franchised food they didn’t find fabulous.

A few bites and a gander at the menu convinced us this may be a winning formula for a space that has failed with a number of concepts. It (the menu) is all over the map (as its clientele expects), but chef-y to just the right extent. And by “right extent” we mean they know how to make a mean empanada, grilled octopus and oxtail tacos without scaring anyone off.

But it’s that chicken soup we’re still  thinking about….that an a tower of chile-infused Old Forrester:

…that makes one helluva cocktail:

Speaking of cocktails….have you been to The Golden Tiki yet?

If you haven’t, and you’re a lover of fruit-infused rum, you’re really missing something: 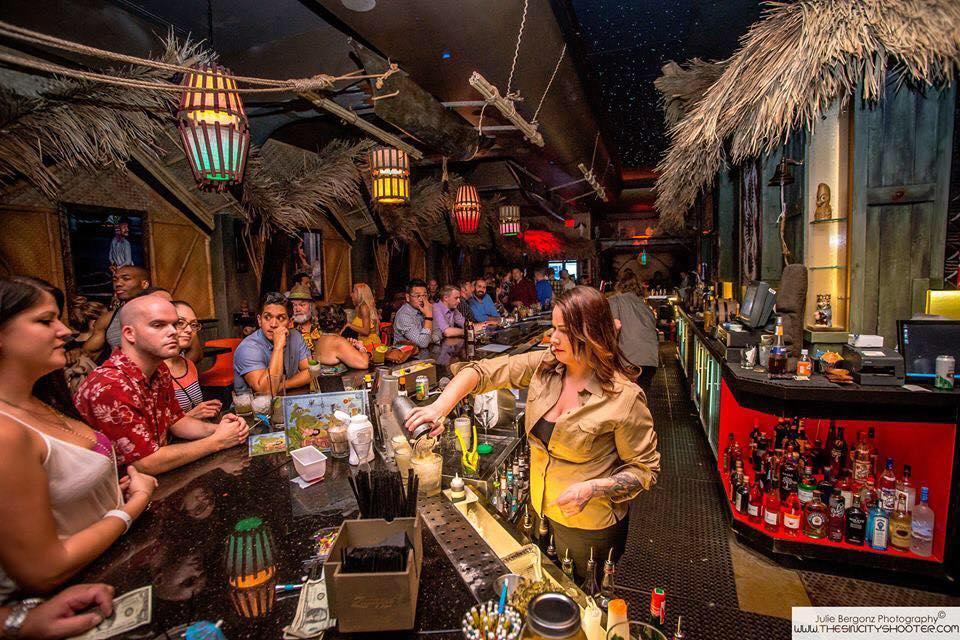 The Tiki is every think Frankie’s Tiki Room isn’t: clean, organized, unintimidating and fun. (Nothing against Frankie’s, but it’s a dive and proud of it.)

The rum drinks are great, the vibe is mellow, and the service is top notch. Best of all, it is located smack dab in Chinatown, right on Spring Mountain Road, making it the perfect place for a pre- or post-prandial cordial, after an evening of spicy Szechuan or inflammatory Thai.

We put both of these deserving spots on Channel 3 last week because they were having Halloween parties, for adults, at a time when adults should’ve been home, handing out candy, to children. We hope both joints were jammed to the rafters Saturday night. Indeed, our staff wanted to visit one or both, but we just couldn’t bring ourselves to deal with this sort of silliness for an entire evening.

The District at Green Valley Ranch

3 thoughts on “Some WHIST-ful Halloween Thoughts to TIKI About”