The rich are different from you and me. – F. Scott Fitzgerald

So are restaurant critics.

Unlike the rich in Fitzgerald’s quote though, we don’t think we’re better than you, just more observant.

More tuned in. Less distracted. More sharply aware of the fine points of the food we are sticking in our mouths.

Are we snobs? Absolutely. Of the highest order. Don’t you want any professional critic (of art, music, literature, design, etc.) to have the highest standards? To bring years of education and discrimination to the subject at hand?

Nothing would be more boring, and less useful, than a “critic” who liked everything. Fast food tacos? Great! Canned soup? Beat a path to that door! The 24th link in a celebrity chef’s chain? Don’t miss it!

If you’re looking for that sort of reflexive boosterism, Instagram has plenty of influencers for you.

If you’re looking for an educated point of view, then you seek out and read someone who knows their stuff. And by “knows their stuff” I mean has a wealth of knowledge based upon real world experience, travel, study, and deep involvement with the subject. You want opinions, Yelp is full of them. If you want to learn something, read on.

To a food critic, every bite, every meal is really about one thing: 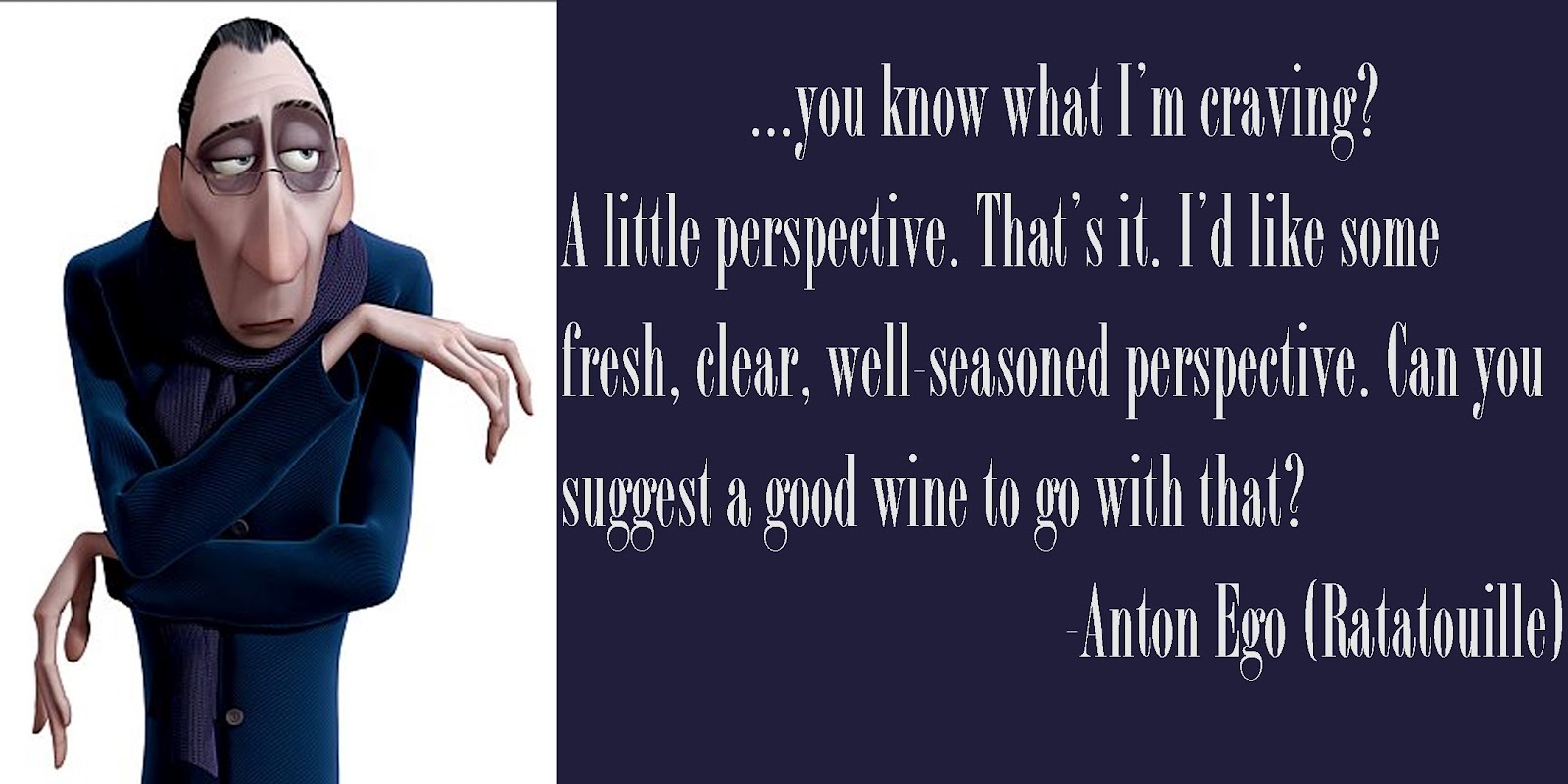 Perspective. A point of view. Vision. The intent behind the food. What is it that this restaurant is trying to do and how well do they do it?

There can be as much perspective behind a taco truck as there is at Twist by Pierre Gagnaire. Is the truck content to sling the same stuff dozens of others are doing, at a cheap price, to help you feed your face quickly and cheaply while helping it pay the rent? If so, then there ya go.

Or is it aiming higher? Are the salsas not out of a can? Are the tomatoes riper, the meat better, and the seasonings finer? Were the tortillas made minutes or days ago? After your second or third bite, are you saying to yourself, “Self, I can’t wait to come back here”?  Or are you just happy you are not hungry anymore?

Not every meal can provoke this kind of reaction:

…but it’s what you always seek — the Holy Grail of Food — something so intense, so transporting, that memories are stirred of the visceral, the elemental, the emotional ties we have to food.

All a critic is looking for is either that imaginary transportation to another place, or to be riveted to where you sit. If food achieves neither it has failed you. Your mother’s chicken soup could do it; Joël Robuchon’s mashed potatoes do it. A great piece of meatloaf can be just as soul-satisfying as a French Laundry degustation.

One of the reasons critics disdain fast food is because it divorces food from time and place, memory and feeling. Fast food is food as fuel and that’s it. There is no connection, no enrichment gained from eating it. The spiritual binding brought forth from a simple home-cooked meal is non-existent. We cram, we get full, we are connected to nothing but the will to stay alive.

If chain restaurants represent one end of the feeding spectrum, then critics occupy the obverse. Food is the furthest thing from fuel in a critic’s mind. It is an ideal to be sought; perfection to pursue….sometimes with hesitance, sometimes with gusto. To search and find perfection is our quest, but we’ll settle for excellence, wherever we find it. 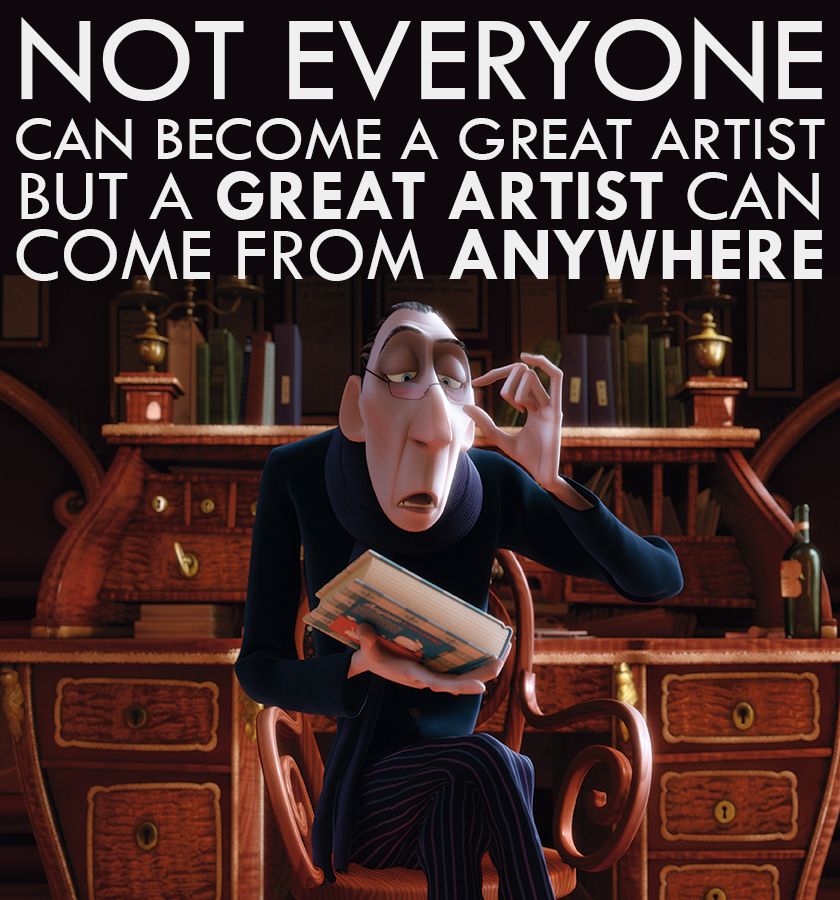 Perfection is unobtainable, in art or food, but excellence can be anywhere. And in searching for it with every bite, you acquire what I call a taste Rolodex in your head.
Every bite contains a comparison. A spoonful of ice cream gets graded against every other one you’ve ever had. When you stumble into Giolitti in Rome for a scoop, from your first lick you’re comparing it to La Strega Nocciola in Florence, which, you recall, kicked the ass of that poseur franchised crap you had in New York that time. And when you stroll into Gelato di Milano in Las Vegas, consciously or unconsciously you are holding them to those standards.

The glory of course is in the pursuit; the obsessive hunt for the best. And if you’re going to obsess over anything, what’s better than having an all-consuming ardor for something you have to do twice a day to stay alive?

Yes, we can dutifully shovel proteins, amino acids, starches and complex sugars into our piehole, solely to stay alive, and not give them another thought.

But nature gave us a sense of smell and taste for a reason: to discern the edible from the inedible in the wild. Modern man doesn’t live in fear of dying from toxic berries or diseased meat, but the same skills our ancestors used to eat healthily thousands of years ago serve us well today when deciding the right time to eat a piece of fruit, or when a protein has been cooked to its optimum flavor potential. 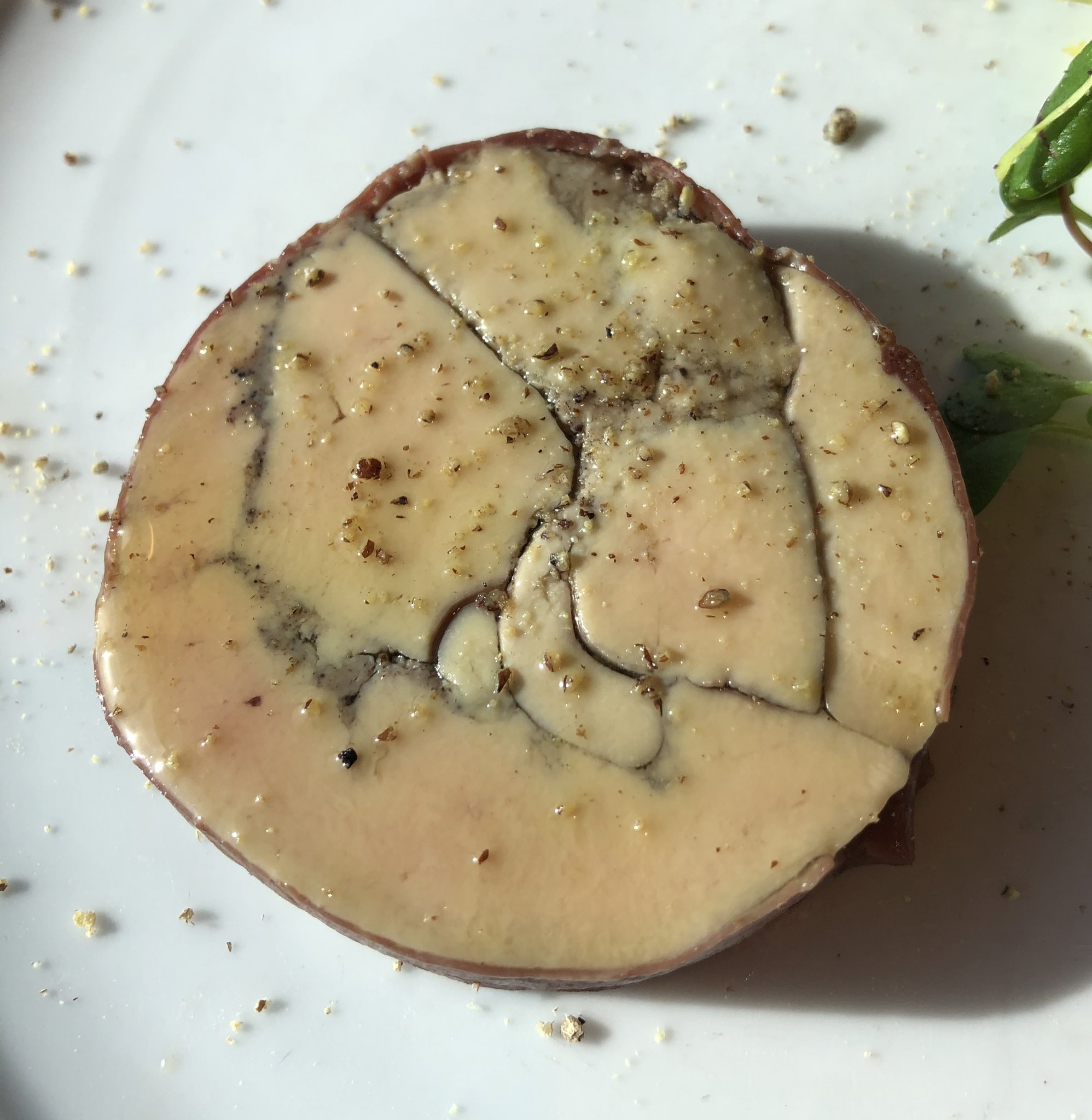 On some level, that’s all a food critic can tell you. Did they know how to season it and know when it’s done? There is your baseline. Then, there are finer points and deeper dives: Did the foie gras poached in Sauternes (above) taste of wine-drenched, silky liver, or just salt? Was it properly cleaned?  Is the recipe trying to mimic a classic? Or a riff on it? Or is it a copy of a copy of a riff on a classic? Is the ornamentation on the plate for taste or show or both? Are there too many elements to a dish or not enough? (Rarely the latter.)

All gastronomes are searching for dishes of high amplitude – where the flavor elements converge into a single gestalt. A good critic should likewise be such an inquisitive epicure (or at least aspire to be one), even though many, sadly, are not.

A knowledgeable critic has a wealth of experience in his brain (that Rolodex thing again) to give you answers to these questions. Does that mean he’s right and you’re wrong if you disagree with him? No, but if he/she is doing the job right, at least they’ve given you a baseline of information upon which to make your own judgments.

As with movies, a good critic can not only tell you if something is good, but why it is so. No one said it better than Rogert Ebert:

I believe a good critic is a teacher. He doesn’t have the answers, but he can be an example of the process of finding your own answers. He can notice things, explain them, place them in any number of contexts, ponder why some “work” and others never could. He can urge you toward older movies to expand your context for newer ones. He can examine how movies touch upon individual lives, and can be healing, or damaging. He can defend them, and regard them as important in the face of those who are “just looking for a good time.” He can argue that you will have a better time at a better movie. We are all allotted an unknown but finite number of hours of consciousness. Maybe a critic can help you spend them more meaningfully.

Substitute “food” for “movies” in the above paragraph and you have the best defense of a restaurant critics I can think of.

Finally, we come to the question of the actual tasting itself. How does a critic evaluate a dish? Is it different from how you taste food? Most likely. It is certainly a lot faster.

Hypersensitivity is our calling card — to raw ingredients, degree of doneness, balance, temperature, spices, herbs, texture, mouthfeel (not the same thing), harmony, assertiveness, amplification of one note over another — all of which goes racing through our brain before the second bite.

As with wine or music, once you understand the subject on a deeper level, you’re incapable of being satisfied with mediocrity. You might be perfectly happy grooving to the sweet, sweet sounds of Donny and Marie singing their greatest hit, but someone schooled in classical music or modern jazz is not so easily amused. In another life, Domino’s pizza might’ve sufficed; now it makes you want to barf.

Then there’s that pesky perspective thing again: how does this dish, this restaurant, this meal, fit within the context of every other meal, you’ve had?

Back to Ebert again, he quotes Socrates when arguing that “an unexamined life is not worth living.” He pushes the movie goer to understand both their and a filmmaker’s philosophy about a movie, in order to explain with some depth why you like or don’t like a film.

It would certainly be nice if all movie buffs had that level of understanding, just as I would argue that if everyone who eats (and that would be everyone) would examine their food with same intellectual rigor a critic does, the world would be a happier, healthier place. 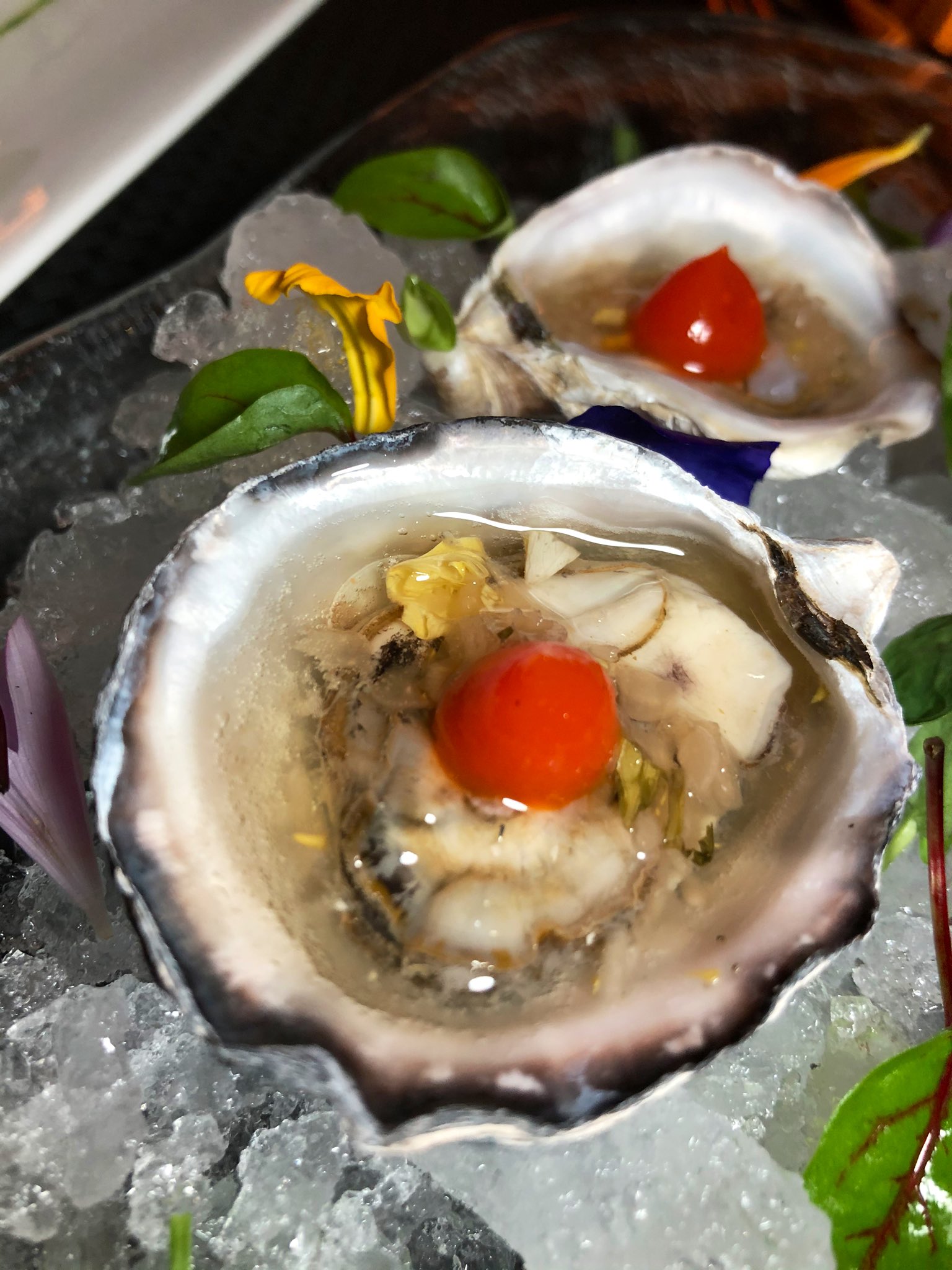 In reality, this will never happen. All a passionate critic can hope for is to shine a small ray of enlightenment on your meal. You should go to Bouchon for oysters, for example, because they always seem to get the plumpest, briniest specimens in town. (Or Sage, for their classic Tabasco sorbet-topped beauties, above.) The selection at Bouchon is never too large and the staff always knows their bivalves. This is the sort of information an informed consumer should have in their holster before dropping fifty bucks on a dozen of them.

Does this mean you will identify the watermelon/cucumber notes of a deep-pocketed Kusshis the same way I will? Perhaps not, but if you taste them next to some $1 oyster bar (Hello, Palace Station!), you would find it’s no contest. Such is the ground a critic plows so you won’t have to.

Yes, I get ecstatic over restaurants like Bouchon and Sage, just like I do over oysters, pizza, steaks, tacos and the fanciest French food you can imagine. (I can still recall my oyster epiphany in Brussels almost thirty years ago, when the slippery little critters were so fresh and alive they contracted when hit with a squirt of lemon.) Such was the beginning of a life-long affair.

As any romantic can tell you, once you fall in love, falling in like is no longer an option. To be a good critic, you must love your subject even when it isn’t loving you back.

3 thoughts on “The Taste(s) of a Critic”