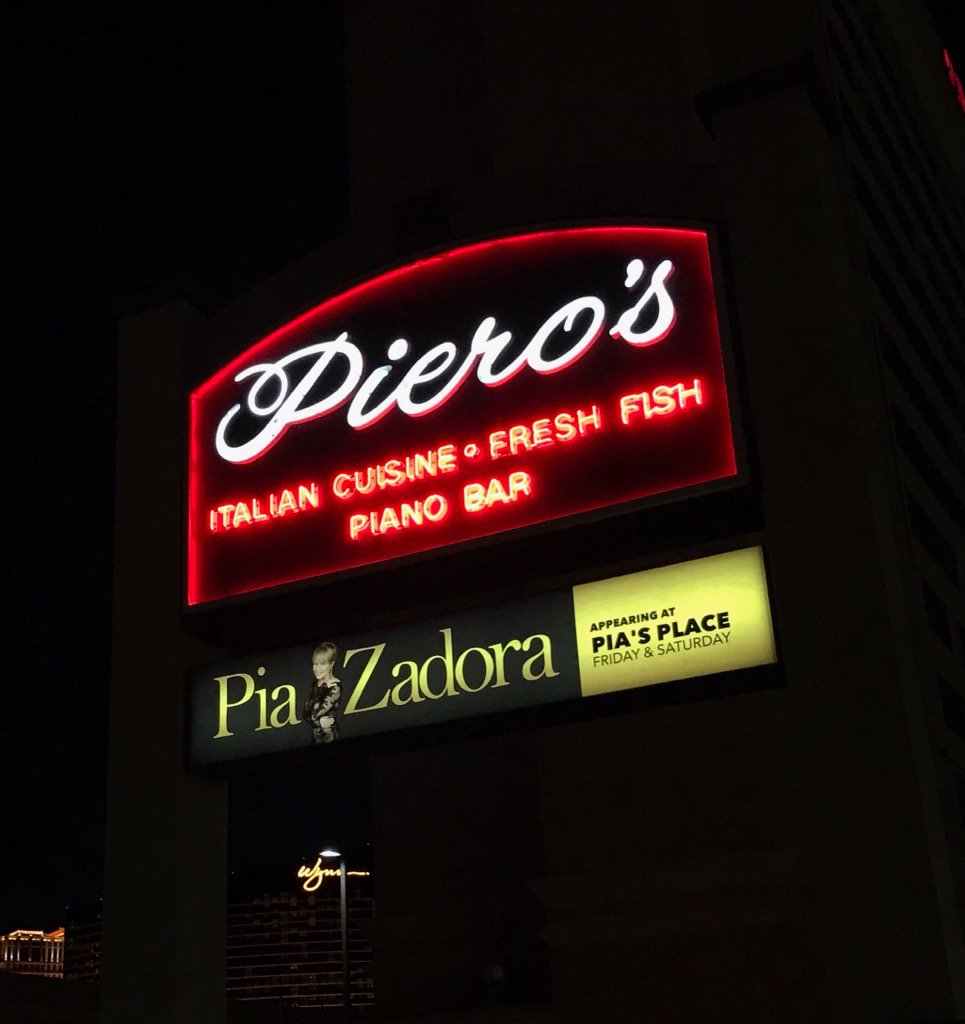 The plan was to get drunk first.

Because I knew I was going to need some fortification.

I won’t lie; I knew what I was in for, and a good stiff martini (or two) would be just the thing to soften the red sauce slings and overcooked Italian arrows of this dining dinosaur. They might even create the sort warmth and bonhomie that might make the evening enjoyable.

So, I ordered a martini (actually, a Gibson) and it came in a vessel the size of a small boat. Thus, with one fell swoop did the cocktail (that was actually three drinks in one), start to erase the memory of the indignity I suffered upon entering this warhorse only a few moments earlier.

That indignity, the sort that must be suffered by countless diners in this town, was a new one on me. It wasn’t the usual “would you like to wait in the bar” scam, nor was it the “we’re fully committed” bullshit that confronts hapless conventioneers (staring into half empty dining rooms as they’re turned away) nightly in our humble burg. (Hint: They’re almost never fully booked, they’re just too lazy to figure out a way to seat you just then.) No, this was a unique situation. Let’s re-trace the steps, shall we?

It started at the hostess booth. It was 5:30 on a Tuesday night.

“Do you have a reservation?” she asked. “We’ll see what we can do; would you like to wait in the bar?”

“No problem,” we thought to ourselves. “I’m planning on getting drunk tonight so that’s just the ticket,” is what was dancing in my head.

Unfortunately bar #2 was wall to wall with patrons (at 5:32 pm) and there wasn’t a seat to be had. (Bar #1 was reserved for a private function — an event that appeared to be four guys swigging beers in a corner. An hour and a half later, it was down to three guys swigging in the same corner, among a dozen empty barstools and three vacant booths.)

So I ambled back to the hostess stand, content with the fact that I’d have to begin my drinking at the dinner table.

“There’s no room at the bar,” I stated cheerfully to the host. “Could I get seated now?”

This appeared to cause some concern. Or at least some conspiratorial whispering. Said whispering ensued as I glanced upon a sea of empty tables behind them.

In a minute or so, the conspiracy was settled and the young women asked me to follow her. The downcast look she shot me when she popped the question should’ve given me a clue.

We walked past that ocean of emptiness and she directed me to one of two, vacant, elongated u-shaped booths in a corner. Preferring to sit looking out onto the dining room, rather than facing a wall, I started to slide along the wall to settle into my seat.

The problem was, I couldn’t slide. As soon as my torso hit the space between the table and the back of the booth, there was no room. The rounded table was pushing so deeply into my 41″ waist that it was all I could do to slide a few feet into the table, all while being cut in half by the furniture. At first I tried to see if the table was adjustable; it wasn’t. When I tried the other side of the booth, it was just as bad.

At most, there was maybe 12″ of clearance between the table and the back of the booth. I fully admit to have three more inches on my waist than I should have, but even a 150 pound stringbean would have difficulty sitting there.

About then, I looked up at the hapless waiter and said, “This is unacceptable,” and noticed him smiling meekly at me — a smile that quietly announced, “This is where we seat all the suckers, if we can get away with it.”

So, I trudged to the hostess stand for the third time.

“I’m sorry,” I said in a voice that was preternaturally soft and calm, deferential and exceedingly polite, especially for me, “but that booth you showed me is very uncomfortable. Do you have anything else?” (By this time, as you can guess, I really wanted that martini.)

With that, she proceeded to lead me past the almost-empty bar #1 into a room that looked like a second class convention hall in Cedar Rapids: 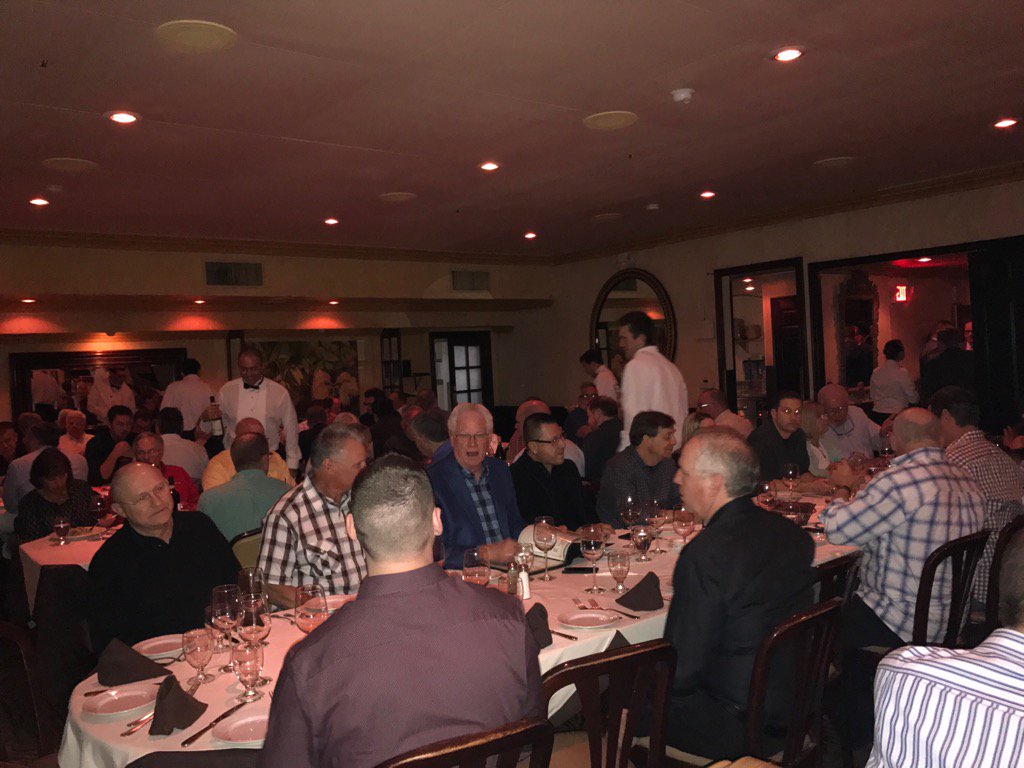 The first thing that confronts you at Piero’s is their list of celebrity guests: 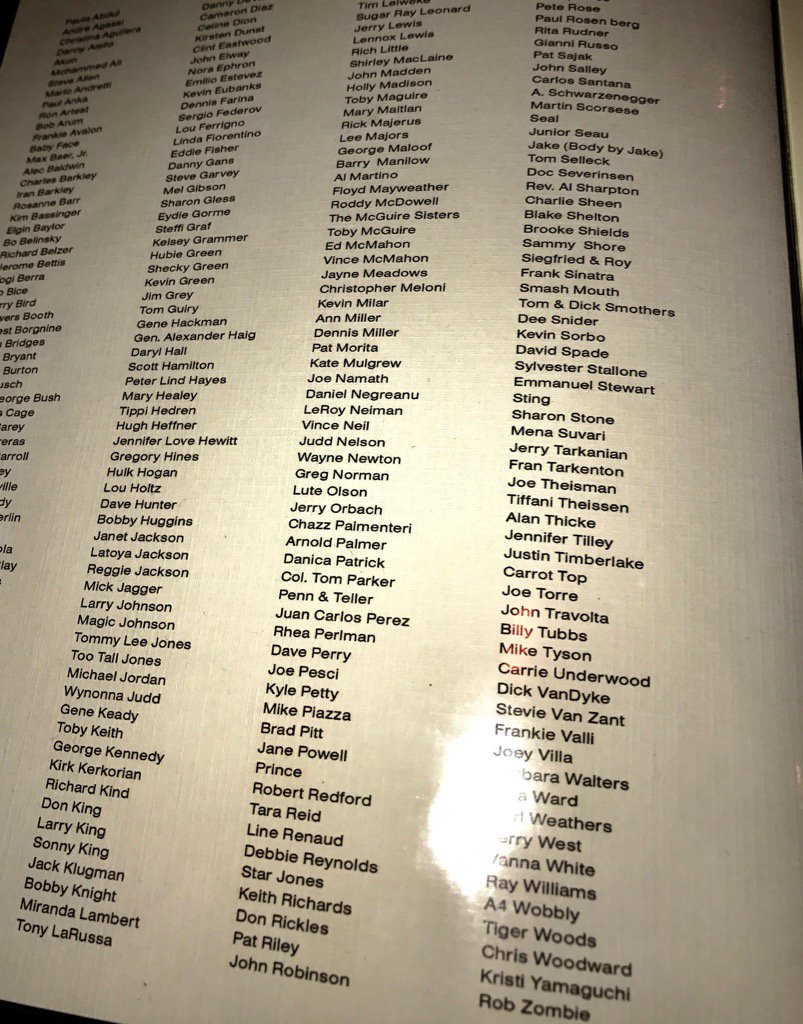 …which confirms one of two invariable rules of Italian dining. First, the more pictures of Frank Sinatra there are on the walls, the worse the food, and second, the more celebrities that show up, the faster you should run away.

Not that we have anything against Paula Abdul or Rob Zombie, but neither is known for their culinary discernment. (Nor is anyone else on that list.) And let’s face it, Mike Tyson is to gastronomy what Thomas Keller is to wife-beating.

With all this in mind, we were off to the worst start since Trump’s presidency. But we soldiered on.

By the time we were halfway into it, the Gibson started to do its trick, and by the time the wine list was presented, we were almost in a good mood.

(A note on the wine list: It is the most ridiculous carte des vins in all of Las Vegas, with markups that would make Steve Wynn blush. On the plus side, it dispenses with all of that $81 v. $79 nonsense — everything is rounded up to the nearest $5 increment — but locating a bottle under a hundy is harder than finding a hymen in a whorehouse.)

So we settled in, caught a mild buzz, and ordered a twenty buck primitivo that was served 20 degrees too warm.

Then, the real adventure began:

$64 worth of dry, stringy stone crab: 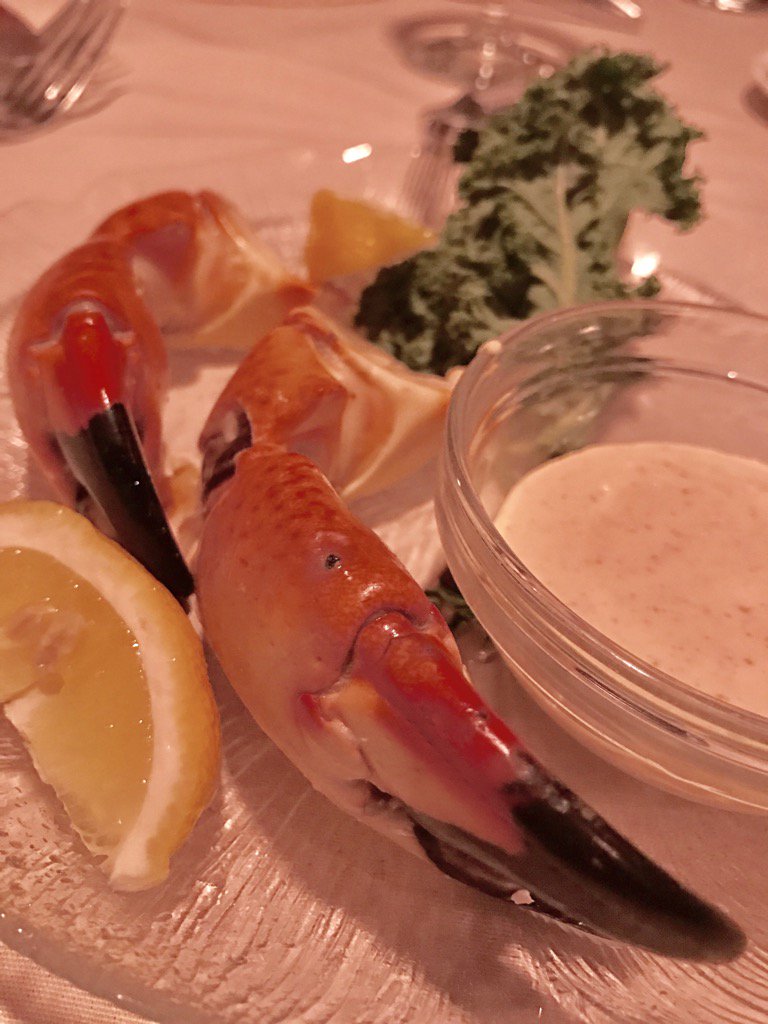 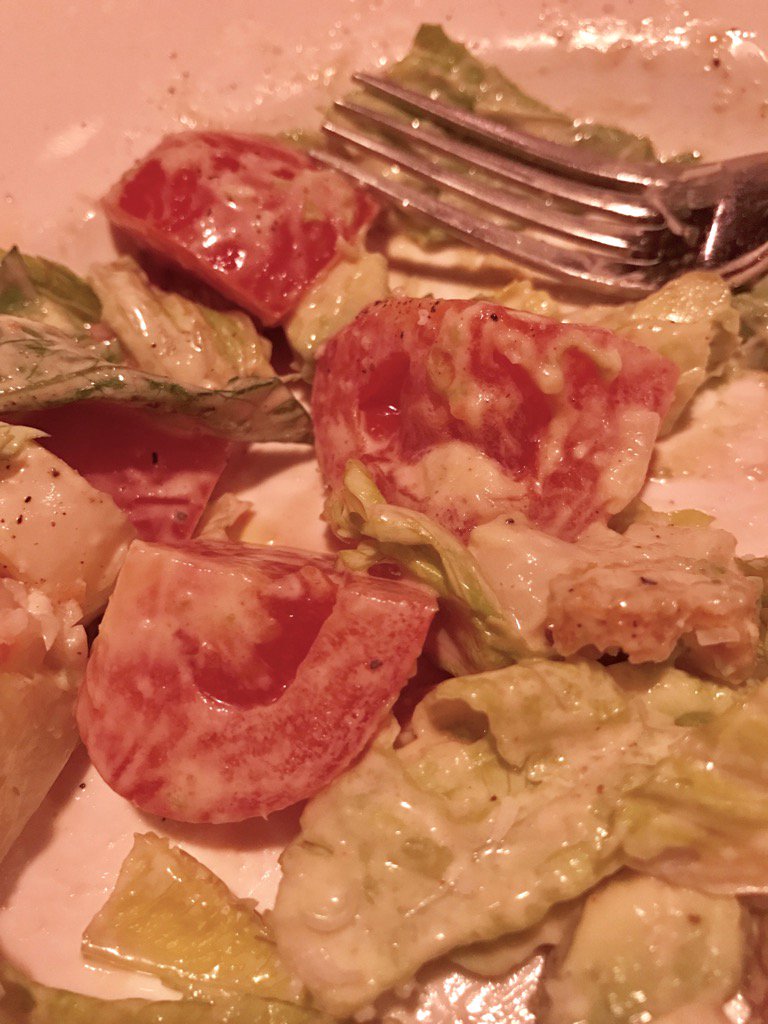 $29 worth of pasta puttanesca swimming in sauce: 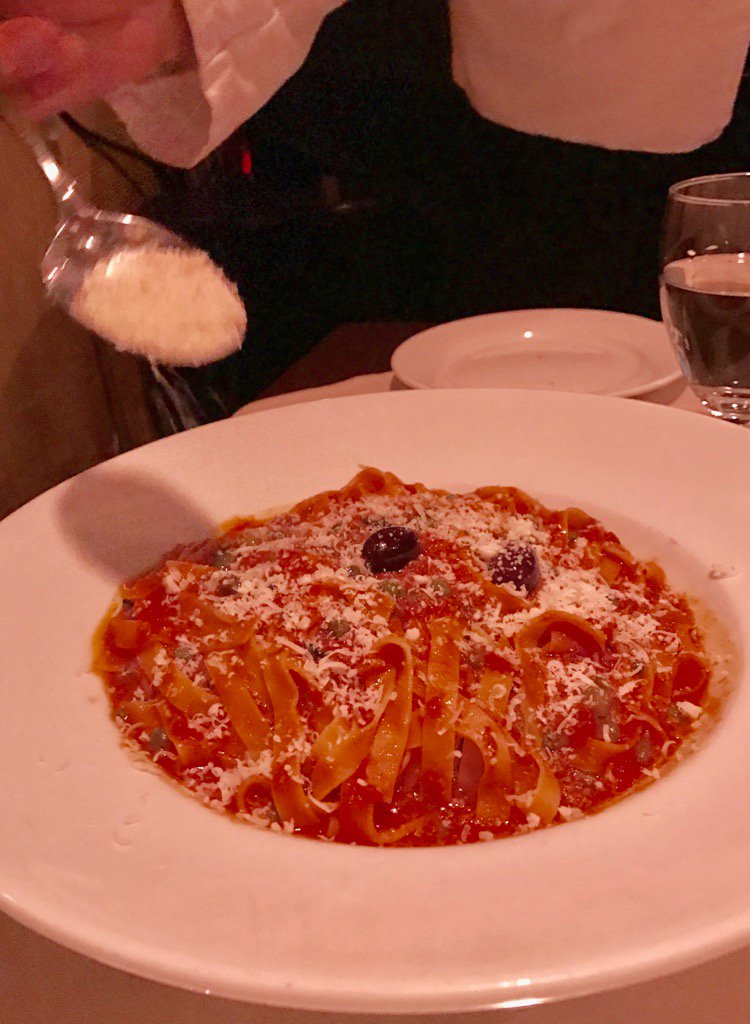 …tasting of overly sweetened tomatoes upon which two olives and a dozen capers were sprinkled. It was by turns both anemic and a diabetic’s nightmare — no mean feat that — and about as authentic as pineapple on a pizza.

Then there was the veal saltimbocca: 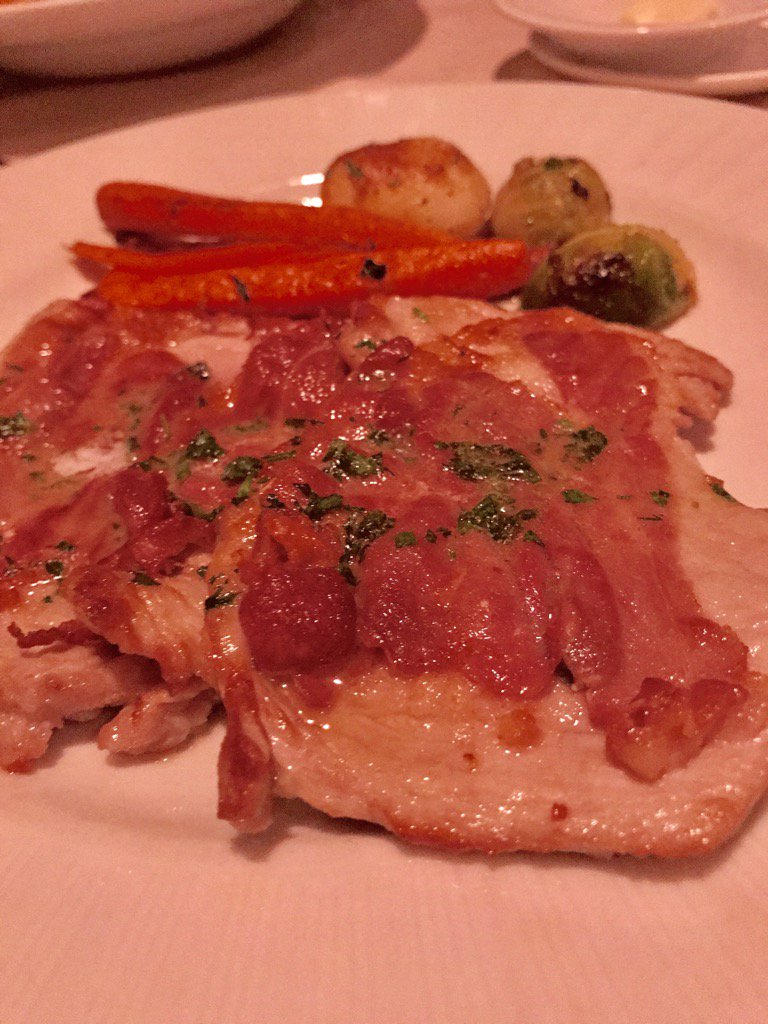 …a version devoid of character (not to mention cheese, sauce or sage), so as to make a mockery of the “jump in the mouth” translation of the name. Throwing pancetta on top of veal does not a saltimbocca make, but such things matter not to a kitchen that’s been getting away with culinary murder for decades.

Our waitress (very good, BTW) sold us on the creamed corn, so we bit: 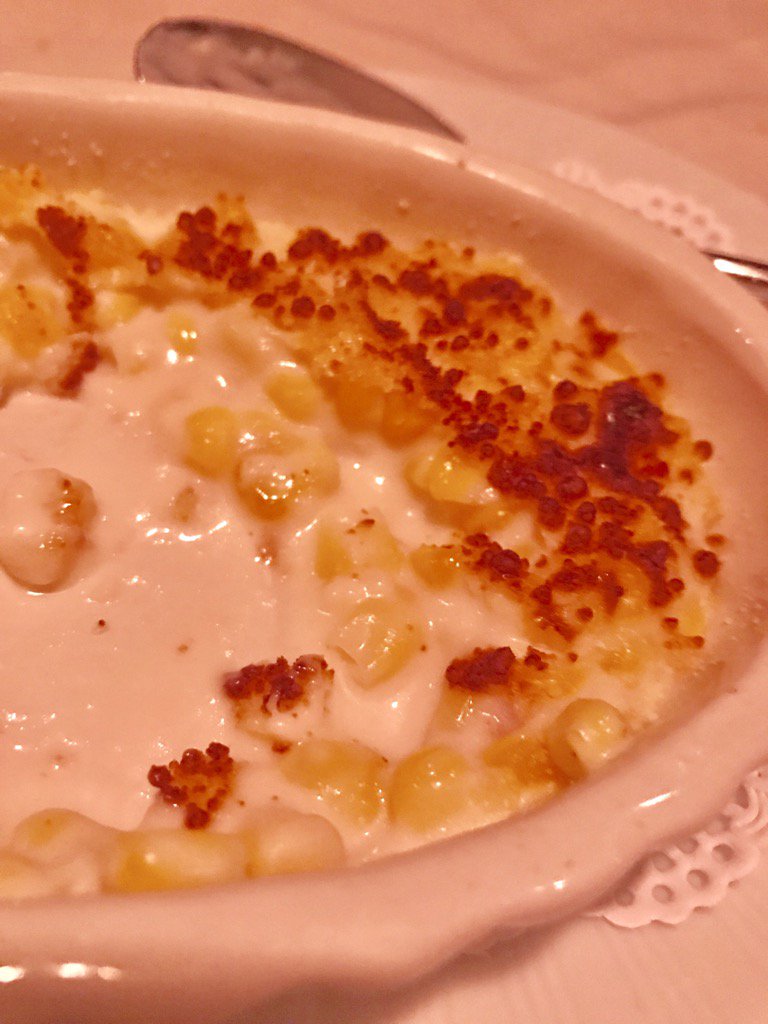 …and what was delivered contained corn (canned) upon which cream had been poured, and some bread crumbs toasted, and that was it. Creamed corn it was not. On the plus side they didn’t charge us for it.

When the stupefaction subsided, we were handed a bill for $220. $220 for four dry crab claws, one worthless salad, a lousy pasta, a terrible veal dish, two rock hard cannolis, and two very alcoholic drinks.

There is a certain type of local who will tell you to this day that Piero’s is a great restaurant. “One of our favorites,” the refrain goes, or “the best Italian in town.” In fact, just two nights after our dinner here we ran into some old friends who stated their love for the joint and how they go there at least once a week. Upon closer inquiry, they confessed that the ginormous cocktails were a big draw, and the fact that they had a house account. And, to be fair, the service (notwithstanding that booth debacle) is excellent.

We’ve had similar conversations over the years and they always leave us dumbfounded. People who should know better — the well-heeled and the well-traveled — treat this place like a private club, even though most nights it’s packed with slack-jawed tourists who accept their fleecing like a bunch of lanyard’d lambs at slaughter time.

But week in and week out you’ll find them here —  blue-haired doyennes, white-haired car dealers, past-their-prime attorneys, real estate agents, politicians, and pit bosses — a certain breed of Old Vegas that long for the days when men were men and red sauce ruled.

The point is, Piero’s was never any good, even in its prime. It’s not a place to go for good cooking now, and it wasn’t in 1984 when I first ate there. (Back then it was all about the bent-nose guys who hung out there – who didn’t know anything about good food either.) It’s like the place in Big Night that packs in the fun loving, the celebrities and the nouveau riche, even though the food is atrocious. This doesn’t keep them from charging three times what it’s worth, however.

Drown anything in crappy tomato sauce and cheap cheese and the world will beat a path to your door. I wrote those words 22 years ago and they’re still true today. The people eating here don’t care about authentic Italian or even authentic American-Italian. All they care about is feeling comfortable with blunt instrument cooking that hit its expiration date 30 years ago, but to them never goes out of style. But Piero’s doesn’t care about that, and most assuredly it doesn’t give a fuck what a food snob like me thinks about it.

And two fucks it will continue not to give, not while it continues to make a mint off of credulous conventioneers and the fading big shots of Las Vegas.