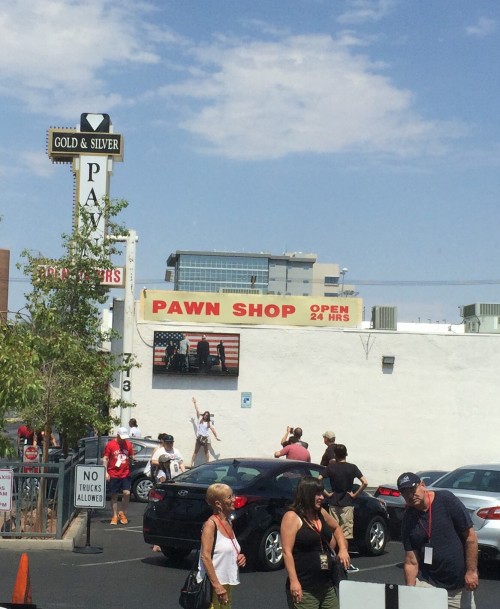 There is a certain type of knuckle-dragging, mouth-breathing, fanny-packing, Red Stater who considers a trip to the Pawn Stars pawn shop the ne plus ultra of their trip to Sin City.

The crême de la crême of their Vegas vacation, the piece de la resistance of their precious playtime, if you will.

ELV does not understand these people.

Of course, The Official Younger Sister of ELV once went to Dollywood and he didn’t understand that, either.

When these people get bored with looking at other people’s junk* they get hungry.

Knowing this, Rick Harrison of Pawn Stars fame decided to create a container park (Pawn Plaza) of eateries right across the lot from where they park their pickup trucks and Camaros.

Needless to say, it has been less than a rousing success.

The poutine place lasted for about 8 minutes — which was 7 minutes longer than we gave it — and other feed baggeries quickly bought the farm after limited runs. (And by “limited runs” we mean a matter of weeks or months at best. We’ve been here three times over the past seven months and only saw the doughnut shop open, once.)

Is this because Rick “Man of the People” Harrison is charging 10xs the normal price for these spaces (as some restaurateurs have told us), or because he has failed to properly promote the businesses as promised? (And by “properly promote” we mean he has failed to show up as a celebrity bartender like he said he would. Boo fucking hoo.)

Who the fuck cares?

When your business model is creating a tourist trap to (literally) feed off your other tourist trap, what makes you think your customers are stupid enough to buy it?

Oh, we forgot. Given the IQ of that fan base (or even their collective IQs), it was probably a safe bet to believe they’d buy anything that Rick was trying to….wait for it….pawn off on them.

ELV — the man, the myth, the inveterate, sexist dilettante — is fond of saying that women will buy anything (and they will!), but apparently there was some shit that even these lowbrows wouldn’t stomach. Like, fer instance, a Franco-Canadian, cold weather dish of crappy fries smothered in crappier brown gravy and cottage cheese curds. Sounds like the perfect meal for a 108 degree, mid-July Vegas day, don’t it?

And who among us wouldn’t flock to a place called Inna Gadda di Pizza? (Just as empty now as then)

Whatever lamebrain was behind this plaza of underwhelming food options obviously overestimated their fan’s taste for whatever Pawn Star-branded slop could be thrown their way. (Pawn Donuts!) This would seem, at first blush, to be hard to do, as anyone who can sit through 30 minutes of the idiotic drivel of the TV show clearly has the capacity to swallow anything being shoveled in front of them.

Somehow, though, Rollin’ Smoke BBQ & Tavern has held on, no doubt because Harrison has a personal stake in it, and because no doubt, no matter how bad barbecue is, you will always find some fool who will buy it.

We used to say that barbecue was like sex: the worst we ever had was still pretty good.** And then we ate at Rollin’ Smoke (both the original and Harrison’s spin off) and quickly erased that epigram from our witticism repertoire.

But, to be fair, we went back. Twice. Recently. And found the bread just as stale, the pork just as poorly pulled and the brisket just as un-smoked as ever.

On the plus side, the smoked turkey sandwich was serviceable (although it smacked of a pre-formed turkey breast, rather than a whole, smoked turkey), and came with a nice, peppery cranberry relish.

There’s also a wedding chapel on premises if you’re a glutton for bad decisions made in Vegas.

* This takes them an extraordinarily long time, because the capacity for boredom in knuckle-dragging mouth breathers is very very high.

** If you’ve ever noticed, only men say things like this.

4 thoughts on “Pawn These Restaurants!”