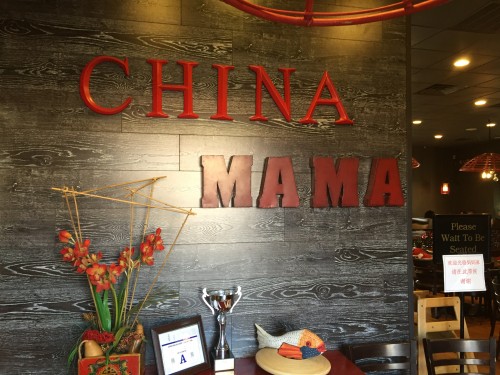 We’ve been hearing the rumors about China Mama for a couple of years now.

And on and on it has gone, with most of these reports coming in from our regs, loval readers, and other trusted foodie friends.

So, after a two year absence, we decided to see for ourselves just what was going on with the restaurant that single-handedly up-graded Chinese food in Las Vegas.

So here it is, our small snapshot of a place that, in a small way, we helped to put on the culinary map:

To begin with, the place is a lot spiffier that it use to be. A real sign greats you as you walk in (see above) and the tables, chairs, and booths have all been upgraded from the rather pedestrian ones that furnished the place when it opened in 2008.

The staff is also a lot more professional. And the menu is now printed and laminated with pretty pictures of the food, making ordering a breeze for gringos, gweilos and other non-fellow-travelers.

The place settings seem a little fancier too, all pointing to someone either buying, or investing a considerable sum in, the business. (We’re betting it’s the former.)

But let’s face it, you don’t go to a Chinese restaurant for the ambiance anymore than you go to an MMA fight for the uniforms.

What you’re here for are the dumplings, and soups and the stir-fries.

And, as it turns out, our regs were right. The food here has fallen way off.

The soup dumplings are too uniform to be fresh made, and seem unacquainted with the notion of actual soup. Of the dozen or so we tried, only one leached out the merest tsp of liquid. They also serve them now with a bowl of plain, black vinegar, not the lighter, ginger-spiked vinegar sauce that was used before.

The stir-fried green beans, to take another example, contained none of the flecks of ground pork that their predecessors did (and as they do in almost any other Chinese restaurant) , and the Szechuan noodle soup dandan, was simply a pound of noodles swimming in red chili oil:

The only dish that met or exceeded our expectations was the rolled beef pancake…it seeming to possess more beef than we remember, and being a larger portion to boot:

To end on a sour note, though, the lamb with cumin (one of their ethereal, benchmark dishes) has been taken off the menu. This is a sin for which they cannot be forgiven.

If we had to guess — and guessing is what you have to do, because you rarely get a straight answer in a Chinese restaurant — we’d guess that the original owners (we remember a woman named Mary from the San Gabriel Valley) sold the joint way back like 5-6 years ago (after the initial splash was made), and then those owners sold to the current owners, who paid a pretty penny for the operation (after seeing all those awards on the wall and fannies in the seats), who then shelled out for all those upgrades, and then decided to milk the expensive cash cow for all she’s worth by trimming back on (most of) the food quality.

Yeah, that would be our guess.

Go make your own guess if you want, but don’t say we didn’t warn you.