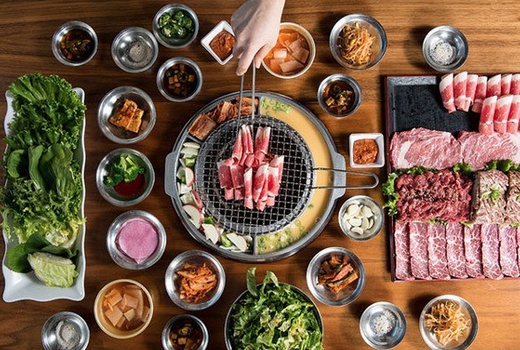 One final thought before we dive into our survey. Korean BBQ is not barbecue in the American sense. It is a form of quick, table-side grilling of various cuts of beef and pork (and sometimes seafood), the lot of which will be presented to you as a la carte or whole dinner options. The whole dinner options are usually the best bet and are easiest to order. Unless of course, you’re serious about your galbisai or chadol bagi, in which case you may want to pour over the menu like a rabbi parsing the Talmud.

Final thought #2: The din of incessantly stupid K-pop (and a constant stream  of K-pop videos) seems to be the order of the day in these places, making adult conversation difficult (more on this below). Those videos (especially at Magal) bombard you with gaggles of gallivanting, gorgeous, barely pubescent girls doing all kinds of jumping, posing and cartwheeling — in Catholic schoolgirl outfits no less! Semi-pedophiles will be in hog heaven, but ELV, being more of a puffy mules and feather boa sort of pervert, found them distracting.

Final thought #3: Asian beers and/or sochu are the only things to drink with this food (other than the ubiquitous hot or cold tea). Anyone who orders the (frightfully cheap) house wine in any of these establishments ought to have their head examined. Hobak, to its credit, advertises a “no corkage fee” for anyone who wants to bring their own vino.

Goong Korean BBQ Restaurant opened in early April, and it is by far, the fanciest and mellowest of the bunch. Most of the seating is in booths, or tatami tables that ask you to remove your shoes before sitting down. (see above), and the stupid music is kept to a minimum. It’s located in the “new Chinatown” corridor developing on South Rainbow, and is a nice addition to the Japanese, Chinese and Vietnamese mix there.

Goong proudly advertises their “prime USDA beef” and display it for your perusal next to an open kitchen staffed with butchers and cooks. (These trappings appear to be de rigueur in these newfangled places.)

As for service, the drill usually goes one of two ways in Korean BBQ establishments: either they set up the banchan (a spread of mostly vegetable appetizer dishes) before you take your seat, or they wait for you to order and bring the spread out immediately afterwards. Goong follows the latter protocol, and  we found the blizzard of plates to be more varied and tasty than the fare we’ve encountered at the usual suspects around town.

The meat was of higher quality as well — perhaps not “prime” in the classic sense of tender, well-marbled meat (that used to be about 2% of all beef but, like lots of abused food terms these days – organic and “homemade” spring to mind – now seems to be attached to anything slightly better than a supermarket steak. Be advised though, that in all of these eateries  your waitron/grill assistant seems to be trained to do one thing: overcook the meat. Thus will your prime cut suffer as he or she flits from table to table, turning the meat and checking on the cooking progress.  (Pork, being more delicate, gets quickly cremated into chewy, semi-jerky-status before either of you know it, so don’t be shy about reaching in and plucking your meat off the grill when it’s done the way you want it to be.)

Goong takeaway: Nicest decor, relatively mellow when compared to its competition, great side dishes, best soups of the bunch, and good meat. Our meal for two ran to $65 (with a couple of beers) and we left a $15 tip. 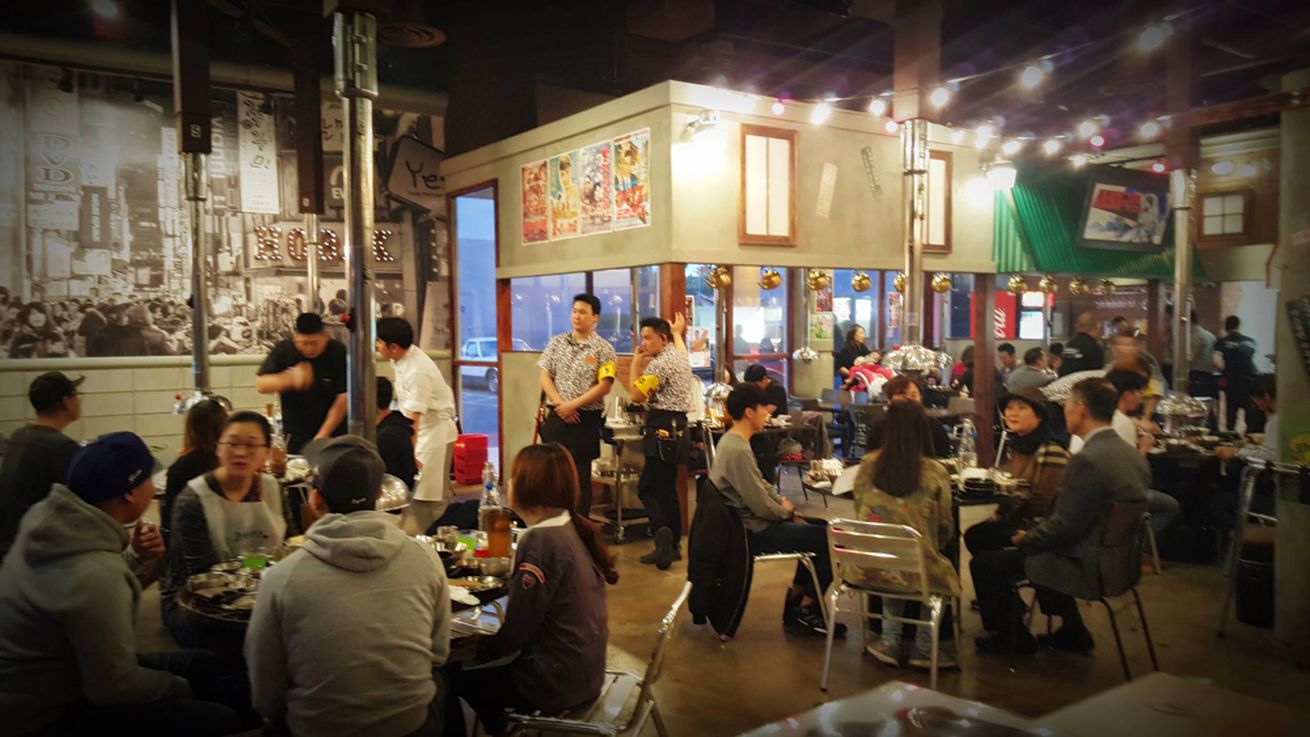 Hobak Korean BBQ also opened in early April, and it took us by surprise. We glimpsed it out of the corner of our eye as we were careening down Spring Mountain Road one Sunday afternoon, a few days before it opened for business. At first, we weren’t sure if it was a restaurant. Its location — tucked into the corner of a bunch of commercial warehouses — is not the most visible, nor does its facade give you a hint of what to expect inside.

What we found, on Day Two of its operation, was that it was that the Korean bbq-lovin’ community had no trouble finding it. What we’ve found on two subsequent visits is that it’s always packed. Or at least very busy.

Hobak is the least formal of the new Koreans, with a concrete floor, aluminum chairs, and a din that approaches military jet afterburner levels. That din makes civilized conversation almost impossible. On our second visit, yours truly couldn’t hear a word of what The Food Gal® — seated right next to me — was saying to her girlfriend across the table. Matters aren’t helped by the adjustable ventilation hood that does a great job of clearing the smoke, but always seems to be at eye level, blocking your view of your tablemates. The tables are also too small for all the stuff they cram on them, especially when dirty dishes start piling up, and pile up they will.

Equally off-putting are the constant videos of chirpy girls singing forgettable ditty after forgettable ditty in the highest register possible. (Think Alvin and the Chipmunks in thigh highs and short skirts.) You get occasional breaks from this — if you can call it that — with infomercials (in Korean!) explaining the virtues of Korean bbq beef franchises. Good times!

On the plus side, some of the food is pretty friggin’ nifty. The banchan itself wasn’t as good as Goong’s, but some of the additional items: fabulous anchovy and tofu skin soup:

…and a beef tartare that is first browned with a torch tableside before being mixed with rice:

…are worth a special trip all by themselves.

We liked the grilled beef here (but not as much as Magal’s), but went nuts over the thick, fatty, cream-colored chunks of pork jowl. Both the jowl and the big, thick strips of pork belly they unwind on the grill are served with melted cheese….because apparently Koreans have a thing for melted cheese with their pork. The bacon needed it, the jowl didn’t.

Hobak takeaway: Great pork, good beef, loudest music, best ventilation, lousiest condiments (our Korean-American friend asked for some gochujang – Korean fermented chili paste – by name and they brought us sriracha instead), limited banchan, but don’t miss the tartare, anchovy soup and other off-the-grill items. Pork dinner for four came to $20/head — a virtual steal — if you don’t mind dining with the privacy of your own thoughts.

Magal BBQ comes to Spring Mountain Road from Korean by way of Los Angeles, and has only been open for a couple of weeks. It has big tables, comfortable booths and huge video screens constantly extolling the carefree, relaxed nature of young Korean girls trying strenuously to show you how happy-go-lucky they are. Every so often the music mercifully stops, replaced by infomercials telling you why you should be buying one of their franchises. Make no mistake, these are big money operations looking to expand, and they’re as proud of that fact as Ron Popeil was of his pocket fisherman.
It has the loudest music, but also the best beef of the bunch:

It also has the most attentive service, the best uniforms on the staff (Hawaiian shirts and groovy fedoras), and they park all of your banchan at the table before you get seated, so you can start nibbling right away while the grill heats up. At Magal they hand-torch the “beef sushi,’ whereas at Hobak it’s the tartare that gets the flamethrower treatment.

The Food Gal went nuts for the creamy, almost malt-y iced tea, and I thought the groceries were better, and the whole operation more pulled together and professional than the competition’s. Magal also knows what a proper Korean condiment is.

Magal takeaway: Best ingredients, service and banchan. Most hideous music and the most blatantly commercial. (Enough with the selling already! Do Koreans really find it appetizing to be hustled for a possible franchise while they’re eating?) Our premium beef dinner for two (with the rib eye pictured above, and some fork-tender bulgogi, that actually fed three of us), and additional dishes (like the beef sushi not pictured), came to $73 and we left a $20 tip.