When you’re in a foreign country, it’s like you’re a little kid again: everything is a little frightening and fascinating. –  Hugh Alexander Curtas 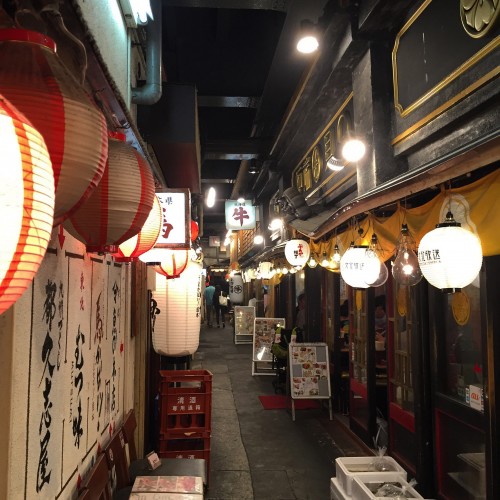 50 THINGS I NOW KNOW ABOUT  TOKYO:

1) Forget Pearl Harbor; the Japanese are a lot friendlier than Germans.

2) Tokyo is the world epicenter of sensory overload. Nothing you have seen or heard prepares you for the bombardment (poor choice of words) of lights, people, and urban intensity.

4) That said, it’s a very quiet for a place that’s moving 30 million souls around.

5) They’re not very big in the hips, butt, or breasts (and you’ve never seen so many bowed legs in your life), but Japanese women don’t know how to dress poorly.

7) African-Americans are rarer in Tokyo than a Republican in Botswana. In eight days we saw five black people. One of them was a chef in a kitchen.

9) You’re as likely to find bad fish in Japan as you are to find good sushi in Sioux City.

10) There are no fat people in Japan, except Sumo wrestlers. The only slobs we’ve seen were all speaking English.  American English.

11) It takes a braver soul than I to figure out the Tokyo subway system.

12) Every eatery gives you a wet hand towel (terrycloth in nicer places, packaged in cheap ones) to use as your napkin throughout your meal. You’re supposed to wipe your hands (not your face) with it as it is presented, and then keep it next to you (rolled or folded) throughout your meal. Few guidebooks tell you this.

13) If you want a shitty meal in Japan, go to a lower-end Belgian, French or pizza place. (Don’t ask.)

14) If you want a good dessert in an izakaya (Japanese gastropub), go find a French bakery.

15) It’s not hard to find your way around generally, but it can be impossible to find an actual address.

16) Not having to fool with tipping is a refreshing and liberating way to travel. Tipping sucks harder than a Fremont Street hooker on a 3-day meth bender.

17) There is no street crime here. No one locks their bicycles (in the affluent Ginza at least) and Tokyo is the only city I’ve ever been to where joggers leave their handbags and backpacks on park benches while they run around the (Imperial Palace) park.

18) American tourists are far less common than I thought they would be; most of the Anglo-European types we’ve seen strolling around have been Italian or Aussies.

19) You may have loved your meal, but good luck trying to find out even the name of the place where you just ate it.

20) Sitting on a toilet here reminds me of the first time I ever strapped myself into an airplane cockpit.

22) Coffee culture has become a thing here — in a nation formerly devoted to tea.

23) I think all the Japanese like to do is shop and eat.

24) And copulate. Or at least that’s what they were doing a lot of 20-30  years ago, judging from the hordes of Millennials and Gen-Xers you see everywhere.

25) It’s those hordes who have fueled the country’s culinary Renaissance, taking  the elements of Japan’s rather narrow gastronomical heritage — fish, rice, ramen, yakitori — and elevating them into epicurean icons. (The influx of foreign chefs – incorporating the cornucopia of great raw ingredients into their cuisines – has had a lot to do with it also.)

26) Don’t believe all the hyperventilating you hear about Tokyo being the #1 food/restaurant city in the world. It’s fascinating to be sure, but doesn’t come close to New York City’s bandwidth.

27) Japanese food has a subtlety to it that borders on the invisible.

28) It is bizarre and a little bit off-putting when you see or hear someone say “no photos” in a busy and very public place — this coming from a culture that invented the art of excessive tourist photography.

29) The New York Bar in the Park Hyatt Hotel (made famous in the movie “Lost in Translation”) has the most spectacular view (and the largest concentration of sloppily dressed American men) of anyplace in Tokyo. The drinks are also mediocre, small and expensive. In other words, it’s become a tourist trap that “Bob Harris” wouldn’t recognize.

30) The high-end French and Italian food here (e.g., HEINZ BECK and MICHEL TROISGROS) is as good as it is in Paris or Rome.

31) The sushi bars at Tsukiji Market — the ones you wait hours to eat in — serve impeccable fish over rudimentary rice that you have to wolf down in 20 minutes. In other words, they’re tourist traps too. The stalls in the outer market are just as good and much more relaxing.

32) Good luck finding the best of the best local joints. “You have to speak Japanese or have someone take you there” is something we heard time and again.

33) I am fascinated by Japanese food even though I don’t have a taste for 80% of it.

34) Try as I might, I cannot fathom their fascination for bean (i.e. wallpaper paste) — no matter how pretty they package it.

35) Japanese sake somms here have no interest in all of that percentage of milled rice stuff they throw at you in the States. Here, it’s all about the brewer and the taste.

36) I’ve eaten 5 Michelin 3-star meals in the last 6 months, and the two best were in Germany and Japan. I thought we won the war?

37) Japanese wine(?), yes Japanese wine, was a pleasant surprise. The  Bordelais and Burgundians aren’t exactly quivering in their barriques, but the glasses I had with various food pairings reminded me of light-bodied Gruner Veltliners, Chenin Blancs, and new world whites, and they do some passable imitations of Cabernet blends, too.

38) Even the little kids in Japan dress better than most Americans.

39) As advanced as they are in many areas, Japanese orthidonture still has a long way to go.

40) English menus are not an indicator of mediocre or tourist-trap food (as they can be in some cities), but the intrepid gastronaut will soon get bored (and frustrated) by only having access to restaurants that feature them.

41) Ramen, udon and soba get tedious pretty fast, no matter how good they are.

44) I had heard there was a Japanese craft beer revolution going on, but everywhere I looked, all I saw was Sapporo and Asahi.

45) When in doubt and hungry, go high or low: some of the best food in Tokyo is found on the upper floors of the better department stores (and there are a LOT of great department stores here), or in the basement food halls (called “depachika”).

46) Subterranean train stations and the retail areas underneath train tracks are also target-rich environments for the the hungry, adventuresome Japronaut.

47) The latter are best enjoyed by those who enjoy a soupçon of cigarette smoke with their chirasizushi.

49) Tokyo is not the place for a relaxing vacation.

50) I’m still developing a taste for sake. I like it, and think it is still the only thing to drink with sushi, but I still don’t GET it. Kanpai!

51) Japanese taxicabs are expensive but wonderful. Clean, honest, courteous and everywhere. Some train lines are navigable (but you always should ask directions when you buy your tickets), but the subway (Metro) is impossible. When in doubt, take a taxi, but be ready to pay from $10-$40 for your ride in the city center.

52) The Japanese are polite to a fault. Be ready to nod your head and semi-bow a lot, since lots of people will be doing it to you.