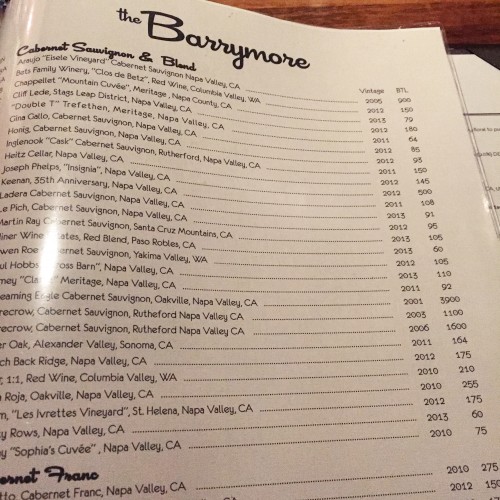 I’ve been trying to make sense of bullshit Vegas wine lists since 199o.

$3,900 for Screaming Eagle? At The Barrymore? Who the hell are they kidding?

400% markups. Oddball wines for straight-laced, middleweight clients who never met a Beringer chardonnay they didn’t like? What the hell is going on around here?

Answer: We haven’t the foggiest.

Even after 26 years of looking at these randomly-priced, absurdly-concocted menus, we remain as confused as ever as to the thinking behind them.

But all of this confusion and cogitation has led me to three simple conclusions:

1) Most lists are the result of wholesaler pressure on gullible/aspirational retailers (restaurants) that don’t know nearly as much about wine (or food/wine pairings) as they think they do. They just point and pick bottles, and hope they can make some money on the insane markups on the bottles they stock.

2) The savvier places aim to fuck their customers and fuck them hard (not in a good way) by dazzling them with variety and boxing them into having no other choice but to capitulate to paying absurd, tourist-trap prices — the same way you don’t mind paying $100 for a 20 minute gondola ride because hey, you’re in Venice! — because when you see it next to a $275 bottle, suddenly 150 doesn’t look so bad.

3) These lists aren’t about selling wine, they’re about showing off about wine. And eating up comps to high rollers. And trying to make an obscene profit on the one or two or three tables a night that will blow thousands on a bottle, rather than actually selling lots of different bottles TO PEOPLE WHO ACTUALLY ENJOY WINE. In other words, Las Vegas restaurants aren’t really about drinking wine at all; they’re about the idea of wine, and how to best use it to soak the gullible traveler or gambler. (Gamblers happily allow casinos to use these unconscionable mark-ups to satisfy whatever comp they’ve “earned,” not questioning whether that $2,000 bottle is really worth having that much deducted from the “comp.” It isn’t, of course, it isn’t even worth a fraction of the list price. On the other hand, if the money really meant anything to gamblers, they wouldn’t be throwing it down a shithole, so you could say they’re just letting the casino hose them in another way.)

Sad to say, but some of my favorite restaurants fall into categories 2 and 3.

Add it all up and you have the biggest con in American tourism: the Las Vegas wine list. And it’s only gotten worse in the past two years as we’ve come out of the recession, and F&B execs have found our conventioneers ripe (once again) for bending over.

It’s enough to make a beer drinker out of you.

Some of the worst:

A few of the better ones:

> Guy Savoy (as thick as a dictionary, with all the requisite big hitter bottles, but there’s gold in them thar hills if you’re willing to dig deep to find it)

> db Brasserie (there’s sticker shock to be sure, but also some off-beat stuff at relatively soft prices)

Final thought/tip to help you avoid feeling like you’ve just been sodomized by a wine bottle in Las Vegas: Stick with whites, preferably one of the non-chardonnay varietals. Look for Rieslings, Grüner Veltliners, Arneis and/or any sort of white wine made from a grape you’ve never heard of. Ask your sommelier and trust their judgment. Believe it or not, most whites go great with all kinds of food, even beef. Remember: reds are where they really rape you.

6 thoughts on “The Enduring Mystery of the Vegas Wine List”