Great gelato is harder to find than an oenophile with a healthy liver, or a gambler with a solvent bank account.

How can you spot industrial gelato? Easy. Just look for wild and exotic flavoring gee gaws: 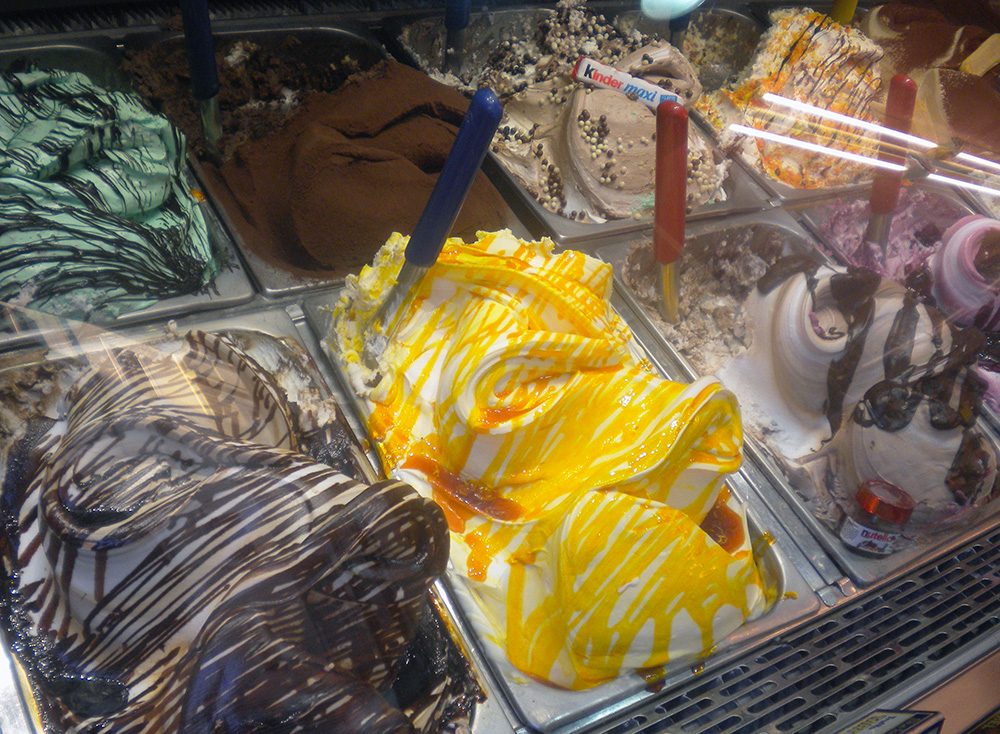 A further infallible clue to a gawdawful gelaterias is bright green pistachio. Neon green pistachio (or bright red strawberry) is dead to rights proof you’re eating something that was made from a mix or in a warehouse hundreds of miles from where you’re buying it. Neon green is a color that does not exist in nature (at least not in the foods we eat). Pistachio gelato is a pale, faded, brownish-green, if it’s green at all.  If you have a hankerin’ for frozen dessert and you see ANY color in the case that looks nothing like anything you’ve ever seen in nature, run away! Or at least to the nearest Ben & Jerry’s.

Two final inviolable gelati axioms: always look for flat paddles and seasonal flavors. Gelato should be served with flat paddles, not ice cream scoops, because properly made gelato is served at a higher temperature and is meant to be savored more slowly — the better to appreciate its silky intensity. Ice cream scoops are for bad gelato and mile-high scoops of rock-hard Baskin-Robins.

As for the final test of what separates great gelati from bad, it should be obvious to you. At this point in our relationship, Eating Las Vegas should not have to explain to you the importance of seasonality in everything you eat. But, on the slim chance that you are a wet-behind-the-ears budding gourmet who still thinks eating tomatoes in January is a good thing, here goes: any gelateria that serves fruit or berry flavors in February is doing so from a mix, or using fruit extracts, not real fruit. The gelati might be tasty — the same way supermarket candy is — but it ain’t the real thing.

Industrial crap is everywhere. It is sold by the truckloads on the premise that the bigger, the brighter, and the junkier the gelato:

….the more likely Americans are to swoon over it like a ten-year old.

But you, loyal ELV reader, are no child. Nor are you an unthinking adult, burdened and brainwashed by years of shit food and crappy commercials. You, like ELV, are always in search of the best of everything — the purest, most intense, honest evocation of the cornucopia of palate pleasures that nature places before us. So, verily we say to you: if you want the best gelato in Las Vegas, there are only two ways to get it — at one of our finest restaurants, or at Gelatology – Desyrée Alberganti’s just opened ode to frozen on south Rainbow.

After a brief but successful run downtown at Art of Flavors (which has reopened as one of the gelato shops warned of above) Alberganti has brought her immense talent and unique brand of pasty chef-driven flavors to the southwestern part of the valley, where, no doubt, she will build and entire new legion of fans eager to taste artigianale gelato the way it is made in Italy.

It is not the easiest place to find,* however. Meaning: it is not visible from the street, and is in one of those shopping centers where you have to first find the address (waaaay south on Rainbow), then find out how to get into the center, and then poke around the insides of the not-visible-from-the-street shopping center in order to locate the not-that-visible small storefront that reads thusly:

Inside you will find Desyrée (pictured at the top of the page with daughter Gabriella), smiling and serving to her hearts content.

And by “to her hearts content” we mean gelato and pastries that she’s been making for the previous twelve hours….from scratch…all naturally… from flavors, fruits and  whatever frippery she has personally smashed, chopped, pureed, cooked, extracted, baked or boiled to elicit the strongest, cleanest, most intense sensations possible. When Alberganti says she is serving a bread pudding gelato, it means she personally baked a bread pudding a worked it into the her fiore di latte (the milk base of all her gelato flavors). Just as good as her milk based products are her fruit flavored sorbetti – wonders of purity that will have you doing a swoon dive of your own into flavor after flavor.

This is tremendously hard work. It is so much easier to buy the stuff ready-made and dish it out by the bucketful to screaming kids and know-nothing adults.

But Alberganti knows her audience and her audience knows her. Even on her second day open, we ran into people who had driven all the way from Centennial Hills for a taste of the real deal, that, by the way, looks like this:

Do you know why they come (and will continue to come) from far and wide for a taste?

Of course you do. The fact that you’re reading this  means you know how to appreciate the best of everything…and will accept no substitutes.

No matter how far away (or difficult to find) it is.

Gelatology is harder to find than:

> a mechanic with clean fingernails

> an Alpha male in a Kardashian household

> Rabbis at a Carolina pig pickin’

> anything funny in a network sitcom

1 thought on “Going Gaga For the Good Stuff at GELATOLOGY”