After a meal at Carnevino and having one of their amazing 90-120 day aged cuts of meat, I’m going to have to totally agree with Mr. Curtas’ classification of them as one of the best steakhouses in the country (his repeated, vitriolic endorsement certainly motivated me).

It’s like if the cold-war era wasn’t fought over nuclear stockpiles, patrolling bombers, and space travel, but rather steaks.  And while the Kremlin was trying to cross breed a Holstein with a Pachyderm, or putting the first person to stop clapping for Stalin in an abattoir, we were perfecting Carnevino.  Behind the facade of a giant Italian castle’s dining halls, there is a well-oiled (with artisanal olive oil, of course) machine working in back and off-site to turn cows into gold. 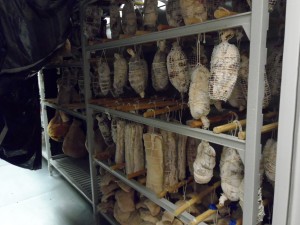 The Head Honcho, Exec Chef Nicole Brisson is a true Gangsta for real.  I was quite pleased to find that she was doing a couple items with ramps, an east-coast seasonal foraged green, that I was interested in trying.  In fact, I ended up trying quite a few things.  I would even go so far to say, just weighing in on food alone, Carnevino could stand as a wonderfully unique and creative restaurant even if there were NO STEAKS on the menu.

A steakless steakhouse would, in nearly all cases, just be a place full of tables and no customers.  Carnevino would make up for it by having an amazing sommelier, a truly inspired mixologist (David Cooper never fails to impress, and the Farmer’s Market cocktail is a testament to cocktails “with the seasons”), and some damned good food.  For example: this Dungeness crab salad, just lightly dressed with herbs and creme fraiche, on butter lettuce, kumquats, and “surprise” avocados.  “Surprise” is a variety that is about the size of an ostrich egg, and decadently creamy and tangy inside.  All came together as a perfect highlight of the super-fresh crab. 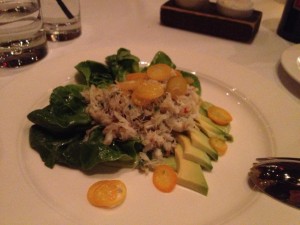 Also from the Sea, we have their grilled octopus.  While just as tender as other on-strip places that have mastered the cephalopod family, these thick logs of tentacle meat were definitely more solid than the rest.  They didn’t fall apart or get stringy as others can, but had the consistency of… super-firm tofu.  Something like that.  Either way, it’s a hearty bite with pickled root vegetables and a tangy limoncello sauce.  An interesting addition on the very bottom, thinly cut raw-ish octopus turned into a kind of carpaccio.

I was there for ramps, and they were utilized wonderfully in this stracciatella with charred ramp pesto.  I had no shame, I got DOWN in this stuff.  The ramps gave an interesting aromatic, but green, flavor that when stretched out with the fresh creamy cheese, was amazing.  Bite after bite it was just so unique and satisfying, I nearly took it down myself. 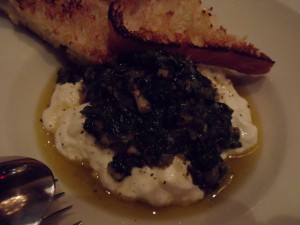 Now, I love steak tartare.  I love it almost everywhere, and I’ve rarely been disappointed.  Compared to the “Carne Cruda alla Piemontese”, I feel like I’ve been eating a wet messy SHAM 90% of the time.  This is substantial tartare, that actually tastes like a danged steak!  Perfect bit of tang, perfect hints of mustard, and I’m sure “chopped to order” doesn’t hurt.

Now I said before, and remain steadfast, that Carnevino can stand as one of the best Italian places in town even without their world class steak service.  However I would be a FOOL AMONG FOOLS if I went there and didn’t sample that heavenly aged beauty.  For your approval, a 90-day aged bone-in New York Strip, seared and finished to perfection, finished with just a little drizzle of super-fine olive oil.  The aging gives the meat this interesting rich, liver-like, foie gras kind of flavor, in addition to the natural meat tastes.  The table-side carving by a sharp looking young man in a suit only adds to the experience. 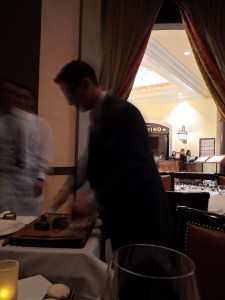 Beautiful, no matter which way you slice it.  I swear I got chills, a guy in a Brooks Bros. suit slicing such a  steak like a surgeon is practically pornography.  I haven’t been to every steakhouse to hang a shingle in this town, but damn if I don’t know I’m in one of the best when I’m at Carnevino.

3 thoughts on “CARNEVINO: Grandmaster of Meat”