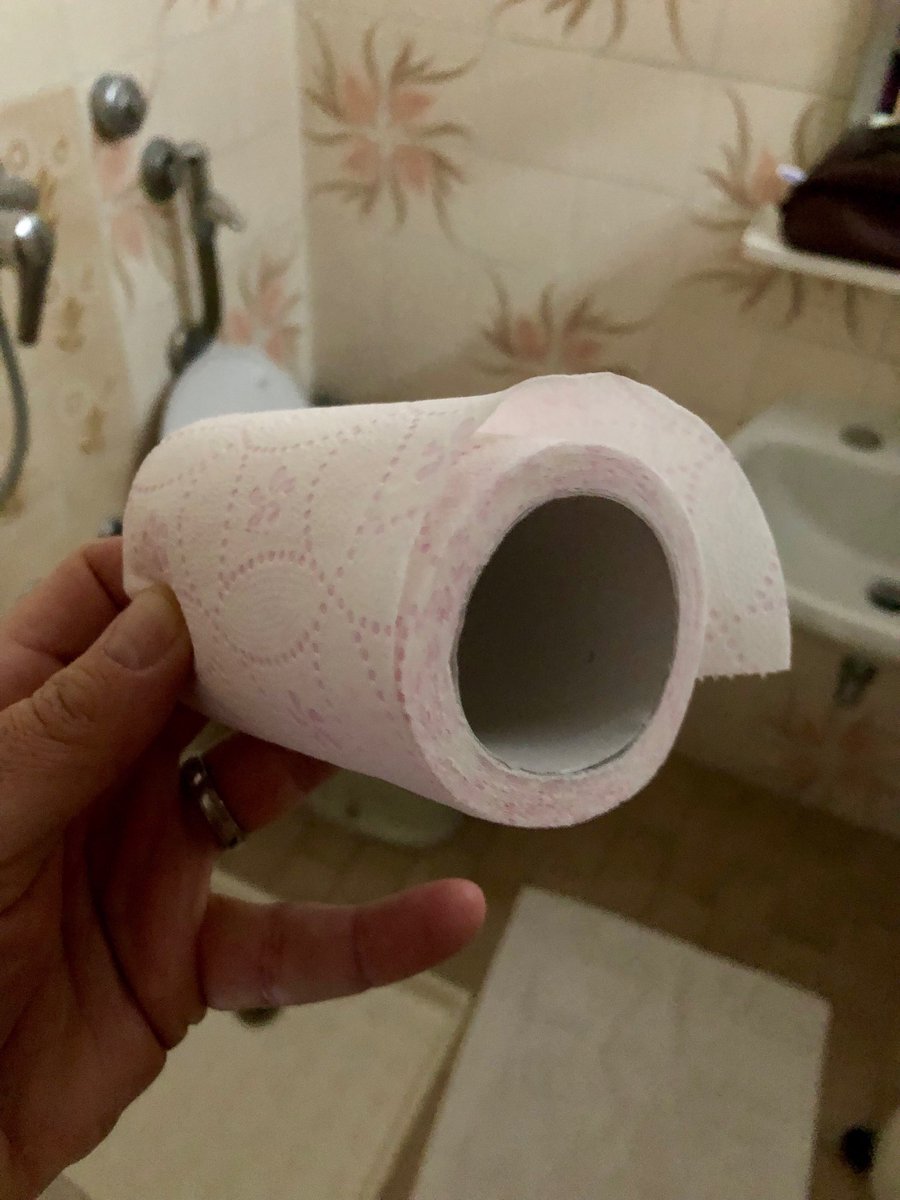 I’m no Rick Steves, but I probably eat a lot better than he does when I travel across the pond. Sightseeing and history are secondary, even tertiary, to my gustatory pursuits in Europe, but having been there five times in the past three years, I know a thing or two about what makes a successful vacation when you’re traipsing around France, Germany and Italy. Some of the following tips will be obvious, others will be old hat to seasoned travelers, but all of them will make the ride a lot smoother, and leave you more time for whatever fun you’re seeking in a foreign country.

Speaking of smooth…take your own toilet paper. We’ll spare you the details, but let’s just say there isn’t a worse-designed personal product in the world than European toilet paper. Imagine a razor without a blade; Kleenex that doesn’t kleen; moisturizer that isn’t moist….that’s Euro hotel t-p. Plus it’s scratchy; plus it takes twice as much to do half the job. Plus, they give it to you in barely-there rolls designed to last maybe a day (see above), and since you have to use so much of it, you’re constantly in the position of having to ask the never-there staff for more. Needless to say, this never happens at a convenient time.
The bottom line is Euro t-p is designed to do one thing: dissolve in water as quickly as possible. This does not make for a good human/toilet paper relationship. What it makes is a mess. So wipe the slate clean, and save yourself a lot of unpleasant agitate — take a big, fat roll of Charmin, remove the center cardboard, smash it down, and stuff it somewhere. Your ass will thank you. No ifs, ands or buts about it.
Pack a pair of sturdy, heavy-soled shoes. The heavier the better — think Doc Martens — unless you enjoy having the bottoms of your feet to be turned into steak hâche on the sharp and cobbled streets you will inevitably encounter…everywhere.

Get a portable wi-fi. I always have my webspot waiting for me at my hotel when I first get to the continent. It costs about 10 euros a day and are more than worth it if you plan to be on your phone a lot. (And who isn’t on their phone a lot these days?) Portable wi-fi may be heavy (it’s about the size of a pack of cards and weighs as much as a small hand grenade), but it saves on roaming charges and makes accessing all your platforms and apps a breeze.

Don’t bother converting your currency into euros over here before you go over there. Use cash as little as possible. Get off the plane, clear customs, and find an ATM in the airport, and get a few euros for walking around money. Pay with your credit card as much as possible — that’s where you’ll get your best exchange rate.

One of those electric current converters is also essential. Pack two of them if you use a lot of electronic devices, but know that electrical outlets in European hotels are scarcer than washcloths, bar soap, and fluffy pillows. 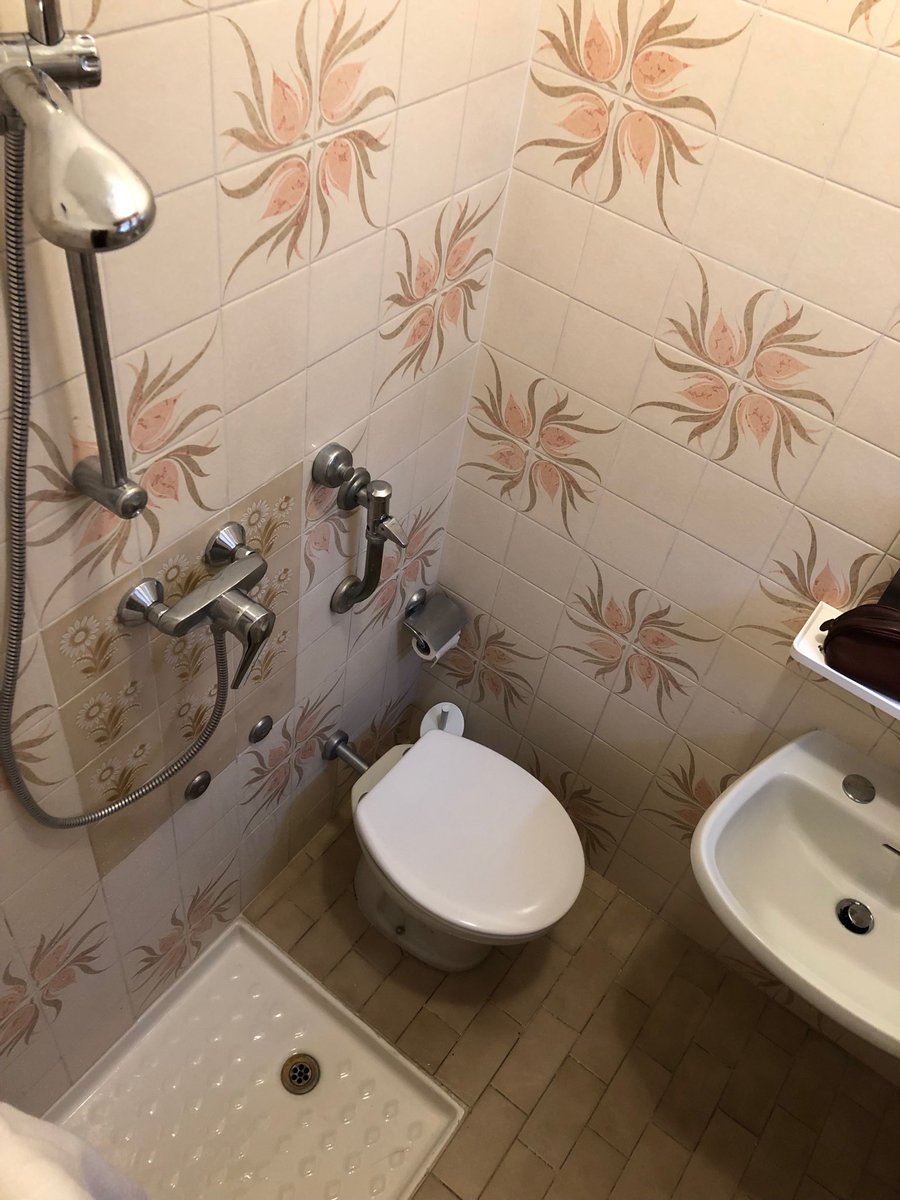 Speaking of which — if you like to use a real bar of soap and a wash cloth when you bathe, pack those too. How an entire continent can clean itself in shoulder-width showers with minuscule water applied at awkward angles without much suds is a mystery that may never be solved. European bathrooms are marvels of reverse-engineering — designed with the opposite of comfort,  convenience and efficiency mind.

They’re also allergic to shower curtains – see above. The contortions you will employ to get yourself clean from head to butt cheeks would impress a yoga instructor. On the plus side, you can shave, shower and s____ without moving an inch.

Go online and arrange for Global Entry — it makes clearing customs a breeze, unless you enjoy waiting behind a thousand people to get your passport stamped after a 9 hour flight.

Sign up for Uber and Lyft, but know that in some cities they are ubiquitous (Paris), and  in others, it’s easier (and almost as cheap) to take taxis (Milan). Also know that in many small towns, rideshare companies have yet to make any inroads. In Venice, for example, because there are no roads in Venice.

Consider taking the train between cities rather than flying. Flying around Europe is as much a pain in the ass there as it is here. The airports are huge and located far away from most Euro cities. (The Milan to Malpensa ride can easily take 90 minutes.) And nothing gets better when you arrive. The airports are a slog from the moment you hit the curb until you find your plane. Then, it’s an easy 1+ hour hike to or from your gate, and then to a car or taxi that will charge you an arm and a leg to get to your destination city. (We’re talking $100-200 cab rides here, folks, with Uber being cheaper….but not by much.)

Between the traffic, and the cab expense, and the hour-long airport walks, inspections, etc., a train is often the better option. We took a 6 hour train ride from Paris to Milan and it was fabulous. When you calculate all the to and fro time a flight would cost, we probably spent an extra hour or two on the train, but the comfort, relaxation and spectacular views made it more than worth it. 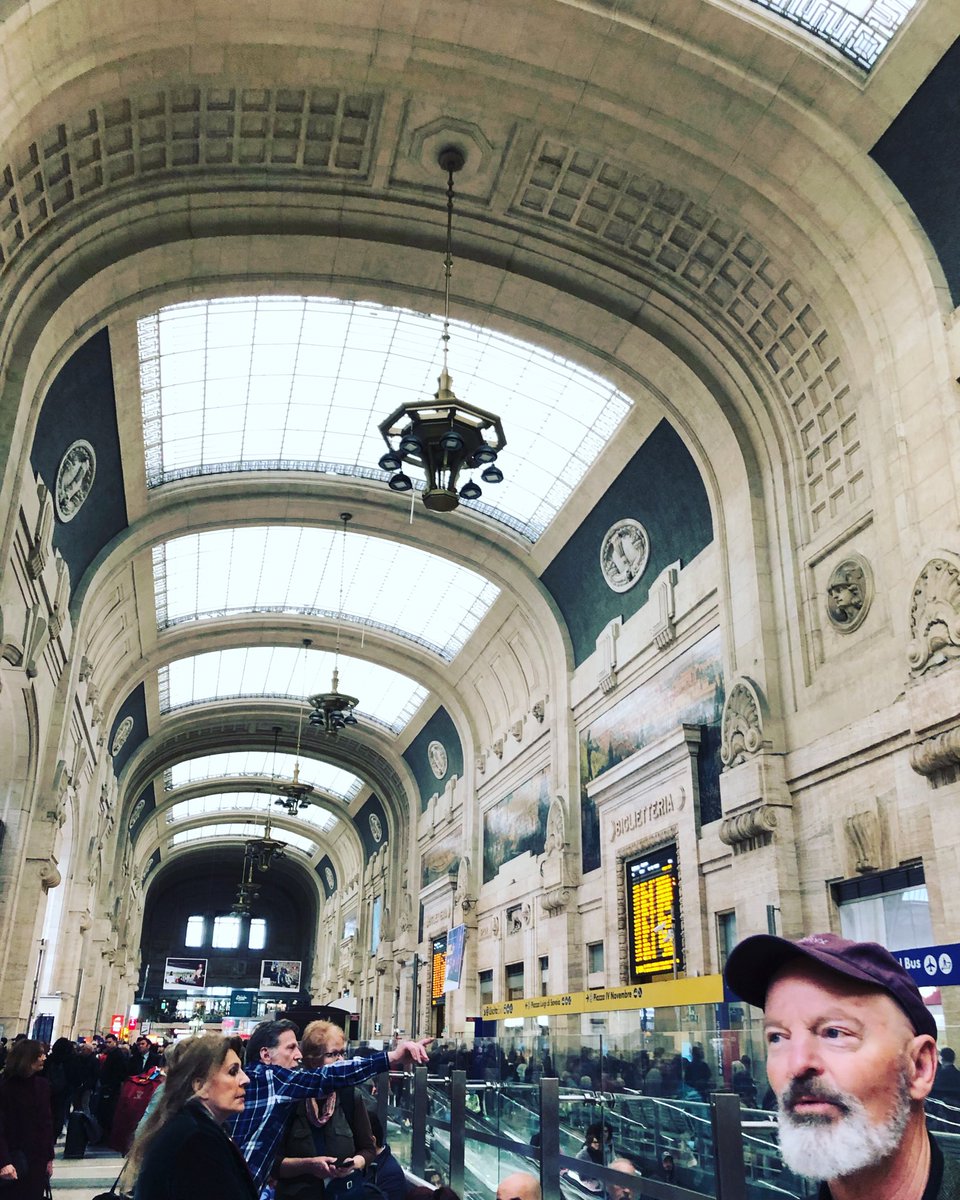 (My buddy Bruce is a first-class train station navigator)

I won’t deny it: there’s something vaguely scary about European train stations, They’re always mobbed (except in the early morning hours), and the foreign language and pandemonium can be intimidating. But if you book your tickets on-line (which everyone does these days), the only real issue is fighting the crowds and finding which platform your train leaves from. Once you’re on board, it’s smooth sailing in comfortable seats that allow you to arrive refreshed….not worn out by the fourteen different steps it takes before you can board a fucking airplane.

The only real downside to train travel is lugging your suitcase up and down those steps. Soooo….pack light. And by “pack light” I mean a single suitcase you can sling up a flight of stairs without breaking your back. No one helps you with your luggage on a train. The schlepping is all you, so consider how many times you’ll be lifting your bag about four feet off the ground when you pack it.

Jackets and ties are optional. Yes, even in stuffy old Europe, men are going to dinner in fine restaurants in nothing but a shirt and slacks. (Shorts and t-shirts, however, might get you turned away at the door in some establishments.) Even an old suit/sports coat guy like me has gotten with the program. I no longer constrain my throat with the inhibiting lashings of formal neck wear. Instead, I’ve decided to wear nothing but ascots.

Seriously, it is a major sartorial faux pas to enter certain restaurants in London or Paris without a jacket on, but unless we’re talking about a haute cuisine palace, you can get away with a nice shirt these days.

Unless you’re headed to the beach, leave your shorts at home. (I’m talking to the men here.) Ditto your open-toed sandals. You might enjoy looking like shit in your hometown, where, no doubt, all the men look like shit, but shorts on a man in Europe peg you as an ugly American, or, even worse, a German.

This is the first part of a two-part article about my recent trip to Europe. Part 2 – How to Eat in France and Italy – will appear later this week. 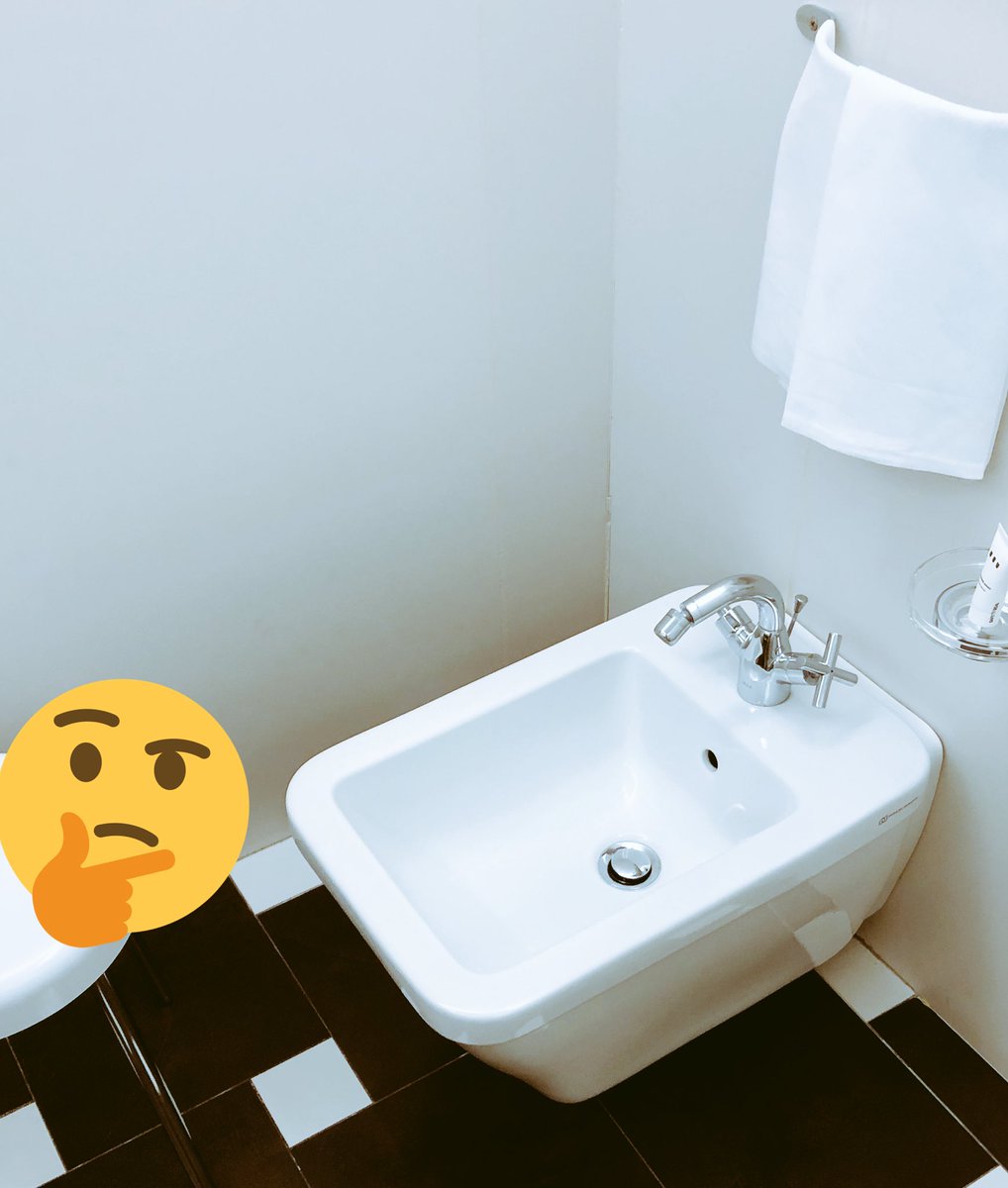 (One thing I’ll never figure out is why do they put their drinking fountains so close to the floor?)