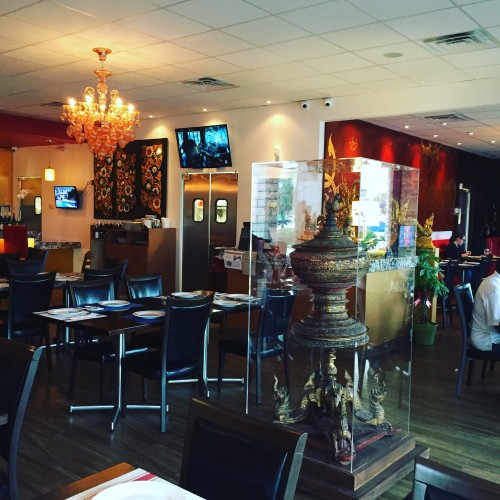 Weera Thai has had quite the facelift.

It’s doubled in size, expanded its menu, and upgraded everything from the placemats to the garnishes.

The good news is the food is better than ever, with an expanded menu of Loatian and Issan specialties that are a must-try for the intrepid Asian food explorer.

And the best news of all is that my loyalties are now divided four ways when it come time to Thai one on: Lotus of Siam, Chada Thai, Chada Street, and Weera.

This is food that pulls no punches, so strap yourself in, order a Singha beer (or three) and be ready to get blown away by everything from the raw shrimp:

…to the duck pad Thai:

This food is as in-your-face and aggressively seasoned as we imagine it is in Siam. And although we’ve never pinned down chef/owner Peter Weera about his recipes, it always seems to us that he uses better groceries than many run-of-the-mill Thai joints around town.

One thing is for sure: He doesn’t over-indulge the Americanized Thai taste for gloppy sweet-hot sauces, preferring instead to stay true to the pungent accents of his homeland.

Like we said, buckle your seatbelts and keep things at medium hot, and you’ll be in for one Thai-rific ride.

2 thoughts on “WEERA THAI Grows Up”