(ELV note: Ever since he returned from Dallas, ELV has had an uncontrollable urge to talk like a Texan. As you will soon find out.)

Itsy Bitsy Ramen and Whiskey has done what something we thought impossible: bring a steady stream of downtown diners to the north side of The Ogden building. Between the somewhat obscure location, and the bad juju of the former occupant, this space was permanently jinxed in our minds, and destined to become a vacant storefront for years to come.

But you’ve got to hand it to the folks behind the redesign (see above) and to chef Ricardo Romo, because between them, they’ve reinvigorated a challenging spot, and rounded out your dining options whenever a downtown pub crawl captures your fancy.

Before you git to a-thankin’ this here’s gunna be one of them thar rave review-thingees that ELV — the man, the myth, the shameless promoter of all things downtown Las Vegas — is gonna write about another East Fremont Street establishment, let’s git one thang straight between us, pilgrim: we like the food at Itsy Bitsy, but don’t love it the way we love, say, Monta’s, Ramen Sora’s or I-Naba’s various noodle soups.

And while we’re on the subject, pardner, let’s make one thang as clear and bright as a moonbeam on a cow’s ass: this whole Asian-affinity-thing for giant bowls of noodle soups is and always will be a mystery to us. We’ve never even come close to finishing one, single, freakin’ bowl of any ramen, pho, Taiwanese beef noodle or saimin soup placed in front of our hungry selves. Whatever hunger or digestive miracle drives a billion+ shortish, skinny, dark-haired, cigarette-fueled, culturally-rich, somewhat bow-legged people to inhale a half-gallon of hot liquid adorned with a pound of noodles (and then ask for more) at any one meal, is totally lost on this westerner.

And while we’re at it: the whole ramen-craze fad, whereby you see the statement-facial-hair–Betty-Boop-crowd staring intently at their broth, then vigorously parsing the differences between this or that shoyu or shio or whatever, is fueled by one and only one thing: price.

Yes, price. Ramen is cheap. It’s something a Millennial can eat a lot of and pretend to be an expert on because they can afford to eat it. In fact, it’s one of the few famous dishes a twenty-something person can eat enough of to actually, almost know what they’re talking about. Hence do you find furious arguments taking place on Yelp over what is, in the end, nothing but a f*cking soup, albeit one eaten in oceanic proportions.

If you’re one of those insufferable snobs (hey, it takes one to know one!), you’ll find Romo’s shoyu broth: 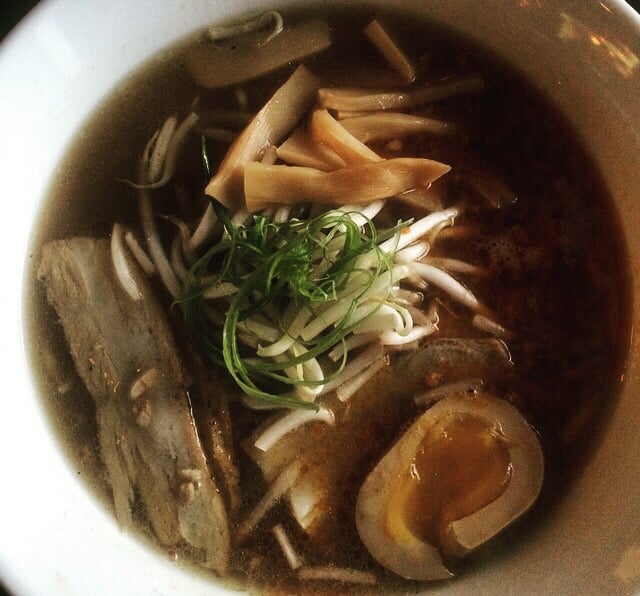 … a bit on the light side, as is his tonkotsu (pork) soup. This is not to say they aren’t darn tasty, just that Romo is intentionally dialing back some of the famous (or infamous) salty intensity you find in some of the more vaunted ramen shops.

He tells us this is being done with an eye towards our rather extreme summer weather  — that pairs with Brobdingnagian  buckets of steaming hot liquid about as well as Mariah Carey does with a steady job.

Those of you who share ELV’s disdain of Sisyphean slurping through a surfeit of starch will find plenty to like about the rest of the menu, not the least of which are the color-coded hand rolls, ….which employ cream, red and orange rice paper:

…to identify you yellowtail, tuna and salmon rolls. It’s a fun little gimmick that sets the tone for the kind of casual, fun, and foreign (as in non-Mexican, no pizza) food that this area needs.

The rest of the menu is full of the usual suspects, with the pot stickers, Japanese chicken (karaage) bites, and robata skewers being the clear standouts.

About the only bone we have to pick with IB is the “whiskey” part of its moniker. About a dozen bottles of various Scotch, bourbon and rye are offered, which is about what an average restaurant bar stocks. It is a paltry selection indeed, especially when compared to Oak & Ivy’s 50+ brands stocked a few blocks east in Container Park, and absolutely pitiful if you’ve ever been to the Jack Rose Dining Saloon in Washington D.C., where they stock over 2,000 brands of distilled brown spirits.

Having just returned from a trip to our nation’s capitol (and a sipping trip to Jack Rose), all we can say is we at ELV were more disappointed than a mud fly in a dry creek when we first saw IB’s whiskey list.

In these here parts, you and yours oughta mosey on over to Oak & Ivy to git a look-see at a genuwine whiskey bar. But before or after that, we reckon you should sidle up to good ole Itsy Bitsy whenever ya gits a hankerin’ fer a Texas-sized trench of tonkotsu.