In the plaza that is host to Lotus of Siam, about a dozen other pan-asian restaurants, and even a few places where you might find local politicians and religious leaders.  But the newest opening isn’t a Thai place, a swingers club, or an alternative lifestyle independent theater at all!  It is the first Las Vegas location and fourth overall location of Cornish Pasty Co.

Yes, once again the Brits have started colonizing, straying from their conquered home-turf of Arizona.

There is something extremely cool about the space, or rather a set of somethings.  They have a couple booths, which are re-purposed old church pews, with the hymn book shelf and everything.  Pew makers must be in dire straights these days, considering all the young folks going on reddit and instantly becoming satan-worshiping atheists.  Also, on the low-tops and bar has these big ol’ iron tractor seat chairs.  What is this, Hash House a Go-Go?  Am I Guy Fieri?  Is this “Money”?  I’ve seen these lumbar-destroying things at a couple places now, and it has gotten old before it was even new.  They more than make up for it by the fact they pump in all 80’s Brit rock.  Any place blasting Motörhead as I walk in gets a point. 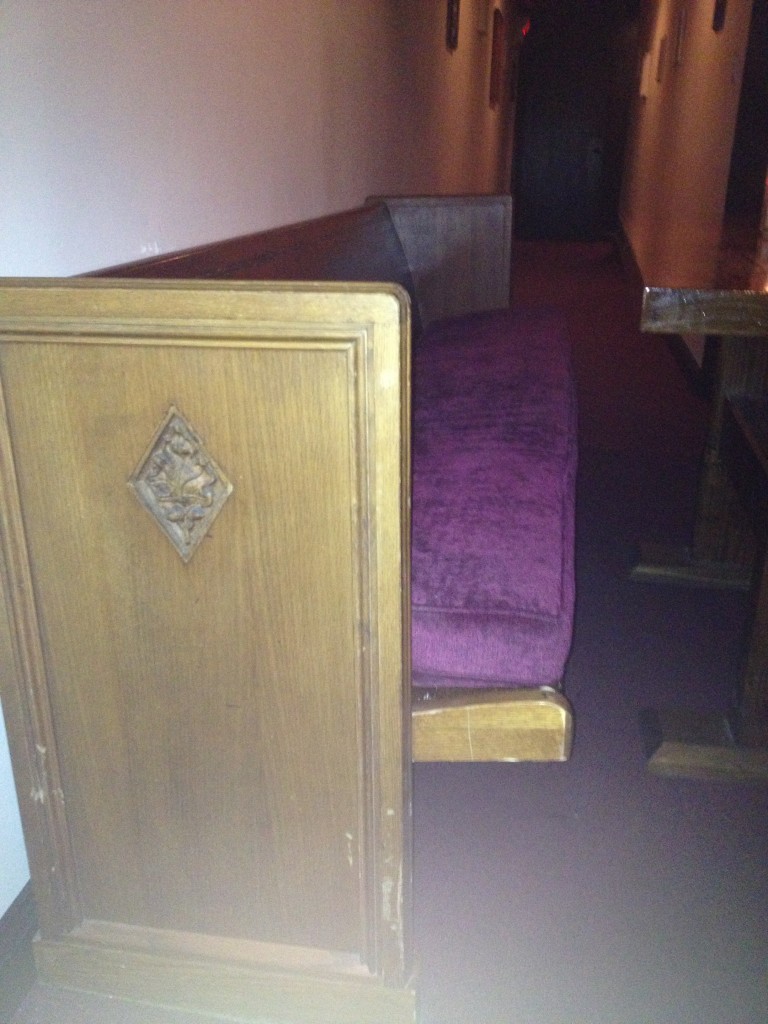 The food might you ask?  It is mostly very British.  A pasty is a bunch of meat and stuff (potatoes are usually the stuff) wrapped in what is basically a big ass Hot Pocket brand stuffed sandwich.  In fact, some of these pasties are very much like a home made Hot Pocket brand stuffed sandwich.  The Italian (Pepperoni, salami, capocollo, ham, fresh mozzarella, fresh basil, and roasted tomatoes) and the Royale With Cheese (Hamburger, french fries, grilled onions, mushrooms, bacon, cheddar, Swiss) are exactly what I would picture if some pintrest lady got the idea of making a #foodie #foodporn #homemade #HotPocketBrandStuffedSandwich #MommyBlogger.

The list of pasties has just about everything you would want wrapped in dough, and a few things you wouldn’t.  With Classic Pasties, Premium Pasties, and Vegetarian Pasties, there are 37 items.  This doesn’t include soups, salads, sides, and ‘serts (desserts, that’s what I call desserts now).  The best of them are more stereotypically British than the Queen opening a crimbo-cracker on the river Thames while listening to the White Album.

Their most traditional and most British pasty, the Oggie, has steak, potatoes, onions, rutabaga, and a side of red wine gravy.  It, for lack of a better term, is hearty.  If I was some cockney in a tin mine, I’d dig it a ton.  As it is, it’s mainly saved by the gravy, but a bit bland on it’s own, and a few of them are rather dry as well.  I know what you’re saying, “That doesn’t sound like the British food I know!”  Well, they also have a more modern but still very British “Chicken Tika Masala”, served with a mint yogurt or tahini sauce.  Damn good!  Their fascination for Indian flavors and the subsequent interpretations are interesting at least.  A fact that certainly lends some credibility to the dish:  there are parts of London that has more Indian food than parts of India has Indian food.

For something a little more central European, there is the “Porkie”, with pork, sage, apples, and onion.  Could use a bit of fennel to go fully breach the Rhine into German territory, but otherwise quite the tasty pasty.  In the soup category, only one really is worth making the leap, their creamy walnut, mushroom, and spinach.  However, any of them are a good choice when they have house-made soda bread and Irish butter on the side.  Sides, salads, all pretty straight forward.  I mean, you’re there for the pasties, why divert?

There is one reason to divert.  THE ‘SERTS.  Holy mother of jeepers, these desserts.  Bread and Butter Pudding, a scalding hot little sweet and salty layered square of bread pudding, topped with dark chocolate brandy sauce, and a side of ice cream or creme anglaise.  Perfect balance, surprisingly complex, VERY decadent.  The “Shirley Temple’s Pudding” (R.I.P in Peace) is a sticky toffee pudding worthy of the lil’ darlin’.  It comes still bubbling in a little iron cauldron and is made with imported British treacle (basically golden molasses), with the aforementioned ice cream or creme anglaise.  Let me tell you, and I may need to do a side-by-side first, but I seriously think it may be the best sticky toffee pudding in town, even better than the one at famous Gordo Ramrod’s steakhouse.  It is a damned good sticky toffee pudding.

The place is fun, the food is pretty alright, hell they even have a good beer selection, and they are two-for-two on ‘serts.  If you’re hungry, eat there.  G’wan, git.