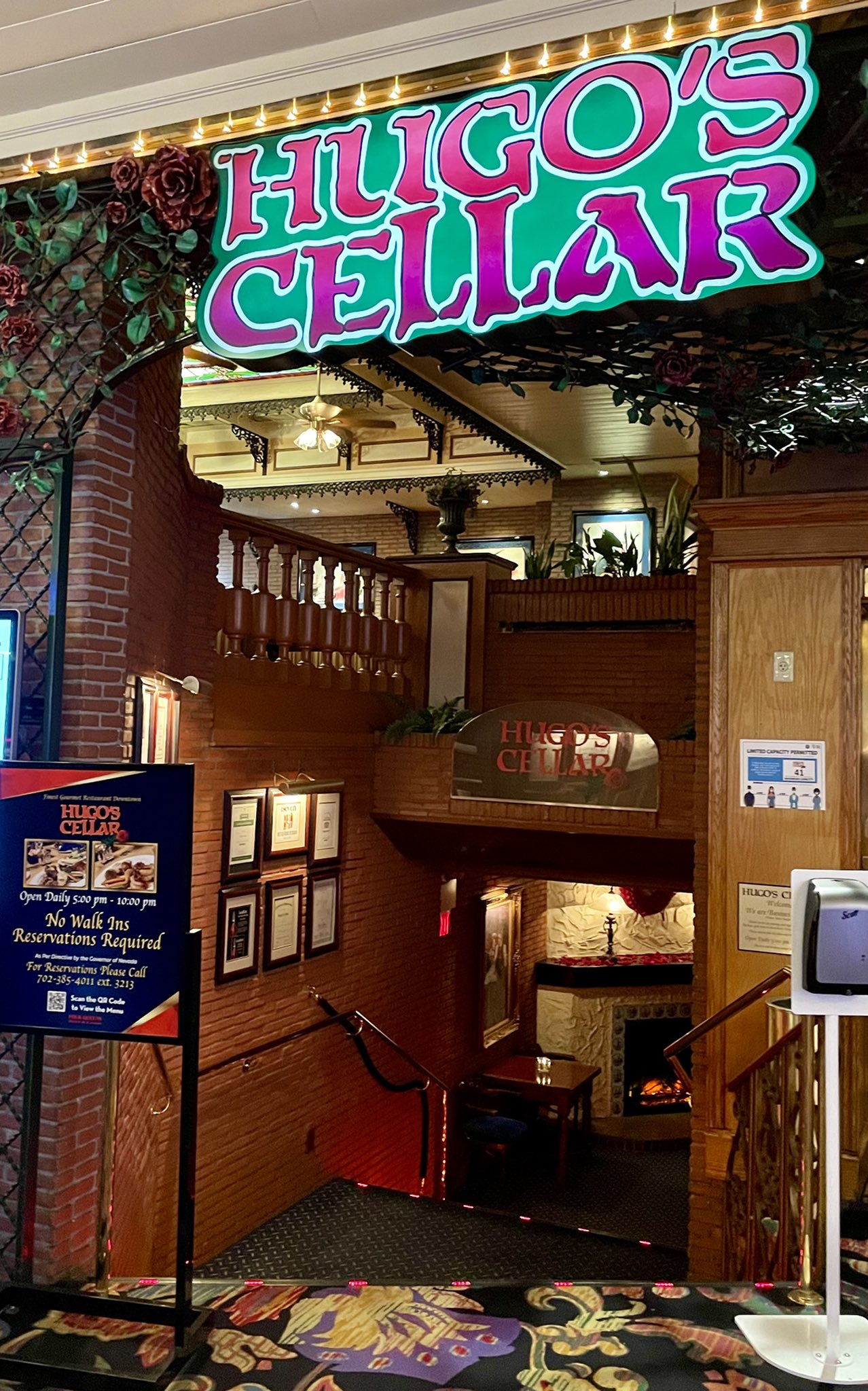 If you really want to get deep in the philosophical weeds sometime, try thinking too much about what constitutes “good taste.” Objectivity, subjectivity, professional norms, expert opinions, philosophical treatises*— they’re all there to dazzle and confuse you.

There is no accounting for taste, the saying goes, and trying to impose your ideas of such on another is a losing proposition. Some people love Mozart; others favor the banjo. You may be anosmic, your wife may be a super-taster. Many upwardly-mobile types crave the furnishings they see in design magazines, while an Italian countess would scoff at such monochromatic dreariness.

Of course, the best tasting things generally could be said to be in good taste, but the converse might not be true. (See, I’m already confusing you.) You might find the sour, aged pungency of classic Roquefort cheese to be exquisite, and ordering it might be thought of as being in the best of “taste,” but it is easy to imagine that others might find such bracing, cultured gaminess repellent — to their palate if not their less-sensory sensibilities.

I could argue that people like big, jammy California wines because they haven’t learned to appreciate the nuances of Pinot Noir (in the same way a music teacher disdains rock and roll in favor of Miles Davis), but to many, the former taste good and the latter do not. Does this mean I have better taste than they do? I would argue yes, but they could argue just the opposite and they would not be wrong.

Good taste is accumulative. Good taste is experiential and highly personal, and at the end of the day, it is not worth the contentiousness to argue otherwise. Which is why one can view the enduring popularity of Hugo’s Cellar only through the lens of those who love it. 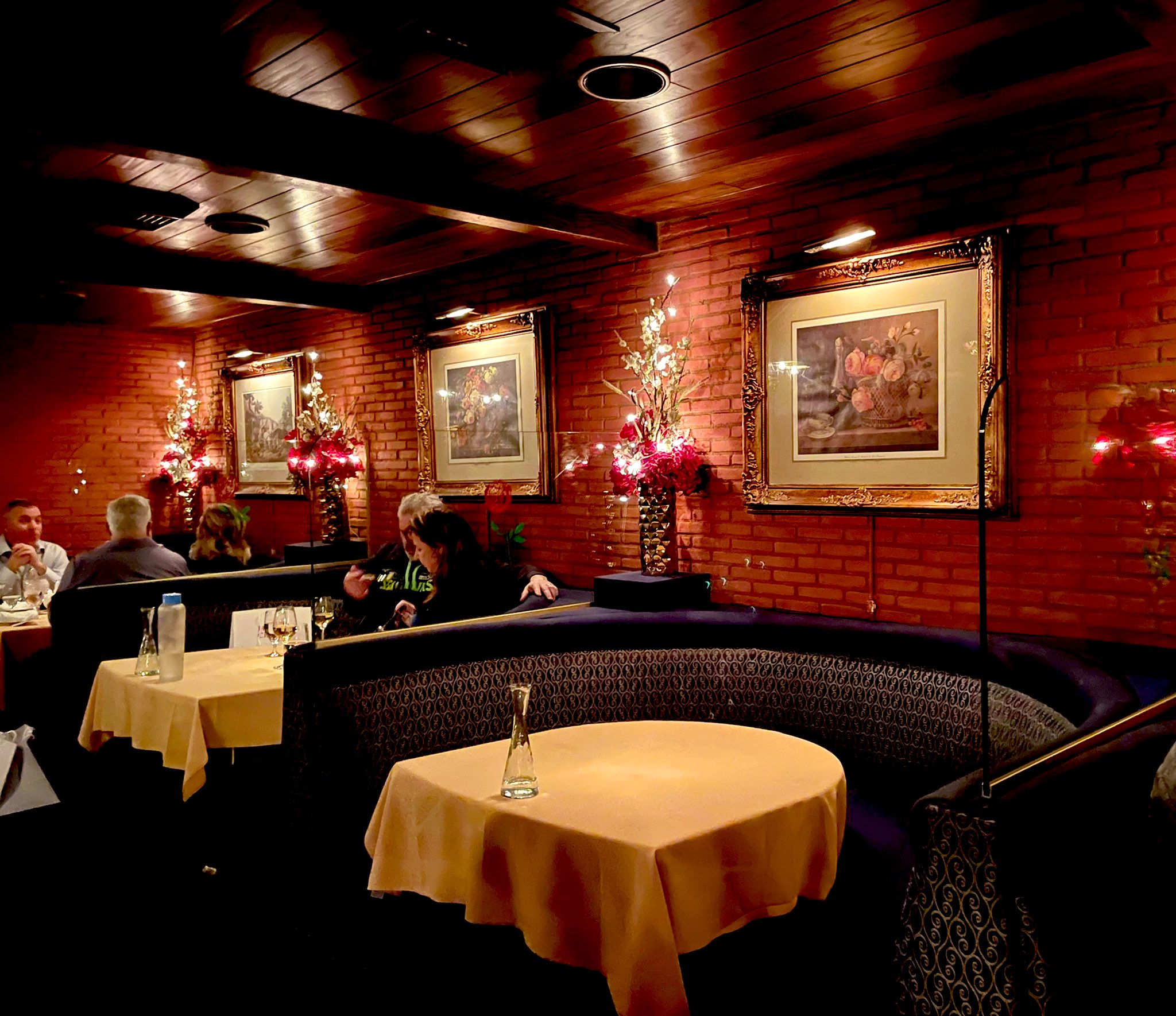 To love Hugo’s you have to enjoy getting there. And to get there, you have to negotiate the casino floor of the Four Queens — a joint that’s been around since 1966 and has the decor to prove it.

Saying the Four Queens has seen better days is like saying Rudy Giuliani might have a bit of an image problem.

Many have trod here over the decades — locals and tourists alike — strolling to the short stairwell in the middle of the casino which descends to the “cellar” (top of the page).

What they seek when they enter is not “good taste” but, to their minds, something that simply tastes good. To many, this is what Hugo’s is and always has been: a trip down memory lane. This is what “gourmet” was back in the 80s and this is still how it ought to be, right down to the two sides on every plate. Hugo’s revels in its homage to the Seventies — a glorious ode to the kitschy dining of yore. And it does so without apology and with blissful ignorance of how restaurants have evolved.

Almost as fair warning, the menu is posted at the top of the stairs. Being both very long and difficult to read, it serves as a cautionary tale to anyone who thinks there will be cartwheels done in this kitchen. Along the staircase walls you’ll find the awards, most of which are for a wine list that would’ve been pretty impressive in 1992.

At the bottom of the stairs you’ll find a fake fireplace and the kind of brick paneling that was last in fashion when triple-knit leisure suits were all the rage. There is “art” on the walls too (having nothing to do with food), which provides an ersatz sense of hominess. and a low ceiling (and carpet) to enhance the coziness — the whole effect being to remind you of grandma’s rumpus room, circa 1969.

Thankfully, the carpet isn’t shag, although it really should be. 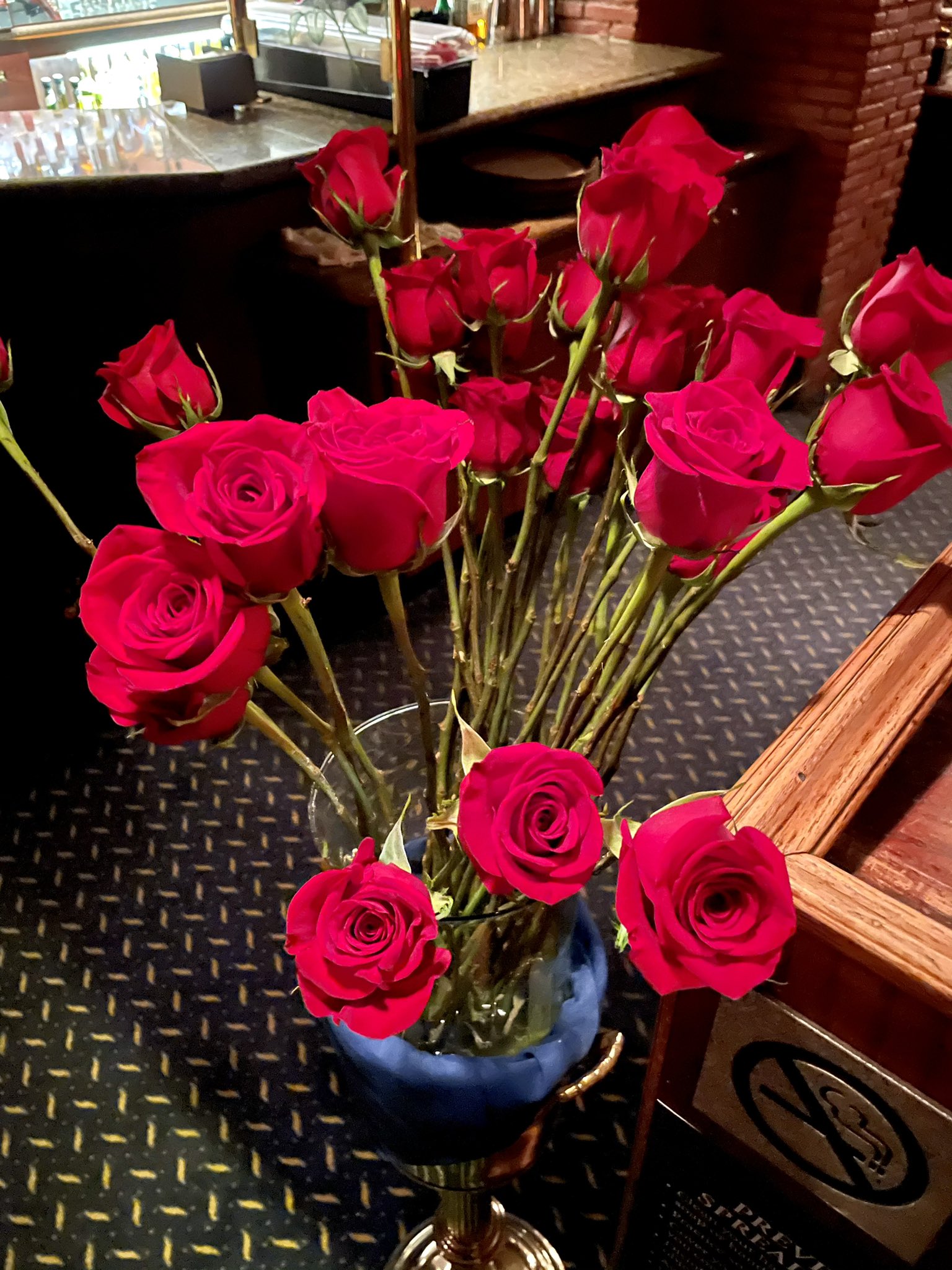 (An LBGTQ conundrum: who gets the rose?)

“Always a Touch of Class” is the tag line for the restaurant, and the promo materials offer “romantic and elegant dining with exquisite service in a casual setting.” We’ll leave it to less generous folks to parse the veracity of these assertions, but be forewarned: there is nothing casual going on when it comes to prices.

When it comes to the cooking, there is not a modern thought on the menu. No tweezer food here, no siree! This is protein, starch and veggie territory, gussied up just enough to justify the tariffs.

Here you will find such stalwarts as a table-side salad carte ($22); Fire-Grilled Chicken ($47); a very good Beef Wellington ($69); and a Chateaubriand for Two ($175).  By comparison, the crab cakes ($22) and escargot ($19) seem like relative bargains. By design, the menu lists all pricing in script (as in “Forty-six dollars” for vegetarian, ricotta-Stuffed Jumbo Shells), presumably to soften (or disguise) the sticker shock.

Appetizers arrive without fanfare and without finesse. Calling the crab meat “lump” is a stretch, but it’s is cooked and seasoned well, with a piquant citrus aioli to spice things up. Those nineteen dollars escargot are topped with a little puff pastry hat, no doubt plopped thereon to convey fanciness. After these, the salad carte arrives (beware any noun with a superfluous “e” attached) and things begin to nosedive. 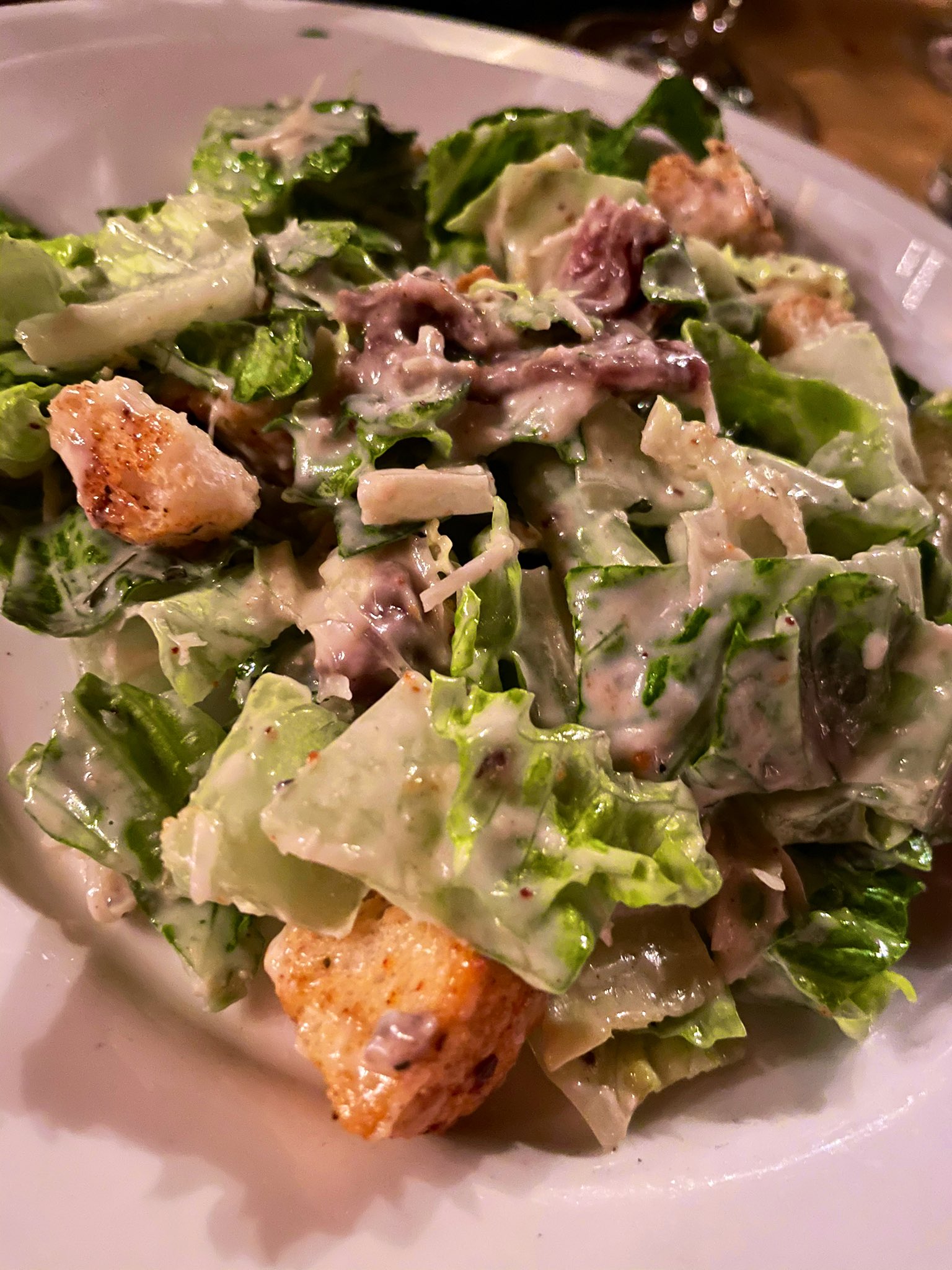 What may have seemed charming forty years ago, now appears formulaic and metronomic, as the staff** goes through the motions with all the enthusiasm of a mortician embalming his 5,000th body.

At their first “performance” (after bored menu recitations and silverware dropped (literally) on the table), you notice the too-cold lettuce drenched with pre-made dressing (above). Then comes the accoutrements showmanship comprised of the following: “You want anchovies?” Mr. Personality inquires. “Yes, please,” and in they go with all the panache of a cop writing a traffic ticket — all of it to no great effect, other than the oohs and ahhs of other tables. You’re basically at a by-the-numbers salad bar with your own, sullen salad-tosser.

At some point a “palate cleanser” shows up in the form of a small scoop of sorbet sitting in one of those sugar cones boasting the structural integrity (and taste) of balsa wood. About the same time, a second bread basket replaces the first and is just as stale. 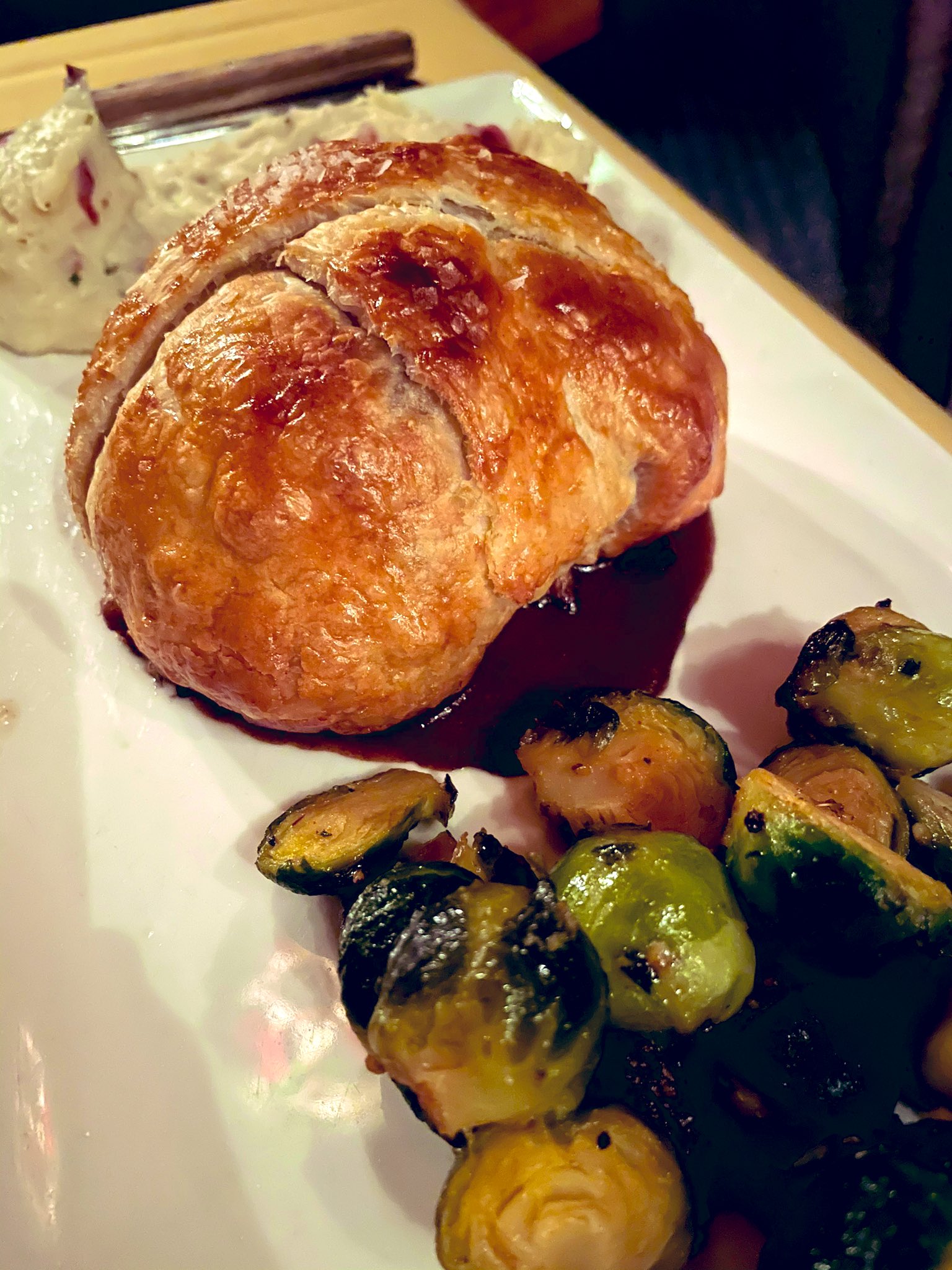 Then, your sixty-nine dollar Wellington arrives (above) and the head-scratching begins. “Who is buying this stuff?” you ask yourself. Are the tables of cargo shorts enamored of sixty dollar steaks? Are the nice, 70-something gray-hairs behind you wowed by fifty buck Raspberry Chicken? Perusing the wine list, you see pages of bottles costing hundreds of dollars, and you’d bet your last Bonnes Mares Burgundy there hasn’t been a three-hundred dollar bottle of Bordeaux sold here in this century.

But the crowds come, oh yes they do. All I had to to was put some pics of Hugo’s on my social media platforms and dozens of “I love that place,” and “so romantic” comments came pouring forth.

What do they love, exactly? And in what “good taste” do they trust? This is where you have to get philosophical. What Hugo’s is selling is familiarity. And memories. And consistency in the service of 1970s banality. The very things a food snob might criticize is what keeps the customers coming back. 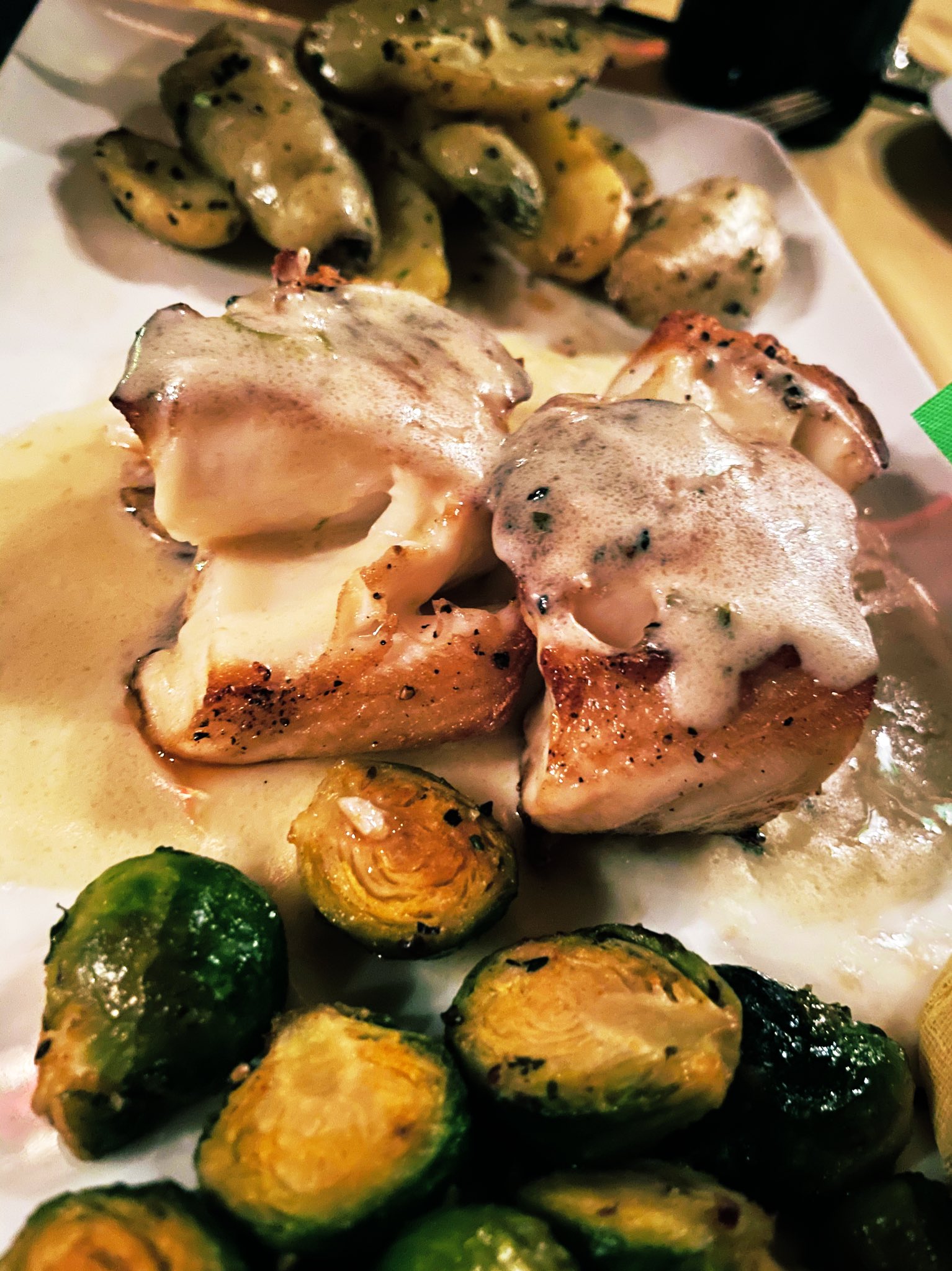 Sure, the twenty-one dollar prosciutto-wrapped shrimp is way too salty. Of course the fifty-five dollar Maple Bourbon Duck is a bit overcooked and none too crispy. But who cares if the seventy-one dollar sea bass is dappled with a sorry excuse for Béarnaise? Nobody here wants to be challenged or dazzled by their food, they just want to be filled up by stuff they wouldn’t cook at home.

And at that level, Hugo’s fills the bill — this kitchen has churned out these dishes this way for so long, they meet the customers’ expectations like an episode of “Murder, She Wrote.”

If dessert you must, then the nineteen dollars Bananas Foster are flamed table-side for your amazement. The seven dollar Dessert Cart (no “e” necessary when you’re charging less than a sawbuck), looks to be straight from 1983, the first time I ever entered this time warp. They also give every female a long-stemmed red rose upon entering, which apparently also amazes the minions. (Pity the poor hostess who has to handle this transaction with the transgender crowd.)

Is any of this in “good taste” by 21st Century restaurant standards?

Absolutely not, and that’s exactly the point.

*”Subjective universal judgments,” is how Immanuel Kant put it. In Kant’s world (the world of an 18th Century German philosopher – a world without black velvet Elvis “art”), the judgment that something is beautiful or sublime is made with the thought that other people ought to agree with this judgment — a sensus communis if you will — a community of taste, agreed to by a consensus of society. All of which sounds plausible until Slim Jims and Celine Dion are brought into the mix.

**to be fair, our sommelier was charming and helpful. The rest of the staff, when they spoke, acted like they were reciting the Pledge of Allegiance at gunpoint. 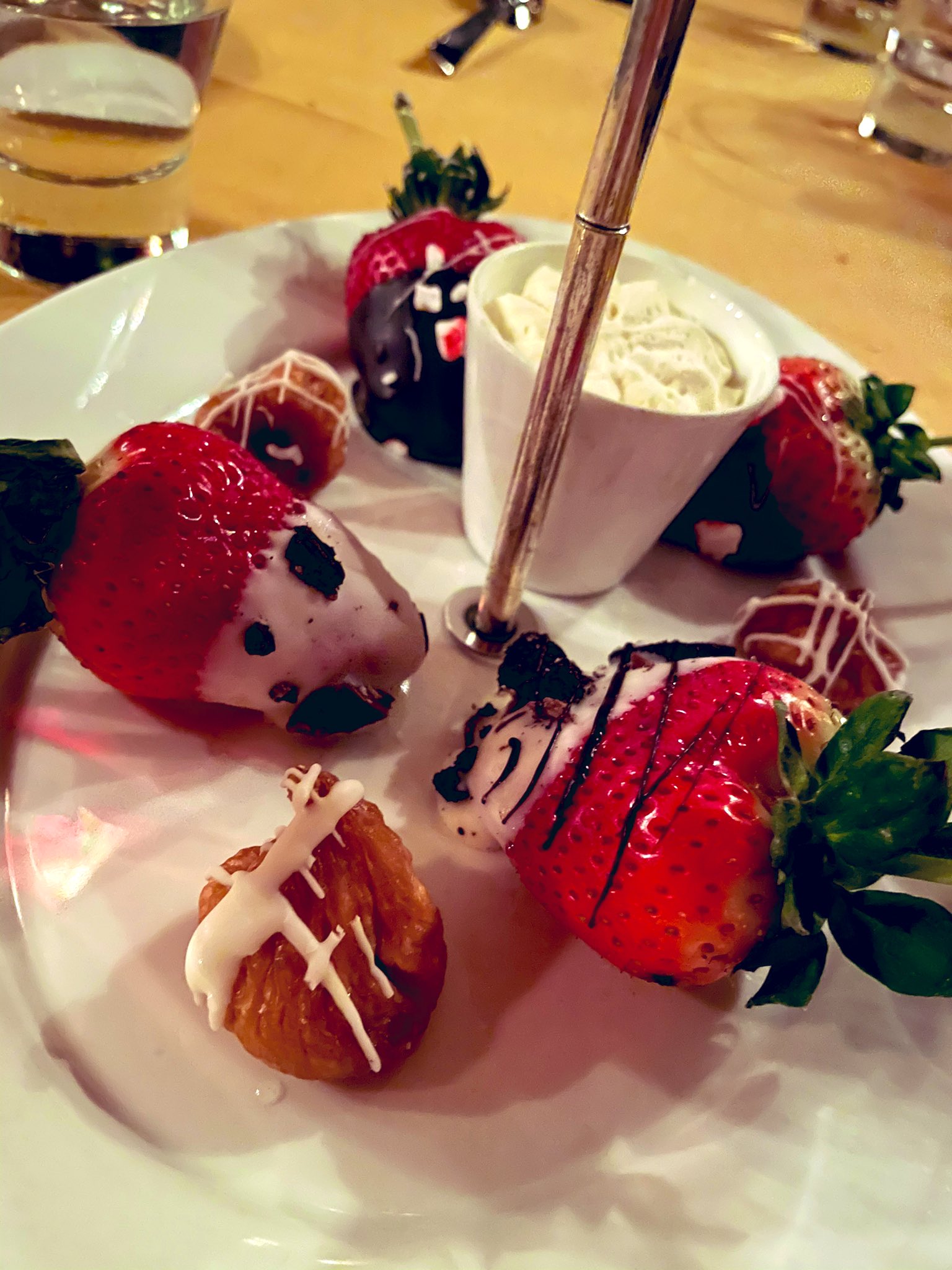