(Ed. note: This article originally appeared, in slightly different form (and with less food pictures) in Desert Companion magazine; you can access that version by clicking here.)

The Death of Taste

Joël Robuchon’s passing isn’t just sad news in itself. It signals the beginning of the end of Strip fine dining as we know it

When Joël Robuchon announced in 2004 that he was coming to the MGM Grand, Ruth Reichl, then editor of Gourmet magazine, called it the most important news in American gastronomy in the past 50 years. He was not a TV chef a la Bobby Flay and Emeril Lagasse, nor was he an old warhorse in the Paul Bocuse mold. Instead, this was a very French chef — the “Chef of the Century” (as designated by one French gastronomic journal) who had retired in 1995 while still at the top of his game — and Las Vegas was where he was going to plant the first flag in his campaign for an international comeback. He was bringing not just the fanciest of French food to town, but something far more important: credibility.

It’s hard to overstate what his arrival meant for Las Vegas’ dining reputation. Our top-down, celebrity-chef culture was starting to garner some criticism by the early 2000s; and even though our dining options had vastly improved under the (absentee) auspices of Michael Mina, Wolfgang Puck, Thomas Keller, and others, it was easy for food snobs to dismiss our restaurants as little more than branding exercises designed to appeal to the reality TV crowd. But Robuchon and his colleagues changed all that. Here was a chef’s chef, a revered master of the culinary arts bringing his technical skills and otherworldly flavors to Sin City, a place whose culinary history had more in common with Elvis impersonators that the haute cuisine of Paris.

All that changed in early 2005. Robuchon was not a household name in America, but gourmands the world over spoke of him with reverential awe. Imagine Yo-Yo Ma showing up in the land of Donnie and Marie, and you get the idea. He arrived not only with a cuisine that had wowed international gastronomes, but also with a radical concept in fine food that remains with us today. What L’Atelier de Joël Robuchon did (first in Paris in 2003 and then in Las Vegas) was to turn the very idea of gourmet dining on its head by presenting the most sophisticated of cuisines in something that looked like a sushi/tapas bar. These days, avid foodies take for granted — indeed, demand — eating finely tuned food in laid-back surroundings. Robuchon, however, did it first and did it best. “C’est une revolution!” the French food press proclaimed, and so it was. And it set the stage for the wave of chef-driven food in informal settings that was to become the signature style of restaurants everywhere for the first two decades of the 21st century.

In gastronomy, as in art, fashion and architecture, the seismic changes often happen from the top down. What is haute couture one year in Milan often shows up three years later on the clearance rack at Macy’s. Robuchon begat this revolution as a reaction to the high pressure (and crippling expense) of chasing Michelin stars. He brought forth his L’Ateliers as a new way to feature the best of French food. Unfortunately, as with many knockoffs of luxury brands, imitators have remixed his ideas into a sweeping casualization of our dining culture — without the attention to detail or chops that Robuchon and his troops brought to the table.

The past 10 years have seen a steady erosion of the many comforts that used to make eating out so delightful. Civilized noise levels, comfortable chairs, and tablecloths are becoming as obsolete as tasseled menus, and one wonders if truly fine dining and its attendant luxuries won’t soon be leaving the stage along with the ghost of Monsieur Robuchon. Our entire dining revolution began with Spago, and gained worldwide attention with the addition of luminaries such as Le Cirque and Bartolotta Ristorante di Mare. These were big-deal meal restaurants, with service and prices to match, but they announced themselves (and Las Vegas) as a food scene to be reckoned with.

No one is making such a splash these days. Bradley Ogden won the Best New Restaurant James Beard Award in 2004; it was replaced with a boring (I’m being kind) Gordon Ramsay Pub. Instead of the Tuscan elegance of Circo, we now have Lago, a restaurant with lots of small plates and all the charm of a bus station. The Strip isn’t trying to make its restaurants world-class anymore; it wants social media “likes” and Instagrammable David Chang clones. For 20 years, Las Vegas’s reputation as an upscale resort town was directly related to the quality of its restaurants. (You can gamble or get a Chanel bag anywhere these days, but where else in the world could you find dozens of superb dining options, from the greatest steaks to haute cuisine palaces, all in a couple of miles of each other?) As we head deeper into this century, it seems our hotels are all too willing to soil that reputation in their quest to dumb down Vegas into another Branson, Missouri — albeit one with drier weather and more day clubs.

The visionaries of Las Vegas recognized that Baby Boomers had money to spend on upscale food and drink — but, beyond that, they recognized great restaurants as an aspirational signifier of the finer things in life. When sitting side-by-side and screaming at each other is the new restaurant normal, it may signal a devolution from which there is no return. If Las Vegas wants to retain its stature as a dining destination for a certain level of affluent traveler, it’s going to have to recapture the spirit that brought Robuchon, José Andres, Guy Savoy and Pierre Gagnaire here, not vapid TV personalities and warmed-over noodle shops.

In the meantime, we still have the virtuosity of his two restaurants in Las Vegas. Whether L’Atelier and Joël Robuchon at the Mansion (his more classically formal dining room) will soldier on remains an open question, but his legacy will be far vaster than whether his restaurants continue to serve the food he made famous. Joël Robuchon taught us how technically precise, and almost perfect, restaurant cooking can be. And for his last act, he taught chefs and diners that elegant, visually stunning plates of food need not be accompanied by stuffiness or pretension. Ruth Reichl was right: Joël Robuchon was the biggest thing ever to happen to American gastronomy — and he was the biggest and best thing ever to happen to restaurants in Las Vegas.

The unforgettables – Some quintessentially Robuchon plates: 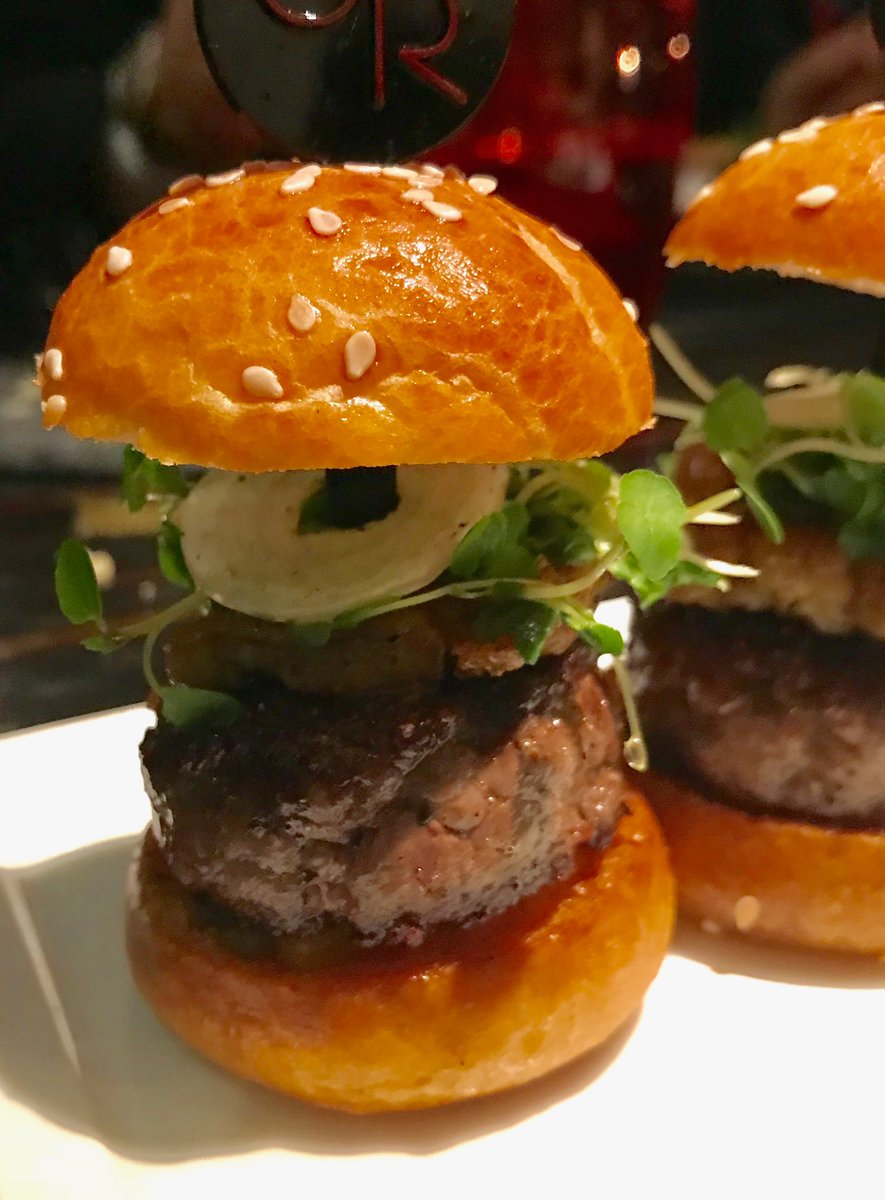 Everyone does sliders/mini-burgers these days, but you’ve never tasted one as good as this. 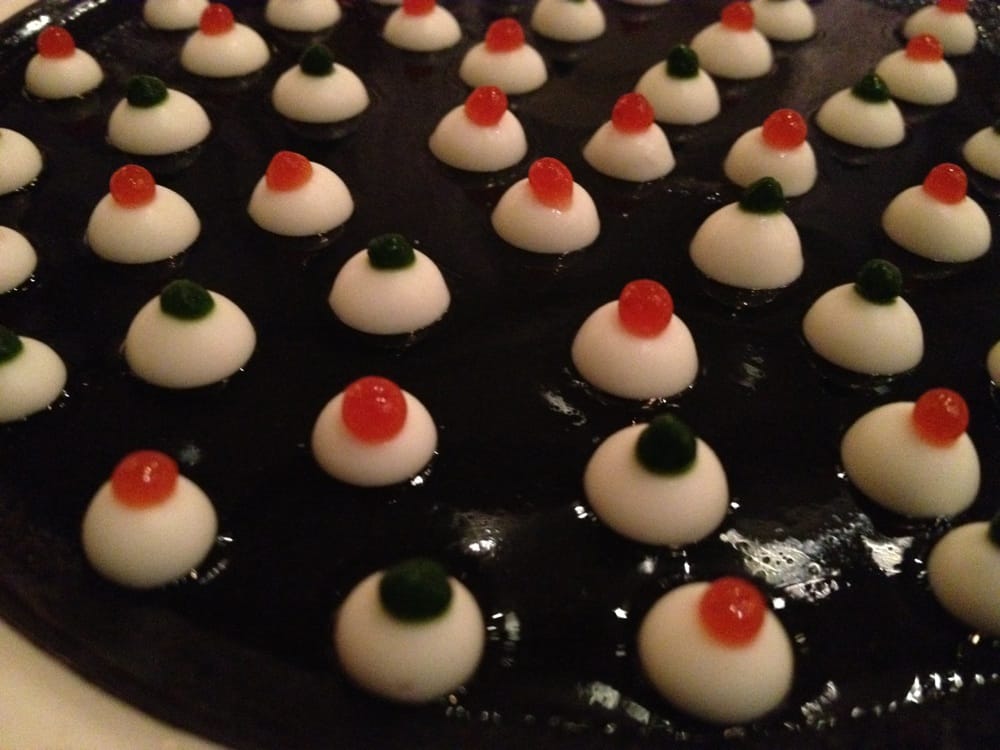 Robuchon once told me the hardest dish in the world to make was a Caprese salad. “It only has four ingredients, so there’s no place to hide.” Ever the master of simplified sleight-of-hand, he riffs on tomato, olive oil, basil and cheese by disguising the tomato as a clear liquid, and putting the world’s most perfectly formed, teeny tiny, basil-accented, mozzarella balls on top of it. 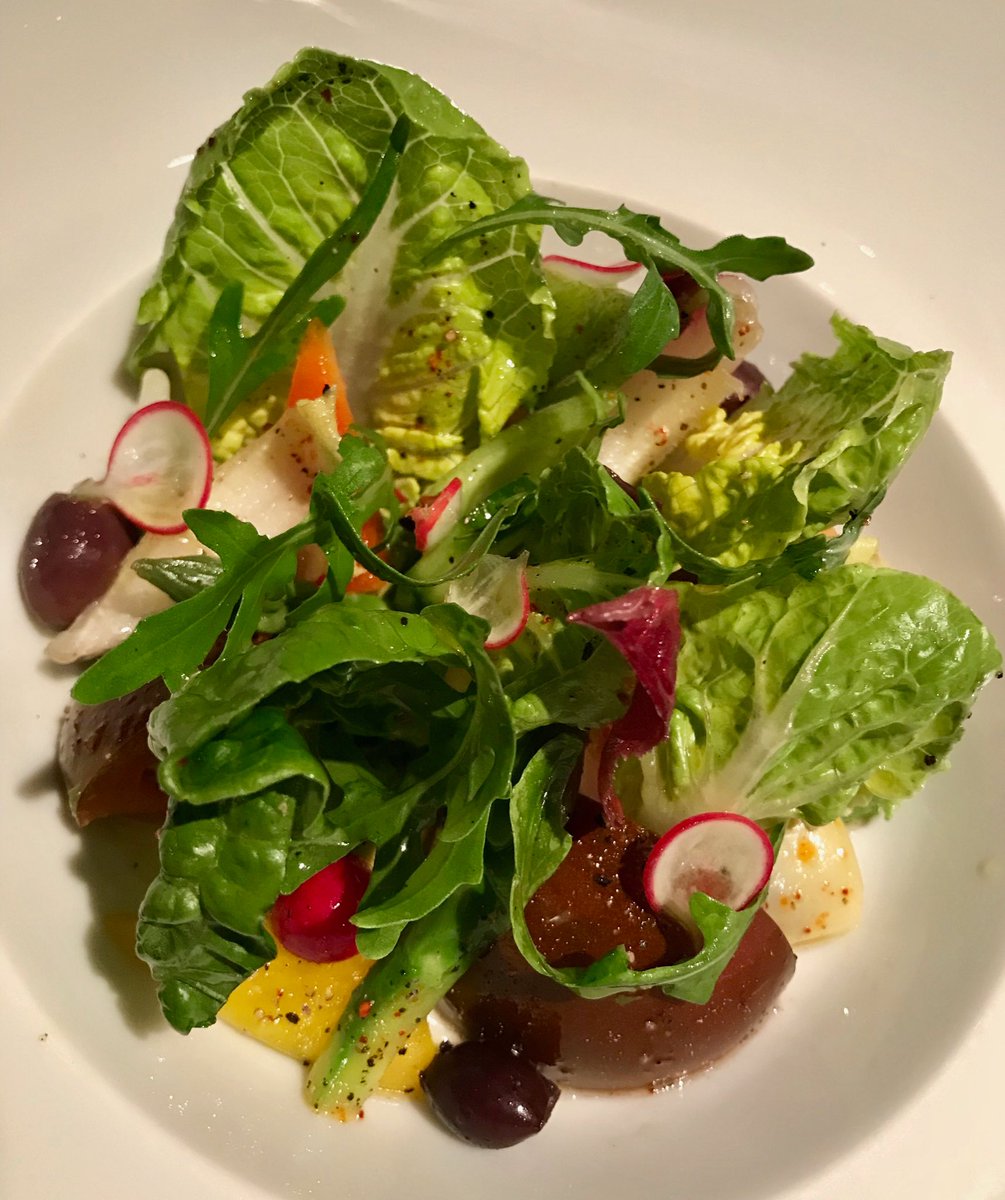 So good it could make a vegetarian out of you. 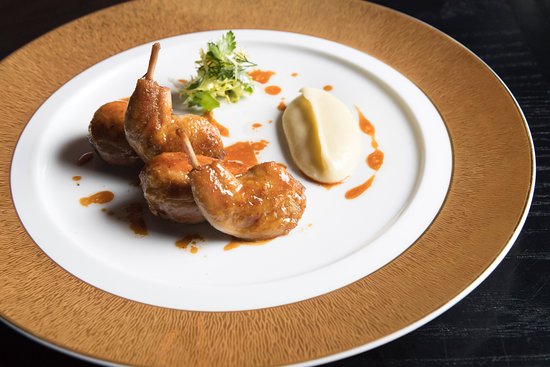 A dish that goes back to Robuchon’s glory days at Jamin (his first 3-star Michelin), the breast of quail is rolled and filled with foie gras and then given a honey-soy glaze. “His philosophy was to treat simplicity with sophistication,” is how Executive Chef Christophe De Lellis describes JR’s cuisine, and nothing says it better than this dish.

It’s hard to improve on the flavor of a dense, sweet, almost gamy langoustine, but Robuchon figured out that wrapping it in phyllo with a single basil leaf and serving it with a basil-garlic pistou was just the trick. “We were taught not to needlessly add flavors,” says L’Atelier Exec Chef Jimmy Lisnard, “but to amplify the product itself.”