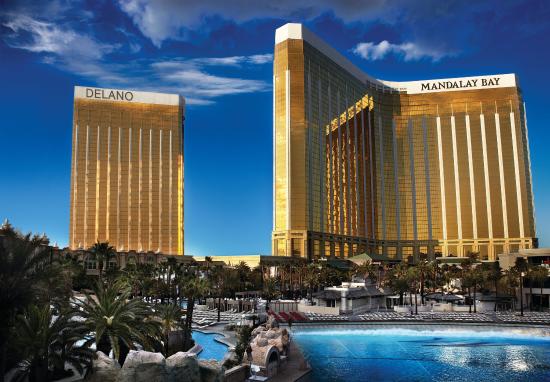 You remember Mandalay Bay, don’t you? It was once a mega-hotel on par with the Wynn, Bellagio, and Caesars Palace when it came to top-shelf, drop dead delicious food. When it opened in 1999, it boasted a murders row of chefs and restaurants that went toe to toe with the likes of Le Cirque, Picasso, Michael Mina and anything Wolfgang Puck, Emeril, or Bobby Flay could throw at you. Piero Selvaggio had a pasta shop in the mall that was second to none, Hubert Keller killed it nightly in a gorgeous room,  and Rick Moonen could sling the freshest of fish with the best of them. When Alain Ducasse crowned the top of THE Hotel with his miX Restaurant and Bar in 2004, it capped one of the most impressive lineups of chefs (absentee or otherwise) of any hotel in the country.

Then, something happened. Call it complacency, call it competition, but when Joël Robuchon, Guy Savoy and Pierre Gagnaire planted their flags here between 2005-2009, you could almost feel the wind go out of the MB sails. And when the recession of 2008 hit, something really happened. The high end customer base shrank considerably (there’s only so many aspirational gourmets out there ready to pay big bucks for fancy food), and pretty soon the entire hotel seemed to go into a downsizing funk. Charlie Palmer’s Four Season steakhouse was eclipsed by a dozen others, miX and Moonen’s high-end seafood lost their audience, and Aureole got stale. Before you could say “credit default swaps,” Fleur de Lys threw tacky “art” on the walls and started serving tacos, and the entire hotel looked like it was headed to the middle-brow mediocrity of Luxor-land.

Well, praise the lord and pass the mashed potatoes, because things have changed.  Moonen re-booted himself with his rX Boiler Room (and by bringing in the talented Sean Collins to run both it and his seafood cafe), Charlie Palmer STEAK has gotten a facelift and a menu lift (from chef Tom Griese), and the new Libertine Social blends the dynamic cooking duo of Shawn McClain and Richard Camarota with über-mixologist Tony Abou-Ganim into a zeitgeist cocktail of haute casual eating and drinking. Add to this the continuing excellence of joints that have never wavered — Border Grill and Strip Steak — and you have a hotel that has recaptured its mojo. Even that old warhorse Aureole is getting into the act, re-doing the decor and bringing in local legend Johnny Church to rejuvenate the kitchen.

I still haven’t forgiven the F&B bigwigs for what they forced Fleur de Lys to do (go from fabulous French to so-so small plates), and what Ducasse did with miX is inexcusable (it’s now an overpriced Italian restaurant that looks like a coffee shop, albeit one with the greatest view in town), but with the veteran Emmanuel Cornet now in charge of food and beverage, I’m starting to think Mandalay Bay might once again become my go-to food and booze hangout, just like it was a decade ago.

2 thoughts on “Mandalay Bay is Back, Baby!”