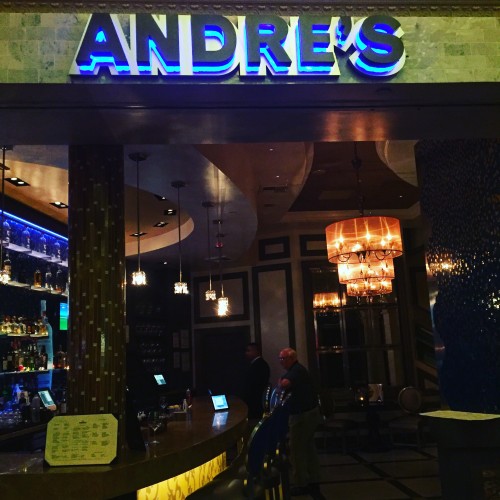 Ed. note: After eighteen years at the Monte Carlo Hotel and Casino, the last Andre’s will close its doors in early October — management having made the decision to close before the lease is up to make room for a gigantic Eataly to span the Strip side of the hotel. The good news is that Andre’s will soon resurface in a new location in the southwest part of town (in the space of a well-regarded local joint that has already relocated downtown), and that negotiations are underway to bring a casual bistro back downtown, only a stone’s throw from the original Andre’s location on Sixth Street. Below, I share some thoughts on my long and tortured relationship with the chef-owner of this culinary pioneer.

When I got the news last night that Andre’s would be serving its last Dover sole on October 5, it suddenly dawned on me that Andre Rochat and I have had a decades long, movie-of-the-week relationship straight out of a bad rom-com.

You know the kind: where a couple who each has been starved for affection meet cute, have a torrid affair, drift apart for years, miss each other terribly but won’t admit it, rediscover the flame, re-connect for what looks to be a long, steady relationship right up until they both disappoint then infuriate each other causing both to swear undying loathsome contempt for the other until one is found to have a disease that brings them back together even thought willful pride won’t let either one admit they made a mistake and  even though everyone is rooting for them to get back together and it’s only when one of them is leaving for good that both realize what they’ve been missing all along.

Because indeed, Andre and I met cute back in 1982 when he was starved for customers and I was starved for someplace good to eat in downtown Las Vegas. Someone told me that a former pastry chef had opened a real French restaurant on Sixth Street that was open for lunch, and I was so excited that I probably ate there ten times in the first six months it was open. I was still ten years away from writing about food, but it was obvious that this was the real deal and I gobbled up everything on the menu from the salad Niçoise to the the duck confit, while generally being in awe of a real wine list the likes of which had never existed before in the High Mojave Desert.

Fast forward ten years (after our six year sojourn to Connecticut and back), and there was Andre and Andre’s, still holding strong as the City of Las Vegas grappled (for over five years) with what was known at the time as the “Minami Hole.” People have forgotten that this huge open pit (where the Lloyd George Federal Courthouse now sits) was a major eyesore downtown for seemingly forever, and that it was perched right smack dab in front of Andre’s restaurant.

It was a testament to the loyal following Rochat built up at that time that he weathered the storm, and by the mid-nineties he was going greater than ever. So great, in fact, that he decided to take over a space in the then Valley Bank building and install a place called Frogeez. The great thing about Frogeez was that it was a) as French as La Marseillaise, and b) that it did a kick ass lunch featuring lots of groovy vin du pays wines at highly digestible prices. (Apparently, while we were back East, Andre abandoned lunch at his flagship, preferring to court the more lucrative dinner trade.) Frogeez was so good we raved about it in an early review for the Las Vegas Weekly (then called SCOPE), causing Rochat to send us a handwritten note stating that we were “….the only critic in town that knows anything about food.” (Then and now, the “top critic” competition wasn’t exactly fierce.)

Alas, Frogeez didn’t make it, but in 1998 Rochat expanded his brand to the Monte Carlo Hotel, and for a time he had three quality places going that flew the French flag high. In 1999 I made mention of all of this (and praised him effusively for his pioneering accomplishments) in a review I did of both his Monte Carlo and downtown joints for the then Las Vegas Life magazine. Unfortuately, I also made the mistake of stating that some of his wine markups bordered on the unconscionable, and that a couple of dishes weren’t all they were cracked up to be.

From there it’s a familiar story. He blew his top, and sent nasty missives to everyone he could about me. (I remember a single spaced letter calling me out for daring to question the perfection of his sauce.) I venture into Alizé after it opened in 2002 and Rochat gives me the old heave ho while spewing that “You know nothing about food; you say things that are wrong; get out!” in that dismissive, indubitable, inimitable, contemptuous way that only Frenchmen have.

We haven’t spoken since then, and probably never will again (he mostly lives in Thailand now), but as much as I can fault him for his wine prices (at Alizé, still outrageous), and his personality (look up “stubborn Frenchman” in the dictionary and you’ll find his picture) there’s no denying the impact he once had on our culinary scene and how much I, for one, appreciated it.

Rochat hung on downtown for another five years after kicking me out of Alizé, but by 2008 his flagship was finished — done in by a combination of bad business and a worse recession.

Through it all, Andre’s in the Monte Carlo Hotel held on, holding down the fort of fine French cooking somewhere between the haute bistro stylings of Bouchon and Bardot Brasserie and the über-expensive creations of Robuchon, Savoy and Gagnaire.

How they did it for this long is anyone’s guess. The location — almost inaccessible and invisible from like….anywhere — was always a challenge, and the Monte Carlo Hotel has been on a downward, fanny-packers-only spiral almost from the day it opened.

But god bless Rochat and his crew of inveterate Francophiles. They’ve soldiered on for eighteen years and have never wavered in putting out delicious classics tweaked just enough to keep traditionalists coming back and fussy critics happy.

When I was finally let back on the premises (of both Andre’s and Alizé) over the past year, I realized what I had been missing: torchon de foie gras with buttery brioche:

….gorgeous roasted duck, that Dover sole, escargot from heaven and profiteroles from another planet.

Tucking into any of them felt like sleeping with an old flame that you’ve reconciled with and rediscovered in middle age. The passion may not burn as bright as it once did, but you slip right back into things that you realize you were never supposed to leave. But leave it I did for over a decade, and then I came back, and learned to love it all over again, just to be told it was going to leave me for good. C’est la vie, as the French would say, but sad just the same.

Perhaps with the opening of a new neighborhood bistro, Andre (the brand if not the man) and I can learn to be “just friends.”