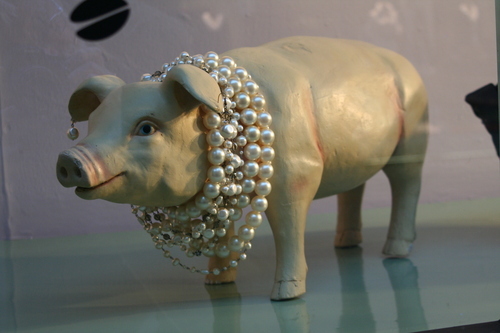 ELV note: The last day of the year is a time for reflection, and, for ELV, for getting a cold. Yes, true to form (and by “form” we mean 3 times in the last 4 years) a good ole cold virus has decided to visit us on New Year’s Eve. So, since the appetite is gone and the throat feels like sandpaper, the only thing to do is to cast more pearls of wisdom before our loyal readers. Every year we add a dozen or more aphorisms, witticisms, truisms and apothegms to our ever-expanding fount of profundity, and we now offer them as our gift and our wish for you to have a happy and prosperous New Year. And now, as Boswell might say, back to bed. Happy New Year!

Food is life itself; the rest is parsley. – Alan Richman

Comparison is the root of all unhappiness. – Cicero.

Life is about always having something to look forward to.

Your taste buds are sharpest at noon.

Wine always tastes better in the place where it is made.

Capitalism will eventually cannibalize itself.

Try everything once except incest and folk dancing.

Don’t tell me what the law is, tell me who the judge is.

Three things to avoid at all costs: dinner at a friend’s house, supermarket wine, and amateur musicians.

Santa Claus has it right: visit people once a year.

Andy Warhol got it wrong; now that everyone is famous, no one is.

When I travel, I always keep whiskey handy in case I see a snake, which I also keep handy. – W. C. Fields

Las Vegas is a city that lends a veneer of sophistication to people who otherwise have none.

The hardest thing about being LGBT is shutting up about it.

The higher you get off the ground, the worse food gets.

The more worthless something is, the more it advertises.

The more worthless an entertainment is, the more award shows it sponsors, e.g., country music.

The cruelest irony of life is once you finally figure it out, you’re too old to enjoy most of it.

There are two ways a man knows he’s middle-aged: 1) when he doesn’t want the music to start; and 2) when he sees a woman walking with her daughter and they both look good to him.

You learn more from losing than you do from winning.

Really rich people are never as smart as they think they are. What they know well is whatever made them rich. They are remarkably clueless about everything else.

People who inherit their wealth are the dumbest of all.

Self-made men are the biggest tippers.

Children of rich or famous people are boring because they can afford to be.

Chess is the greatest waste of human intelligence ever invented, next to whatever happens in an advertising agency.

Music is all about emotion; movies are about nothing but the manipulation of emotion.

Hunting is not a sport; a sport is a game the other side knows it’s playing.

Never make the mistake of thinking you’re the smartest person in the room, even when you are.

How do you give a German a sense of humor? Teach him English.

Nothing good ever happens after midnight.

The person with the least complicated argument usually wins.

The runaway nun always speaks ill of her convent.

Never eat at a place called Mom’s, play cards with a man named Doc, or sleep with a woman whose troubles are worse than your own. – Nelson Algren

The only time I enjoy myself as a lawyer is when I’m in a courtroom.

There are two important things in politics: money…and I forgot what the other one was.

It is fascinating to watch anything being made.

When tradition is compromised, variety proliferates.

Barbecue is like sex, the worst I ever had was still pretty good. It is the only food I can say that about. (2015 update: This is no longer true. I’ve had so much bad barbecue in Vegas over the past 18 months, I’m resigned to making my own from now on.)

Politics is the only profession for which there is no training.

Always judge a person by how they treat someone who can’t do anything for them.

Always judge a woman on a first date by how she treats the staff in a restaurant.

Sex is better on drugs…except when it isn’t.

Everyone eventually regrets getting a tattoo.

Acting is an emasculating way to make a living.

Women taste like oysters…and white truffles…yet get inexplicably upset when you insist on sipping Chablis whilst chowing down.

Gay men are much more fun to talk to.

I’ve never met a gay lesbian and that’s a pity.

Space freaks the fuck out of me.

Everyone wants to be noticed.

I’ve never had sex with a man, but I imagine it’s the same.

Who wants to be a leg man? I have a pair of legs.

Everyone has an ego that needs to be stroked occasionally.

If there’s two things I hate it’s racists and Mexicans.

Get a reputation as an early riser, and you can sleep til noon for the rest of your days.

People love to believe what they can’t see. – Mark Twain.

Country music contains no metaphors — which is why it’s so idiotic.

Rock and roll may be bad poetry, but at least it’s poetry.

Anyone can string words together and call it “poetry” and some schmuck will be astonished by it.

Yiddish is the most expressive language of all.

The fish is killed with its open mouth.

There’s no money in poetry, but there’s no poetry in money either. – Robert Hughes

No one over the age of eleven should make a big deal about their birthday. – Dave Barry

Both of my sons are smarter, better men than me. That’s all a father can hope for.

I wish I had played more golf with my dad.

Sometimes, you break your own heart.

It’s not the size of the ship it’s the motion of the ocean.

If I had to do it all over again, I’d advise myself to tough out the tough times, and not seek greener pastures at the drop of a hat.

At age forty, I was incapable of following the above advice.

At fifty, it made perfect sense to me.

As a writer, if you aren’t embarrassed by what you wrote a few years ago, you aren’t trying very hard.

I have this theory that 75% of men are rutting pigs and 25% of women are randy sluts. That means on any given night, both sides are plenty busy.

A critic’s job is to educate, not pander to the lowest common denominator.

Money is just like sex. If you don’t have it, you can’t think of anything else. If you do, it frees you up to think about other things. – James Baldwin

The law is a racket.

Simple food may be best, but French food is what I dream about.

My mother has always been my best friend. I’m glad one of my parents was.

You’re born alone and you die alone; it’s what you do in between with others that counts.

I’m an agnostic/atheist, but if I had to choose a religion, I’d be a Jew.

Never make the mistake of thinking a chef has a great palate, especially when they move out of their own oeuvre. (Alain Ducasse once told me he thought Cheesecake Factory made an excellent Caesar salad.)

You are no better or worse than anyone else. Neither are you as good or bad as you think you are. These are the most important lessons my parents taught me.

I never use sunscreen.

The older you get, the dumber sports become.

Fame is a drug.

Our nation’s obsession with actors and exhibitionists is its biggest flaw.

Next to its stupidity.

And its education system.

Why do people take music so seriously?

Your right to own a firearm ends where my right to safety begins.

Until we start to ridicule gun owners for their psycho-sexual fetishization of firearms, there will be no gun control.

All religions start with the cry “Help!”

Golf and sex are the only two things in life you can be terrible at and still enjoy. – Jimmy Demaret

Never bet on anything that eats.

Golf  courses are man’s only improvement on nature.

People with no vices have very few virtues. – Abraham Lincoln

All politicians are attention junkies.

Black people will laugh at anything.

I’ve never met a politician I genuinely liked because precious few of them are genuinely nice people.

A man in a hurry should slow down.

Life is a constant struggle between our good sense and our inherent selfishness and stupidity.

Fidelity in men is a matter of options.

Most men are biologically incapable of fidelity to one woman. The good news is they eventually outgrow this.

Even promiscuous women are looking for love. Not so, men.

Latins are the friendliest people on earth…and the most bat-shit crazy lovers.

Most professional athletes are assholes pretending to be nice guys.

Men are sports fans because it’s the first thing in life they ever fail at.

All junkies are the same.

The two most destructive drugs are alcohol and nicotine.

I love wine, but the older I get, the more the alcohol just gets in the way.

Drugs are great because they make you feel better RIGHT NOW.

Most stereotypes are true.

Men are better chefs and comedians than women. They also sing better.

The French are the best wine makers in the world, but sometimes Italian wine just tastes better.

Everyone and everything looked like hell in the 1970s.

The 70s were a kidney stone of a decade.

Outside of their professions, lawyers and doctors can be remarkably unsophisticated creatures.

Bad parents can make good children, but the opposite is rarely true.

All men are not created equal. We may possess certain inalienable rights, but there is nothing equal about any of us from the moment the seed is fertilized until we part this mortal vale.

If you want to see what a child will be like when they grow up, look at their parents.

If you have to lie, be brief.

The Jews get most things right…except their cooking.

Time just has a way of getting away from us.

If you have an appetite for life, stay hungry.