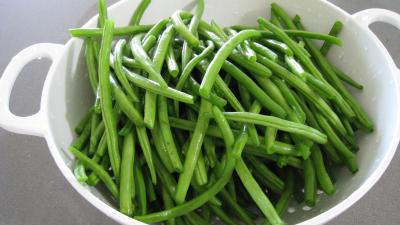 ELV note: Anyone who knows us, knows that Thanksgiving is our favorite day of the year.  It is a distinctly American holiday that, despite every retail and market effort to the contrary, has yet to be  co-opted by capitalism and bad taste. Thanksgiving is all about food, family and friends and that’s it. (We would say “football” also, but the NFL’s craven marketing — and too many crappy contests — is fast taking that element out of the equation for many.) Regardless, Thanksgiving is a time to feast and remember, and we at Eating Las Vegas always like to use the day to remind you of “The World’s Greatest String Bean Recipe.” So, here it is Thanksgiving feasters — for the 12th year in a row — our remembrance of beanie days gone by:

As a prelude to this year’s Thanksgiving, ELV’s staff thought a trip down memory lane was in order. More specifically, a return to a few commentaries he did on Nevada Public radio about his favorite holiday….including not one, not two, but THREE recipes for the world’s greatest bean dish — featured for years on News 88.9 FM KNPR-Nevada Public Radio, and now brought to the readers of Eating Las Vegas for your shared enjoyment and delectation. ELV promises you, if you make them once, your Thanksgiving table will never again be without this sweet, savory and sour treatment of these luscious legumes.

Before we get to cookin’, you might like to tune in here, where, in 1999, we explored some of Thanksgiving’s history…in a rather high-pitched and rapid fire delivery. (Our voice would improve over the years, thanks to a number of great producers at the station.)

In this commentary (and in a more modulated tone) we give a nice snapshot of where our neighborhood food scene was in late 2001.

Giving thanks was our theme in 2002, when we rattled of our favorite experiences and hallowed haunts of the previous year.

Grandma Schroader’s Sour Beans made their first appearance on the air on Nov. 27, 2003, when we wrapped the recipe around memories of Thanksgivings in the sixties.

1. Fry and crumble a pound of bacon….which is really more than you’ll need, but half of it will miraculously disappear as you complete the recipe.

4. Now this is the hard part so pay attention…Pour everything over the beans and garnish with whatever bacon hasn’t miraculously disappeared from your kitchen counter.

Looking for an appropriate toast to make tomorrow? Then listen to our history of toasts, along with a few obscure ones, from this commentary in 2004. (Our favorite: OOgy WaWa – “bon appetit” in Zulu.)

Thanksgiving 2006 was mea culpa time, as we had to sheepishly admit we had been tinkering with our family’s classic sour bean recipe.

Here is the real, actual, authentic, straight from the 50s recipe, taken down in the handwriting of Marcella Ruth Schroader Curtas (d.o.b. 8.10.24 – The Official Mother of ELV):

Fry and crumble a pound of good pepper-crusted bacon – which is more than you’ll need, but half of it will have miraculously disappeared before you use it as a garnish.

Trim and french-cut 12 oz. of fresh green beans. Cook (steam or par boil without salt) until tender. Drain and  put them in a nice serving bowl.

While the beans are steaming or simmering or microwaving, bring to a boil 1/2 cup red wine vinegar, 1/2 cup sugar, 1 teaspoon of salt and one chopped onion (chopped not too fine).

No here’s the hard part so pay attention: after the sugar/vinegar/onion mixture has come to a full boil, pour the entire mixture over the cooked green beans and garnish with as much crumbled bacon as your cardiologist allows.

Serve hot, cold or any temperature in between. These beans co-exist wonderfully with any Thanksgiving dinner, and ELV promises – if you serve them once, you’ll serve them every year.

By now, you are probably besotted and bored by legumes. So we’ll beat it from beauteous beans soon enough pilgrim, but not before we refer you to one last homage to Phaseolus vulgaris– aired on November 22, 2007 — where we paid tribute to this humble fruit, and revealed one final surprise.

For some reason, we skipped our Thanksgiving commentaries in ’08 and ‘o9 (maybe because things were so depressing in Vegas), but finished with KNPR on a high note — on November 24, 2010 – when we repeat the recipe again (Susan Stamberg-style) and reminisce about Thanksgivings in Florida, and expose my family’s claim to this Thanksgiving staple as a fraud. Yes, a fraud, a lie and a deception…a veritable prevarication foisted on the American public, if you will!

As it turns out, neither Grandma Hazel Schroader, nor our mother, nor anyone related to the Schroader, Cutsumpas or Curtas clans had anything to do with Grandma Schroader’s Sour Beans. Turns out they came from a neighbor lady (Fran Kesler) who clipped out the recipe and gave it to our mother (Ruth Curtas) sometime in the late 50s while we were living on Via Venetia Avenue in Winter Park (Florida, not Colorado).

Sad but true. But as John Wayne (or maybe it was Andy Warhol) once said: “When the legend becomes fact, print the legend.”

That’s our story and we’re sticking to it. No matter who invented them, Grandma Schroader’s Sour Beans* is a recipe destined for your Thanksgiving table. Make them today and thank us later.

* And let’s face it, Grandma Schroader’s sounds a lot more lip smacking than Floridian Fran’s. Floridian Fran’s Sour Beans sounds like the title of a geriatric comedy at a Miami Beach dinner theater.

2 thoughts on “Happy Sour Beans Thanksgiving to All!”