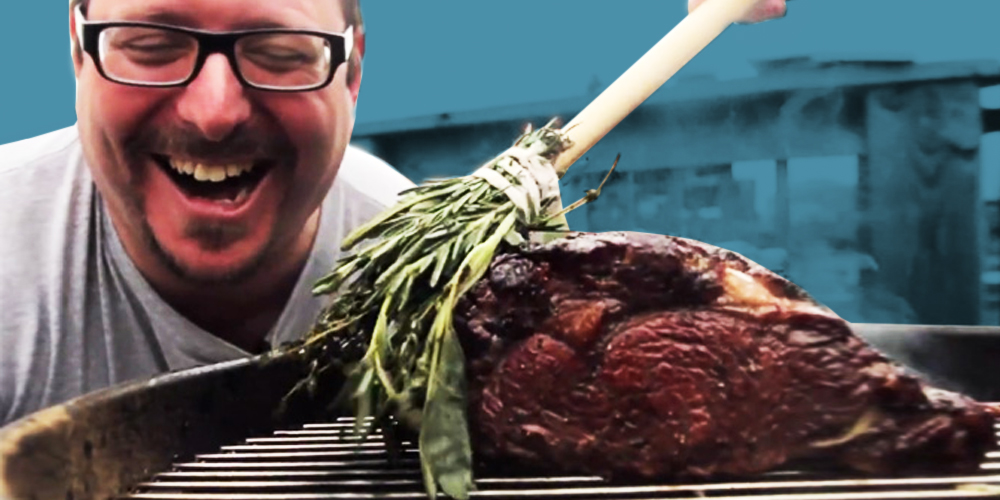 Anyone who ever shared a meal with Josh Ozersky knew three (over-sized) things were always on the menu: opinions, meat, and pitch-perfect impersonations of famous movie scenes. One night at Botero, a couple of years ago, he practically recited the entire screenplay of Godfather II to an audience of one (me) without missing a beat, a bite or a sip.

For a guy with a beef fixation, Josh was a big ham. Unabashedly so, and it made him all the more charming in a mad scientist/crazy Jew/food nerd/fan boy sort of way.

He could be prickly and overbearing (hey, it takes one to know one!), but he always did it with a smile, and those opinions, be they about dry-aged beef (loved it), anything but American cheese on a hamburger (hated it), and tweezer food (tolerated it), were as fun to argue about as they were to read. And he knew his shit, and could turn a phrase with the best of them.

You might say Josh Ozersky was a man with major chops — in his head, on his plate, and at his fingertips — and he was fascinating to meat. But that would be awfully punny — something else the Josh-ster was good at.

He was a big man and well overweight, but not obese. Like most of us in the food writing biz, he openly worried about his size, but never could quite devote himself to the devilish deal a slightly healthier lifestyle would require. Instead, he attacked life, consumed life, inhaled life with all the Falstaff-ian gusto he could muster. “Too much is not enough” was his mantra, but it was also a bit of a schtick.  The man knew his forks, and was just as comfortable sussing out a cuisine classique or cucina tradizionale recipe as he was opining on a Flinstone-ian cut of prime rib.

Josh was more than just a glutton. His confrontational, witty, throwaway writing style belied a man who was serious about his subject. He was a bit of an obnoxious upstart as well, wanting us boomers to step aside so Gen-X can finally take its seat at the grownup table. But that’s to be expected of someone as talented and outsized as he was.

Josh died Monday night in Chicago. In a hotel room. Probably after a late late night of doing who knows what. (Karaoke was mentioned in one of the obits, and if I was a Chicago cop, it would be suspect #1. Plus, “Ozersky killed by Karaoke” has a certain ring to it, n’est ce pas?)  The preliminary autopsy was inconclusive, but I hope it was nothing scandalous. On second thought, if it is scandalous, Josh would be the first to apologize and then laugh at himself.

But it wouldn’t be just a laugh. It would be a guffaw, a bellow, the Ozersky roar.

But that roar has been silenced, and the food writing world is a quieter and dimmer place today because of it.

He was a character, as my dad would say, and a helluva dining companion. I will miss him a lot.