ELV note: Between its tin-pot nationalism, greedy, billionaire owners, corrupt colleges and players (who are either absolute assholes or brain-damaged morons) it’s getting easier and easier to loathe everything about football these days. Below is a primer for those who are either unaware of its idiocies, or who turn a blind eye to the stupefying witlessness of the game.

THE HATERS GUIDE TO FOOTBALL

Most professional athletes are assholes pretending to be nice guys. – Mike Lupica

The name “football” denotes a game played primarily with the feet. Have you ever seen a football game? Feet are about 3% of the action. They are used primarily to propel the participants either quickly away from or into each other, and to occasionally kick the damn ball in what are the most boring plays in all of sports — after the intentional walk and whatever goes on in a curling match.

Foot ball is soccer and vice versa. Why is this never mentioned during telecasts? Whatever they’re doing on the playing fields of America should be called something like: Battling Over an Ovoid Sphere by Clutching, Kicking or Throwing It . The most exciting parts (97% actually) of which are done only with the hands.  But “handball” sounds like something English poofters (and pasty-faced) Ivy Leaguers play —  and those giant manly men of the NFL would rather eat tofu than be associated, even tangentially, with such things. So instead, they co-opted a name which applies to skinny-dicked, European Nancy-boys with all of the testosterone of a Somalian supermodel. It was a Hobson’s Choice to be sure. But America picked the wrong one. As usual.

Think about it for a minute. Who in the hell is dumb enough to play this game? Well, think of yourself as a tween or an early teen who is bigger, faster or just plain meaner than your classmates. You actually think a sport built around running into other human beings and trying to knock them down sounds like fun. It sounds like fun because you’re good at it. (And you are good at it because you’re bigger, faster and meaner than they are.) So some knuckle-dragging coach — who was himself a big, fast or mean teen — spots you and convinces you and your barely literate family that you NEED to be on the football team! You need to be on the team so that coach (and the legions of idiots who cheered him on) can continue to re-capture and wallow in the glories of their lost youth. It’s an endless, self-perpetuating cycle. And it’s pretty friggin’ pathetic if you think about it.

Where to begin? Is there a dumber spectacle on earth than watching 5 ex-jocks try to say something interesting?  And “try” is the operative word. Because they never do. Ask yourself: When is the last time you heard ANYTHING during the pre-game shows that you didn’t already know? Most of the “banter” is confined to saying to a dozen versions of “they have to establish a running game” or “protect their quarterback.”

The weird thing is, football (American football) is actually quite a complicated game. But you’d never know it from these “insiders.”  The game itself involves 22 grown men of generally athletic demeanor hurling themselves at each other at breakneck speeds. There’s strategy, choreography, grace, agility and timing pitted against brute strength and speed. (That’s why the game is so compelling for so many.)

But you’ve never know it from hearing Dan, Howie, Terry, Sleepy, Grumpy and Dopey discuss the upcoming game. All they blather on about are endless variations of “get the running game going” and “protect Tom Brady.” Dear Football Night in America (the DUMBEST name for a show since “My Mother the Car”): I KNOW the way to beat Drew Brees is to tackle or harass him before he has a chance to throw. A 5 year old knows that. TELL ME HOW THAT’S DONE! There’s no discussion about why some starting tackle might be unable to handle Elvis Dumervil’s “swim” move, or what linebacker corps is better known for chasing pussy than Peyton Manning. TELL ME SOMETHING I DON’T KNOW DAMMIT! Or go back to running bad restaurants.

The point is, most of them don’t even try…or are aware of the mind-numbing stupidity of what they are being asked to do…or still think of the game as one group of big guys trying to push the other group around. Who knows, maybe that’s all it is.

The days are long gone when football coaches were articulate, nattily-dressed roll models, helping their charges matriculate the ball down the field. Today they dress like street urchins, and have all the personality of a Russian bureaucrat. Every fan on earth knows what a 4-3 defense is. What we want to know is why you called a Brown Right Over Flip Zac 73 Chicago Farrow X Curl from your own 13-yard line when you were down by two touchdowns in the second half? 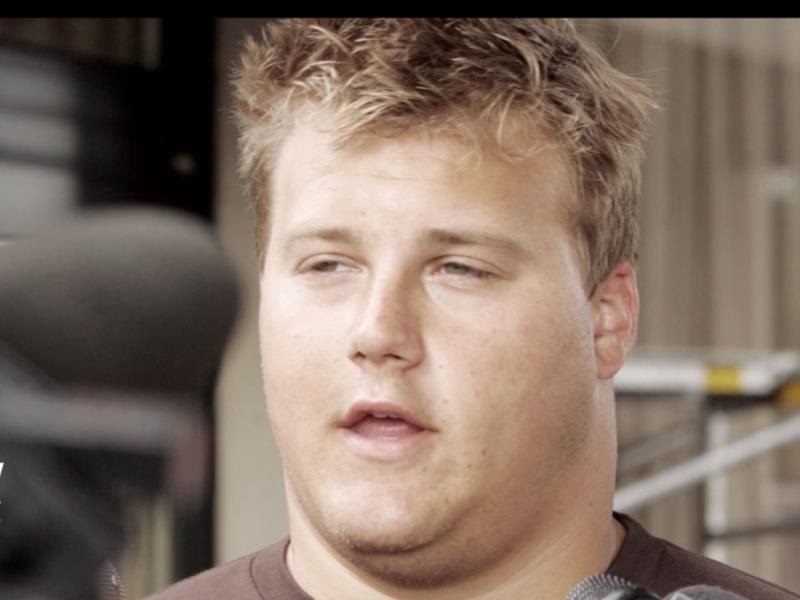 Have you ever met a football player? Or tried to talk to one? Most of them are just big, dumb oafs. Except for the skinny fast guys, who are usually skinny, stupid oafs. Yours truly attended a rather academically-inclined university (Vanderbilt) with a rather sorry football team (average record for his four years there: 3-7) that, despite giving lip-service to all that student-athlete bullshit, gave full scholarships to scores of players who, as far as we could determine, did nothing for four years but hang out together and bully the rest of the student body. Lord only knows what it’s like at a football factory. Lucky for the ‘Dores back then, they had one of their own there — the jock-sniffing “journalist” Skip Bayless (yes, he was a classmate) —  to constantly tell the rest of us what heroes they were.

And yes, I know there are plenty of good–natured, intelligent guys who play the game at a very high level, but most of them are named Alex Smith, Steve Young or Calvin Johnson.

Football is a very violent game. Only boxing does more damage to the human body. But boxing doesn’t have billionaire owners who are making billions off it. And boxers get hard and fast lessons in when it’s time to hang up the gloves. Football players are purchased like chattel, used like cattle, and sent to slaughter when their usefulness is up. They don’t mind this when they’re young because they are young, dumb and being offered lots of money to be treated like meat on the hoof. Plus, they’re getting lots of pussy precisely because they’re valuable as an entertainment resource — that entertainment being getting their brains bashed in for the benefit of the plantatio…er…uh…I mean team owners.

Rather than give up all that revenue from watching their slav…er….uh….I mean players perform to the delight of fans the world over, the owners have decided to make a game built upon physical mayhem into a “safe” sport. Boxing would be a safe sport too if they wore 40 ounce gloves and football helmets, but no one would watch. NASCAR has made it’s product safer for the drivers over the years, and it’s facing declining numbers as a result. But no one gives up access to billions in revenue without and fight (or changing something that was vicious and destructive into something that’s housewife-friendly, so the days of vicious hits like this are over. Soon enough, players will start looking like the Great Gazoo and the inevitable decline of the sport will begin.

Back when I was a kid hanging on every Johnny Unitas spiral, I used to think the Texas Drum and Bugle Corps at Cowboys’ games was the sorriest excuse for entertainment in the history of the world. What’s replaced them in the last forty years is an endless parade of self-congratulatory “Ring of Honor” shows, aging rocker spectacles and more “analysis” from beefcake-y ex-players, none of which rises above the level of “Coach, it looks like they’re gonna have to protect their QB better if they’re going to overcome this 10 point deficit.” “You’re so right, Deon. That, and they better get their running game going!”

I say: BRING BACK THE DRUM AND BUGLE CORPS!

Women of the world: Why are you rooting for these guys? No one should paint everyone with the same brush, but the dis-proportionality of football player violence against women is well documented. I love how all the studies of criminal behavior of  “athletes” use that term instead of “football player” when everyone knows it’s the football team that goes around terrorizing the student body. Anyone who goes to a real university knows there are jock dorms and jock whores and every so often (all too often) things get out of hand when football players are involved. (When’s the last time you heard of  the swimming team raping someone?) I had plenty of drunken sex in college too, but it never occurred to me to ask three or four of my friends to jump in.

Can we all agree that the homo-erotic nature of football is second only to UFC/MMA fighting (and Broadway musicals) in its disturbing gay-ness? I mean,  grown men running  around in tight pants, chest-bumping, patting each other’s fannies and showering together is enough to give Nathan Lane a chubby. The fact that so many football players are so homophobic speaks volumes about how secretly gay the whole enterprise is. “Don’t let that gay teammate in the shower with me…because he might….start….looking at my schlong….and…I….might…..ACTUALLY ENJOY IT.” Fess up you tinkerbelles. You hate gays because you’re afraid of them. You’re afraid of them because you’re afraid they might make you think about your sexuality. Sexually secure people don’t go around gang raping women. Sexually insecure men do it to prove something to themselves. And the something they have to prove to is that they’re not gay. Which they are.

On second thought, if the NFL would come out of the closet, it would be a good thing for all concerned: less off-the-field violence, no more hypocrisy, more colorful uniforms and better….

Wouldn’t it be just great to watch a bunch of gay football players dancing around after a good play? I mean, some celebrations these days are beyond lame. What they need is a good choreographer. What they need is something LIKE THIS after every touchdown. Sure the games would last longer but you’d be reaching a whole new demographic and there’d be dozens of budding Martha Graham’s out there applying for one of the 400 cush jobs at an NFL team headquarters. Someone should mention this to Roger “Waterboy” Goodell.

If homophobia, sexual violence, brain damage and bad dancing aren’t enough to make you hate the NFL, there’s always Papa John. This small-minded prick of a billionaire practically owns the NFL network, so you get to see his smarmy countenance about a thousand times a day every Sunday during football season. Along with Peyton “I Need the Money” Manning, he bombards you with adds for his shitty pizza (the only way to sell the stuff), all day (week) long, and his unctuous visage — bred on the backs of countless minimum wage workers — is always there, pretending to care about something other than the almighty buck. In that sense he’s the perfect fit for the NFL. Like all team owners, “he was born on third base and thinks he hit a triple.” Also like them, he loves to trumpet his charitable contributions while complaining that Obamacare is going to add 14¢ to the cost of his pizzas — an astronomical sum that neither he nor his shareholders would ever THINK of absorbing for the common good. You’re a greedy asshole, John Schnatter, and you know it. I hope some NFL player pisses on your pizza. After they establish a running game.

3 thoughts on “The Hater’s Guide to Football”