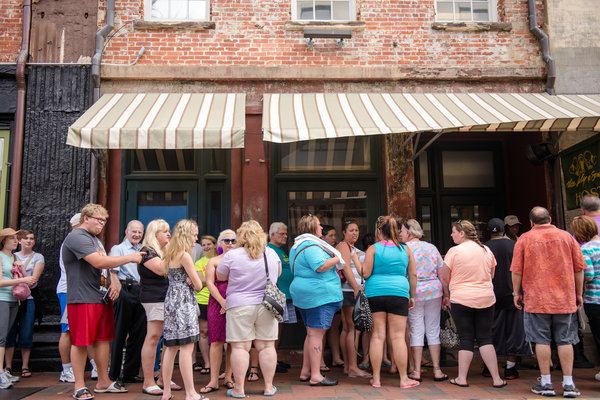 This is the picture posted in the New York Times today about Paula Deen supporters lining up to support her and her restaurant in Savannah, Georgia.

We at ELV hate to get in the middle of racially sensitive issues, but there are dozens of reasons Paula Deen should lose her job at the Food Network, but being a late-middle-aged, racially-insensitive, inarticulate Southern white woman ain’t one of them.*

She should lose her job at the Food Network because her appeal is to precisely the sort of fat, stupid, redneck, unhealthy, southern-fried idiots who need a gastronomic horsewhipping — not another fat, stupid, ginned-up media personality to spur them on to an early grave.

Describing her fans isn’t necessary because this picture does it for you.

Speaking of horsewhipping, the Food Network should be flayed because they allowed the confluence of these two forces to occur….and merrily profited from it.

* Who the f*ck did the Food Network think they were getting when they hired this overage, bleached-out, untalented hick anyway? Martin Luther King?

** Although a case can also be made that she’s either a bigot, or racially bone-headed enough not to deserve a franchise on a cable network.