Despite my terrific pun in the title, this is sad sad news for lovers of was was basically the Earth 2 version of Le Cirque.  In my eyes, it could have been the same restaurant with a big “I Love Lucy” line painted down the middle separating the French from the Italian, with a little Swiss host stand in the middle.

The story officially broke by our very own lovechild of Walter Cronkite and and Gene Shalit, in perhaps the most zeitgeist-y way you can, via Facebook Status Update.  While the ability so spur a veritable whirlwind of flying rumors is enviable, I can confirm with John that it is the Lord’s truth:  We’re losing a good one.  The reasoning, still quite murky.  The murk may go deep, even to the thick black oil that pumps through a casino exec’s cold, unbeating heart.

Because I am not one to save my mourning until the last minute, and because I have always felt Circo to be one of the most woefully under-appreciated of the fine dining sect, I took in some of the new things to be had.  I’ll do it in few words, because we’re not all H.L Mencken over here.  Consider it Exhibit A through C on why you should make up the rest of your lifetime’s worth of Circo in the next year.

Their octopus salad has the hipster-cred of being done before everyone and their danged knuckle tattoos started tossing whatever cephalopod they could onto the grill.  After what  must be a downright Swedish tenderizing, these little tentacles are about as tender as a king crab leg and go perfectly with a simple pancetta and garbanzo salad and topped with shaved “bottarga”, the cured whole caviar-sac of a Grey Mullet. 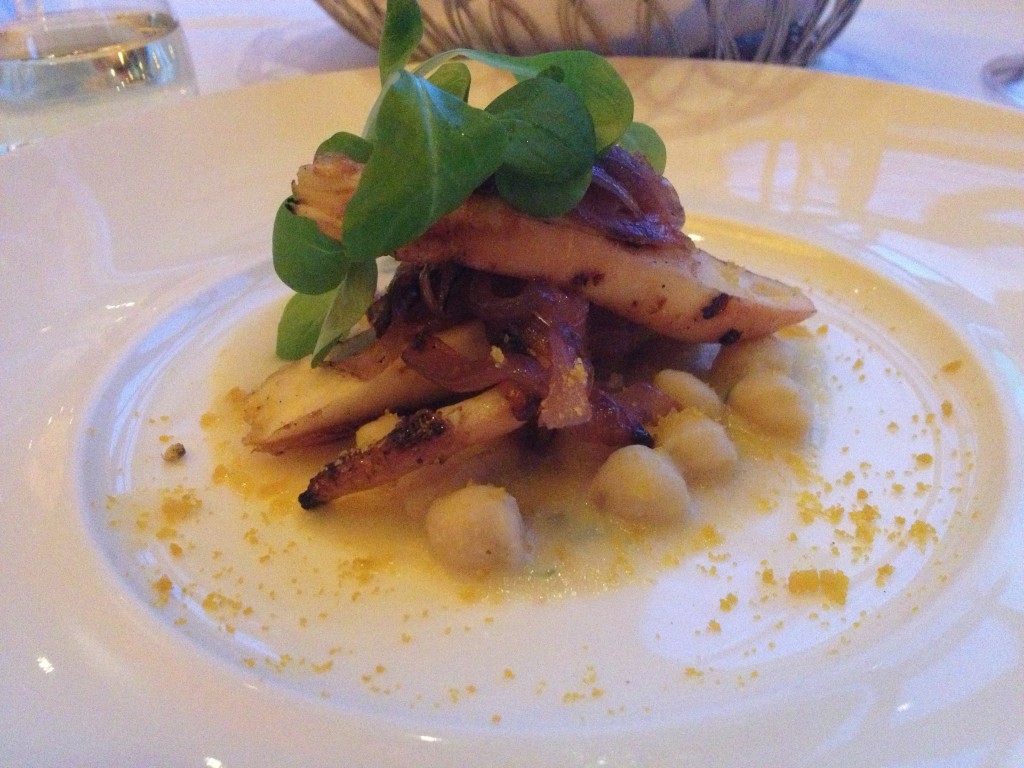 Now you just KNOW I don’t like the term “comfort food”.  It’s an odd idea, like food is supposed to make me uncomfortable unless it’s some fried junk crusted in a breakfast cereal.  The “Salmone e Caviale” however, fits the bill of being very physically gratifying as well as mentally stimulating.  The smoked salmon and marscapone cream makes a kind of “carbonara” experience, while the paddlefish caviar stands out with bursts of that delicious salty goodness. 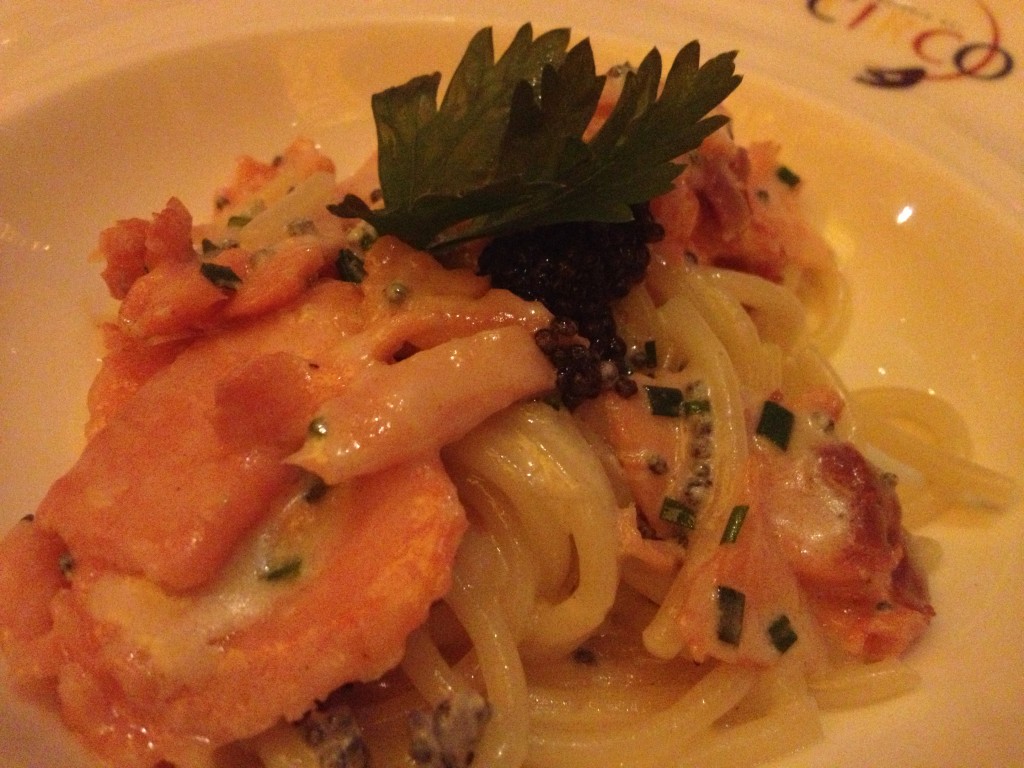 Submitted for your approval like Rod friggin Serling was your waiter, a citrus cured, smoked swordfish carpaccio.  With technical bravado in removing the less desirable qualities of the massive fish and complimenting the meaty flesh, it is served with a stunning and complexly layered bite of shaved fennel, watermelon radish, vodka cream, and caviar dressing.  Swordfish has always come off as sort of a showy, pushy thing people grill up as steaks, but Chef Micheal Vitangeli dresses up this cockney street urchin into a real Pygmalion. 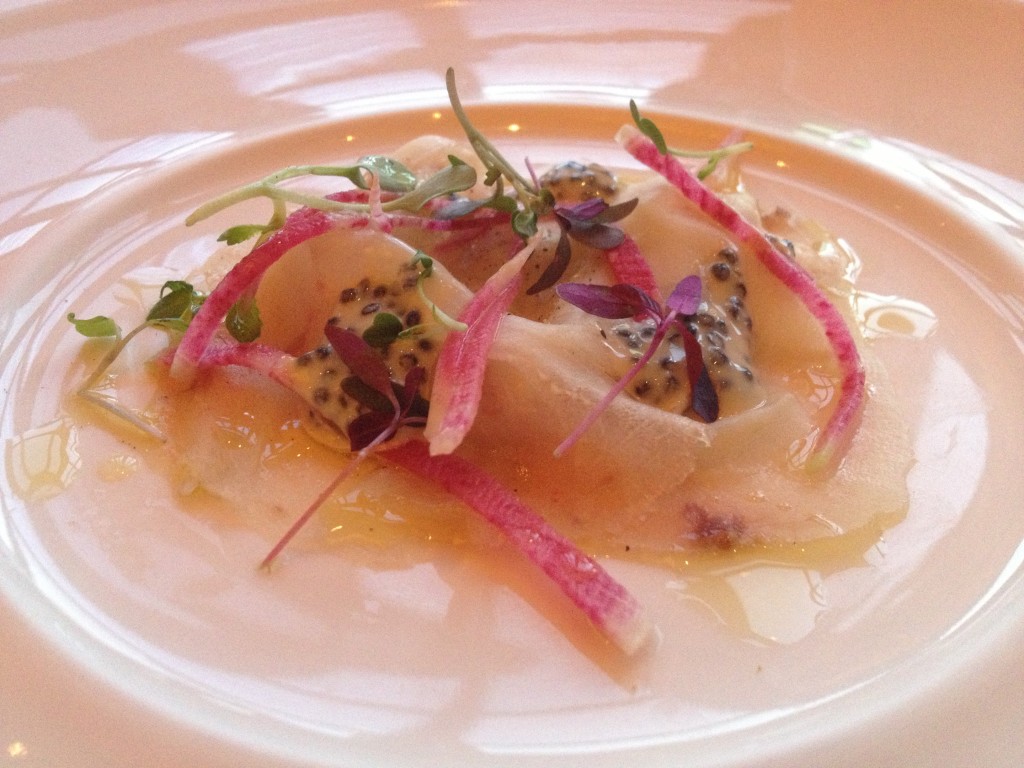 Chef Michael has never disappointed as an Executive Chef, and clearly hasn’t disappointed in any position since working his way from prep.  Did you note a theme up there?  This guy has more chops in his aquatic fare than some entire seafood-centric restaurants have in their entire menu, and he gets can drop such a problem ingredient like caviar into it like it comes naturally!  He gets a Blingee.

If we’re seeing this caliber of food close a restaurant, burger concepts being foisted upon us in place of possibly game-changing charcuterie places, I only wonder what the future will bring…

3 thoughts on “CIRCO to Close In 1 year: Don’t Cry for Me, Semolina”