There’s nothing like a long, oyster-fueled lunch. Especially when you’re salivating over shigokus and kumamotos.

For the uninitiated, shigoku (“ultimate” in Japanese) oysters are the brainchild of Taylor Shellfish farms. They grow in bags attached to lines in Willapa Bay, Washington area — the point of which is to tumble the developing shellfish, as the tides go in and out, so the edges of the developing oyster shell chip off, forcing it to deepen and the muscle to grown thick and fat. Shigokus are relatively new, first coming on the market in ‘o9, and have a flavor described as “light, clean, and cucumber-like.” 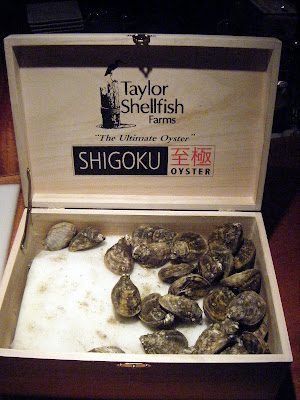 That pretty much fits the ones we had at Comme Ça the other day, but to that description we would add: briny and fishier tasting than the creamy kumamotos we usually order. Both are ultimate expressions of the west coast oyster, but we always find ourselves drawn to the creamy, nuttiness of the kumos.

Interestingly, as noted by Christopher Hall in his article on kumos (named after the prefecture in Japan where these modest-sized flavor monsters began):

“Only five species, each with distinct flavors, are commonly found in raw bars – Pacific (Crassostrea gigas), Kumamoto (Crassostrea sikamea), Olympia (Ostrea conchaphila or lurida), Eastern (Ostrea virginica) and European Flat (Ostrea edulis). Any other terms usually refer to where they were harvested.”

As ELV has noted many times, the varying tastes come from the water they grow in, as oysters are known to filter up to eight gallons an hour through their small shells in their quest to feed and grow.  So an erster that might taste more seafood-y one time, might be more copper-y and mineral-y the next. Such are the joys of slurping these salacious psalms to salinity that every shell is surprising. But you can always count on good ole kumos and these shigoku whippersnappers to be smaller, deeper, rounder and rich with flavor.

Comme Ça might is now competing with Bouchon for Vegas’ best bivalves, and once you’ve polished of a dozen of so Casseotrea gigas, we at ELV are happy to announce that you can tuck into the cassoulet without fear of offense. Everyone from Comme Ça Chef Brian Howard to Slapsie Maxie has now weighed in on what makes a proper one, and whatever flaws were present a month ago have been eradicated. Our guess is that the chefs here simply remembered  their culinary training/cookbooks and spent a few minutes brushing up and re-discovering what makes this dish a classic. Howard and Executive Chef Sheridan Su give their new, improved cassoulet a bit of an update by incorporating the bread crumbs throughout the cooked beans and spreading his duck confit across the top (probably in a nod to efficiency, but to ELV’s thinking, counterproductive), but other than that, his version now does this Southwestern French standard proud.

For dessert? Why, the apple tarte of course…just because it’s so damn good.

ELV’s lunch for two came to $98 and included  several glasses of wine.

In The Cosmopolitan Hotel and Casino

3 thoughts on “Shigokus, Kumamotos and (another) Cassoulet at COMME CA”