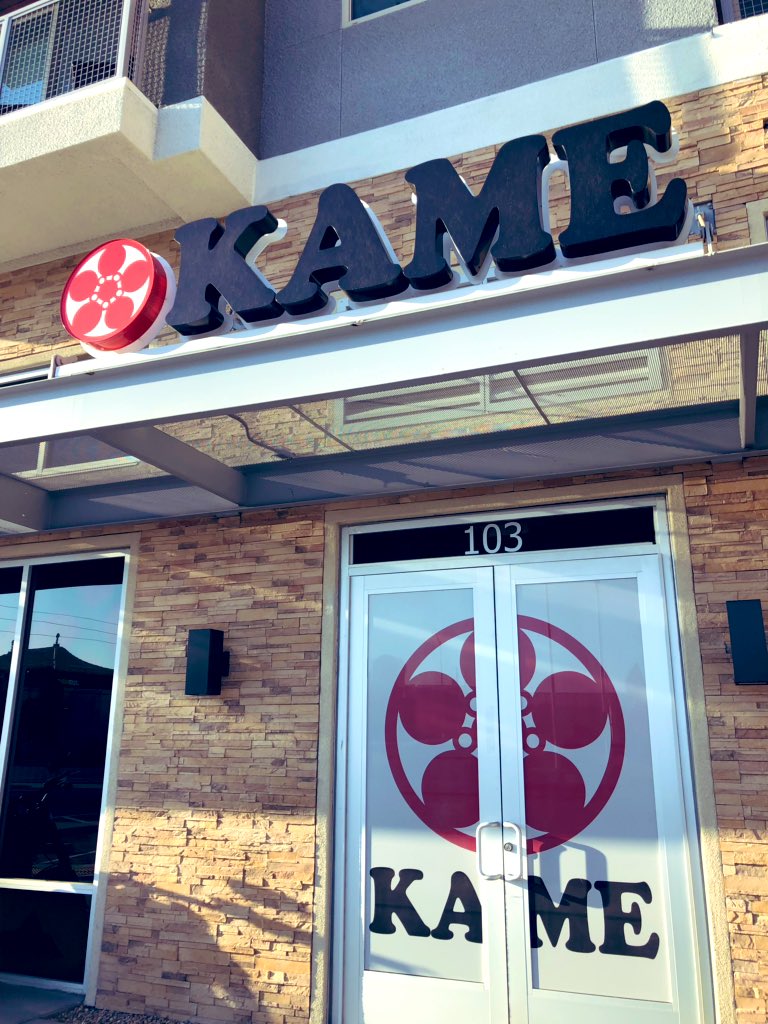 There are two cuisines we crave after one of our forays to France: Mexican and sushi. So it’s no coincidence we’ve been stuffing our pie hole with tacos and raw fish for the last week.

Good tacos are easier to find (especially downtown), but when it comes to Japanese, the pickings are slimmer. We’re always on the prowl for a place to add to our rotation. (Keep in mind we’re super-picky about the quality of sushi/sashimi we eat, as you should be. If you’re one of those AYCE bargain hunters, stop reading right now, and go check yourself for tapeworms.) 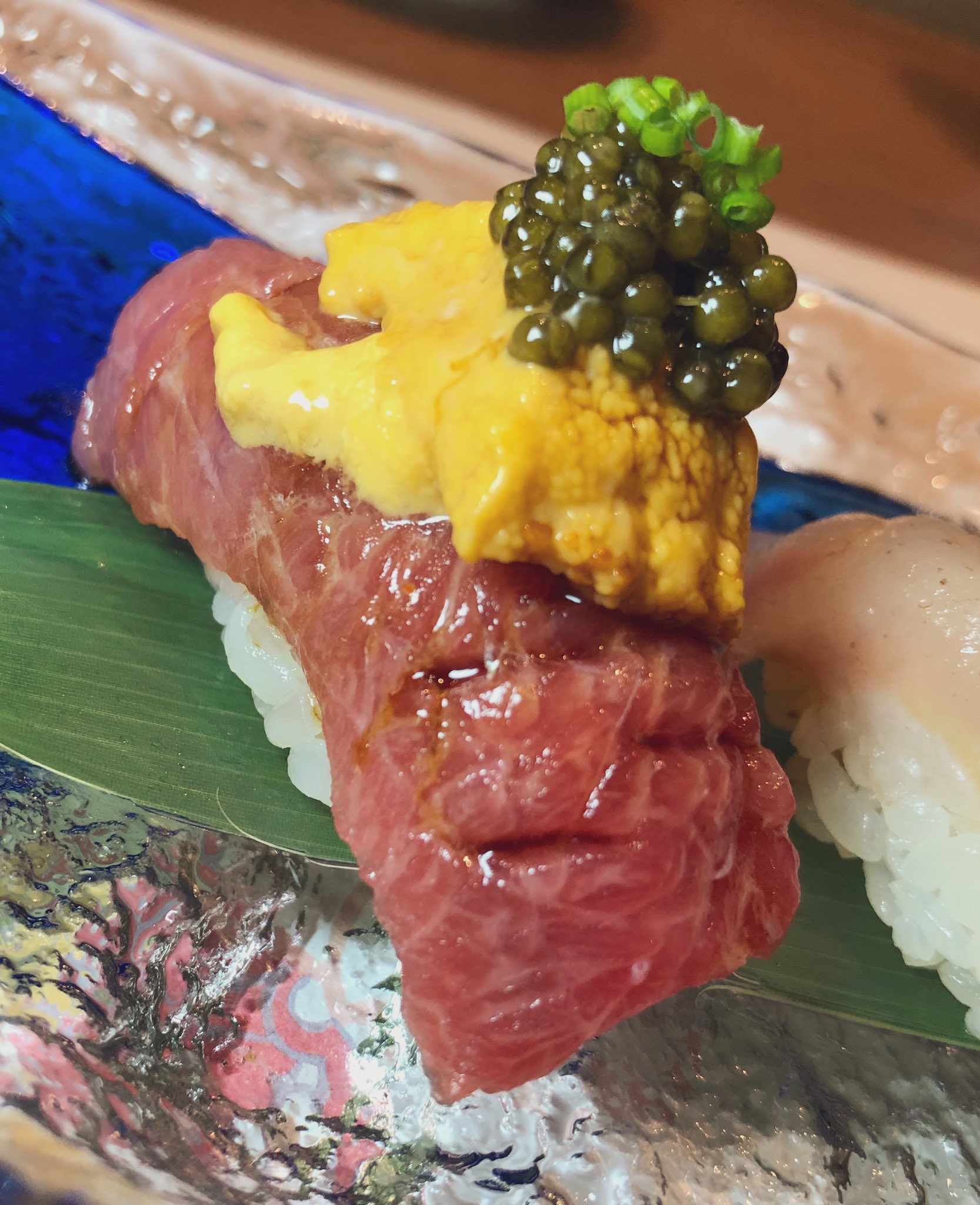 So imagine our delight when  Sushi Kame (officially called Sushi Kame Omakase & Kaiseki) opened a few months ago at a location that’s not way up near Summerlin (its old home where great food is as rare as good taste).

The new Kame is right on the cusp of Chinatown, on the ground floor of a new condo complex near Valley View. And since it’s now in a neighborhood we like rather than loathe, we stopped in for a few exploratory bites.

What we found was impressive, accessible, and eye-popping — a welcome addition to the Japanese offerings along this increasingly crowded avenue, especially when the seats at Yui and Kabuto are full. 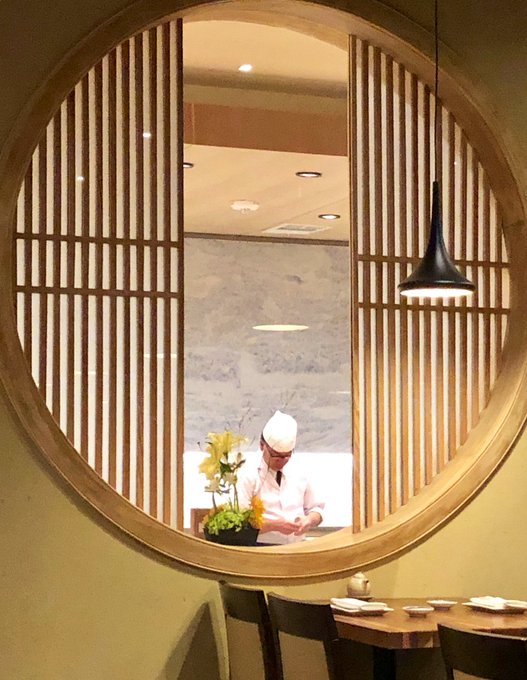 This Kame is quite an operation. A hostess stand greets you right inside the door, a large, well-stocked bar hugs the left side of the space, while an even larger sushi bar beckons ahead. Plenty of tables line the bifurcated room, and to the far right (behind a dramatic window) lies the kaiseki room (above), where reservation-only omakase meals (starting at $200/pp) are served.

We’re not ready to take that plunge (the size of my restaurant bills from Paris has the Food Gal® contemplating some sort of 12-step gastronomy withdrawal program for me), but what we found at the sushi bar when we let the chefs strut their stuff was most impressive.

Just say omakase, and what you get for $100/pp will blow right past 95% of the neighborhood joints in town. 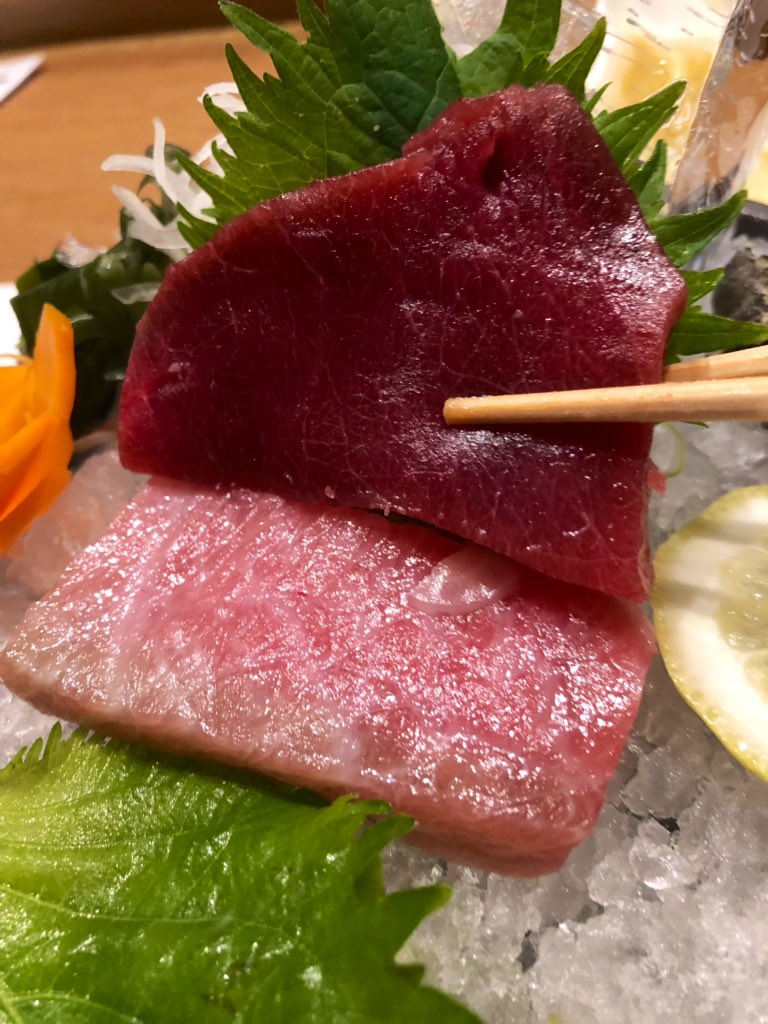 Sushi is as much about the rice as it is about the fish, and this was the real deal — soft-yet-firm, perfumed, kernels (possessing both a whiff of vinegar and umami). so perfectly cooked you can count them in your mouth.

I’m not ready to pronounce the knife work the equal of its two rivals, but having a quality alternative to these edomae sushi icons, a mile closer to the Strip (and our house), is a nice problem to have. 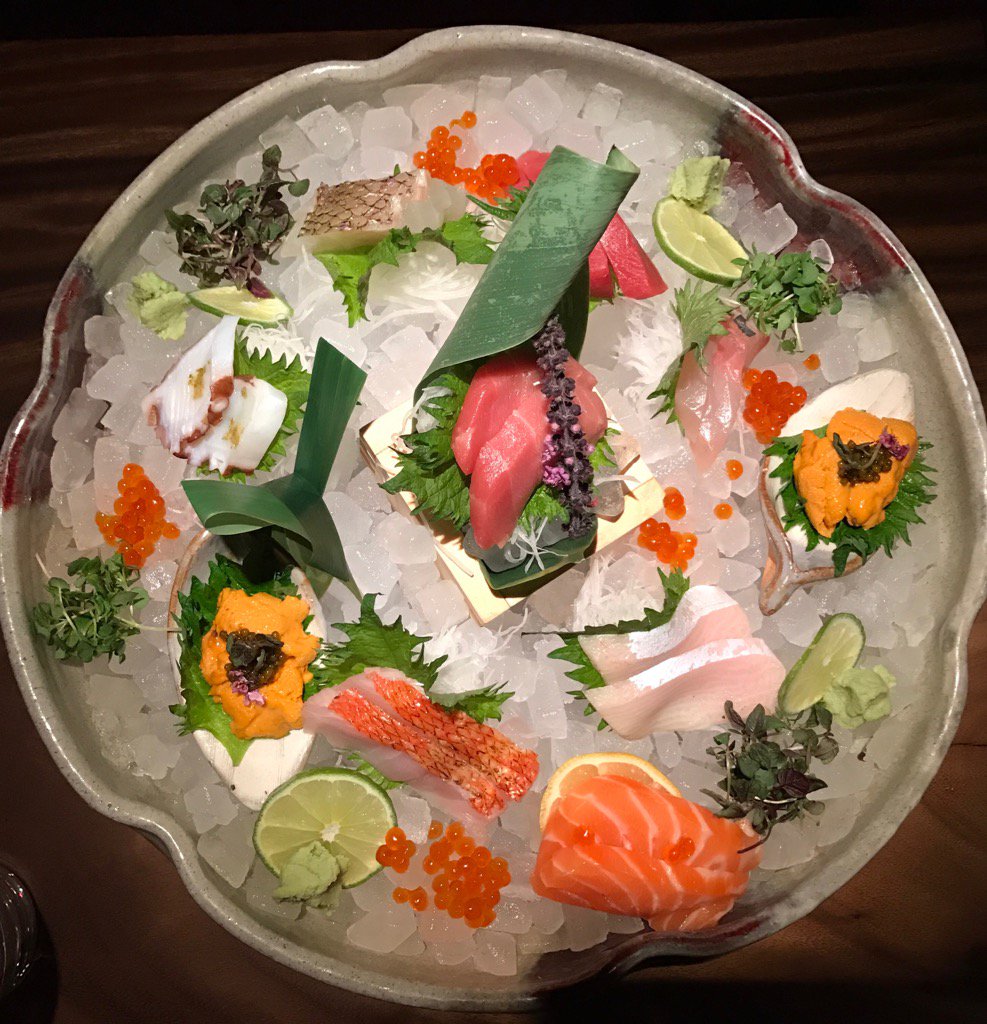 It’s hard because they’re all clones of each other.

What Nobu started back in the late 90s has spawned copycat after copycat, until these days it’s tough to tell your Hakkasan from your Yellowtail.

Morimoto, Nobu, and Mizumi are essentially the same restaurant. Remember Social House? That’s okay, no one else does, either. Kan’t rekall Koi? You’re not alone. Everyone of them follows the same blueprint. You’ve got your bar, your sushi bar, and your fancy steaks and your edamame. Then there’s the Japanese veggies, extravagant sushi and your robatayaki this and your yakitori  that. The only thing that’s different is whatever flourishes the chef want to add to their garnishes and presentation platters.

We ascribe this phenomenon to the improbable/ecologically indefensible rise of sushi as the protein of choice for a world looking to “eat healthier.” Ever since sushi became a “thing” around fifteen years ago, our insatiable hunger for what is, in essence, a pretty bland fish (tuna), has become the go-to ingredient for those looking to satisfy the hunger of the elite and the hoi polloi. Other fish (some of them actually tastier) are thrown into the mix, and by the time you’ve downed them, a few skewers and a “creative cocktail” or two, you’ll leave fat and happy and about $200 lighter. Which is just what the hotels want.

But here’s a dirty little secret: there isn’t a whole lot of creative cooking going on in any of them. This is formulaic food pure and simple. Putting ponzu and jalapenos on some sashimi is nothing new. In fact, it’s soooo 1996. Virtually everything else being dished up in these “modern Japanese” places is some repackaged idea the chefs learned from a Nobu Matsuhisa or Roy Yamaguchi cookbook, or from someone’s recent trip to Japan, where the chefs have been serving their minimalist food with a flourish for centuries.

(Cooking-cutter, faux creativity also being what the hotels want, the better to impress the rubes — just like they do with all those Cirque du Soleil shows. Each one assaults you with the same, idiotic acrobatics, only in different costumes; each served with different, annoying music.)

In this way have big box Japanese restaurants become the steakhouses of the 21st Century. Everyone’s doing the same thing. Everyone gets their fish from the same place; everyone’s using the same Sriracha. Only the window dressing is different.

Which brings us to Zuma. The brainchild(?) of one Rainer Becker…someone who sounds as Japanese as Fabio Trabbochi.

But we ate in his restaurant — the eleventh location, just opened in The Cosmopolitan* — and had a very good meal there.

Which is another thing about “modern Japanese” restaurants: like steakhouses, it’s pretty hard to have a bad experience in any of them. The formula is now so pat, and the techniques so well-taught, that whatever comes to your table is usually pretty tasty.

The first thing you notice about Zuma is the wood. There is lots of wood. Wooden hostess desk, wooden tables, wooden bars, wooden everything. We’re talking whole trees here, not some namby-pamby sliced logs: 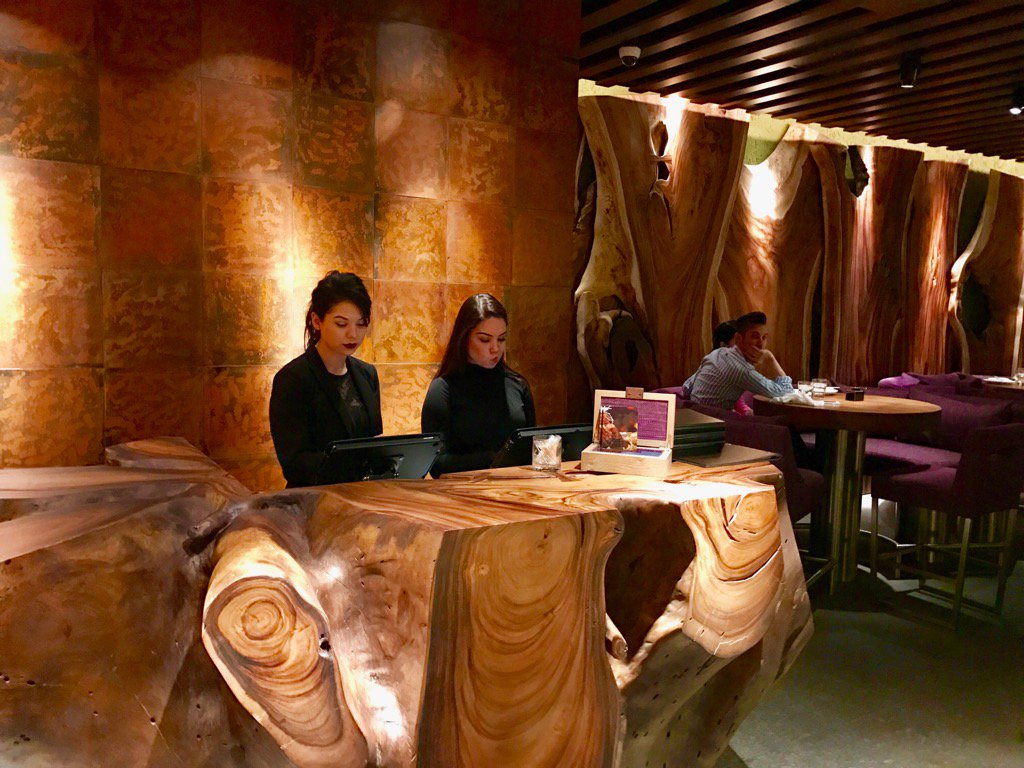 There’s a sleek, modern bar (natch), and nice high top, thick wooden tables (natch), and sushi bars (natch) and three kitchens (natch) and a lot of seats filled with lots of good-looking young people who look like they’re enjoying their skewers and their sashimi and their creative cocktails (triple natch).

What knocked us out was a beautiful lobster tempura: 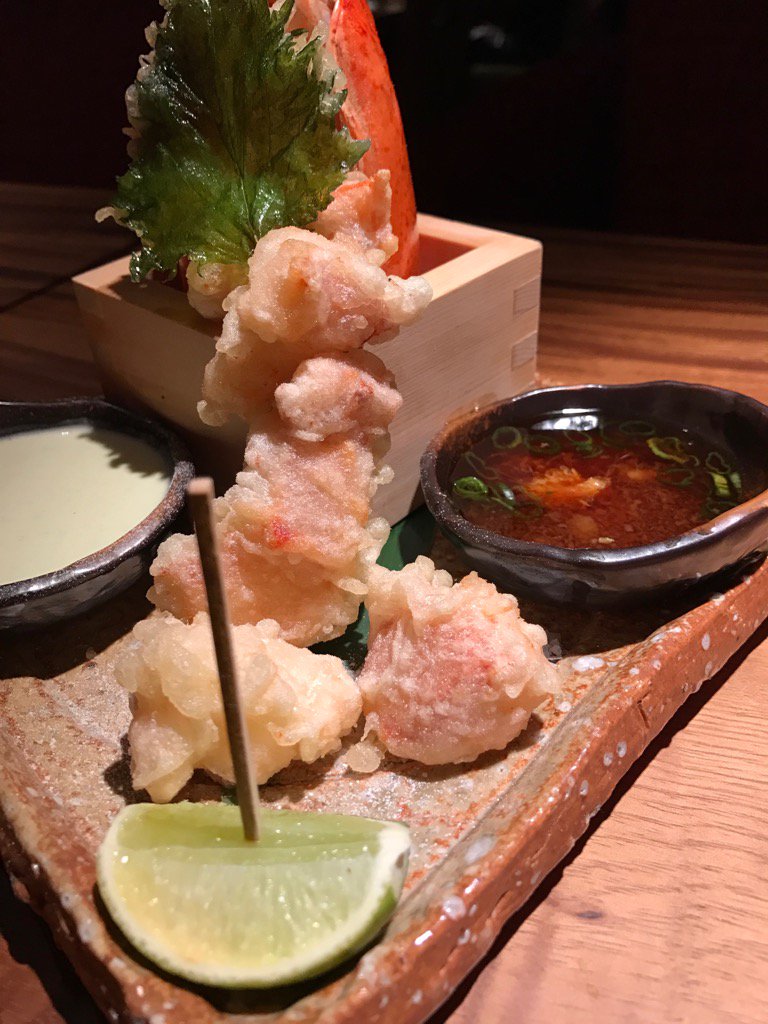 ….and a Japanese mushroom/rice hotpot of sublime earthiness: 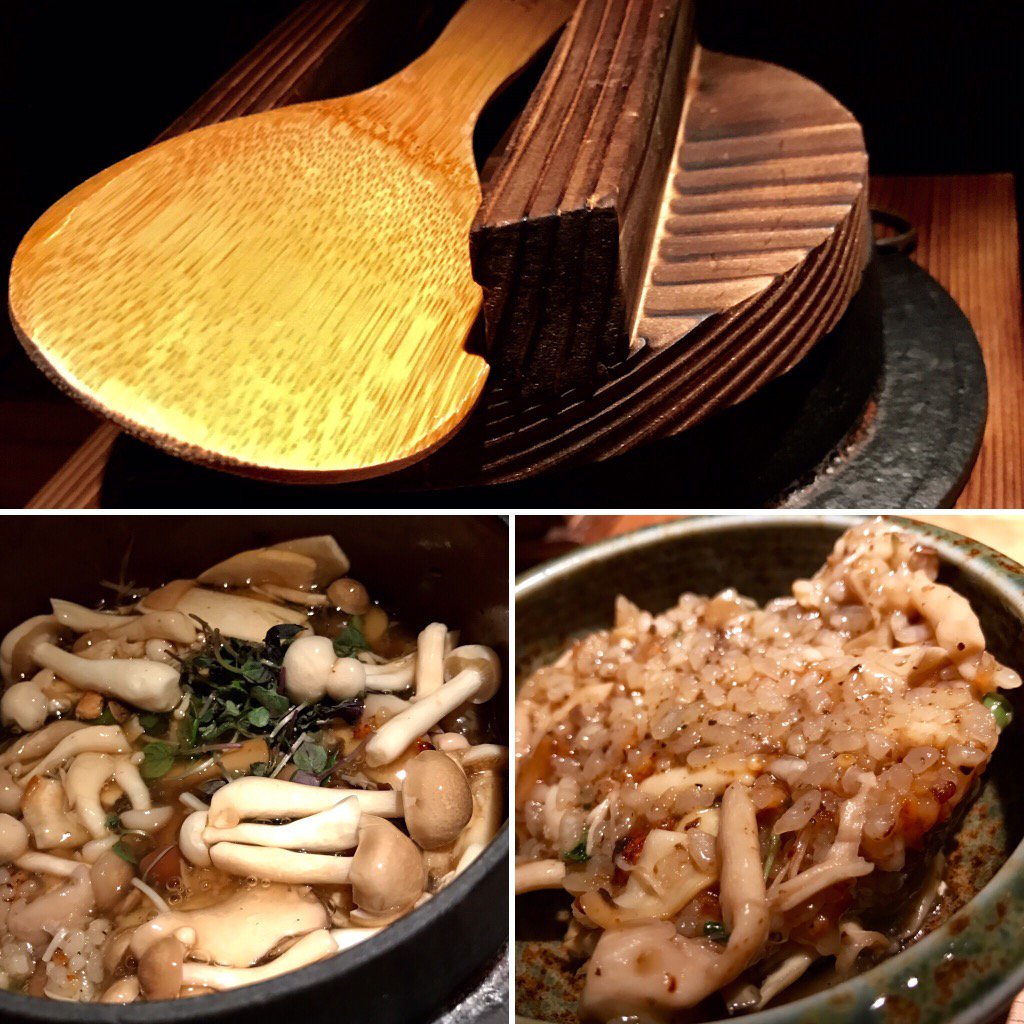 ….and a peppery watercress salad that hit all the right flavor notes: 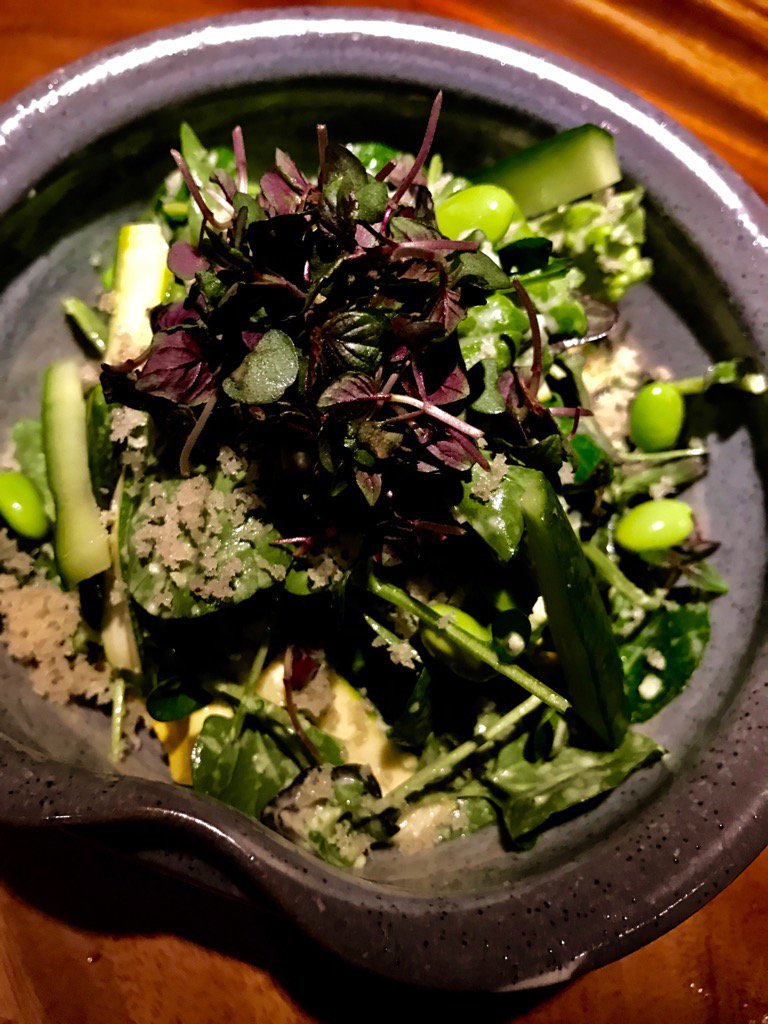 …it being dressed to a wasabi “T” with a subtle-yet-plenty-piquant dressing.

The fish was also top notch (see top of the page) with only a slice or two being a bit past its prime. The uni was out-of-this world wonderful, and the best we’ve had this side of Tsukiji.

The wine list is absurdly priced (natch) with the usual Strip gouges on things like $85 for a sauvignon blanc and $64 for a shot of gin. But hey! if some fool is going to pay that, who are we to argue?

What you can’t argue with is the formula. It’s getting as familiar as an old shoe, but at least Zuma is off a fresh and fast start. It doesn’t feel like a high-roller/club kids haven (Hello Hakkasan!), or a tired re-tread (Nobu), or celeb chef money machine (Morimoto), or a copy of a copy like Kumi. What it feels like is a chef and his company trying to tweak a template with enough fun stuff to keep the crowds and the fussy critics happy. Which will always bring a smile to our face.

ELV’s dinner for two was comped and he left an $80 tip.

* Which (we guess) makes Zuma the Ruth’s Chris to Nobu’s Palm, with Morimoto making himself the Morton’s of the bunch. Or something.

SEAFOOD DREAMS IN THE DESERT

Face it: we all eat too much meat. No one loves a great rib eye or cheeseburger more than yours truly, but consuming them isn’t good for our arteries, the planet or the cows. That’s where seafood comes in. People usually don’t associate great seafood with Las Vegas, and if you asked your average tourist, they’d claim buffets and steak houses as Sin City’s most iconic eats. But thanks to the wonders of modern transportation, and exotic, flown-in fare from around the world, seafood-centric chefs are plating a number of dishes that compete with anything you can find on the coasts. Las Vegas may be 286 miles from the closest ocean, but each of these taste like it just jumped from the water and onto your plate.

Resembling more of a tower than a patty, Emeril Lagasse’s jumbo lump beauty is an architectural marvel – big, buttery chunks of Maryland Blue suspended by the merest wisp of filler, capped with crunchy bread crumbs, and served with either a classic, coat-your-arteries remoulade, or a lighter, piquant relish in the warmer months. The fun comes in toppling that structure to reveal an almost disconcerting amount of plump crustacean within.

How red can seafood get? How delicious can shrimp be? These are but two of the questions that will be answered by your first bite of these Portuguese beauties. The third will be: How do I properly suck the head of a decapod? Why, with a dollop of sherry poured into the decapitated space, of course! The staff will happily guide you, and the impromptu shot of bisque you create will be a revelation in shrimp intensity

Urbane, theatrical, and expensive, Mr. Chow may be the perfect embodiment of the Strip’s culinary resurgence since the great recession. Its rice wine-steamed Dover sole might be Chinese fish at its most understated and elegant. The English and French may do wonderful things with this dense, cold water swimmer, but steaming it brings out a delicate, velvety smoothness that the Chinese prize above all else. All it takes is a little soy sauce and some bits of green garnish to complete a fish dish fit for the gods.

Genichi Mizoguchi, or Gen-san to his regulars, has singlehandedly turned Spring Mountain Road into a mecca for serious sushi hounds. First at Kabuto and now at Yui – his own restaurant – he features only the best fish from Japan or the west coast, each variety sliced and formed into the most ethereal combination of fish on rice that was ever popped into one’s mouth. This is minimalist, purist sushi, but whatever he’s slicing (and every night there are over a dozen featured species) it will be the best you can get this far east of the Far East. P.S. Yui Edomae Sushi celebrates its one year anniversary this week.

Oh, Andiron lobster roll, how do I love thee? Let me count the ways: Is it your soft, squishy, split-buttered bun? The rosy red-white chunks of shellfish? Barely held together by mayo? The crunch of celery? The wisp of dill? Truth be told, it is all of these things and more. The lobster roll at Andiron is the perfect evocation of sitting on a picnic table by the Connecticut (or Rhode Island or Massachusetts) shore, with the brisk salinity of an Atlantic breeze in your hair, eating the most iconic and American of foodstuffs. There should be nothing skimpy about the meat, and nothing too overpowering about the seasonings or binder. It should be all about the lobster, tucked and overflowing out of that beautiful bun. And here it is.