Let us not forget the value of rot. All great cuisines use decay and stench as part of the palate. Red wines from Burgundy and Loire can have a goût de terre — and earth taste, like good garden soil being turned over in the spring — or they can have a goût de merde — a shit taste, which has the fragrance of fine cow manure, old slightly dry , and hay like on the outside with  just enough interior wetness to propel the fragrance outward, and all this nestled in a field of fresh green grass. These tastes, the goût de terre and goût de merde are prized by connoisseurs and old bodies like me.

It is a portion of rotten apples that gives good cider its and and subtlety. I knew a man in Maine who claimed his parents’ longevity came from eating a lot of bread with blue penicillin mold on it. Botrytis cinerea, that mold that grows on the grapes that make Sauternes, aid the evaporation of water from the grape, making a more concentrated flavor in the wine. 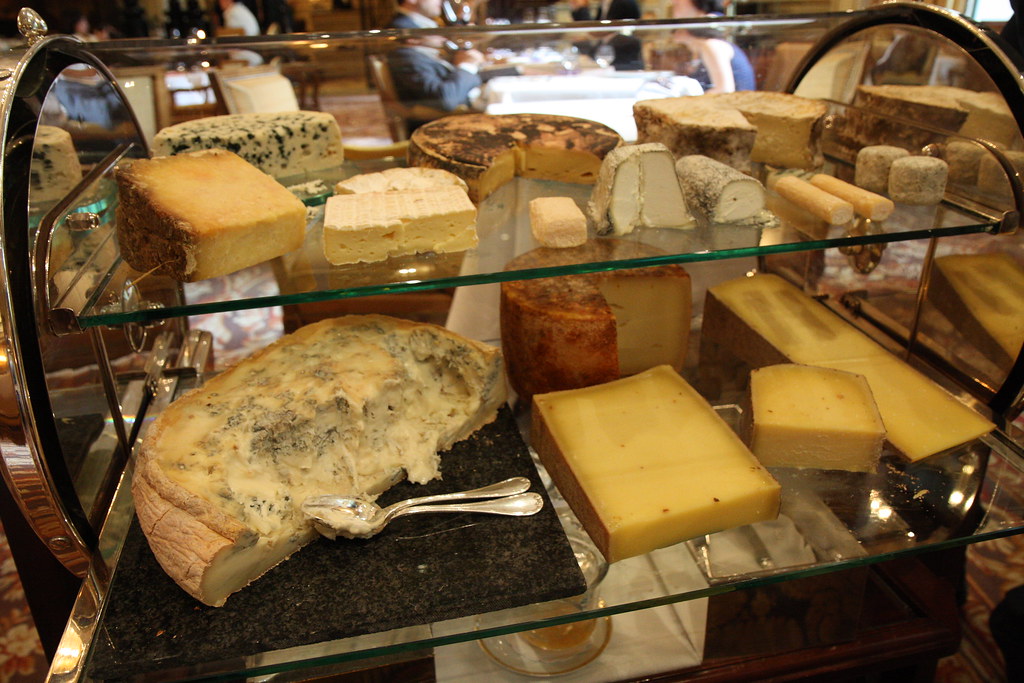 Beer is decayed malt and hops. Whiskey is decayed grain (barley, corn, rye0. Vodka is decayed potatoes. Sauerkraut is decayed cabbage. Wine is decaying grapes, continuing its decay in the bottle, making fine old wine. Some English people like their beef aged to the point where maggots are crawling through it. A good beef stew or red spaghetti sauce, should sit on the stove, melding its flavors, for a least a day. I once left a red sauce out for three days and it began to ferment like wine, and had spritzy little bubbles in it. I was leery at first, but I heated it up to kill any strange growths and  delicious it was. – George Vincent Wright, “Cuisine Sauvage” 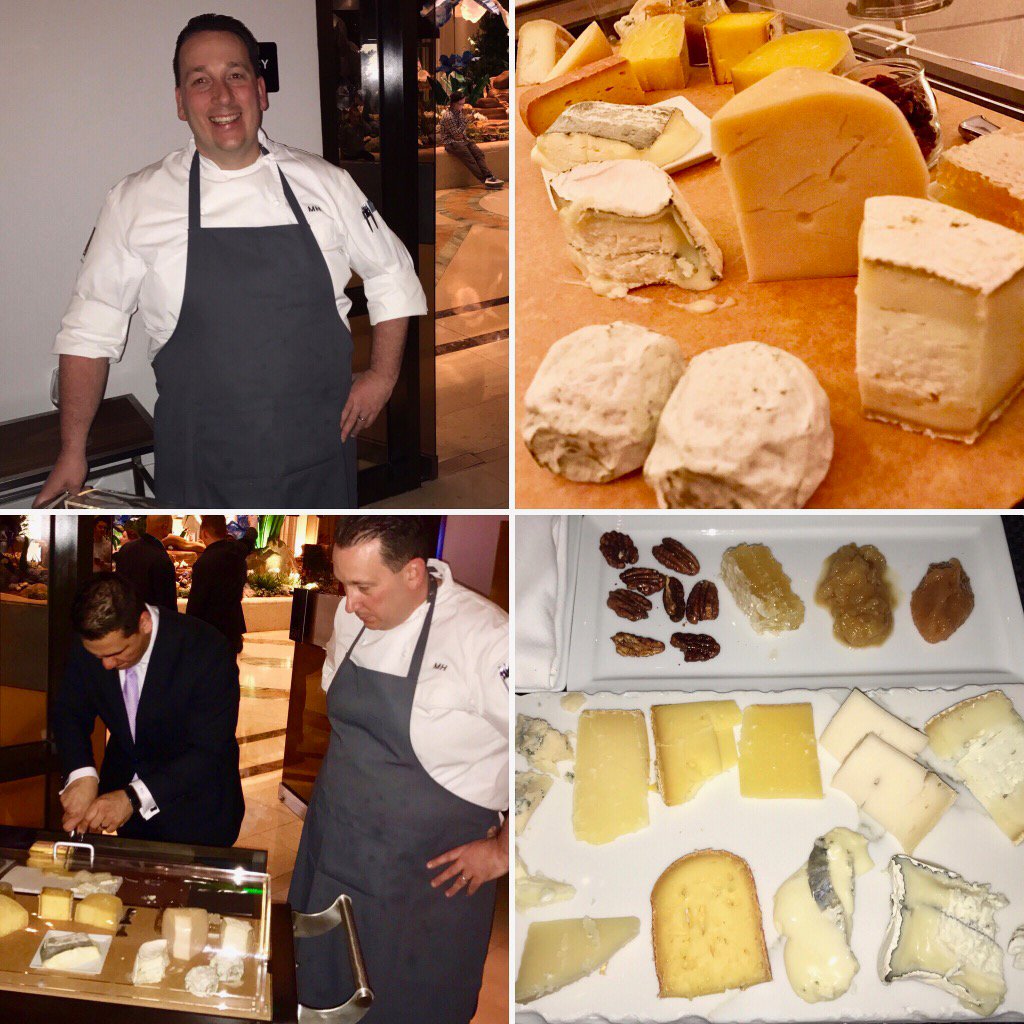 Why is Matthew Hurley smiling?

Why are we smiling these days?

Because we, like Matthew, are fromage-a-philes. Lovers of the fermented curd. Crazy for quark. Choosy about cheddar. Passionate for Parm. You get the idea.

Cheese carts are in short supply in Vegas these days. Cheese in general is not given its proper place at the table in all but a few places. Spanish cheeses are well-represented (but not displayed) at Jaleo, Bazaar Meat, and Julian Serrano, Morel’s does a nice job with its eclectic selection, and our big hitter French joints (Robuchon and Guy Savoy) are ripe with the stuff. But when’s the last time you were offered cheese in an Italian restaurant? Or saw any displayed?

Is it because Italy doesn’t make much cheese? Or isn’t proud of what its formaggio? Or perhaps Italians don’t care enough about their curds and whey?

However you slice it, Italian cheeses are the Rodney Dangerfield of ingredients in Las Vegas’s Italian risorante.

But what about American cheeses? Our artisanal cheese industry has grown by leaps and bounds over the past 30 years, and American cheeses are now some of the best in the world. Why don’t they get any love in Las Vegas?

Is it because Americans don’t eat much cheese?

That’s probably, partially true. We are only 19th in world cheese consumption, well behind such cheese consumers as Norway, Luxembourg and Iceland.

Or perhaps it’s because we’re ignorant about how to eat cheese — as most Amuricans still think of it as a gooey topping for pizza and burgers, or shredded into taco oblivion.

In case you haven’t heard, handmade real cheese, made with the purest, freshest milk is now being made by American fromageries from Vermont to California, Oregon to Georgia.

Many of these cheeses echo iconic European curds — Meadow Creek Grayson is trying very hard to be an Alsatian Munster; Cabot Clothbound Cheddar wishes it were a Neal’s Yard Montgomery — while others like Rogue Creamery Smokey Blue could only be made in the U.S. of A.

The fun part is tasting all of them and deciding for yourself. Europeans have the right ideas when it comes to cheese: either make a meal of it by itself (with some bread, fruit and/or a bottle of vino), or use it as the ultimate digestivo — the amino acids and enzymes in cheese making it quite useful to help you digest whatever came before it.

Great cheese is a fitting climax to any great meal in a restaurant that’s not a sushi bar. Sadly, the head-’em-up-and-move-’em-out mentality of most of our Strip restaurants does not allow for choosing and eating cheese in the leisurely way it should be enjoyed. Kudos to CUT (and Hurley) for bringing something new and fresh (in the form of something old and fermented) to one of the best steakhouses in the country.

What a fitting birthday present for CUT to give itself, and its customers.

The Palazzo Hotel and Casino

Below is the cheese menu at CUT with appropriate wine pairings. You’ll notice there’s nary a red wine in the bunch — the tannins in red wine always fight cheese, and increase the wine’s sourness. If you want to enjoy wine with cheese, drink a white, or something with a touch of sweetness in it. Port works beautifully. Cabernet sauvignon works not at all, no matter what the Bordelais say. If you’re buying, I’d pick the Beerenauslese; if I’m buying, that Taylor-Fladgate will do just  fine.

ELV note: We’ve been consistently disappointed by Mario Batali’s more affordable offering at the Venetian ever since it opened. (A lunch there a little over a year ago had us longing for the enforced mediocrity of Canaletto — literally a stone’s throw away in the same shopping mall.) After a succession of paltry and pathetic pasta performances, we had a face to face with Molto Mario and his partner Joe Bastianich last fall and gave them details. In return, they made all the right noises and assured us that things would change. By the looks of things, they haven’t. Below, uber-foodie and Official Friend of Eating Las Vegas David Ross explains (in a tone more reasonable and less hyperbolic/venomous than you are probably used to at this web address) why this is just another celebrity chef money machine — to be avoided by anyone with anything but a company credit card and low expectations. (ELV wonders if, with their busy schedules, Mario and Joe ever actually taste their restaurant’s food) A partnership between Mario Batali and Joe Bastianich, (you know his Mother, Lydia, she cooks Italian on PBS), Otto Enoteca should be a soft introduction to guests of the marriage between Italian wine and quality ingredients crafted into familiar, yet authentic dishes. That’s one of the better aspects of what this restaurant should be. Yet the expectations of dining in the restaurant of a former “Iron Chef” is quickly tempered by reality. Otto Enoteca is both the best and worst of the Celebrity Chef culture in Las Vegas.