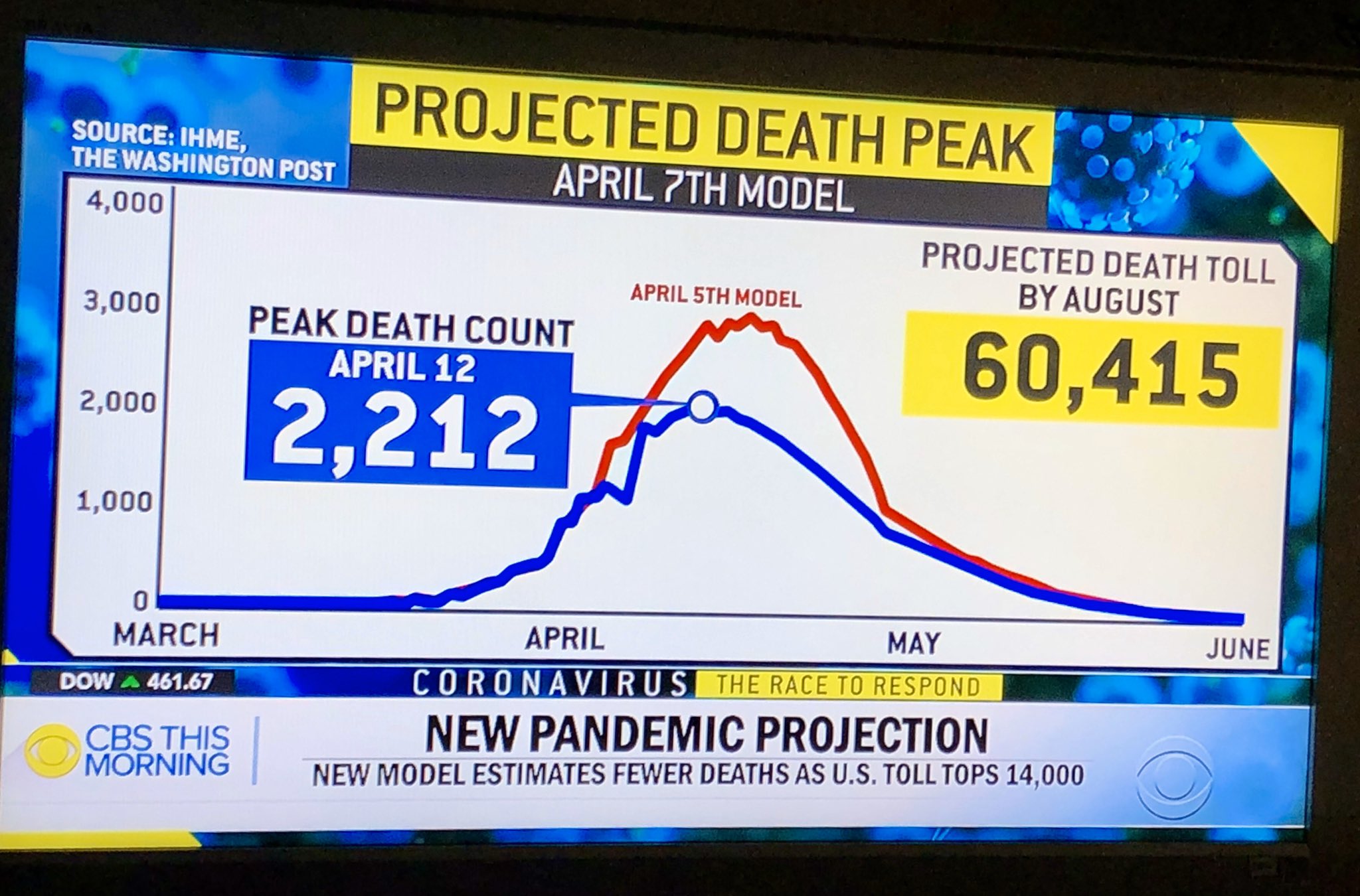 (If coronavirus predictions were a stock, you’d sell)

Most people have succumbed to numbness by now. Which is just the way the government likes it.

The days click by with nothing happening, nowhere to go. We are prisoners in jail cells of our own making.

Don’t expect the birth rates to be up in 9 months. Caged animals don’t have much sex.

The tide is beginning to turn. Slowly, inexorably, the news is focusing more on the economic impact of the shutdown than on the virus itself.

Even now, the trigger words and action verbs  that have been used to describe the coronavirus — “crisis”, “ravaging”, “war”, “devastating”, “battle”, “overwhelming” – are being applied to its aftermath.

Facts and logic are stubborn things. Obdurate and unyielding no matter the torrents of emotion thrown at them.

The facts are, day-by-day, establishing that the threat of the Covid pandemic was blown out of proportion.

Undeniably, though,  extreme, unprecedented harm has been done to the American economy and the lives of the healthy people who make it run.

As Michael Burry puts it so succinctly:

This is a new form of coronavirus that emanated from a country, China, that unfortunately covered it up. That was the original sin. It transmits very easily, and within the first month it was likely all over the world. Very poor testing infrastructure created an information vacuum as cases ramped, ventilator shortages were projected. Politicians panicked and media filled the space with their own ignorance and greed. It was a toxic mix that led to the shutdown of the U.S., and hence much of the world economy.

Politicians weren’t the only ones who panicked. Within about a ten day period last month, the media went from inquisitiveness to healthy skepticism to full bore hysteria. Fanning the flames of fear. Using scoreboards to chart the infection/rate, and basically scaring every American shitless about a virus that was “ravaging” America. (Never forget that the justification for this shutdown claimed 60% of Americans would be infected, and that 3% of those infected would die. Figures that now seem beyond ridiculous.)

Sports coverage and news media share one thing in common: they are all about appealing to emotions. You don’t have to go very far on the internet to see the media doing its greedy, sinister best to keep passions inflamed: “Deaths Soar”, Pandemic Catastrophe”, and “America’s coronacrisis has arrived” headlines are all over the place. Every famous person who dies “from Covid complications” is trumpeted to keep you riveted. No word, ever, of what other medical conditions they were suffering from.

The Atlantic, two weeks ago, predicted:

…more than 1 million Americans would succumb to COVID-19 in the next few months. That is about as many people as the country lost in the Civil War, World War I, and World War II—combined.

As of today, the US has 385,449 confirmed cases of COVID-19 infection. There have been 12,216 deaths. The prediction (all of which have been wrong so far) is now that approximately 60,000 people will die of this by August. No word from the “experts” about how many of those were already at death’s door.

Making it a contest (a “war” on coronavirus) did the trick. Everyone was either numbed into submission or galvanized into camps — tribalism writ large if you will — with degrees of virulence far outstripping anything the infection could have wrought. On one end you had the hyper-aggressive health Gestapo (liberals, mainly, oh the irony) yelling at people for walking down the street; on the other, there are the homeless, the clueless, and the working poor who didn’t give a shit. (The working poor, BTW, can’t afford to give a shit.)

In between there are the legitimately fearful, the concerned, and the sympathetic. Counterbalancing them are the skeptics and the economists who, when they’re not being shouted down by shutdown defenders, are trying to make sense of  what we’re doing to ourselves.

And then, of course, there are those seeking to make political hay out of this mess, which doesn’t do anyone any good.

A rational, logical argument against the continuation of the shutdown begins with citing facts. Here’s the way the arguments usually go:

When you point out that the confirmed infection rate of 0.12%. Not 12%. 12/100 of 1% — you get told, “it could’ve been far worse.” This is an un-provable assertion. Of course if you lock everyone in a dungeon, lots of bad things won’t happen to them. Only when they’re out of the dungeon can you properly assess the level of danger. In this sense, Sweden is the world’s “control group”, and why it’s treatment model is being looked at so closely.

And when the worst case figure of 1.7% death rate (of those seriously infected, most of whom were old and sick) is pointed out, you can expect a barrage of, “What if it was your grandpa who was dying?” — always the sucker punch thrown when the reasoning round has been lost.

Also, what you never hear from the public heath pundits is that they have yet to find a cure for the common cold. Good luck finding a vaccine.

Aside from banning meetings of more than 50 people, and the usual hand-washing and cleanliness guidelines/suggestions, Sweden appears to have left their economy untouched. Bars and restaurants continue to operate, as do most businesses.

It all really comes down to a simple debate: Is the cure worse than the disease? And like all good argument, both sides are right….or at least have a plausible case to make.

On the one hand you have the sacrificing of the mental, physical, and financial health of an entire country to forestall the spread of a virus that appears very contagious and fatal to old, sick people.

On the other, you have an appeal to emotion and humanity.  As logically fallacious as the resort to emotionalism is, it is understandable. Viral infections are cruel, invisible beasts who work in the stealthiest of ways. These deaths are tragic. The short term strain on health care systems and professionals (in some areas) has been immense. But Covid has a long way to go before it competes with the Bubonic Plague as a contagion.

There is no winning this argument. Some will argue that the “curve flattening” was worth it. And that being human means no means should be spared to save (or prolong) lives.

But in the end, what will it take to justify the destruction of the American economy? Perhaps nothing. What’s done is done.  Appeals to emotion and a string of speculative “what ifs” were all that counted when this car was being driven off a cliff. Now, it’s in free fall. All we’re doing is trying to figure out how to pick up the pieces of something we didn’t need to destroy in the first place.

When the recriminations come, they will be ugly but immaterial. No one will admit fault; everyone will circle the rationalization wagons.

Who will be accountable? Does it even matter? Once you’ve shot yourself in the foot, why you pulled the trigger becomes irrelevant. Perhaps you’ll learn not to carry a weapon of fear around any more. Probably not. It’s fear that’s keeping you alive, you think to yourself, even after it’s killed everything around you.