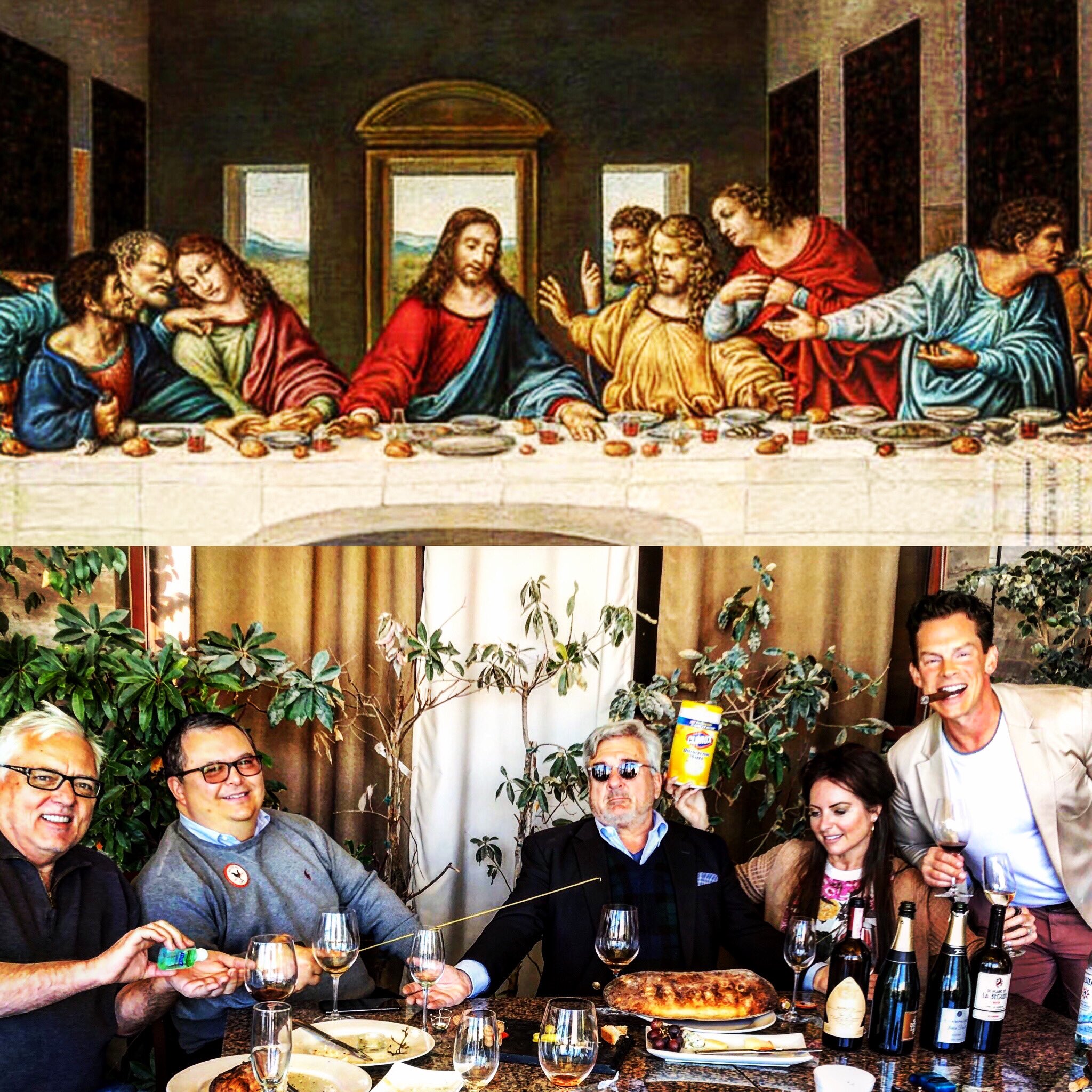 (My other specialty: walking on water)

“Take out, grab-and-go only,” the Gubenator declares. And everyone falls into line. It’s a mere band-aid to local restaurants, who will never be able to stay open under those conditions. Most don’t even try.

Some brave souls, like Ohlala French Bistro in Summerlin are going to try to power through. It seems that the smaller the joint (i.e., the more the owner can do on their own without staff), the easier it will be for some to survive being nothing but a  ghost kitchen. Rooster Boy Cafe fits this description perfectly, as chef/owner Sonia El-Nawal already is a one woman band at her tiny operation. But for most venues that aren’t named Chick-Fil-A or McDonald’s? Fuggidabadit.

Friday is a weird day around the Curtas manse as well, as Mr. C spends the day feeling sorry for himself and watching documentaries, while The Food Gal® is nailed to her computer, restructuring and cancelling contracts (she sells advertising). By the end of the day, it’s a running joke that she’s busier than ever NOT making money.

As dinnertime rolls around, a good friend — Don Cramer — contacts us with an idea: Why don’t we do a Facebook Live chat about local restaurants who are remaining open?

We tell him we’re heading to Ohlala (and dining al fresco with our own table and chairs) and he says he’ll be right over.

So, Don shoots a Facebook Live, we freeze our buns off, and chef/owner Richard Terzaghi feeds us some beautiful paté and a steaming bowl of French onion soup in the parking lot. Classy AF, don’t you agree? 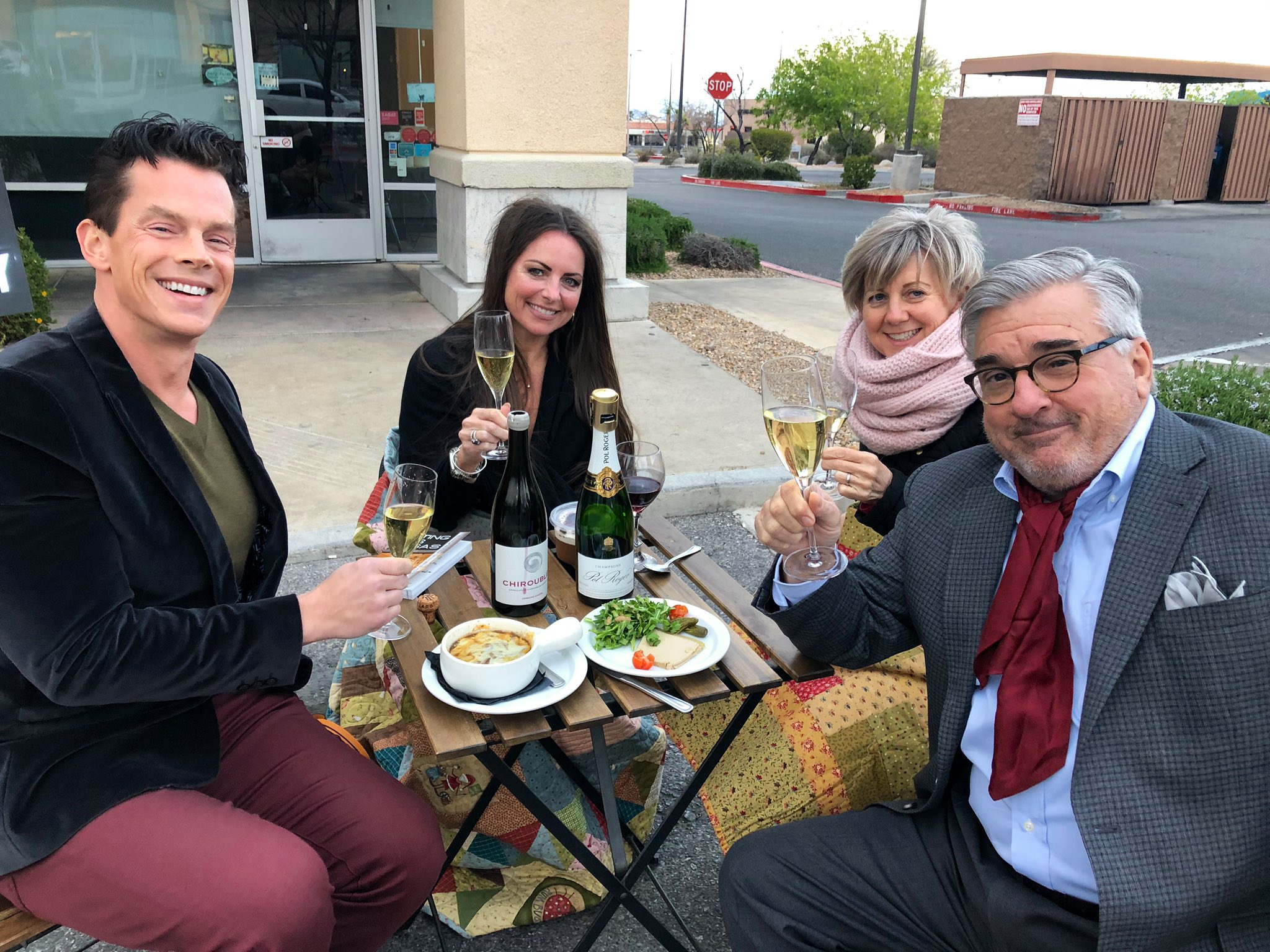 “I’m not going to let this thing get me down,” Curtas tells himself, even as it’s getting him down.

Saturday morn breaks, and Las Vegas’s biggest foodie girds his loins for a day visiting the front lines of this war against common sense.

Breakfast, lunch and dinner, here they come, with friends in tow, to see the damage for ourselves.

The first stop is Rooster Boy. Sonia has set up an ordering table out front, and is doing a limited menu of her specialties.

Orders are given, fabulous food shows up, and Las Vegas’s best breakfast is declared in fine fiddle.

– Her menu is very limited.

– Call ahead and check daily. Don’t act like John Curtas and barge in and order something; he’s an asshole.

– This could end up being a good model for her continued business (less hassle with taking orders and waiting tables).

– In some ways, a small operation like hers is better able to adjust and still keep its customers.

– Curtas doesn’t give a shit about social distancing. 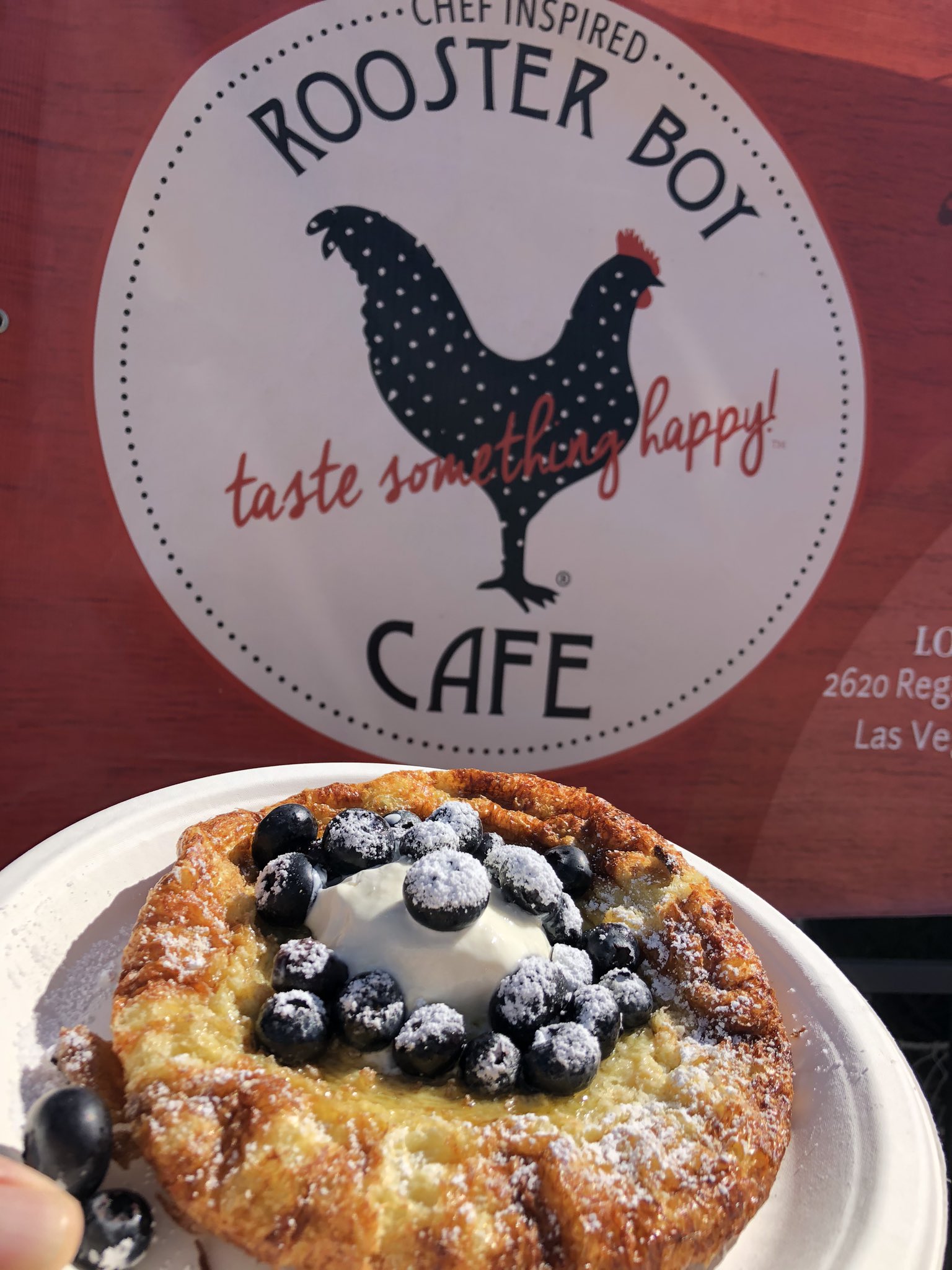 If there’s two things this shitshow of a public health fiasco is going to teach us, it’s that restaurants are indispensable cultural institutions, and that it’s a very short slide from well-intended vigilance to outright autocracy.

This becomes evident from Mr. Curtas’s next two stops.

Curtas has been friends with Rhonda and Jeff Wyatt since they took over Marché Bacchus Bistro and Wine Shop fifteen years ago. Many a day and evening they’ve whiled away over bottles of vino. He considers Jeff the go-to guy for Burgundies in Nevada, and although the selection is small, there’s never a bad buy in the bunch. Some would say this coziness keeps Curtas from being entirely objective about MB, but he’s fond of pointing out that he gives it to the chef with both barrels if the cooking isn’t up to snuff.

None of that matters today, as he drops in to buy some wine and give the Wyatt’s support, both emotional and financial.

Rhonda tells him she’s already gotten blowback about their Saturday wine sale. “Non-essential!” the finger-waggers scream. The Gubenator’s order isn’t 12 hours old and already people are chastising and accusatory. It’s all ridiculous (since nothing prevents people from buying booze at the supermarket), but that doesn’t keep folks from losing their shit over someone trying to sell a few bottles and stay in business.

Side bar: Anyone who’s ever wondered how Nazi Germany turned against the Jews has only to follow (so-called) liberals falling straight into fascism the second they think their well-being is being threatened.

It’s all very depressing, so Curtas and friends buy a boatload of wine and spend some hours getting hammered on the MB patio. Is it good wine? Of course it’s good wine! When the world is burning to the ground around you, you might as well blow your wad on great hooch. 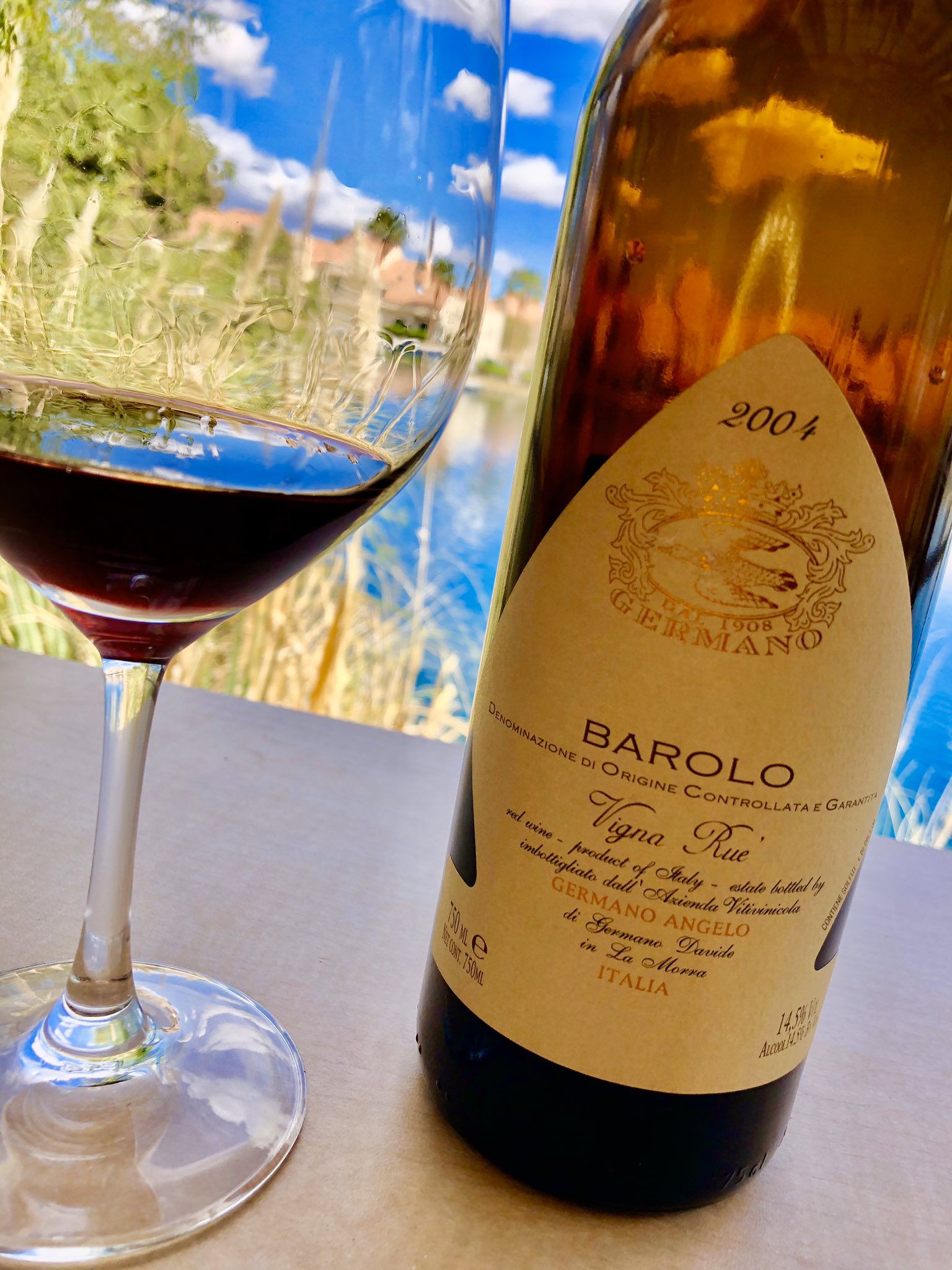 Buzzed on champagne and Barolo, Curtas and his too live crew head on over to Locale to show support for another good citizen who’s trying to soldier on through this debacle — recent James Beard nominee Nicole Brisson.

Side bar: Curtas likes Locale, but it’s too fucking far from his house (15 miles) to make it a regular stop on his restaurant rotation. It’s also too fucking far for almost anyone who doesn’t live in the far far southwest part of town to get to, which is a shame because its location (North Korea, a friend calls it) is a big hindrance to its popularity.

Like North Korea, the militarists here are everywhere and ready to clamp down on anyone who doesn’t agree with them, as you’ll see below.

So Cramer and Curtas shoot another Facebook video with Nicole, and chow down on the patio with some take-out food. Martin Scorceeze and Bobby DeNiro they are not, but hearts are in the right place, and a good time is ha by all.

Interview over, they eat; they kibitz, they drink and smoke cigars — on the restaurant’s patio way away from its front doors. This warms Curtas’s cockles. For an hour or so, he almost convinces himself the world has returned to normal.

He also notices a steady stream of folks going to Albertson’s a few doors down. Lots of them. In groups large and small, and nearly every group with a toddler or infant in tow. Much more than his little band of five hungry souls. This fact will come back to haunt him the next day.

The next morning, this shows up on some neighborhood website: 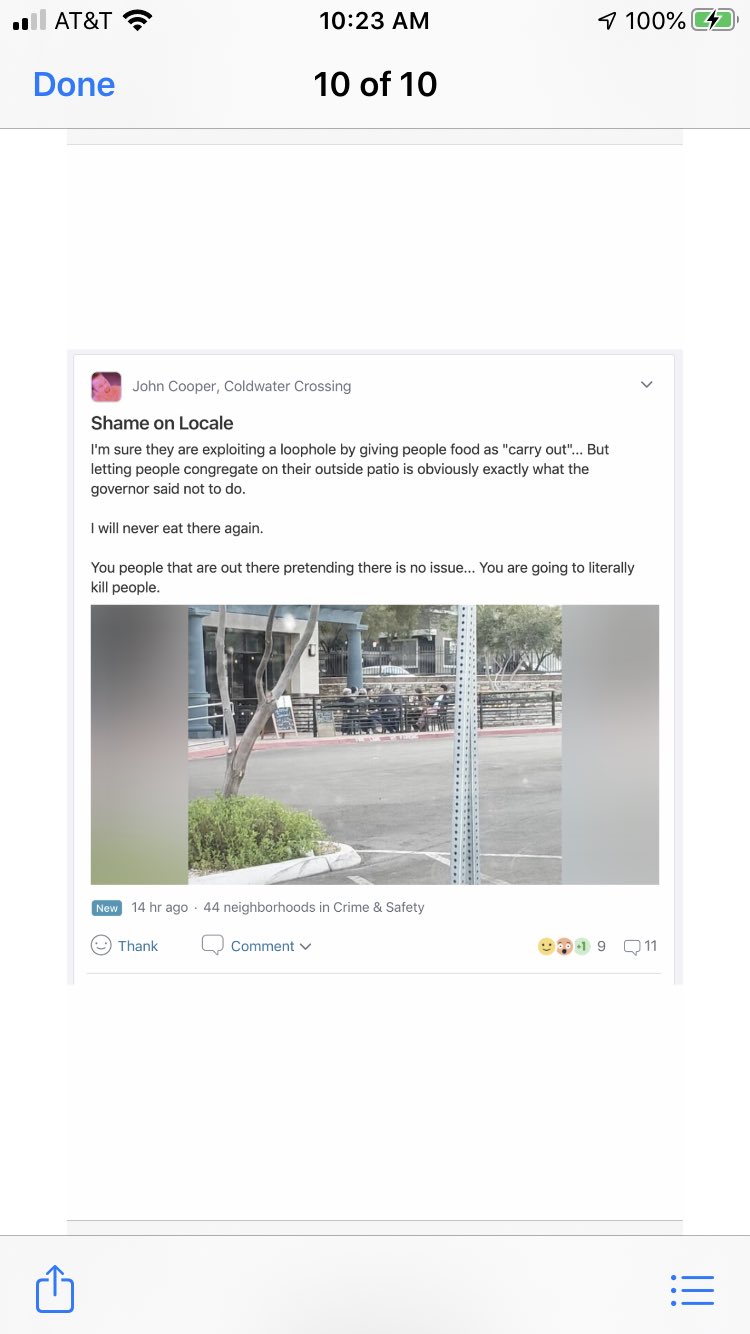 “You are literally going to kill people,” someone named John Cooper says.

Someone named John Cooper does not know we are going to kill people. He only feels it. He feels it because the media has been drumming fears into him since February.

He has no idea how or why we would accomplish this. All Someone Named John Cooper knows is that the government and the media have spent the last six weeks whipping him and everyone else into a paranoid frenzy over how a superbug name Covid_19 — a coronavirus more contagious than other cold/flu viruses but no more deadly than the common flu — can be spread, and that we must all band together to stop the spread.

The government has very few tools at its disposal to do this. It can support the health care system when it gets overloaded, and it can encourage people not to spread disease, and, as a last resort, it can shut down things by declaring an “emergency.”

As of yesterday, there are 200+ cases of this virulent upper respiratory infection in the entire State of Nevada. Exactly four people have died from it, two in Southern Nevada. As emergencies go, it’s a pretty lame one.

From U.S. New and World Report: Most patients exhibit mild or moderate symptoms, but severe symptoms including pneumonia can occur, especially among the elderly and people with existing health problems. The vast majority recover. 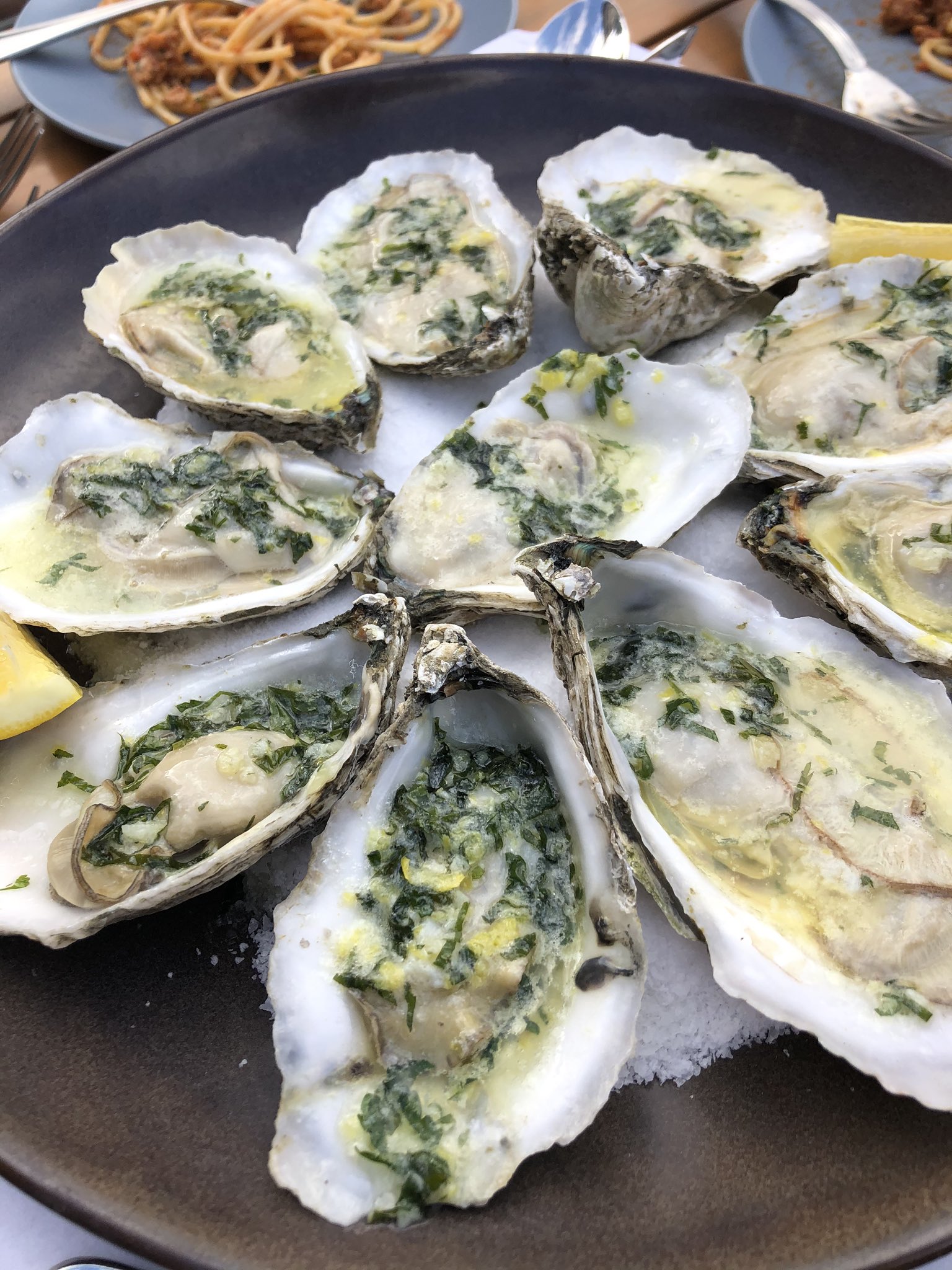 No one’s  going to kill anyone by sitting on a patio chatting, eating delicious oysters, and smoking cigars. Respectfully, Someone Named John Cooper, you are out of your mind.

But honestly, no one blames you, SNJC. You’ve had a steady stream of fear fed to you for weeks. Constant stories of how the virus will scale up until millions of Americans have it. Millions of Americans don’t have it, Approximately 47,000 Americans have had it. And they’re getting over it, SNJC, and feel just fine. But you never see media stories on the recoveries; you’ll only see people in respirators, and projections of who’s “going to get it” (they hope), so you’ll stay riveted to the drama.

Literally, in America, only two people in a million have died from it.

What many are calling a pandemic is really senseless panic — an unholy alliance of gloom-and-doom doctors, sky-is-falling statistics, health care Cassandras, hypochondriacs, a manic media, and do-gooder liberals — coming together to paint an end-of-days picture over a superbug. That’s it. We have as much chance of eradicating Covid_19 as we do of stopping sunshine. So get over it, and go have a good time.

Thanks for inspiration, SNJC, now, let’s get these myths disposed of so life can get back to normal.

Do you feel better? John Curtas hopes so. 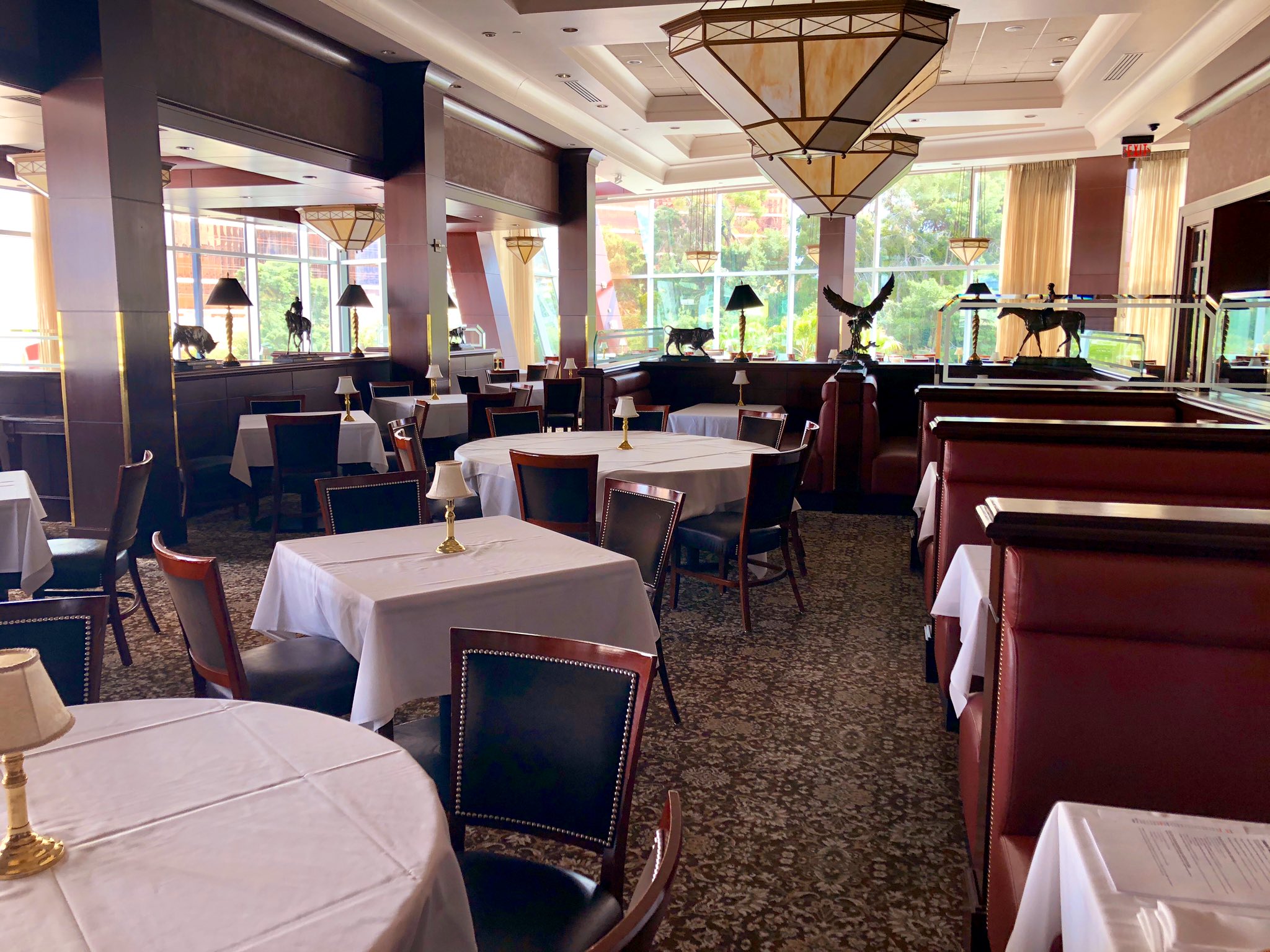 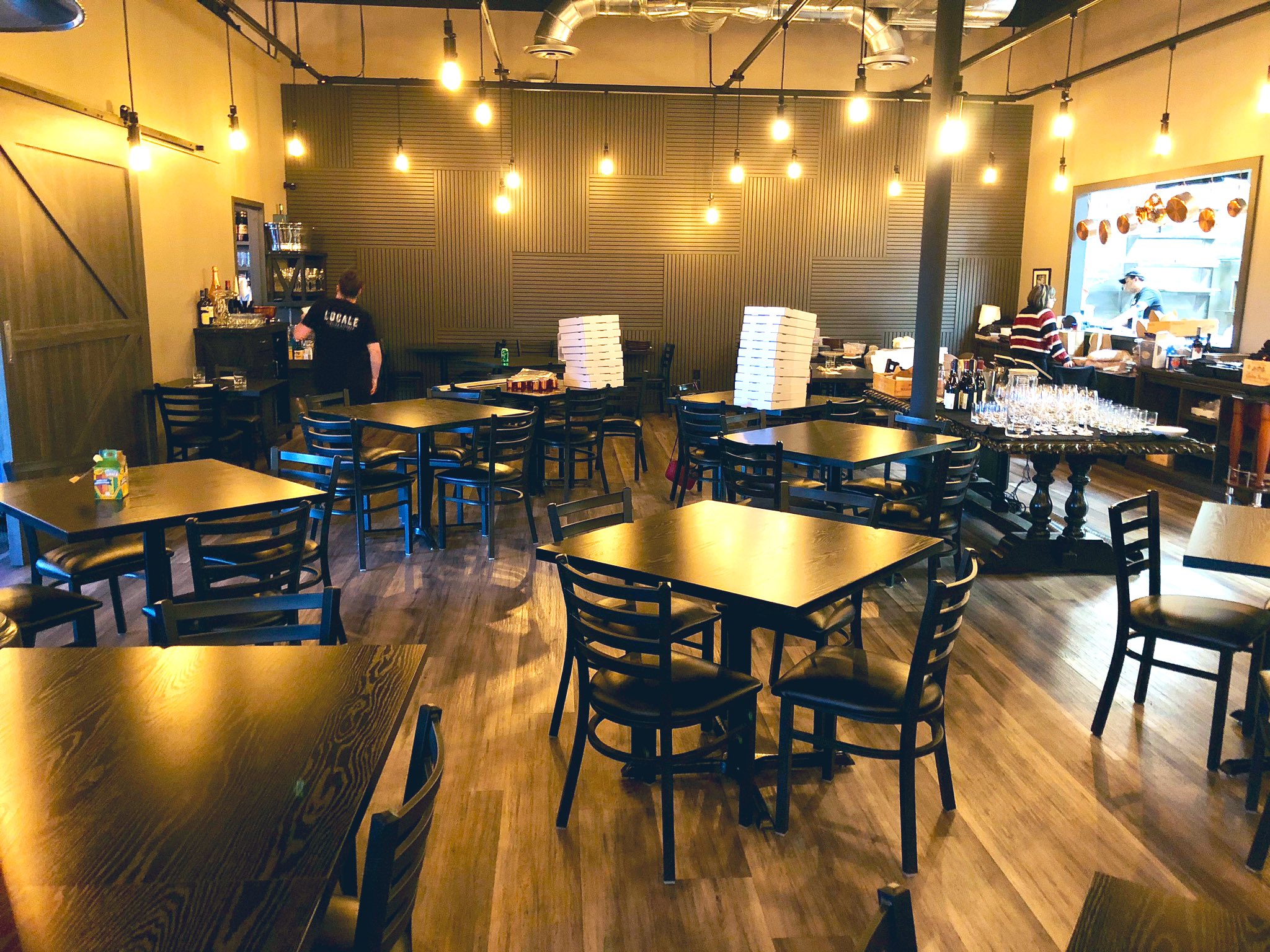 4 thoughts on “The Covid Dairies Vol. 2”