What do you say when you visit a restaurant to get the spectrum of great dishes? Also, what’s your approach with an unfamiliar cuisine (if you have one)?

I assume [many places] know who you are, so they will oblige a sampling of their best dishes? I’d like to know what to say, not being famous, and who I need to say it to (waiter, maitre’d  etc) so I can get a spread like that. Or do you just order a bunch of stuff off the menu, creating your own spread?

Do you just ask what’s good then let the restaurant serve their best? Or do you pick random things on the menu? I ask because I don’t know what I don’t know. I’ve eaten all over the world, feel food adventurous, maybe even could be a division A foodie, but am always learning/seeing things in your posts/blogs that look delicious yet unfamiliar. I’m sure a great deal is just experimenting and eating your way to familiarity, but even you must come across dishes you’ve never heard of… I guess that’s a part of your talent as a critic, is having a nose for finding hidden gems.

There’s a lot to unpack here, so we’ll break down your questions into different areas and try to give you some insider tips and a glimpse inside our mind (you wouldn’t want more than a glimpse) to let you see how we approach things in various scenarios.

The familiar restaurant is one we’ve eaten in many times. It’s one where they know me and I know them. Either I’ve even seen the place through multiple incarnations (e.g. Ferraro’s, Spago), or multiple chefs (Michael Mina, Le Cirque, Twist, Guy Savoy, et al), or maybe I just love it and have eaten there more times than I can count (CUT,  Marche Bacchus…). In these places, the management and chefs know I’m not interested in trying 10 different things, nor do I want a tasting menu (I almost never want a tasting menu these days, even when it’s the only thing they serve). Most of the time they know I’m not coming in for a full meal. It’s almost understood that I’m there to try new things on the menu, or seasonal offerings (pretty much the same thing), or to sample just enough to tell me the place is still on its game.

GM: “What are you in the mood for, Mr. Curtas? Would you like me to have the chef send out a few things or would you rather look at the menu?”

Me: “Let me take a peek at the menu, and then we’ll see what sounds good.”

Two minutes later, the chef appears before I’ve had a chance to read anything or even unfold my napkin.

Chef: “What are you in the mood for, Mister C. ? Would you like me to send out a few things or would you rather look at the menu?”

Me: “Thanks. Give me a minute with this great looking new menu ….but what I was really thinking about was maybe an appetizer — boy, those pastas sure look good — then maybe that wild Tasmanian borage and Antarctic duck tongue okonomiyaki risotto with Manchurian pickled leeks and purslane gastrique (TASTY!)….then perhaps splitting a main course with The Food Gal®….I don’t know….”

Chef: “Okay. Sounds good. I’ll check back with you in a few minutes.”

Before we’ve even lifted a fork, the manager then reappears.

GM: “Are you ready for those pastas now, Mr. Curtas?”

And so it goes…

What I’m trying to say is I’m always trying to create my own (large or small) spread, but what I want often gets supplemented by what the chef wants me to taste. It is beyond flattering that restaurants want me to try their best stuff, but it is a constant battle (waged with smiles and gratitude) to keep the amount of food on the table manageable. The places that know me best (and there’s over a hundred of them in Vegas by now), will honor my wishes to keep (my meal) to a few things only if I firmly insist from the moment I approach the hostess stand. Even then, they’ll sneak in few “specials” in on me….for which I am always grateful because the specials are usually the best thing on any menu.

Pro Tip: Always eat seasonally. Look for the specials and newest things on the menu — they’re the ones the chefs are most interested in you trying, and the ones they’re taking the most care in cooking.

Pro Tip: After you’ve looked at the menu, ask a question or two about a dish. Try to make this question intelligent and not obnoxious. Asking your free range chicken’s name and whether he was fed non-GMO organic feed makes you look like a picayune little putz. Asking your waiter whether the chicken or the fish is more popular makes you sound like someone who’s looking for the best the kitchen has to offer. Asking the waiter what he/she prefers turns them into an ally. Once you get a meaningful (albeit brief) conversation going with your waiter, you’re halfway to maximizing your meal.

Let’s take NoMad for instance. I am not that acquainted with NoMad and have made a conscious effort not to do too much research into the restaurant’s vibe or reputation before I go there. (I did the same thing when Carbone and Mr. Chow opened.) I don’t want to have a lot of preconceived notions before I try the food. The main restaurant doesn’t open for another ten days, but I have been to the NoMad Bar twice just to get a feel for what they’re doing.

The Bar’s menu lists six large dishes and ten small ones. It’s full of boring standards like blistered peppers, tacos, salmon and ceviche, so I see it as being either 1) an incredibly boring restaurant; or 2) trying to tweak these old hat items into sublimity.  So what do I order?  The hot dog (named after the chef – always a smart move), a mozz salad, the dry-aged burger, tacos, ceviche, hummus (which I generally hate), and fried chicken. Why do I order such boring things? To see if the superstar chef Daniel Humm can (figuratively) give me a hummer with such standard list of dishes. Does he succeed? Yes with half of them, especially the burger and hot dog. (I still hate all hummus….even if someone named Humm is dishing it up.)

Pro Tip: When you see a boring menu crafted by a top-ranked chef, stick with the standards, and ALWAYS skip the salmon and heave the hummus. Not even Joël Robuchon (god rest his soul), could make hummus interesting.

There are many in Las Vegas restaurants where I’ve dined multiple times, sometimes anonymously, sometimes not (e.g. Strip House, Cleo, SW Steakhouse, Kabuto, Border Grill, Rao’s, Carson Kitchen and a host of others… ). When I’m there, I’m looking for either a tried and true favorite (the goose fat potatoes at Strip House; lemon chicken at Rao’s; Kerry Simon’s cheeseburger at CK), or to see if things have gone up or down since my last visit. Here I look for changes in the menu and go with them (if they exist). If they don’t, I stick with the basics and see how the execution is going. Restaurants like these run on pretty firm templates (if it ain’t broke, don’t fix it), so you rarely see a lot of creativity in the menus.

Pro Tip: Most restaurants tell you right up front what they’re good at. If you see a letterbox anywhere on the menu that says: “Try our world famous fried chicken,” don’t get the lasagna fer chrissakes. If mariachi music is in the air, it’s a fair bet the tacos are better than the linguine con vongole. In more sophisticated joints, the things at the top of any menu list (appetizers, mains, desserts) are usually the biggest sellers, so judge accordingly.  (This isn’t always true, but it’s a good rule of thumb.)

Pro Tip: In restaurants that have doing the same thing for a long time (steakhouses, Italian, French bistros, diners, etc.) always ask if there’s something on or off the menu that you “just shouldn’t miss.” It’s really the easiest question of all and can be asked anywhere from a Taco Bell to a Joël Robuchon.

And by “Asian Restaurants” I mean any eatery where you’re completely, or almost completely, flummoxed by the food. Here, things get more challenging.

The better the Asian restaurant is (and by “better” I mean more authentic), the more likely they are to look at you as some round-eyed interloper who’s going to be more trouble than you’re worth. That’s why you’re likely to get the gringo treatment and asked if you’d like the sweet and sour pork. As challenging as it may be, try to let the staff know you’re there for their specialties, not to eat like a white person. Korean joints (and increasingly more Chinese/Vietnamese/Japanese ones), make things easy by having picture menus. This makes things painless….right up until you point to a big steaming bowl of yukegaejang only to be told “you no like.”

I really don’t think they’re afraid of you not liking it as much as they are of you not paying for it. (Understandable!) Nevertheless….persevere! RESIST MIGHTILY! Rub your stomach! Lick your chops! Tell them you love it even if you don’t know what the fuck it is. Then, when it shows up, eat the goddam thing with a smile on your face. (Okay, if you hate it, eat a few slurps and then ask for it to be packaged to-go because you’re in a rush. The Food Gal and I have used this dodge dozens of times. (IT WORKS!)  They smile, you smile, everyone smiles! You pay the bill with a grin and then toss the offending stew in the nearest trash can. Then you make plans to return in a week or so to try something else that you may or may not like.

Pro Tip:  Become a regular. Go to the same place multiple times in relatively brief period of time — be it a sushi bar or a pho parlor. On your first visit, they may look at you sideways when you go off the reservation and start asking for the skewered chicken hearts, but the second time they see you, they’ll be happy as a clam in jogaetang you’re back again. By visit #3 you will start gaining their trust. That’s when the friendly owner might come by and suggest something you’ve never heard of and couldn’t pronounce if your life depended on it. If you like it, great! Add it to your repertoire. And if you hate it, refer to the previous paragraph.

Okay, Troy. Now that you’ve seen the inner workings of a critic’s mind, ordering-wise. let’s get practical. Look at the following menu and tell me what you see: 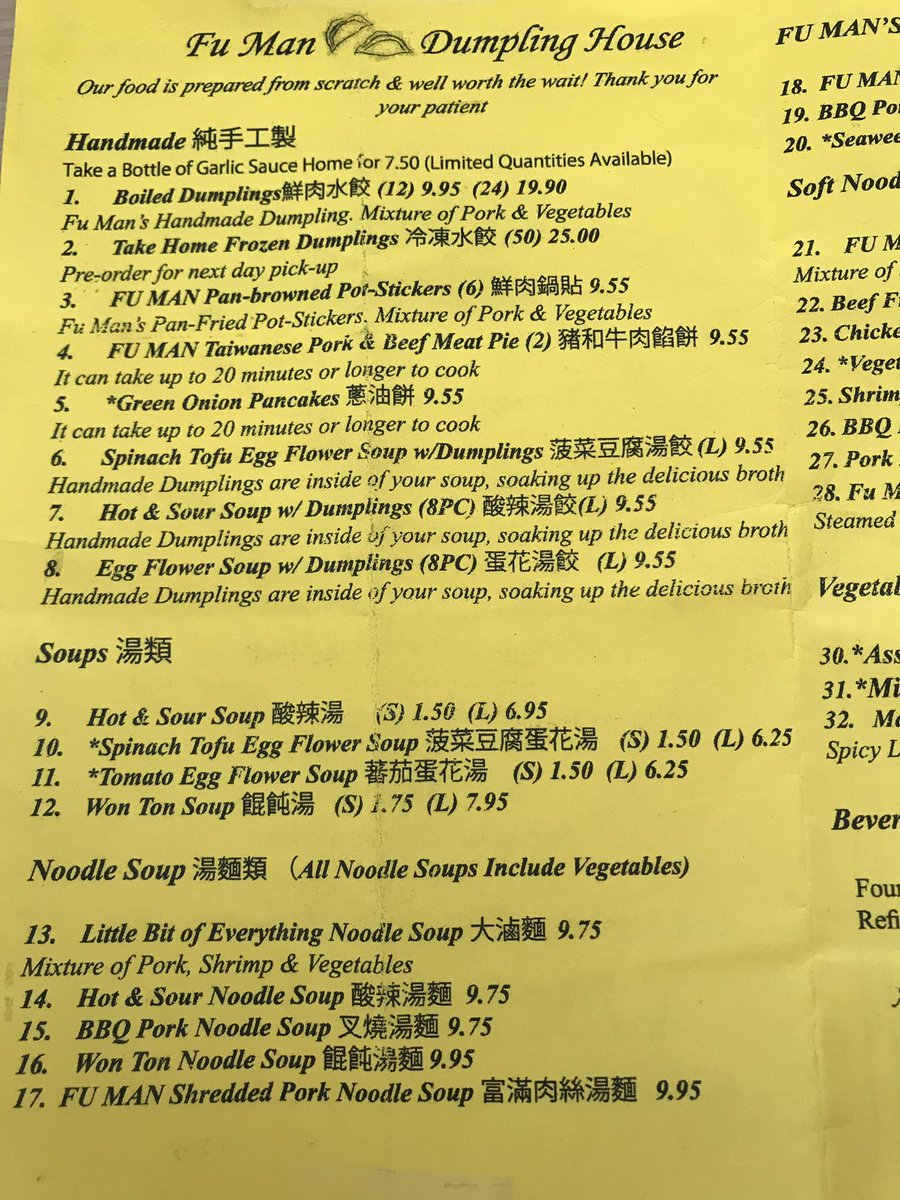 Got it? Now go get it, Troy. Those dumplings I mean.