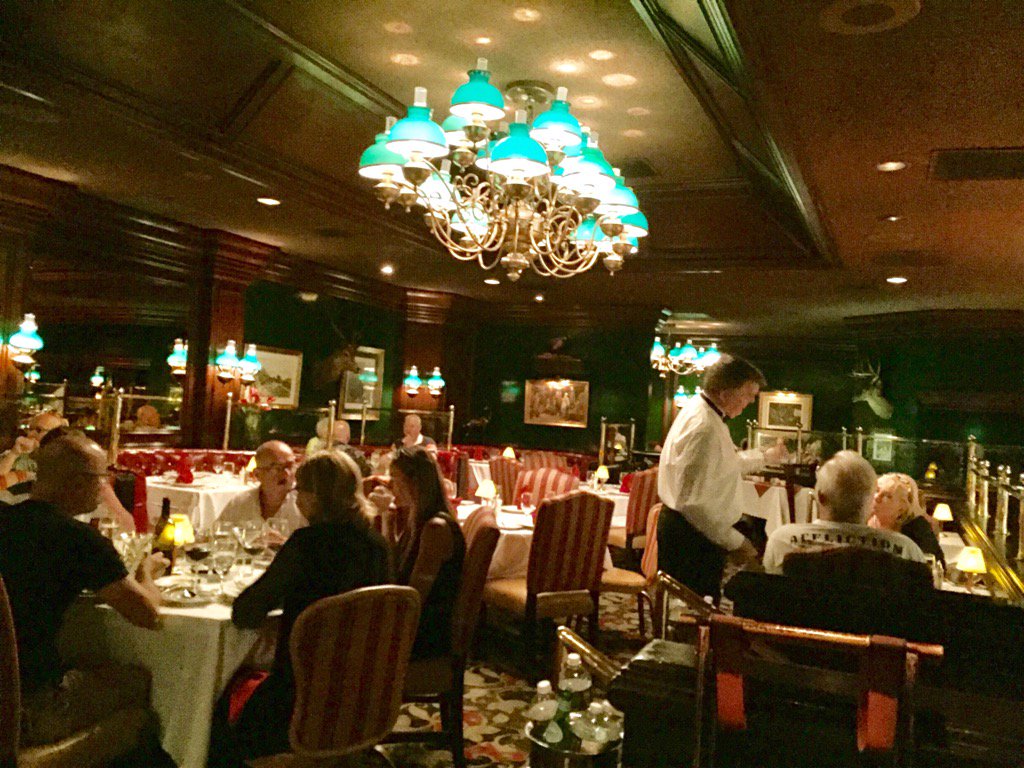 You’ve gotta hand it to THE Steakhouse at Circus Circus. It’s been around since 1983 and it still looks and feels the same way it did when I first walked through its manly-musky-meaty facade thirty-three years ago.

Truth be told, I had been avoiding going there ever since I finished my roundup of vintage Vegas dining spots a month or so ago. So depressed was I from hauling my ass from one sad, tired, tourist trap of a meal after another (over the past year) that I couldn’t handle another “Vintage Vegas” disappointment. And I sure as hell didn’t want to write another word about another regretful experience, much less chew on shoe leather and tepid memories.

But memories are a powerful thing. And I remembered the sweet whiff of mesquite smoke that had perfumed my last (very good) steak here seven years ago. And the room — a thick, dark, paneled-and-padded homage to days of old — always held a lot of appeal. It had always been a time warp of sorts, but unlike the faded, shopworn tackiness of the Golden Steer, perhaps it hadn’t gone to seed.

Service as I recalled, had always been top notch as well — with a crackerjack waitstaff that looked proud to be there, rather than just going through the motions.

With all these things in mind, I braved the environs of Circus Circus — overrun with families and reeking of bargain-basement desperation — and found the familiar sight of that heavy, wood-paneled entryway: 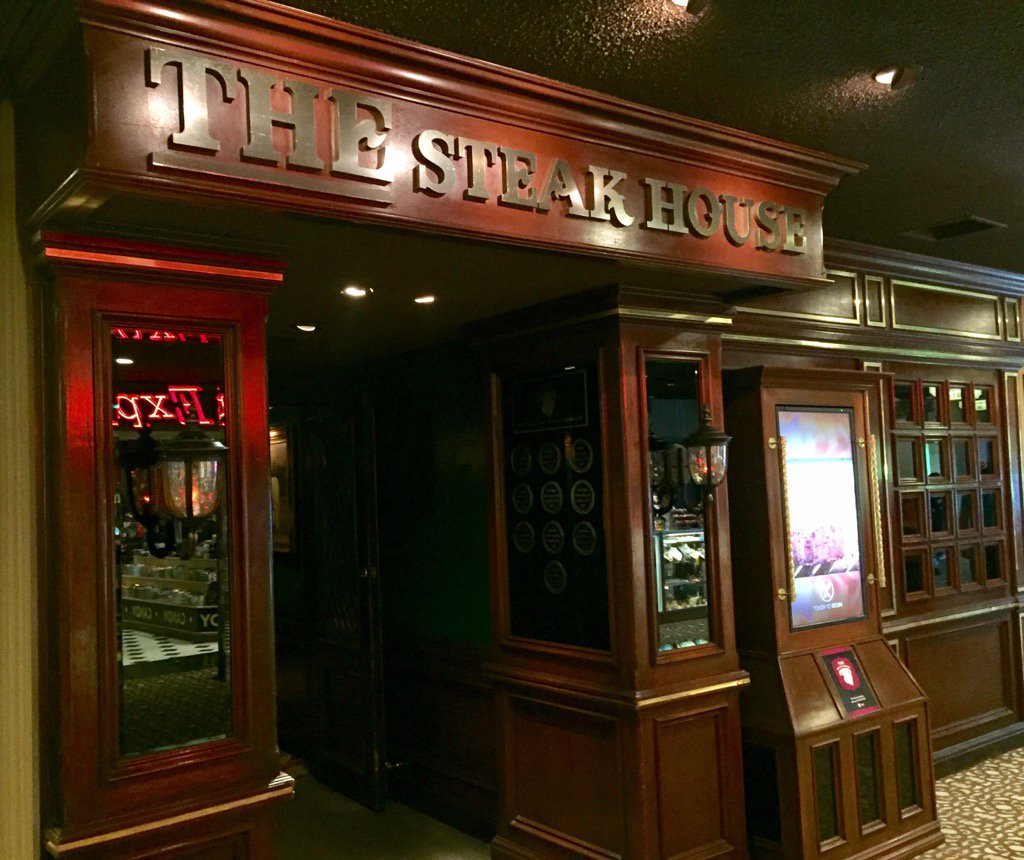 One of the joys of eating here is the incongruity of it all. Everywhere you look there are fanny-packers and families —  none of whom look like they can afford a Vegas vacation — and smack dab in the middle of it all is a plush steakhouse that would be right at home in mid-town Manhattan.

The prices are rather Manhattan-esque too, which only adds to your sense of victual vertigo. $61 is a lot for a porterhouse, getting right up there into Carnevino territory, but this one is properly aged, even if it was cut a bit thin and cooked a bit much:

To be fair, it comes with a potato (how retro!), and some very good vegetables, or an extremely good black bean soup — that soup comes with a jigger of sherry, just as it should. But what really set off the meal for us was the pitch perfect wedge of lettuce with bacon and blue cheese: 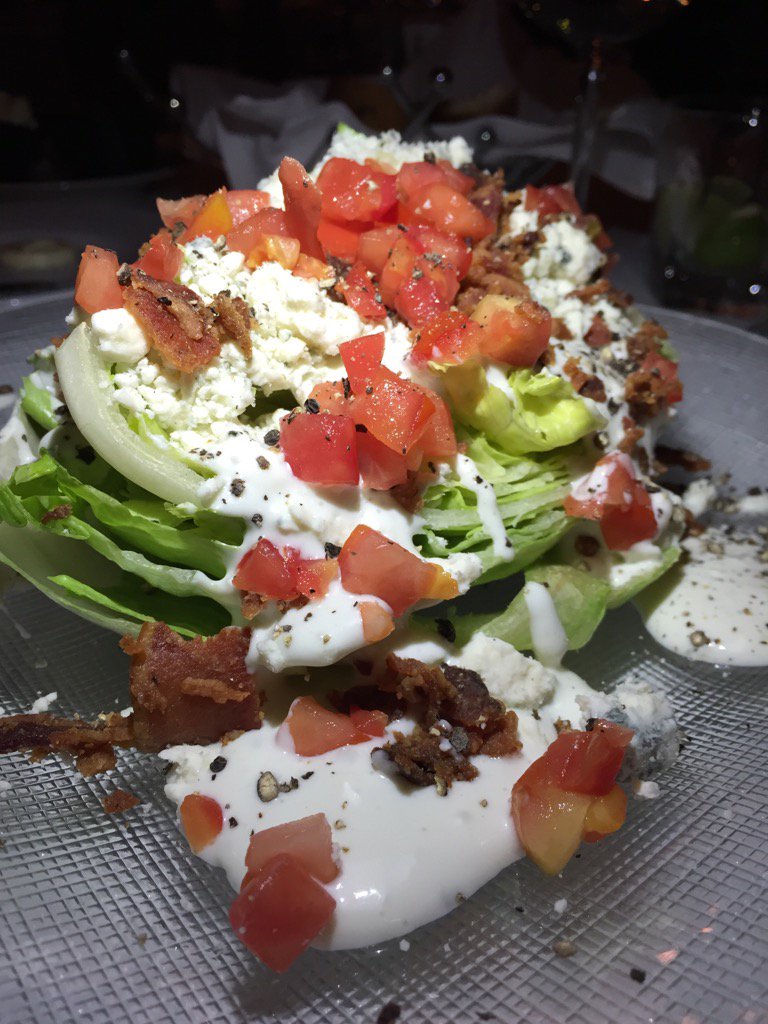 ….and the gorgeous pile of fresh spinach with just the right sort of hot and sour dressing: 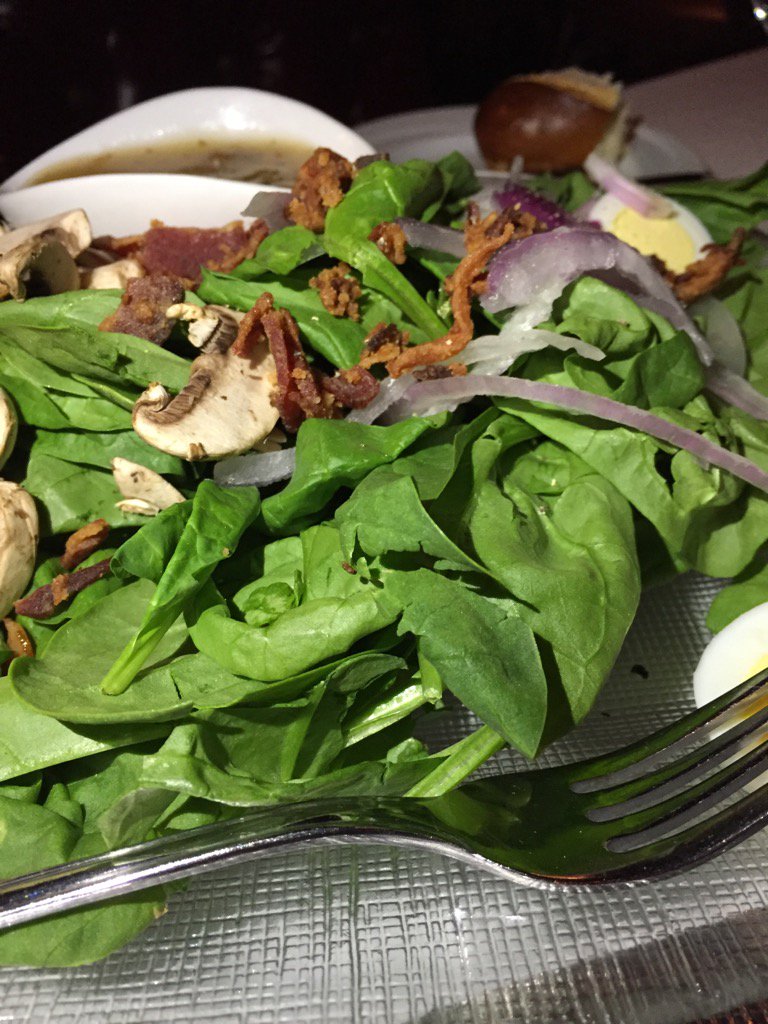 We were also nuts about some big, beefy(?) shrimp that came with their own, warmed-over-a-candle garlic butter, and the a top-notch bread basket. The service is top shelf as well, full of old pros who know what they’re doing and make everyone feel at home.

About the only things not to like about THE Steakhouse are the by-the-numbers desserts and a very limited wine list. It’s far from the “best steakhouse in town” (that it advertises itself to be), but on the whole, it succeeds where too many old warhorses fail. And even after all these years, it still feels like a blast from the past in all the best ways. It is the steakhouse that the Golden Steer wishes it could be. 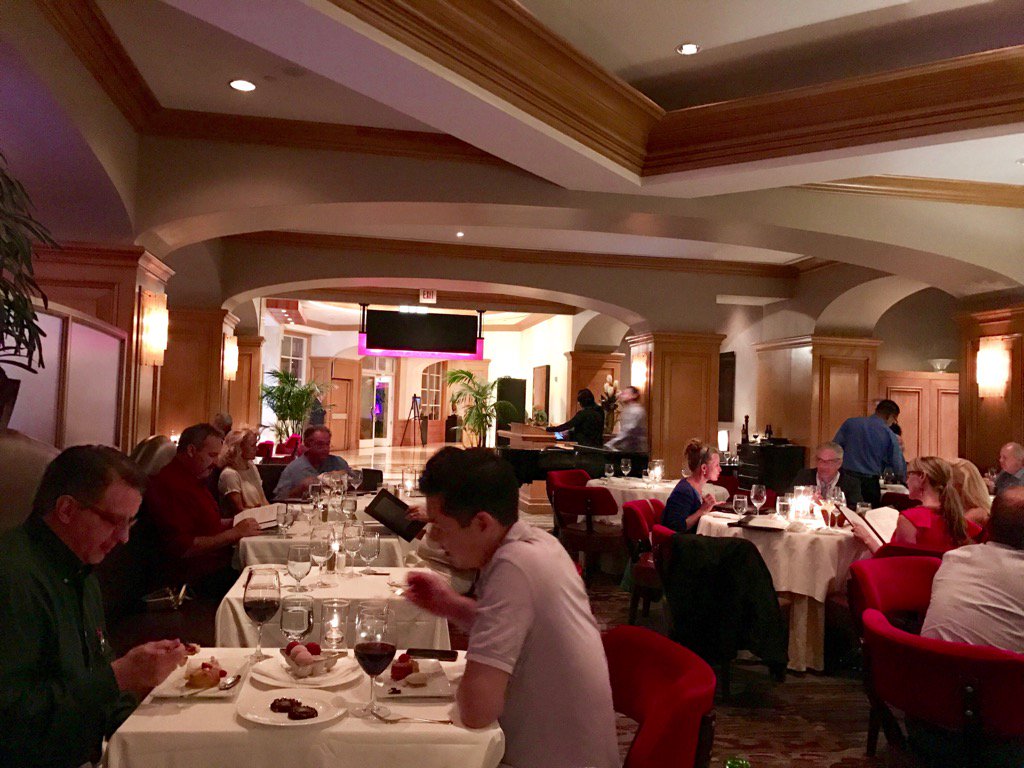 It was fun eating at THE Steakhouse, in part because no one recognized us.  We had avoided Charlie Palmer STEAK for years precisely because we always get recognized there and were tired of holding our tongue about how pedestrian it was.

If you recall, CP Steak was the steakhouse that Anthony Bourdain’s (now soon-to-be-ex) wife called “the worst steak she had ever eaten” four years ago, sparking a tempest in a Twitter teapot between me and Mr. “Fuck Nuts.” Good times.

Truth be told, we weren’t surprised to discover, when the dust cleared, that Bourdain’s terrible meal had occurred here. Of all the steakhouses in Vegas, it had been under-performing for a decade. Of all our celebrity chef steakhouses, it consistently ran dead last, and was not even in the same league as CUT, Carnevino, Prime et al.

What was holding it back? Tough to say. Complacency might have had something to do with it. As the main dinner restaurant at the tony Four Seasons Hotel, it could be assured of hitting its numbers, no matter how uninspiring the decor or boring the food. And, as a steakhouse in a steakhouse town, all it had to do is keep a bunch of big hitter California cabs on its list to keep the fat cat, middle American conventioneers swilling…and swearing it was the best damn steakhouse they’d ever been to.

Even at its worst, CP Steak would’ve still been the best damn steakhouse in dozens of American cities. But this is Las Vegas — home to the greatest beef emporiums in the country outside of the Big Apple — and the bar is set pretty friggin’ high. So, how could the estimable Charlie Palmer — one of America’s greatest chefs — get his meat market back in the ballgame? After sixteen years of running on cruise control?

Well, a facelift was a good place to start. (See picture above) Gone is the beige on beige interior. Chairs are brighter and the mood (and the lighting) is lighter. ELV ain’t no arch-EE-teck, but he can tell when thangs have been spruced up to a fare thee well. And indeed they have, and indeed this place now looks like a top-notch beef emporium, not a forlorn hotel dining room.

Elevating Master Sommelier Steve Geddes as Director of Operations was a plus, as was giving Executive Chef Tom Griese license to upgrade the menu. Neither is brand new to the operation, but along with the remodel, they’ve brought some caché back to the wine and food. Everything seems snappier and happier about the joint, right down to the platings that no longer look like they got lost on their way to Morton’s.

One dinner for two people is just scratching the surface, but this was the first time in years we found ourselves excited by the meal and stunned by the salad:

We opted for the dry-aged strip (with a little Kagoshima A-5 thrown in for good measure) and both cuts were the equal of anything in town. The basil ravioli with guanciale and chanterelles was no slouch either, and would’ve been right at home at B&B Ristorante. It, along with that superb spinach salad, had me and the Food Gal® fighting for the last bite.

But what really floated our boat (as it was clogging our arteries) was the duo of foie gras:

A dish that tasted as good as it looked and was au courant without being over-done. It reminded us of the food that made Charlie Palmer famous over 25 years ago: confident, precise and bold. French technique given American sass and style. “Very Charlie Palmer,” I thought to myself when it arrived. Very Charlie Palmer indeed.

THE STEAKHOUSE AT CIRCUS CIRCUS

In the Circus Circus Hotel and Casino

In the Four Seasons Hotel