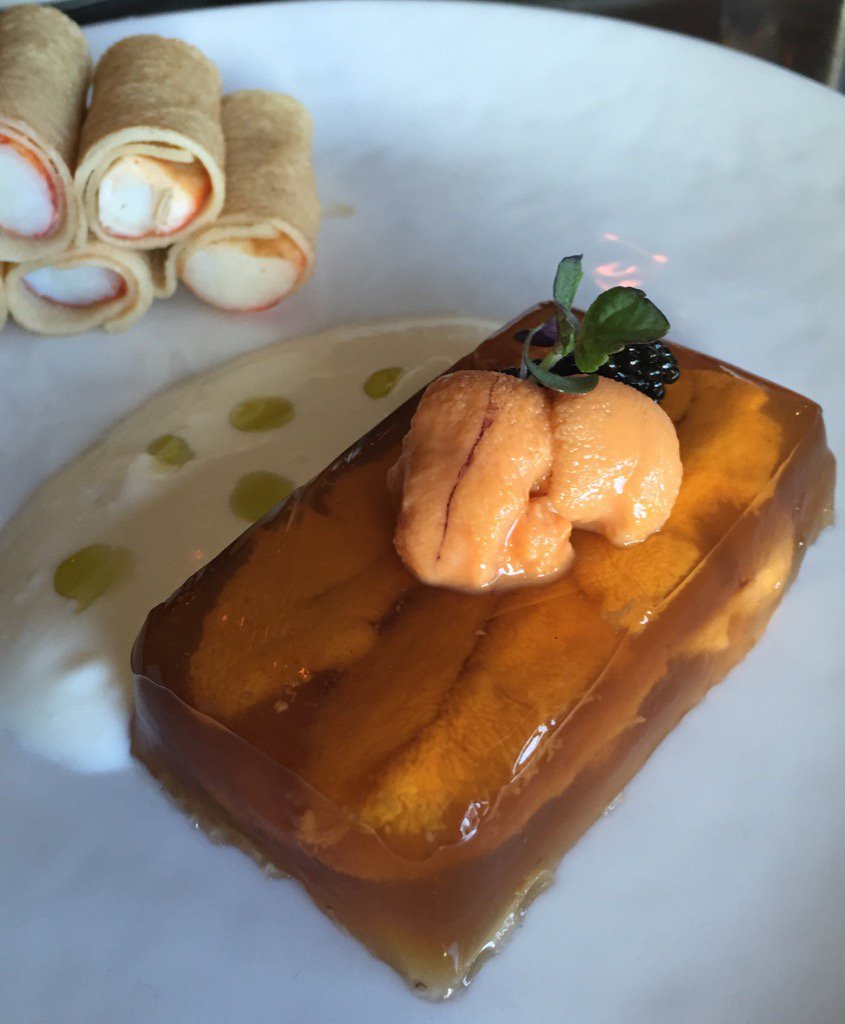 Depending on who you talk to, the season for uni (sea urchins) is either in June and March, or August, September and October.

Which means  the correct time to eat these porcupines of the sea is either when the weather is hot, or cool, or hot and about to get cool.

All we know is we like to eat these gonads (yes, you are eating the testicles of a sea urchin) whenever they’re swollen (mating season!) and when they taste of the sweet, briny sea — not of a muddy, brackish tidal pool.

We also know we love them whenever Ramir DeCastro is whipping them into shape at Yonaka.

And when he decides to encase them in a dashi gelée, and serve it with a piquant calamansi creme fraiche — accompanied by little bundles of Alaskan king crab (wrapped in uni crepes)  —  you know you have about the most ingenious little surf & surf & surf jelly plate on the planet.

About everything DeCastro does floats our boat, but these were something special…and a good measure of just how sophisticated tastes have gotten out in the ‘burbs.

In this last of our 3-part series, we examine another nouveau sushi-sashimi enterprise, and find one that hews closer to the spirit of true sushi/sashimi than you might expect from a restaurant associated with a nightclub. Click here and here to read Parts One and Deux.

Yellowtail in the Bellagio is another creation from The Light Group – nightclub impresarios who now run six food and beverage outlets in that hotel alone – along with several others around town. Like the Wolfgang Puck Fine Dining Group, it runs a tight ship in all of its outposts, and rarely puts forth food that feels commercialized or by-the-numbers. Make no mistake, like Sushi Samba, this is a corporate food factory, designed and planned to the nines; calculated at every turn to appeal to the zeitgeist of how modern America eats. Also like Sushi Samba, it’s next door to a nightclub, so many of its customers are of that ilk.