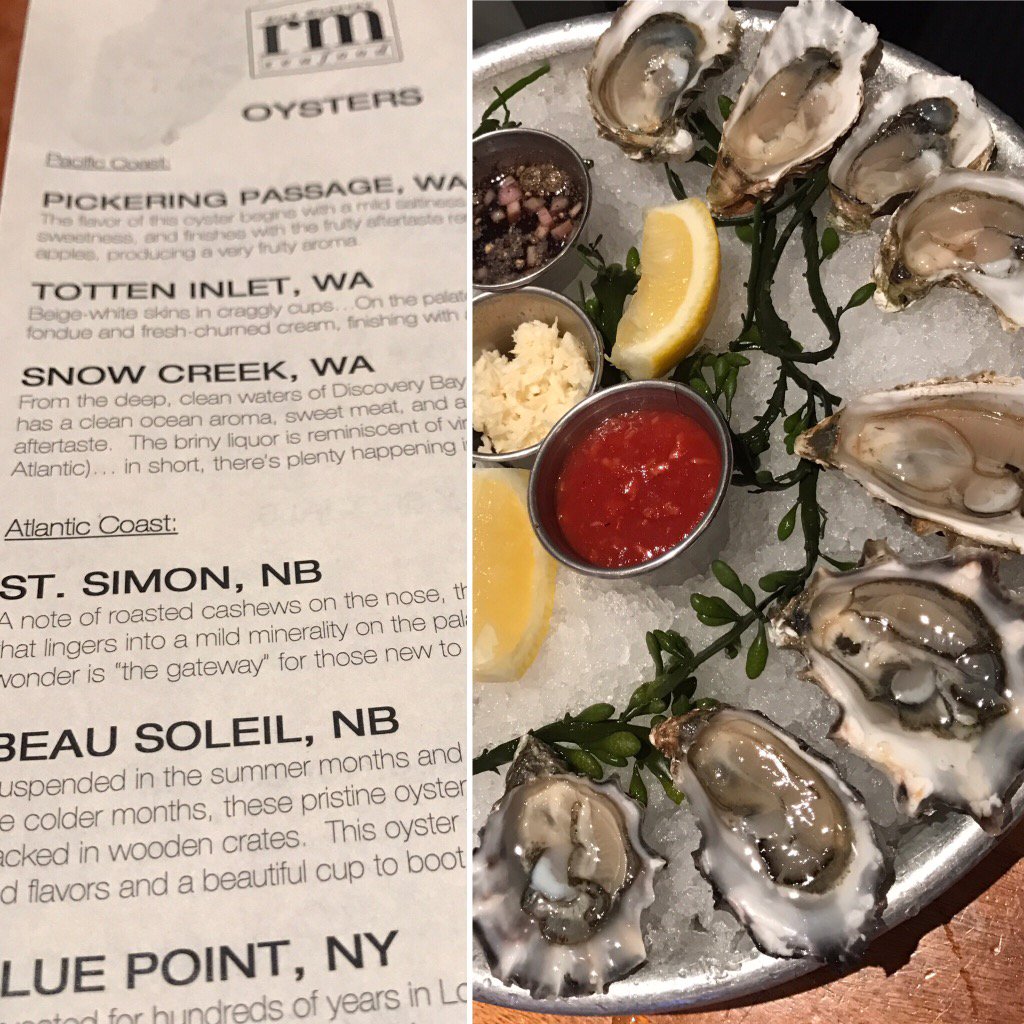 (These mollusks left us shell-shocked)

The best thing about the meal was the waitress.

She was tall, and none too young, and spoke with a middle European accent. But she was also fast and funny and not too friendly. When you needed something, it appeared quickly, and when you needed her, she always seemed to show up a moment before the thought occurred to you.

Would that the food had measured up to the service.

Why had we come? Why, for the oysters, of course! (See above)

Eighteen of them. A dozen mixed from the Pacific Northwest and half-dozen Bluepoints, just for comparison.

What showed up were eighteen blands that barely tasted of bivalve.

Seventy bucks of Crassostrea gigas bivalve to be exact. Tasting of nothing but old, over-chilled, mollusks.

See those fancy descriptions beside each of the varieties in the picture?  Taste-tempting indeed they were, with promises of deep, clean brininess and top notes of fondue, sweet cream and cucumber.

Know what showed up? None of the above. Just eighteen slimy balls of stale seafood that were indistinguishable from each other. We at ELV know not from where those taste descriptors came from, but dollars to doughnuts it wasn’t from anyone associated with the restaurant.

Here’s an idea: If you’re going to use florid language to describe your food, perhaps someone in the restaurant should taste something sometime to make sure the menu matches the merchandise.

Someone should also taste the faux butter here, it having the texture, taste and tensile strength of whipped air.

The biscuits and muffins are fresh baked and addictively good, but what good is that if you’re spreading them with something that really believes it is not butter?

Placing these disappointments behind us, we soldiered on through the rest of the meal, “soldiering on” being the appropriate verb for having to dig through a dry, stringy crab cake, and having to use a hand grenade to soften up the hard-as-a-rock lardons that accompanied a fortress-like, inedible endive salad: 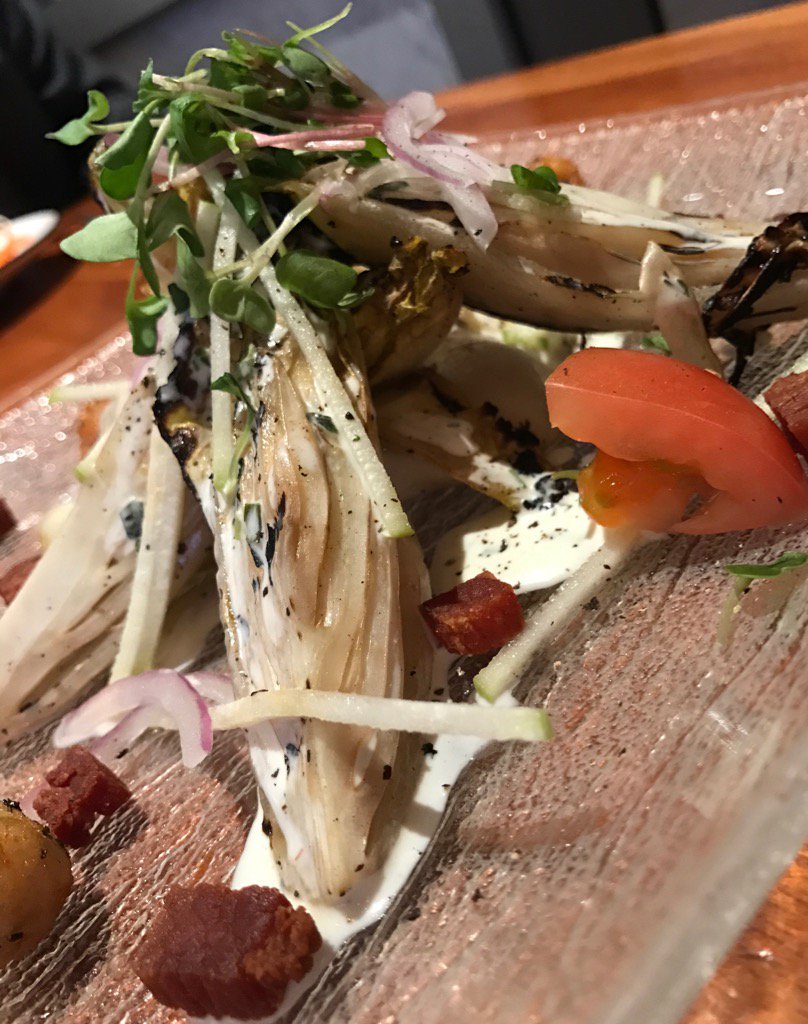 On the plus side, the tomatoes tasted like exactly what you’d expect February tomatoes to taste like, which is too say, hard, mealy and nothing at all.

Here’s an idea #2: If you’re going to serve raw endive, at least learn to dress it properly, and bring a bayonet to the table for the guests to use against it.

The meal was redeemed somewhat by a beautiful cioppino: 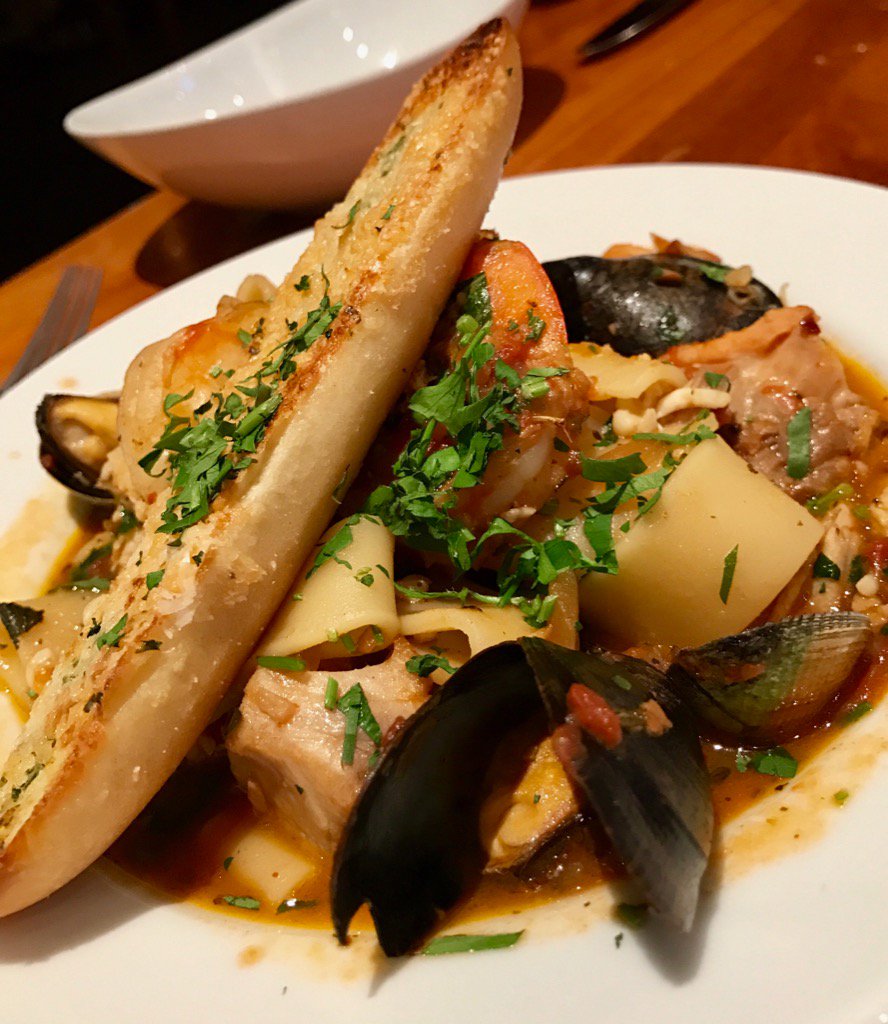 …it being full of chunks of well-chosen seafood, and dense, delicious noodles, in a piquant, rich broth. As good as it was (and it was tremendous), we were so shell-shocked by our first four courses that the breach of confidence in this kitchen could not be repaired.

We don’t know what Rick Moonen is up to these days, but from the look of things, he’s not overseeing the cooking in the restaurant that bears his name.

From the taste of things, I doubt anybody is.

Which is a pity.

Almost as pitiful as those oysters, butter, crab cake and salad.

P.S. Some of you will no doubt notice that RM Seafood is included in our Top 50 of EATING LAS VEGAS – The 50 Essential Restaurants 2017. You might also notice that it was written about in the book by my co-authors, not me. Which was the reason for my visit last week — to see if it warrants such status in future editions. I think you can guess the answer.

What is a world renowned chef to do when the dining out public seems to be turning its collective back on the type of food experience he has spent his life perfecting?

He may ask himself: How do I work this?

But get here, Rick Moonen did.

END_OF_DOCUMENT_TOKEN_TO_BE_REPLACED

Do you enjoy a tasty libation on occasion?