(Ed. note: People are always asking me” “How did you become a food critic?” Here is the answer.)

Food writer John Mariani once said there are 3 kinds of restaurant critics: “The slobs, the snobs and the oh goodie goodies.”

The slobs are professional writers who either get thrown into, or decide to write about food sometime in mid-career. Being writers by trade, their qualifications for the gig (when they start out) usually consists of being able to write a cogent paragraph and knowing what they like to eat. Ask any editor and they will tell you they prefer a real writer who wants to become a food critic, to a passionate foodie who wants to (try to) become a writer. Getting real writers to write about real restaurants is usually a lot easier than getting them into a collared shirt.

Mariani properly pegged me as a “oh goodie goodie” type of critic years ago. For the longest time, I ate everything in sight and was pleased as punch that Las Vegas was taking its place on the world’s gastronomic stage. Somewhere over the past decade, I shed my omnivorous obsessions and replaced them with unabashed epicurean snobbery, and therein lies the tale.

John Anthony Curtas was practically raised in American restaurants. As a preteen in the 1960s, I circumnavigated the United States with my family, eating in the best restaurants in town from Miami to Seattle, New York to New Orleans. My  parents were hardly “to the menu born,” but both had a healthy appreciation for good food, and wanted their children (me, two sisters and a brother) to experience the best of eating out. Neither parent was a gourmet; we never had wine or liquor in our house, and seafood was as foreign to our table as chopsticks. But what Mom and Dad loved was going out to a restaurant — dressing us all up and making a night of it. To them, dining out was about the experience of leaving the confines of home and seeking the thrill of being served good food in a fabulous place where they waited on you hand and foot. Wherever we traveled, they always sought out the best restaurant in town and the best table in the house —  the better to experience the theater of great dining.

As a young adult I started cooking more out of poverty than choice. My older sister gave me a subscription to Bon Appetit magazine in 1978 that I ate up, literally and figuratively. An early girlfriend and the second Mrs. John A. Curtas were both foodies before there was such a term, and they indulged my then passion for Chinese food. By 1980 I had pretty much cooked my way through The Chinese Menu Cookbook, (Joanne Hush and Peter Wong, Holt Rinehart Winston, 1976), and was seduced by the Szechuan food craze that was all the rage by then. (Yes, there was a Szechuan food craze in those prehistoric times, and I have the cookbooks to prove it.)

My ex-wife was even so kind as to compile a list of Chinese grocery stores for me, when we first moved to Vegas in 1981, so I could continue working my way through the various regional cuisines. Until around 1990, if you had asked me what my favorite food in the world was, I would’ve answered the strong, salty, sour and hot foods of the Sichuan and Hunan provinces of China. (Then and now, the textural nuances of Cantonese cooking, and the folderol of  Mandarin banquets, remain more of a curiosity than a keen pursuit.)

Wedged into all of this was a move back east in the mid-1980s — where I lived mere 50 miles from mid-town Manhattan. It was a seminal time for American food, and I consumed the New York restaurant scene wholesale, as Danny Meyer, Drew Nieporent, Larry Forgione, et al developed a food-centric, wine-friendly, customer-casual template that put baby-boomers at ease with sophistication without pretense.

In 1990, after five years of eating in places like Odeon, the Coach House, Four Seasons, Peter Luger, and the Union Square Cafe (not to mention enjoying the best seafood in America every summer on Nantucket), I moved back to Las Vegas and surveyed the edible landscape. It was not a pretty sight. The best restaurants in town were two chain steakhouses: Ruth’s Chris and Morton’s. Every hotel had five eateries: a coffee shop, a buffet, a steakhouse, and Italian, and a (not-very) “gourmet room” serving “continental cuisine” from some unnamed continent. All of them facing the keno pit, or so it seemed. Marcel Taylor — the Caesars Palace dealer who brought Ruth’s Chris to town in 1989 — told me the philosophy of every hotel back then was to capture the casino customer and never let them out the front door. As he put it, “…they figured we have every place anyone could ever want to eat in right here, what more could they (the tourists) want?”

But want they did, and when Ruth’s Chris realized its Vegas outpost was outselling all its other franchises, the word quickly spread to upscale chains and chefs everywhere that Las Vegas was the place to be. Late 1992 brought the opening of Spago, and soon thereafter, Mark Miller, Charlie Trotter and Emeril Lagasse planted their flags in the MGM. Suddenly, we had a real restaurant scene.

The only thing lacking was a serious critic to write about it. Hard to believe 23 years later, but in 1994, the only person covering restaurants in Las Vegas was the mother-in-law of a certain newspaper owner. She belonged to the “My friend Mabel had the chicken soup and she thought it was a bit salty” school of food writing, and was avidly followed every week by what few society matrons there were in town.

So, I stepped into the breach. It took a year of hounding media outlets, but finally, in October, 1995,  I got a shot at being the Nevada Public Radio food critic — a position I pretty much invented for myself and a gig that lasted until 2011. Did I know anything about radio? Absolutely not. But I knew a helluva lot about food, and could put two sentences together, and looked great in a button-down shirt. As I like to say: In the land of the blind, the one-eyed man is king. For five years I was the only game in town when it came to critiquing serious restaurants in a serious way. It would not be until 2001 that our main newspaper hired a full-time food writer, and in keeping with tradition, they made sure she was of the “My friend Edna had the steak and she thought it was a little chewy” school of food writing.

The Nineties brought multiple trips to France and Italy, and writing for all sorts of magazines and guidebooks. It was then that I honed both my palate and my writing. It took a decade plus, but only after all those meals, travel and reviews did I begin to appreciate my subject matter and my relationship to it. Food is the most intimate relationship we will ever have, and allowing strangers to cook it for us is an oddly perverse ritual which many struggle to understand. (It’s the reason so many people have a chip on their shoulder when they eat out.) Giving over our bodies, our health, and our mouths to persons unknown, and paying them for the privilege of feeding all three, is surrendering an inordinate amount of power to a stranger — and paying them money for the privilege of taking advantage of you. It is this curious dynamic that continues to fascinate me, as much as anything that I shove in my piehole.

As for the food, then and now the ingredient-driven Italians and technique-driven French have always fascinated my palate. French food — more than any other on earth — is driven by the extraction, concentration and layering of flavors. Italian cuisine — in all of its regional glories — celebrates the simplicity of the raw material, while a Frenchman tries to make it taste even more like itself. The yin and yang of these philosophies still hold me in their thrall, and, of course, they both make the best wine on the planet (sorry Spain and California).

Enter Japan. Japanese food is about the quest for perfection, and in many ways, eating Japanese food in America and Japan has refined my tastes even further and eliminated my helter-skelter insatiability. No longer am I a galloping gourmand, happily ingesting everything in sight. Now, in my sixties, I seek the unobtainable grail of the quintessential. Like a Japanese chef, I take interest in the details of the divine.  A wasted meal, or even an ingredient, puts me in a bad mood. I have eaten so much of everything that I now simply want the best of anything — be it in a street taco, a glass of wine, or a piece of fish.

I am no longer an “oh, goodie goodie,” and I am certainly not a slob. It is said that to become a gourmet, like becoming a first class horseman, you have to start young. I am an epicure and I started very young. But there are many more steps before me, and it is this mountain that I continue to climb.

Food is life itself, the rest is parsley. – Alan Richman

ELV note: We recently engaged in an e-mail chat with one of our loyal readers and thought you, another loyal reader, might be interested in the discussion.

My spouse and I love your Web site. It seems like the only place a dedicated foodie can go to get honest, infallible, unimpeachable, and incisive analysis of the Vegas food scene. Since we don’t live in your town (and only come to visit about once a year), we depend on you to tell us where to best spend our dining out dollars. With that in mind, we have a trip upcoming over the holidays and wanted to know your thoughts about Carbone…

We have many thoughts about Carbone.

So you’ve been? (By “you” of course, I’m referring to “you” in the imperial, imperious third person, as “you” are wont to do…)

Yes, WE have been there once, last week.

I heard it was expensive…

Is it worth it?

END_OF_DOCUMENT_TOKEN_TO_BE_REPLACED 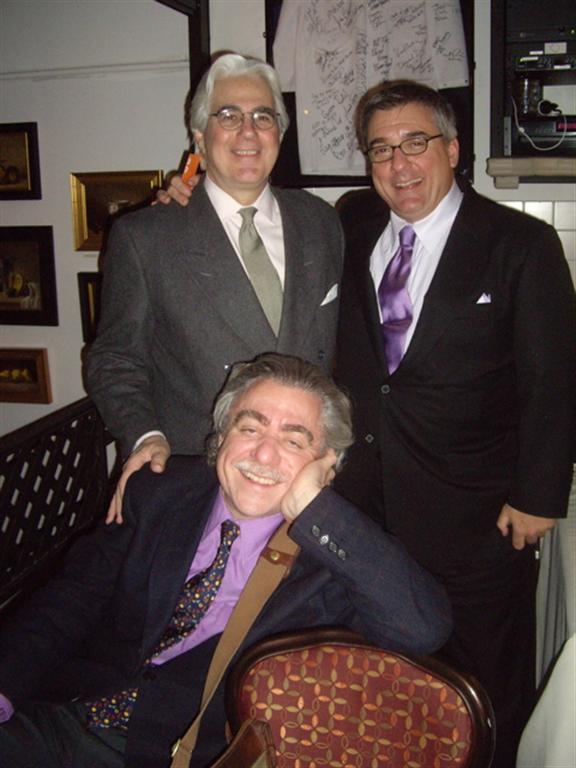 These two fellows (John Mariani and Alan Richman) have forgotten more about food than I will ever know. I am proud to call each of them my friend.