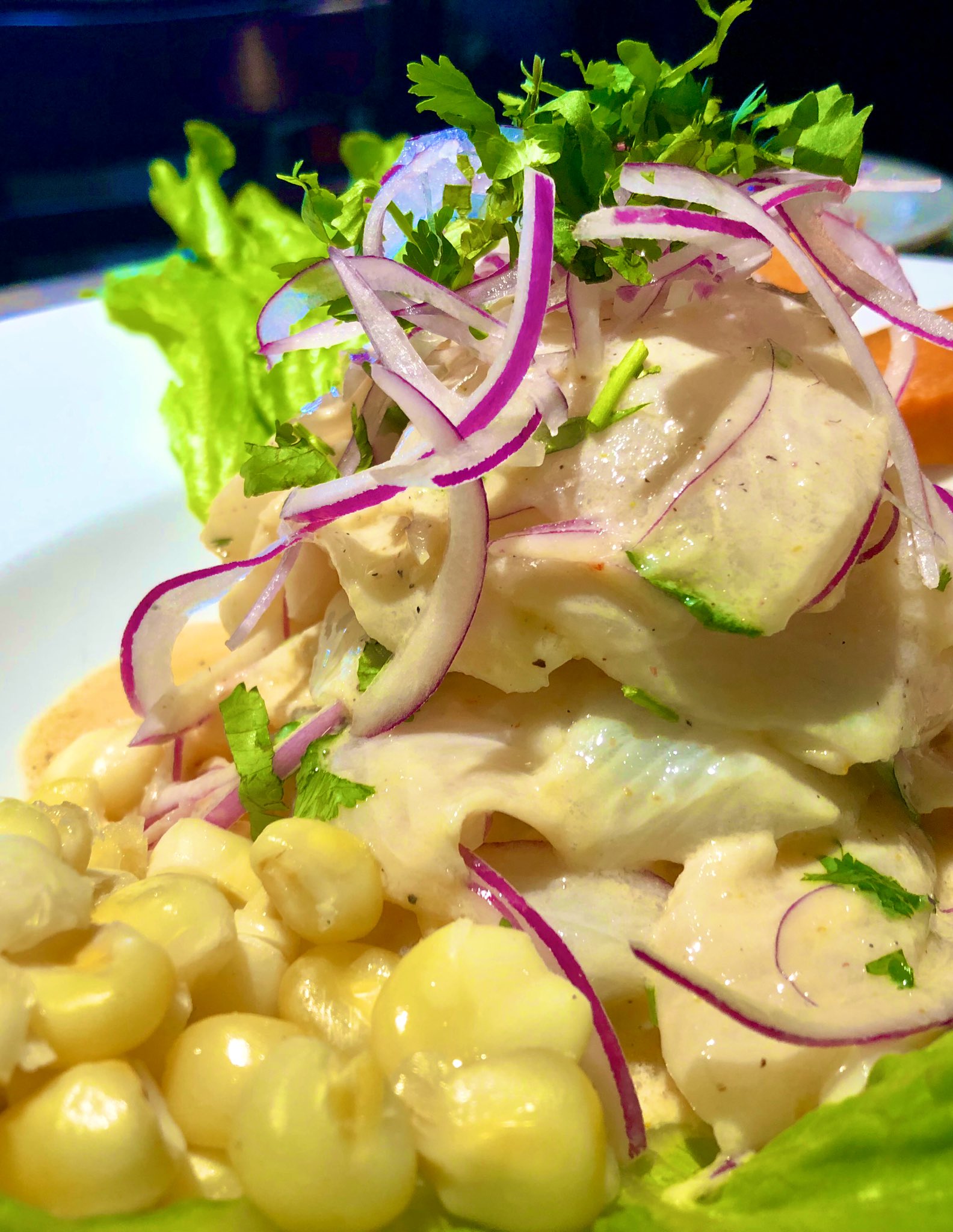 Tried it again and again and have always wondered what all the shoutin’s about.

Peruvian food is like Cuban to me: it always sounds more attractive in the abstract than in the eating.

Starch on starch on starch. Thick, raggedy-cut fish tossed with lime and onions. Huge chunks of corn (see above). Giant clunky stir-fries full of negligible appeal and imprecise seasoning. Peruvian food is starchier than a priest’s collar, with all the subtlety of a hominy-coated anvil.

It’s like Peruvians took the best of Asian techniques and combined them with a Brazilian’s sense of restraint, which is to say no restraint at all.

Remember when Peru was going to be the next big culinary thing? Well, that lasted right up until a few journalists actually ate the food. After one meal they couldn’t waddle back to their keyboards, so there went the revolution.

But let’s be fair: the food of Peru is tasty. Even if you don’t like eating Guinea pigs. 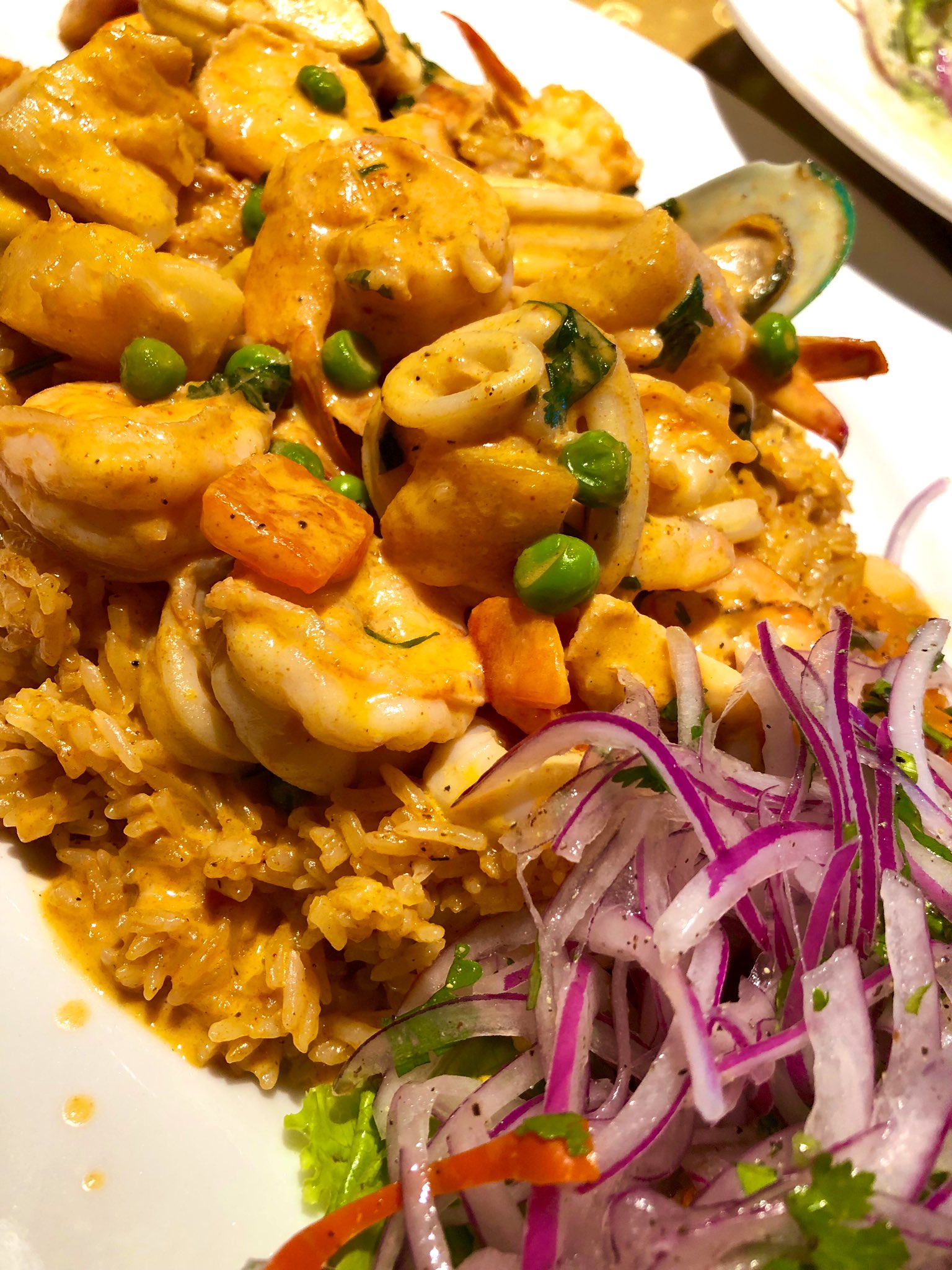 And it’s filling. And it is the birthplace of all sorts of fruits and vegetables ( e.g. potatoes, avocados, peppers) the world now takes for granted.

And Peruvians are wonderful people. I’ve never had anything less than stellar, friendly, patient service in a Peruvian restaurant…as the staff tries patiently to explain to me why they’re serving potatoes on the same plate with huge, starchy chunks of corn with rice and bread.

Let us also not forget that Las Vegas’s best artisanal bakery — Bon Breads — was started by über-Peruvian Carlos Pereira, and a more passionate, amiable and talented baker you will never meet.

Carlos is always threatening to take me to Peru, and one of these days I’m going to take him up on it. Because I’m sure that Peruvian food, in its native habitat, is much more refined, and much less reliant on bludgeoning your taste buds into submission with carbohydrates.

In the meantime, though, I’m writing this for all of you who actually like Peruvian food, and maybe have yet to discover Lima Limon — a tucked-away bastion of the Andes quite popular with ex-pat Incas and other favorite sons of Machu Picchu. 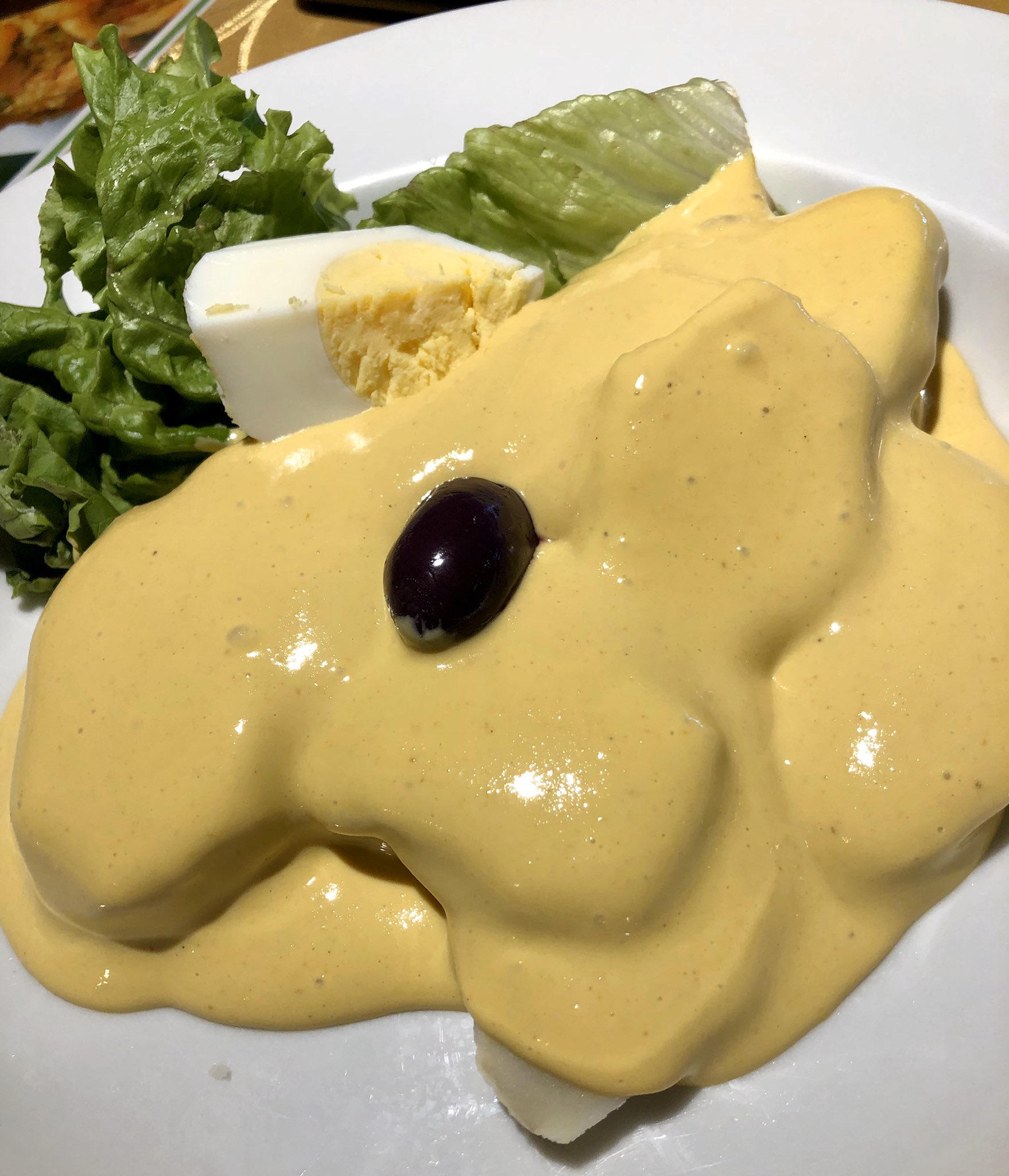 To be honest, I actually enjoyed my meal at LL. The Papa a la huancaina (above) were the perfect salve for a growling stomach — tender. waxy potatoes were coated with a slightly spicy cheese sauce that glistened like a yellow silk blanket. If things had stopped there, or with a few bites of tart ceviche, I would’ve left a happy man.

But I was here on an invitation, you see. From a fan. Someone who really likes Peruvian food. He’s also twice my size and can park a whole order of lomo saltado like he’s nibbling on a Triscuit.

So, off to the races we were. The aforementioned ceviche was followed by a seafood (mainly shrimp) paella that made up for in rib-sticking what it lacked in delicacy. To its credit, at least it wasn’t smothered in cheese. Peruvians love to smother their seafood with cheese. In this case, the cheese was incorporated into the rice. 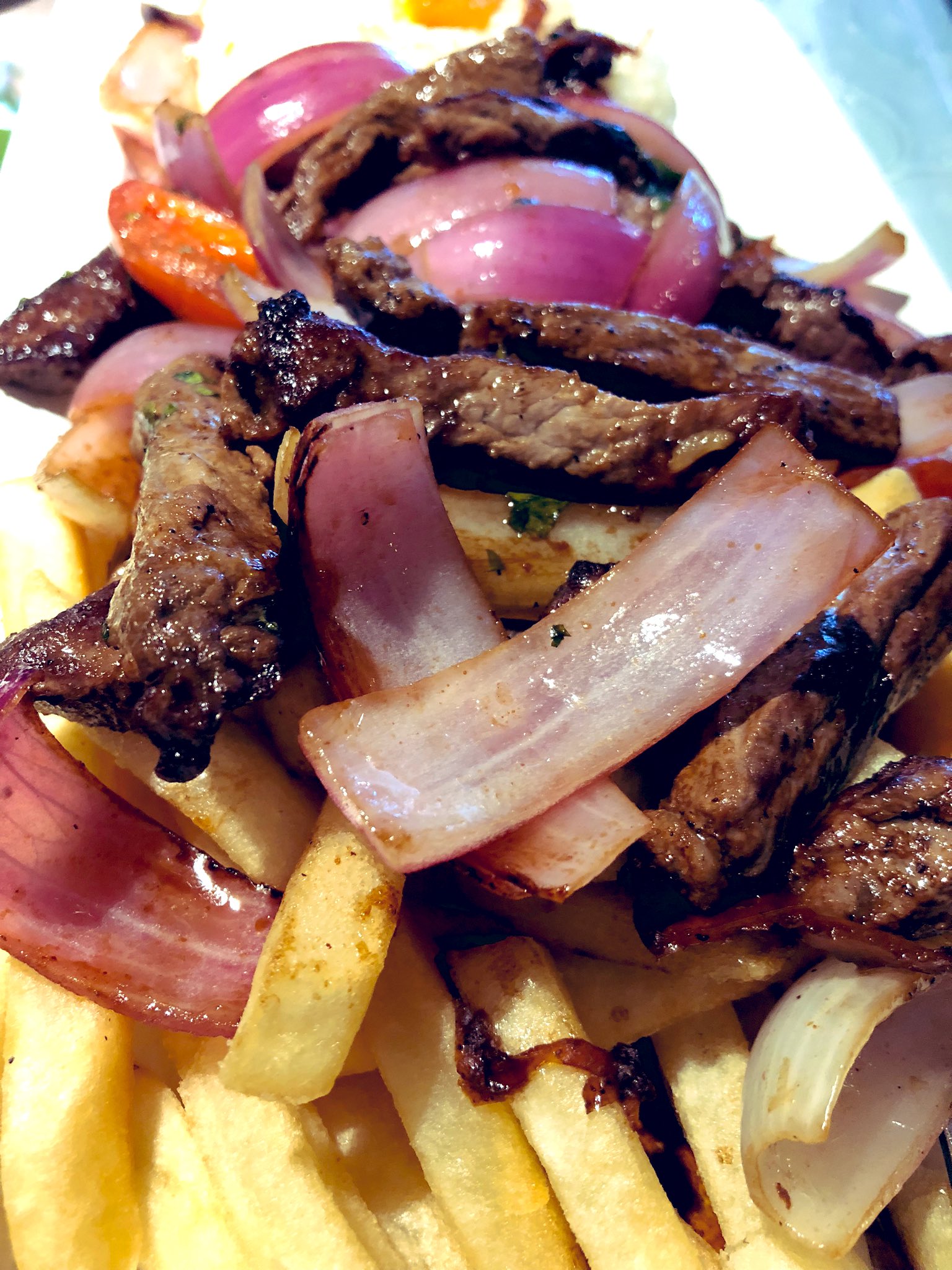 To be fair, the rice was damn tasty, as were the fries. The meat was of decent quality and obviously cooked by a pro, and even the shrimps showed themselves to best effect. To conclude, you will eat well at Lima Limon, even if the cuisine sometimes feels thick, clumsy and artless. 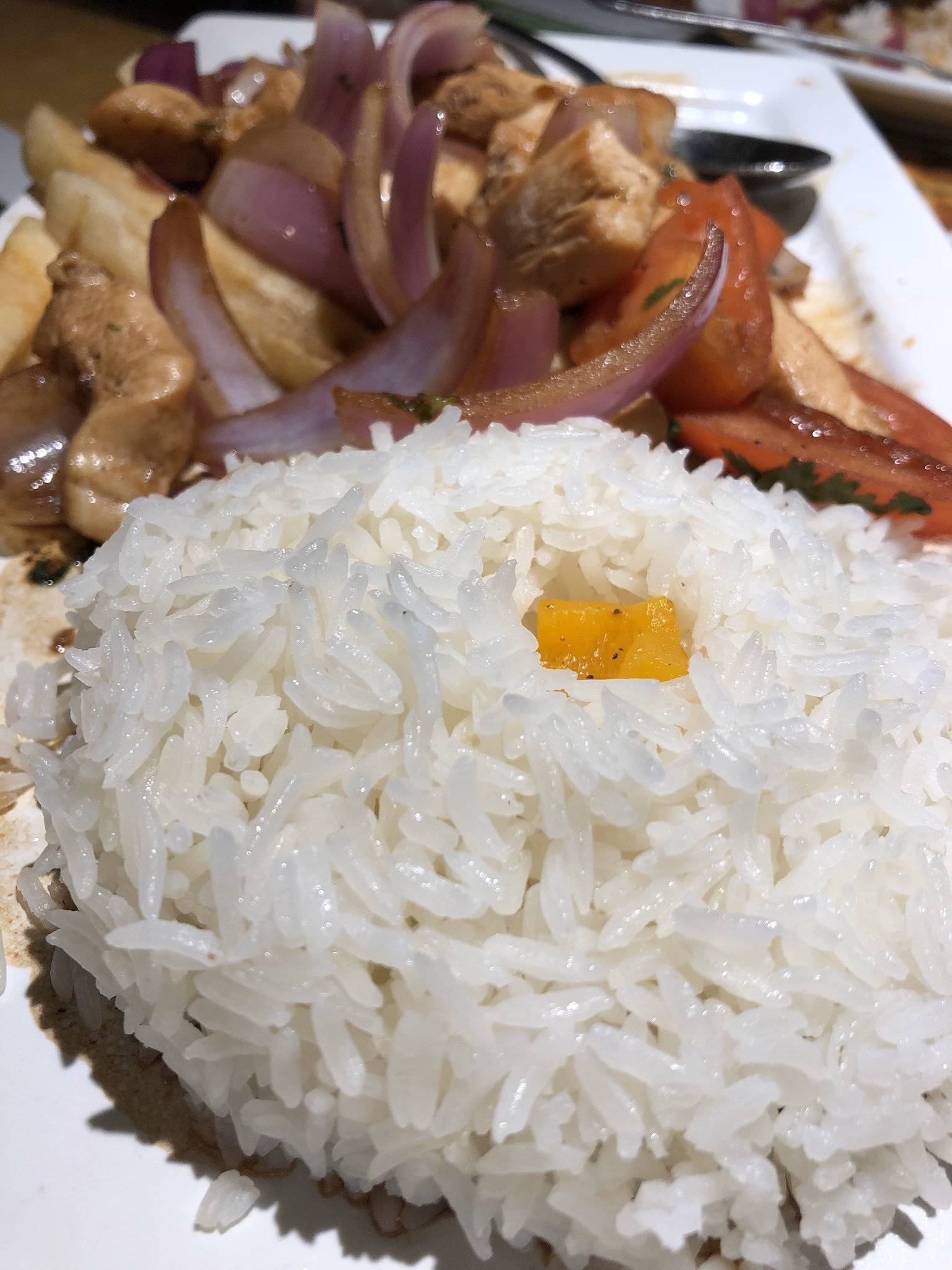 (Starchier than a priest’s collar)

On the plus side, those potatoes alone are worth a trip, and it beats the pants off of Cuban food.

And you won’t be hungry for at least three days.

Our feast for three that could’ve fed eight came to $80.