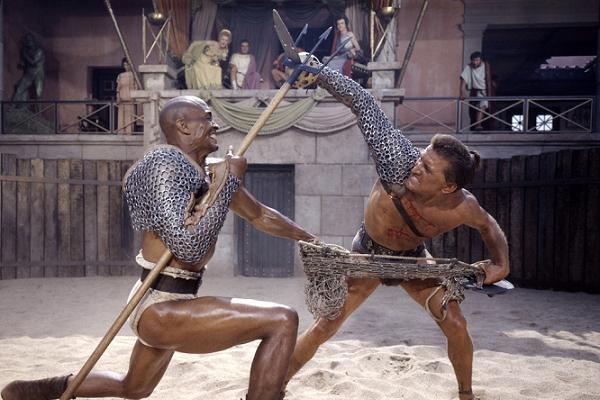 “You’re a pretty good guy, for a girl.” – Robert Mitchum in Angel Face

The Guy Movie is an endangered species.

I trace the beginning of the end to Sharon Stone, Uma Thurman, and Sigourney Weaver. At least the latter two were tall, as is Charlize Theron, who looks like she could kick my ass, but I digress.

From there, it was a slippery slope to Meg Ryan as a Medal of Honor military pilot, and jeebus frackin’ christie, 5′ 3″ Scarlett Johansson as a trained killer.

About the same time came a passel of minuscule Chinese actresses, who could beat up anybody (on the ground or in the air) with their fancy karate moves, and various photographic trickery. All this let to Rhonda Rousey — who is at least trained as a fighter (at 130 pounds) — but who is to acting what Meryl Streep is to kickboxing.

Now, all the girls want in on the action: Jennifer Lawrence, Kate Fucking Beckinsale? Zoe Saldana? All of them playing 120 lb. waifs who have no trouble disabling five NFL linebackers with nothing but their fists.

Someone in Hollywood apparently decided a decade ago that we have to sell young women on the idea of being “fierce.”

Girls can do anything guys can do, the thinking goes (no, they can’t), so we have to give them protagonists who are just like them, but who can jump off buildings, mow down trained marksmen with single-shot pistols, and knock out a cadre of highly-trained assassins with their size 4 frames, small hands and tiny feet.

I have nothing against Scarlett…or her Johanssons, but enough is enough.

This is Title VII run amok. Equality is one thing, but unreality is a crime against nature.

Then again, selling Alan Ladd as a tough guy was a stretch, too.

I say it’s high time to bring back the guy movie — where men are men, and women are….nonexistent.

Yes, the guy movie: those tales of yore where groups of men (or a lone wolf) battle evil in all its forms using nothing but their ham-handed fists, guns of all sorts, and an unwavering belief that women exist mainly (if at all) as props.

There are strict rules to be observed when making a guy movie, rules that are now honored in the breach, or, even worse, by having Angelina Jolie in them.

Here are the rules of what makes a great guy movie, and like men, they’re pretty fucking simple:

Instead of these cardinal rules, we now have Unlocked, where Noomi Rapace (who looks like she could fit in my briefcase), mows down terrorists and breaks bones of men three times her size.

Women should be celebrated for their femininity, their softness and their ability to make me a proper meatloaf.

There, I said it.

THE GREATEST GUY MOVIES OF ALL TIME

Roadhouse – two men, seemingly with the only two houses in town, fight it out over who controls a honky tonk bar. Major points deduction for having a romantic sub-plot, but any movie that ends with an evil henchman’s throat being torn out — by someone with a PhD in philosophy (from New York University!) — to the twangy, melodic strains of the Jeff Healey Band, deserves a place in the pantheon.

Once Upon a Time in the West – the only female character is a good-natured whore who exists solely as an excuse for men to have a series of gunfights…which is as it should be.

The Godfather Parts I and II – has there ever been a greater movie where women were less elemental to the plot? According to the tenets of this film: women exist, 1) to make brooding men dinner in sepia-toned rooms, 2) to make you feel guilty for killing a bunch of thugs out to do the same to you, or 3) at the end of Sonny Corleone’s dick. Or, as we like to call it: Tuesday in Little Italy.

Cool Hand Luke – when the only female in the movie is depicted by her two, wet and sudsy breasts, you know you’re in guy movie heaven.

The Longest Day – when mowing down Germans was considered about the manliest thing you could do on film.

Lonesome Dove – made for TV, but still eight hours of manly man bliss. The only thing that could make LD any better would be if it had Sam Elliot in it.

Dirty Harry – would be considered quintessential but for Clint’s “The Bridges of Madison County” – a guy movie transgression from which his reputation is still trying to recover.

Any movie with Robert Mitchum or Lee Marvin in it.

A Fistful of Dollars/For a Few Dollars More/The Good, the Bad and the Ugly – they’re really just one seven hour movie-going experience of guy-movie heaven. Highlight: Clint mowing down 4….no 5 bad guys for making fun of his donkey. That, and he and Van Cleef blowing each other’s hat off with their pistols for about ten minutes.

El Mariachi – the greatest, cheapest guy movie of all time. All he wants to do is play his guitar…but what he ends up doing is killing everyone but the cameraman and the key grip.

Platoon – lots of manliness on display here in a futile cause: trying to make Charlie Sheen and Kevin Dillon look like soldiers.

The Professionals – there are two women in this movie who have something to do other than sexually service men. Thankfully, one of them gets (deservedly) shot to death in a dusty canyon and the other is Claudia Cardinale.

Red River – the homo-eroticism sub-text is strong with this one, but The Duke, John Ireland and Walter Brennan yank it back to testosterone territory whenever Monty Clift threatens to sink the plot as the skinniest, sappiest, non-macho gunfighter since Don Knotts.

Yojimbo/Throne of Blood/Seven Samurai – watching Toshiro Mifune and various Japanese actors grunt and groan their way through sword fights almost makes up for having no idea what they’re arguing about.

The Magnificent Seven – sort of the gold standard in these things. Heroism for its own sake, Mexicans both good and bad. Almost perfect but for nancy boy Horst Bucholz trying to woo a fair maiden.

Spartacus – yes, there’s an actual love story involved, but Woody Strode with a trident (see pic at top of page) compensates for it .

The Wild Bunch –  evil Mexicans so stereotypical they make the Frito Bandito look like Hamlet. Throw in dust, sweat, larceny, whores, tequila and machine guns and who needs a plot?

The Dirty Dozen – what red-blooded American male can’t watch Jim Brown sprinting through a German parking lot and throwing hand grenades down a bunch of air shafts without a tear coming to his eye?

Predator – next to sweaty, slimy makes the best guy movies, and this one has plenty of both.

Master and Commander, the Far Side of the World – try to ignore that it’s about the English navy, and that it features Russell Crowe pretending to play a violin (typical for sissy Brits, no doubt), and focus on the sweaty seamanship, cannon fire, and the delight of watching a 13 year old midshipman’s arm being amputated.

Lock Stock and Two Smoking Barrels – makes the cut even though it was directed by some pantywaist Englishman.

Reservoir Dogs – a movie with no discernible point, other than bloodshed, i.e., the perfect guy movie.

Hard Times – Bronson at his best.

No doubt I’ve missed a few, but these give you a good example of what cinema is missing these days.

What it’s also missing is great music. A lot of these pictures had iconic scores that people still remember, 60 years on. When’s the last time you hummed a tune from a movie score.

I rest my case.

Are you not entertained?

4 thoughts on “The Greatest Guy Movies of All Time”