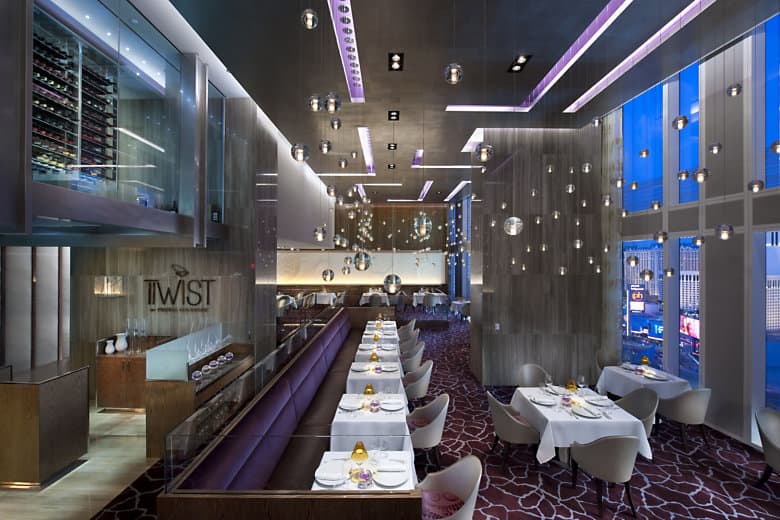 ELV note: A major metropolitan/international newspaper recently asked us to compile a list of the top fine dining destinations in Las Vegas — places that are sui generis, nonpareil, and unmatched for the finest food and drink in town. Most of these are price-is-no-object joints; all of them serve some of the best food of its kind you’ll ever find. (To balance things out, we also submitted a list of “Hidden Local’s Favorites” containing a number of places that mere mortals can afford.) Buon gusto!

‘e’ by José Andrés  (Cosmopolitan) – The toughest seat to score in town, made by e-mail reservation only, gets you one of eight “golden tickets” for a molecular ride the likes of which you won’t experience anywhere else this side of Espana. Feran Adria was Andrés’ spiritual mentor, and his influence is everywhere on the seasonal menu. In the wrong hands, this cuisine is pretentious; here it is profound.

Lotus of Siam (953 E. Sahara Ave.) – Multiple expansions haven’t dimmed the star of America’s best Thai restaurant. (So sayeth me and every other critic who’s eaten here.) Go early for dinner or late for lunch if you want to get a table, and bring a thirst for German/Austrian/French wines. Bill Chutima’s Riesling list has become almost as famous as his wife’s northern Thai cooking. Not exactly “fine dining,” but so good it deserves to be in whatever “best of” list gets drawn up for Las Vegas restaurants.

Prime  (Bellagio)  Eighteen years on, Prime still boasts one of the prettiest dining rooms in America. A revamped bar area provides more room for nibbling and sipping, and the main room blends beefiness with romance as well as anyplace in which you’ll ever enjoy a peppercorn-crusted strip steak.

Michael Mina (Bellagio) – Start with the tableside-mixed tuna tartare (everyone does), then throw caution to the wind as you order the whole lobe of foie gras. Follow that with Mina’s decadent lobster pot pie and a rack of lamb and you’ll have plenty of reasons to hit the Stairmaster once you return to your life of kale smoothies and denuded chicken.

Twist by Pierre Gagnaire (Mandarin Oriental) – Twist isn’t for everyone. Like all restaurants in the Gagnaire oeuvre, it takes a decidedly adventuresome tack towards most of its menu. Here they take creative seasonality seriously, making boredom an impossibility. Get a tasting menu, buckle your seatbelt and enjoy the ride. Or get a steak and bathe in one of the best Bordelaise sauces in the business.

Joël Robuchon (MGM) – The big daddy of big deal meal restaurants in Vegas. You’ll be surrounded by Asian high rollers, a few punters, and some Eurotrash, but none of that will matter once the food starts showing up. Intricate, high-flying French are the watchwords here, but it’s best to have a second mortgage on hand before you approach the wine list.

Sage (Aria) – High ceilings and theatrical décor set the stage for some of Las Vegas’ most dramatic food. The seven-course tasting menu is a flat out steal at $150, but you won’t want to miss the standards on the menu – foie gras brûlée, roasted sweetbreads, kusshi oysters with peppers – either. The bar and bar menu are as stunning as the main room, and an excellent spot to drink your dinner, if that’s your thing.

L’Atelier de Joël Robuchon (MGM) – There are multiple L’Ateliers around the globe these days, but this one takes a back seat to none of them. Chef Steve Benjamin has been at the helm since it opened (in 2005) and the dishes pouring forth from his open kitchen never fail to astonish. The dizzying array of menus and a la carte options encourage abandon but demand restraint. Do what we do: just close your eyes and point. And get the sweetbreads. And the hangar steak. And the spaghetti. (ELV update: Benjamin recently left his position at L’Atelier to pursue other adventures in sunny SoCal. We have not been in since his departure, but if the Robuchon machine runs true to form, we doubt there will be a dip in the quality of the cuisine.)

Carnevino (Palazzo)– Vegas has the greatest steakhouses in the world, next to New York, and Mario Batali’s steak and wine emporium can go hoof to hoof with them any of them. Here, the beef is aged in-house, for months not days, and the “riserva” steaks call to you from the ginormous menu, as do the pastas, salads and house-made salumi. The wine list is a dream for lovers of the “killer Bs” —  Barolo, Brunello and Barbaresco. But bring your bank.

Bazaar Meat (SLS) – Calling it a meat emporium is a little unfair, since the seafood and wacky Spanish (read: molecular) creations are every bit as good as the steaks. Everyone raves about the cotton candy foie gras, but it’s the tartares (both tomato and steak), that deserve your attention first. Then it’s on to jamon croquetas, suckling pig, or whatever else suits your fancy in the Andrés repertoire…and it’s a huge repertoire.

Restaurant Guy Savoy (Caesars Palace) – When it’s on its game, one of the best restaurants in the world, with neither the pyrotechnics of Robuchon nor the in-your-face creativity of Gagnaire. What Savoy brings is gorgeous, sophisticated food that doesn’t need to pirouette on the plate to impress. The deep, refined flavors do that all by themselves. The wine list is a treasure trove, with more than a few bargains, if you’re willing to dig.

Carbone (Aria) – A New York import that arrived in the Nevada desert with its pedigree intact. Throwback dining packs them in every night, meaning: lots of table-side histrionics to go with gutsy pastas and the priciest veal parm this side of Manhattan. You’re going to hate yourself for loving this place as much as you will.

Mr. Chow (Caesars Palace) – Purists may balk, but Mr. Chow is about unabashed big-deal meal service, a luminous setting, and a sense you’re being fed by, and dining with, grownups. Get the Peking Duck and the Dressed Dungeness Crab, and enjoy this throwback in all the right ways.

Wing Lei (Wynn) – A jaw-dropping room, white-gloved service, and upscale Chinese food (at a price) that will knock your socks off. Be you a Mandarin or from Main Street, you’ll find something to love on this menu, but we’re partial to the steamed fish, hand-pulled noodles and perfect stir-fries.

Ferraro’s Italian Restaurant and Wine Bar (4480 Paradise Road) – Slightly off the Strip lies one of our best Italian restaurants, family run, and dishing up the kind of pastas and proteins that compete with anything Giada or Mario can throw at you. The Ferraro’s (who are always on the premises) had the good sense to put Francesco di Caudo in charge of the kitchen a couple of years ago, and he upgraded the food to put it on par with their world-class (Italian) wine list. Leave the gun; take the cannoli.

Yui Edomae Sushi (3460 Arville Street) – Nonpareil sushi and sashimi, edomae (Tokyo) style. Simple, direct, and sliced by the piece for an omakase meal like none other. This is purist sushi, truly Japanese, with nary a California roll in sight. The A-5 wagyu beef (grilled over binochatan charcoal), will take your breath away with its silkiness, fattiness and price.

Le Cirque (Bellagio) – A jewel of a restaurant in a jewel box of a space. The Maccionis (who own the original one in New York) have little to do with this outpost any more (other than a licensing deal with the Bellagio), but the food, wine and service remain as spot-on as when Sirio himself was kissing cheeks and badgering waiters. The food – under culinary wunderkind Wilfried Bergerhausen – has gotten more inventive and less stuffy.

Picasso (Bellagio) – Where else in the world can you walk around a restaurant and see a dozen works of the master himself? Even if you wouldn’t know a Picasso from black velvet Elvis, you’ll still be impressed by Julian Serrano’s menu that, after eighteen years, continues to get the best venison and scallops west of the Hudson. The wine list could keep you occupied for days.

Raku/Raku Sweets (5030 W. Spring Mountain Road) – Mitsuo Endo was the first chef to bring elevated, izakaya cooking to Las Vegas (in 2008), and he still does it best. Raku is for a certain kind of adventuresome food lover, but its sweet sister a few doors down serves finely crafted desserts that can be analyzed, consumed wholesale, or admired for their art.

Estiatorio Milos (Cosmopolitan) – The best fish in town, period. Also the best Greek food in town by a Peloponnesian mile. You’ll pay through the nose, but you’ll also be shouting “Opa!” with every bite. Come for the $30, three course lunch if you’re on a budget.