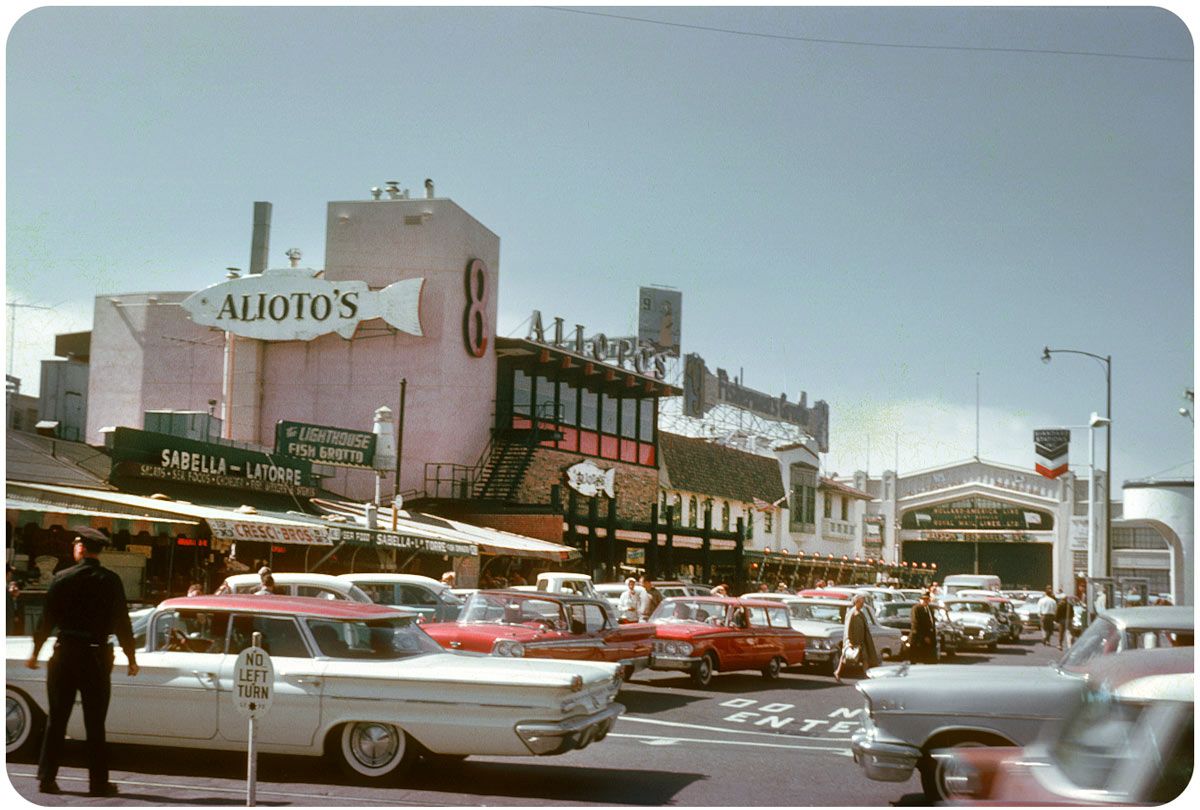 Isn’t it nice that people who prefer Los Angeles to San Francisco live there? – Herb Caen

Is there anyone who doesn’t love San Francisco?

Yes, but most of them live in Los Angeles.

Los Angelenos hate ‘Frisco because San Franciscans have spent the last 150 years looking down the state and their noses at them.

Angelenos think of their northern relatives as a bunch of cloistered snobs.

Both have a point.

I’ve spent so much time in each city that I feel a kinship with these two Californios with nothing in common. Next to New York City, they  are where most of my urban education has taken place, and after dozens of trips to both (for business and pleasure), I feel comfortable walking or driving the streets like a native. (Driving in ‘Frisco is not for the faint of heart; driving in L.A. causes afflictions still being catalogued by mental health professionals.)

(BTW: I call it ‘Frisco, especially when I’m in ‘Frisco, because San Franciscans are a bunch of insufferable elitists who hate their precious city being referred to with a slang term.)

My memories of San Fran go back to 1960, when we froze our asses off on Fisherman’s Wharf ….in July. We ate Dungeness crabs out of little paper cups and went to DiMaggio’s (when Joe DiMaggio was still a big deal) and screamed as our dad navigated the steep hills in our three-seat Ford station wagon — like the one above, only in red. It had a seat in the way, way back that pointed backwards.

With every incline, we were sure our car was going to tip over backwards. To this day, it takes a bit of trust in the laws of physics to point the nose of your sedan straight up Hyde and gun it…when the only thing(s) you can see is blue sky and the nose of your car.

Then, there was the walking, up and down Powell, Mason, and Taylor streets: trekking so angled it felt like we could touch our noses to the pavement while standing up. I have no idea how many precipitous hikes we took that first day, but I’ve taken many since, and these elevations still fascinate me. The only other city I’ve seen with such abrupt ascensions is Lausanne, Switzerland.

The Food Gal® and I will be taking off for San Francisco this morning. We’re going there for a day trip to celebrate our birthdays. (It’s a big one for her, just another in a long march towards oblivion for moi.)

It will be 12 hours of walking in the fog and rain and straining our calves and trying to touch our noses to the pavement, and no doubt freezing our asses off the whole time.

We’re going to love every minute of it. 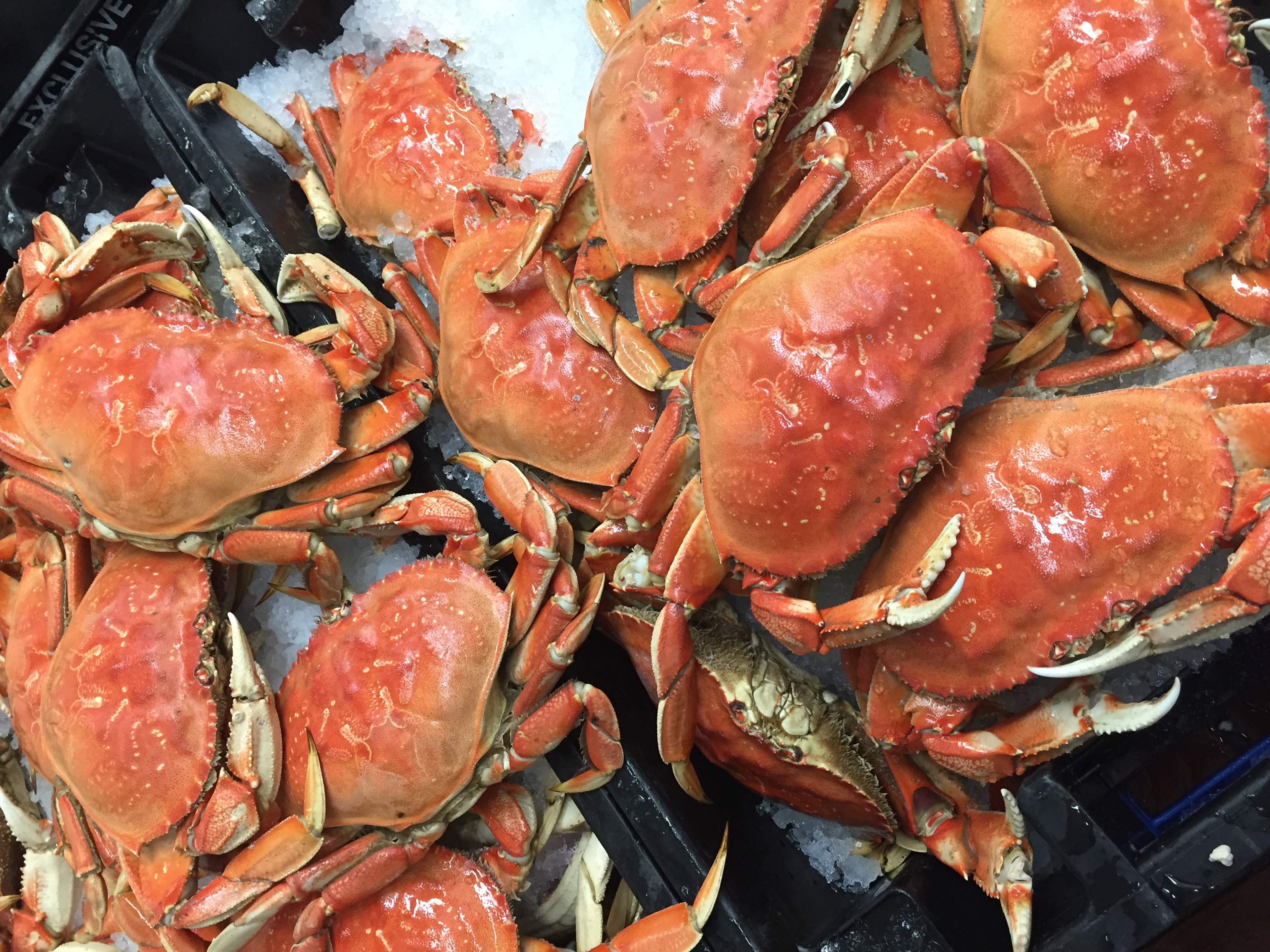 Fleur de Lys – being wined and dined by Hubert and Chantal Keller – when this place was at the top of its game – is a food memory I will never forget. Closed in 2014.

Stars – Jeremiah Tower: The Last Magnificent. What a crock of shit.

Chez Panisse – the first time (in 1983), it was a study in simplified perfection; by meal #3 (two decades later) the place bored me to death. Alice Waters is still boring me to death.

Tadich Grill – Calvin Trillin sent me here in the late 70s; I’ve been a dozen times since. “The Original Cold Day Restaurant,” serving the best sand dabs and tartare sauce on the planet.

Jack’s – best sourdough ever. The place made you feel like a Barbary Coast freebooter.

Aqua – where the world, and yours truly, first discovered a young Egyptian-American chef named Michael Mina.

Le Central – cassoulet to die for; it’s been bubbling since 1974.

Sam’s Seafood Grill – like Tadich, a classic. Get the petrale sole.

Trader Vic’s (above) – long before anyone had heard of Asian fusion, Vic Bergeron was mixing and matching his food metaphors.

Mike’s Cantonese Cuisine – back in the day, New York and San Fran were the only places in America where you could find anything approaching real Chinese food.

Masa’s – ruled the roost of San Francisco dining in the 80s and early 90s. The founding chef —  Masa Kobayashi — was murdered. I’m not sure the crime was ever solved. Julian Serrano took over the kitchen and was considered San Fran’s best chef until he was lured to Sin City by Steve Wynn in 1997. The restaurant adjoined the Vintage Court hotel. It was way better than the hotel.

Nob Hill Restaurant – the first place I ever had nouvelle cuisine. In the Mark Hopkins Hotel. Salmon with vanilla sauce anyone? Anyone?

Caffé Sport and Trattoria – loud and colorful….and apparently still in business serving food I fear I have long outgrown.

Jardinière – Traci Des Jardins blew me away, back in the day. Two lesbians (at the adjoining table) wanted me to go home with them. I was either too drunk or too sober to go along with the plan.

Boulevard – I’ve never had a bad meal here, and I’ve had lots of meals here. 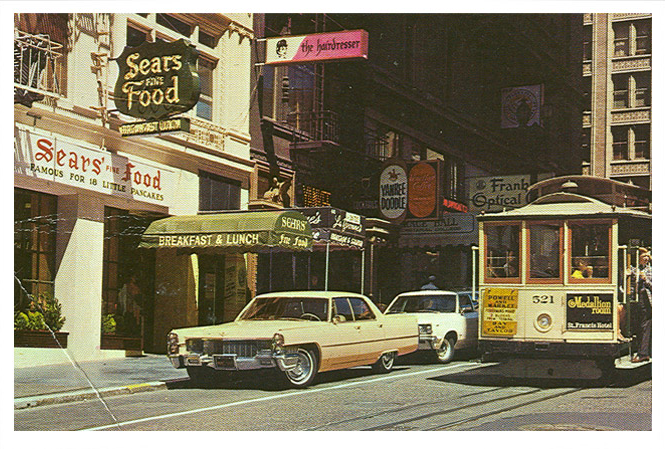 Sears Fine Food – since 1938. Then and now, flapjack heaven along Powell Street. As comfortable as an old shoe. Silver dollar pancakes never go out of style.

Pabu – Mina does Japanese! And does it extremely well.

State Bird Provisions (above) – an early acolyte of the small plates revolution.

Tartine Manufactory – good, but, like a lot of things these days, not as special as it thinks it is.

The Slanted Door – made Vietnamese food safe for white people. Which means it’s a lot more impressed with itself than it ought to be. They have threatened to come to Las Vegas. They were supposed to open 6 months ago. Yawn.

The Ferry Building – we were there when it first opened as a foodie mecca (in 2003), and have returned many times since. The last time (a couple of years ago) it was mobbed and filthy. I liked it a lot better when every tourist in the world didn’t want to be a food expert.

Swan Oyster Depot – no frills west coast seafood worth waiting in line for.

Farallon – stunning undersea fantasy decor; designed by Pat Kuleto; was there when it first opened (a client dinner if memory serves), haven’t been back since. 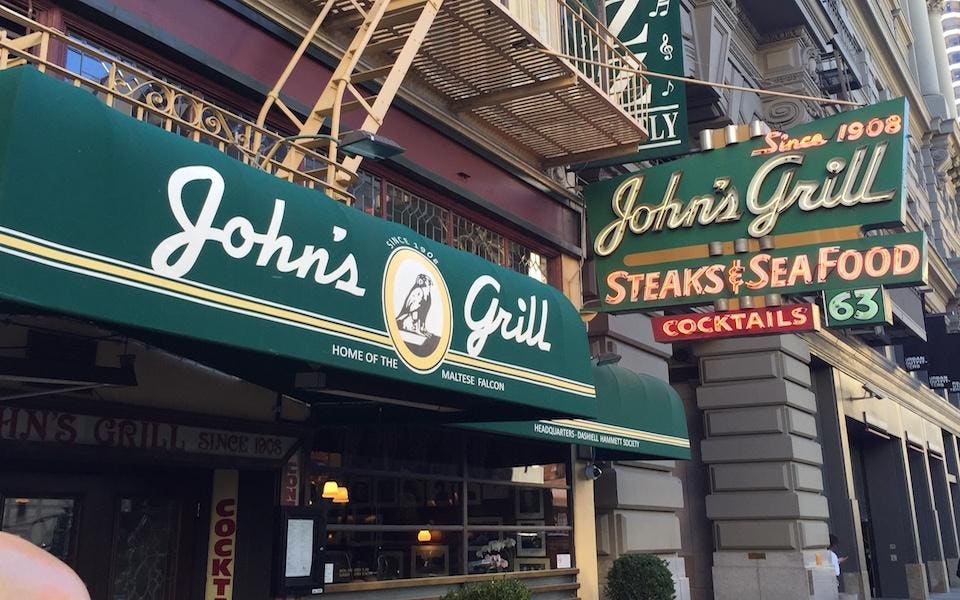 John’s Grill – when I want to feel like Humphrey Bogart in the Maltese Falcon.

The Cliff House (below) – stunning views, lots of tourists, surprisingly good food. Literally perched at the far western tip of the United States. How cool is that?

And those are just some of my faves, pulled off the top of my head, after 5 decades of eating everything in sight. There are scores of bistros, bars, destinations and dives that have faded from memory. There’s one bachelor party in the early 80s I wish I didn’t remember, and birthday parties, a wedding or two, and multiple business meals forever suspended in the recesses of my taste memories, waiting to be revived as soon as I see those beautiful hills.

I love San Francisco the way some people love Las Vegas: as a playground, full of sights and sounds and tastes and smells no other city in America can match.

I love all of those taste memories, but what endears San Francisco to me most is what set it apart from other western cities a hundred years ago, and what sets it apart today: it is civilized. Existing in a very special sphere of its own sophistication that other western cities can only dream of.

‘Frisco may have a world of problems, and be filled with snobs and terrifying streets, but San Franciscans know how to live.

And they know how to eat. 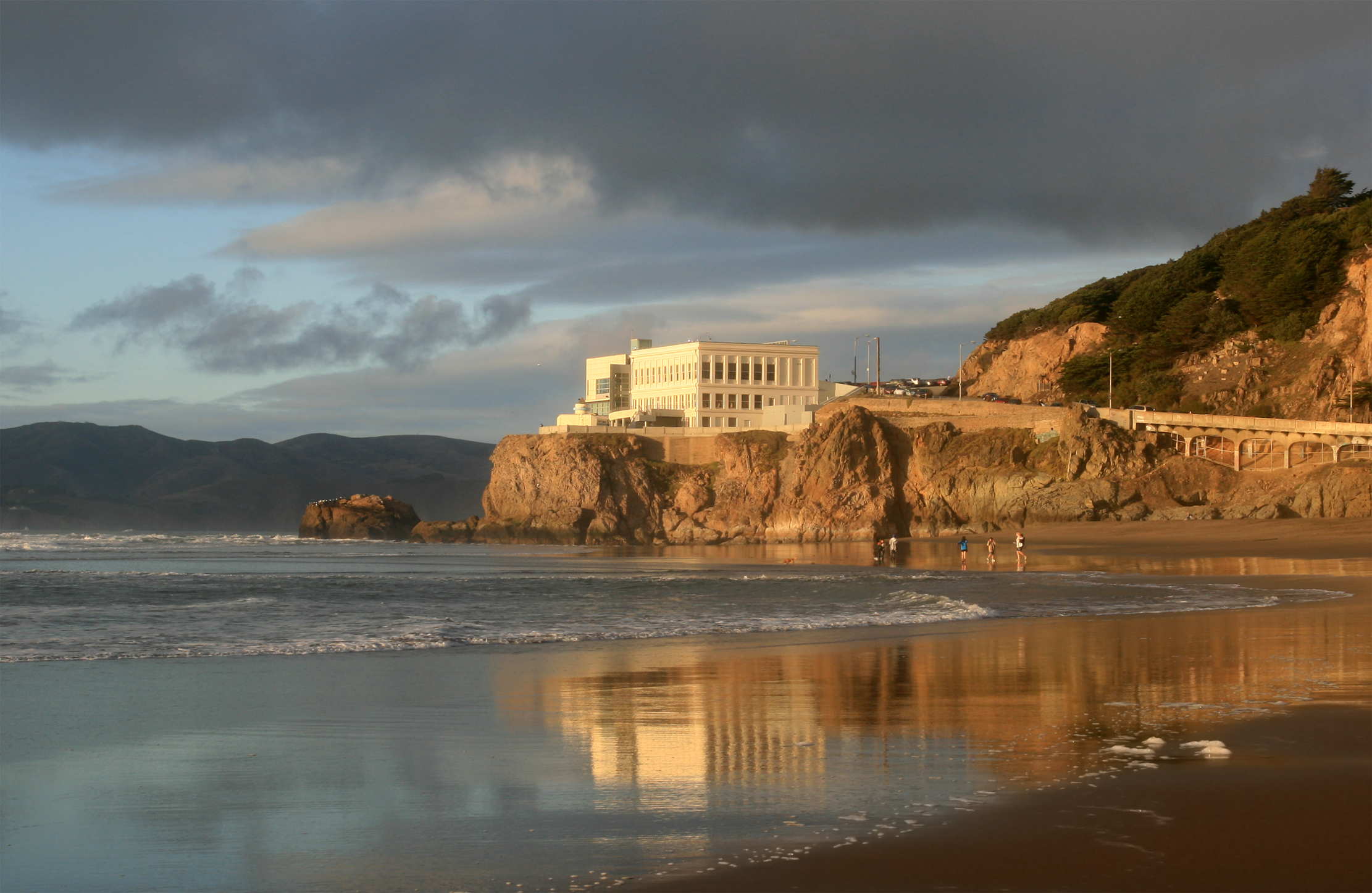 P.S. When we get off the plane tomorrow morning, we’re heading straight to Swan Oyster Depot. Happy Birthday Food Gal!

You know who never gets Labor Day off?

Chefs. And cooks. And bar backs. And dishwashers.

Nope, they never get three-day weekends. (Well, maybe they do, but not like the rest of us.)

Especially on Labor Day. And especially in Las Vegas (Nevada, not New Mexico).

Because over 315,000 hungry souls invade the High Mojave this weekend looking for fun, sun and sustenance.

And someone has to be working their tails off to feed them. From our vaunted frog ponds to the lowliest buffet, our restaurants will be humming today.

Labor Day also kicks off  “The Season” in our humble burg — the time of the year when the bargain-hunting day-clubbers leave, and every conventioneer, honeymooner, bevy of bachelorettes:

….and high-roller in da woild descends upon us, looking for whatever their version of “fun” is.

And, as we said, they all have to eat and drink.

And spend a lot of money doing it.

So, on some level, all those restaurant workers are probably not that unhappy about slaving away at the stoves today, because the living they make at it is probably better than it is in almost any other city in America.

Still though, they’re working today and you probably aren’t, so hats off to them: the good folks who feed us (and 42 million visitors a year), so well.

Hachi Japanese Yakitori Izakaya (Just opened – yet another izakaya around Spring Mountain Road – worth a look.)

Mothership Coffee (Get the coffee; use the pastries as a doorstop.)

PublicUs (Coffee and pastries don’t get any better around town.)