The problem is there aren’t any rules anymore.

Not in politics, and not in restaurants.

By nature, I’m not a rule follower. Laws are just suggestions, I’m fond of saying, but I don’t really mean it, especially when social intercourse is involved, and especially when dining pleasure is at stake.

Civility, decorum, manners, tradition — they’ve all taken a beating over the last decade, a beating that shows no signs of abating.

In that same vein, upscale eating has become a no-holds-barred, free-for-all.

Stoner food. Comfort food. Everything has to be cravable. Nothing is tethered to anything but the chef’s imagination — imaginations that are running wild from coast to coast because everyone is copying everyone else’s Instagrammable dishes.

On and on it goes from Grant Achatz to chefs from Portland, Maine to Portland, Oregon.

I don’t want to eat Iberian-inspired cuisine, I want to eat the real thing…or at least an American restaurant’s close approximation of the real thing. Simply tossing some pata negra ham on something does as much for me as putting pesto on peanut butter.

“Their food aesthetic is hard to define.”is what wins you national publicity these days, but who in the hell wants to eat something they don’t understand?  Grownups want definition;  teenagers need it, and young adults are searching for it. The only people who don’t want definition are children too stupid to know how essential structure is for things to make sense.

I get it: chefs are in the business of making food that people want to eat. If the crowd wants eclecticism, then pile French foie gras alongside Peruvian tiradito topped with a lamb necks and Millennials will beat a path to your door.

But there’s a big problem with this kind of eating: it’s exhausting.

Thematic restaurants are comforting. Whether it’s a Umberto’s Clam House, Joël Robuchon or In-N-Out Burger, you know what you’re getting when you walk in. You know (or hope) you’re going there to be fed something recognizable, and relax while you’re eating it.

When you have to figure out what’s good, something has been lost. When you have to constantly strain to parse what the chef is up to, then you’ve lost a big battle with my stomach before the war has barely begun.

I’ve been to Europe a lot in the past two years. Even as I type these words I am pining for the beef bourguignon in Beaune, or that pork shank in Munich. I find myself dreaming about Japanese fish restaurants and orgies of Roman pasta. What I don’t dream about is some Japanese-Mexican chef trying to make “Iberian-inspired” cuisine with a Nipponese twist. The worst foreign restaurants I’ve ever eaten in were “eclectic” in their cooking. The worst American restaurants I’ve eaten in were jacks of all trades and masters of none. Just because we live in a melting pot doesn’t mean our restaurant food has to reflect that.

There’s nothing new in food, despite what some chefs will try to tell you. There’s a reason you put ground up pork and not turkey meat in dumplings — because turkey meat brings nothing to the party. All those ingredients you see in Korean stews? Each one is there for a reason. Red wine with meat; white wine butter sauce with fish? The French figured this out a thousand years ago.

Why does no one put pasta in clam chowder? Because potatoes lend better starch and texture to the broth.

The other thing all the world’s cuisines figured out is how to eat. And by “how to eat” I mean the progress of a meal.

Light to heavy, climbing the food chain, all of it makes sense in the context of every country’s cuisine. Even the Ethiopians will tell you in what order to attack your injera. Simply throwing a bunch of small plates on the table confuses both the mind and the palate, to say nothing of lessening our sense of civility.

Who wants to spend time deciphering whether to get the Bento box and Scotch egg or the fried calamari with some riff on ramen? Or how about salmon with forbidden rice and tomatillo sauce? In a Vietnamese-American restaurant?

The best restaurants in Las Vegas know what they are and what they’re trying to emulate. Carnevino is an Italian steakhouse in the best sense of the word. Twist is French to its core, and Yui Edomae Sushi is a direct copycat of a hidden Ginza sushi joint. They are “foreign” restaurants (and they are essentially theme restaurants), but like all great orchestras they stick to the music and leave improvisation to the fools.

American restaurants have no idea what they are, and spend too much time concocting wild variations of dishes done better somewhere else by cooks who specialize in that kind of cooking. (I get it; chefs get bored. But thinking up oddball combinations to combat boredom is an insult to gastronomy.)

Here’s where I give kudos to James Trees for knowing what he wants to be and what he’s good at. Esther’s Kitchen may not sound like a modern Italian restaurant but that’s what it is.

James Trees knows the rules. He’s not afraid to tweak things here and there, but he sticks to the catechism of Italian cooking pretty closely.

I wish his competition was so inclined.

There are many things to like about Carson Kitchen, 7th & Carson, The Black Sheep, Sparrow + Wolf, Boteco, and The Kitchen at Atomic, but thematic consistency isn’t one of them.

To their core, they are new American restaurants that are all over the map with their (relatively short) menus. And to be blunt about it: this kind of cooking is rarely transporting. It may be picture-worthy and just fine for sitting in deafening rooms with screaming 35 year olds raving about how “amazing” everything is, but at the end of the day, it fills your belly but rarely your soul.

No matter how talented a hotshot young chef is, they’re never going to make a mole as well as a Mexican mamacita who’s been doing it all her life. Ditto raw fish. There’s a lot more to it than just putting some raw slices on a plate and throwing some lime dressing on top. Deep frying is an art, too, as is roasting. But restaurants that are trying to all of these things will excel at none of them.

Fusion food has had an interesting ride over the forty years I’ve been paying attention to restaurants. What started in the early 1980s with Wolfgang Puck’s Cal-Ital-French menus took a sharp turn east when Jean-Georges Vongerichten took New York by storm a few years later with his Thai-inflecked French. By the 1990s, Nobu Matsuhisha and Roy Yamaguchi had everyone talking about pan-Pacific flavors. But by the early 2000s, every food writer in America was over all of it. “Fusion-confusion” was how we mocked it back then.

Then, instead of going away, it took over. The recession had something to do with it. Fancy dining was dead (at least we thought so at the time), and restaurateurs, searching for an audience, had to find something casual and hip and, god help us, picture-worthy, to drive business in the door.

Enter restaurants with more moving parts than a Game of Thrones episode. All of it helped along by the molecular craze — which may have jumped the shark a decade ago, but which gave casual eateries license to try all kinds of wacky combinations.

The foam-thing may have died, but the “anything goes”legacy remains. And what we’re left with is wood-fired grills throwing Bento boxes at us…and udon carbonara.

I’m not necessarily against combining the world’s flavors into interesting combinations, but I am against it when it makes no sense….and when that’s all you’ve got. What I’m looking for is focus — on the menu and in the recipes — focus that seems to be lacking when all of these cultural lines get blurred.

Which leads me to ask: Do they teach this kind of cooking in culinary schools these days? I think not. I think it’s all a direct result of social media creating a “can you top this?” attitude among young chefs. Which deceives them into thinking they’re doing something fresh, when in reality, they’re all posing for the same selfies.

The mission statement of any chef in any restaurant is to satisfy his or her customers. And when all you’re doing is trying to dazzle someone, you don’t allow them to get comfortable enough to be satisfied.

Creativity is a great. The world can’t run without it. But creativity is a slippery slope when it comes to food — a slope that too many chefs are sliding down these days.

I think we’re slowly evolving past the small plates thing, and the something-for-everyone-thing, and the let’s-throw-Asian-accents-on-everything-thing.

This is a good thing, I think. Or maybe I’m just hoping.

It’s time to get back to basics — food that makes people feel good, not impress them for all of the wrong reasons. 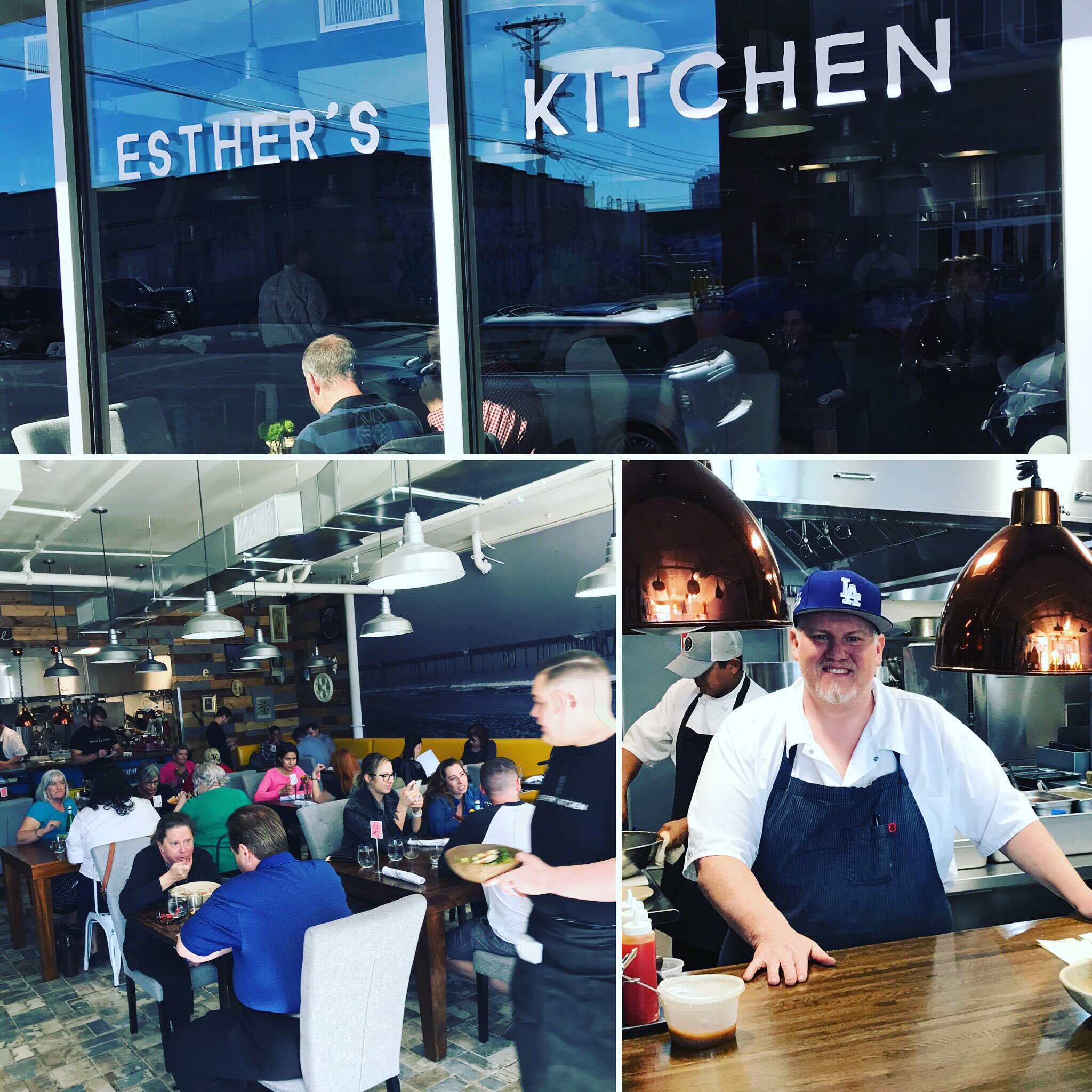 I feel sorry for Devin Hashimoto.