Nothing brings out the proles and trolls faster than criticizing the way someone is dressed.

Even if that person is dressed like a knuckle-dragging schlemiel  in one of the best restaurants in the world.

Such was the case last week when I tucked myself into my favorite table at Restaurant Guy Savoy in Caesars Palace to sample the culinary stylings of Julien Asseo — who’s been top toque there for over a year now.

About my third course in, I looked up to see a couple of women being led to the table beside me.

They were not young women, but they were not that old. If I had to guess, I’d say they were in their late 30s-early 40s. To put it another way, they were old enough to know better.

Both of them were wearing shorts and t-shirts and sneakers. Beat up ones, all three clothing items, on both women. The one closest to me was in jorts (jean shorts). More precisely, she was overflowing a pair of jorts that stuck to her fleshy, tattooed legs like sausage casings. They were not short shorts, but rather the type of almost-to-the-knee shorts one might wear to an outdoor picnic or to mow one’s lawn. The other lady’s hair was the sort of tangled mass you usually see after a day at the pool, pulled back by a scrunchy, sitting atop her head like a chlorinated shock of dirty wheat.

WTF? I thought to myself. I wasn’t so much offended by their appearance as I was stunned that they would wander into the joint in the first place. Keep in mind, to be seated at GS you must do the following things:

As so they did, and so they were handed menus where the appetizers start at $80 a pop.

“This ought to be interesting,” I thought to myself.

And then I snapped a surreptitious photo, intentionally blurry, solely to get my point across: 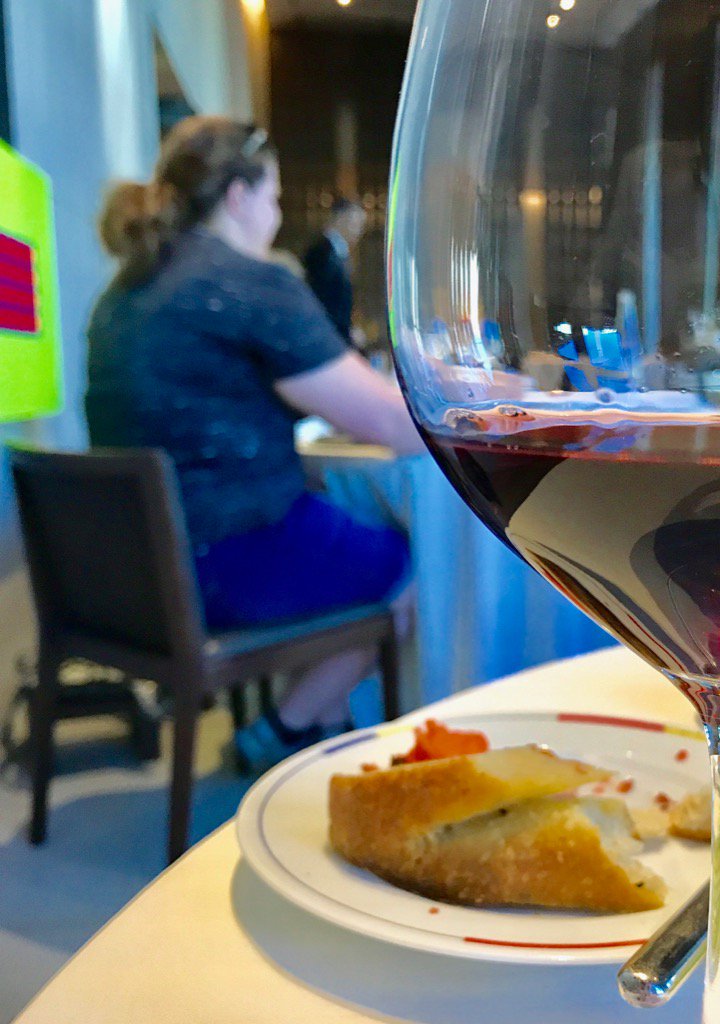 And then I tweeted:

Your right to look like a slob in restaurants ends where my appetite begins. #slobs #tourists #LasVegas

And from that point forward it was on.

People came out of their shoes.

Unhinged. Both pro and con.

Comments (in the hundreds, mostly on Facebook), ranged from the critical-but-thoughtful:

John I love you BUT taking a picture of someone without their knowledge/consent and then mocking their appearance is so distasteful. Can’t you make your very valid point without tearing down someone you don’t even know?

If I may ask another question: So, how WAS the food dressed at Guy Savoy? Since you were obviously there to critique attire.

Poor guy. Some lady wasn’t wearing a little black dress and sat in your oh-so-important line of sight. Ruining your ability to lay judgement on a glass of crushed fermented grapes and some bread. You know, the things people desperately need to be concerned about.

So, instead you were able to miraculously recover from this heinous, unscrupulous act of wardrobe warfare by taking evasive action and expertly reconfiguring your expertise to where it now needed it’s most attention: the assailant herself. To which you have now summoned the ire of your legions of infallible fashionistas to be brought down upon this wretched minimalist, for how dare she soil the lavishness of this establishment with her lack of pride and presentation, subjecting the likes of those otherwise there to enjoy the fringe benefits of an exquisite dining experience to a villainous mismanagement of apparel. Resulting in the vanquishing of appetite and the need to, without haste, exhort the masses of her inconsiderate and vile violations against humanity.

Body shaming tourists is so … beneath you, Sir.

One of the fun little evolutionary advantages that allowed homo sapiens to climb to the top of the food chain lies in the species ability to simultaneously rotate the head while adjusting the focus of the eyes. maybe one day, you’ll catch up…

To the comically illiterate:

I hope she Sue his Old Ass.

To the downright nasty:

You are a shameless asshole piece of shit

💩 Are you so perfect you can go and body shame others. Remember karma is a bitch sooner or later you too will be shamed on and loudly I hope. He doesn’t even know how spell shorts. WHO FUCKING CARES…LIVE AND LET LIVE! IF YOU DON’T LIKE IT THEN LEAVE. YOU ALL MUST LIVE BORING LONELY LIVES. GLAD I DON’T KNOW ANYONE SO SHITTY AND JUDGMENTAL AS ALL OF YOU ASSHOLES

💩GUESS WHAT YOUR SHIT STINKS AS MUCH AS ANYBODY. HOPE YOU ALL GET FAT N UGLY SO YOU CAN GET MORE N MORE MISERABLE. SHAME ON ALL OF YOU!

I saw the story that you were bothered about the women who was not dressed to your standards and bitched about it. if the restaurant let her come in dressed that way, your bitch is with them not her. I would bet you didn”t not have the “balls’ to say anything to her. If you ever said anything to me I would have stuck the filet up your ass real quick, Asshole.

Some people defended me (and scolded the scolders):

Not body shaming, shaming the fact that she like other clueless Americans insist on going dressed like they are camping to a fine dining establishment and other events that anyone who has a clue would go dressed appropriately. You’re the idiot for not realizing this. I never said anything about what she looked like body wise just lack of fashion or decorum.

I’m in the Italian Riviera where even though the vibe is laid back Italian, there’s nothing laid back about how people dress here. While day time is cut off denim with midriff baring tops, the chic Italian summer style comes out at night for dining even at casual, seaside restaurants. I am not talking about ball gowns and tiaras but rather summer-y dresses, men in button downs, etc. It elevates the entire experience to one in which you are glad to participate vs one that causes controversy. I haven’t seen men in denim shorts or women in lululemon, and I couldn’t be more grateful!

And a lot of people weighed in with comments such as:

This isn’t about people/body shaming. It’s about dressing appropriately for the occasion. A T-shirt and shorts isn’t appropriate for Guy Savoy, whether you’re Giselle Buchen or Mabel from Milwaukee.

When you’re going to a nice restaurant, dress for dinner like a civilized person. Otherwise there’s a Denny’s nearby. Clods who don’t do that do nothing for me. This has nothing to do with “shaming” someone for physical attributes that they can’t help. You choose to dress like a slob, as this woman did.

And finally, my friend and fellow critic John Mariani tried to put it into perspective:

There is no more tone anywhere anymore. All restaurateurs have caved in to the “my-ugly t-shirt and jeans are appropriate dress” demands of wholly clueless customers. Remember, they are “guests” in a restaurant and they should dress accordingly.

All of which led to a report from a local TV station.

Then to another report from the same TV station.

Those reports — seeking to gin-up controversy about me — in the end only furthered my cause and brought my slob-shaming to the fore. Yes, I am a snob, an elitist and an imperious, condescending parvenu. I’m especially those things in restaurants, and I’m really all about those things in fine restaurants — of which we have dozens in our humble burg. Who gives a shit how you look in Orlando or Branson, Missouri? You can look anyway you want at the Bubba Gump Shrimp Company while you tuck into your Shrimp Shack Mac n Cheese.

Las Vegas is Midtown Manhattan next to those repositories of rednecks, and when you eat out here, in our world famous restaurants, you need to bring your A-game attire, not your beach wear. The cooking demands it, the setting demands it, and the entire experienced is enhanced by looking your best when you are eating at your best. Who in the hell disagrees with this point?

Then it hit me: This isn’t about body-shaming, or slob-shaming or style-shaming. This isn’t about how, when and why we judge our fellow man. This is about class, pure and simple. Not “class” in the sense that those hapless women next to me at GS didn’t have any, but class in the sense of the social classes — the demarcation of income and appearance that define us all.

This is an elemental discussion that goes to the very core of our beings: the right to look and act the way you want versus society’s right to impose standards of behavior on its participants. We are both fiercely individual beings and part of a collective, and when those two impulses clash, strong feelings arise.

Social classes — whether you live in trailer by a swamp or in a tony, high-rise — impose their own rules on members. The less fortunate do not have the luxury of worrying about how they look; the upper orders probably spend too much time on the subject. When they have to meet in public, sparks are sure to fly. And where they meet (and clash) these days is in restaurants. Not at concerts or malls, not at work or at the beach, but in places where we all eat.

This is elemental stuff: haves v. have nots, Republicans v. Democrats, management v. labor, and when the gloves come off, it’s not pretty.

The trouble I have with how people look in public relates directly to their class in society — not to put them down, but to shame them for dressing beneath themselves. Because, you see, we are not talking about the proletariat here.

A truly poor person can’t help the way they dress. But if you’re coming to Las Vegas for vacation, you are not a poor person. If you have the presence and the wherewithal to stroll into Michael Mina or Spago or Guy Savoy, I do not feel sorry for you. You are a person of means. You are not living by a swamp and struggling to survive. You have money and a job and some degree of function within society, yet you choose to look like a bum, a beachcomber, or a refugee from a rock concert.

You do this because 1) you think your comfort trumps all other considerations when you are in public, and 2) you have been conditioned by society and other like-minded slobs that informality, no matter how poorly you look, is acceptable in all circumstances. This would be true if you were an island, or if you’re consorting with a like-minded mob (think: Phish fans and sporting events), but when we break bread as strangers, it behooves us, as social beings, to put our best foot forward. The Native Americans realized this a thousand years ago, Marge and Mabel from Manitoba think it doesn’t matter anymore.

It matters. To you, the restaurant, your fellow diners and society as a whole. When you look better, you act better. When you act better, you feel better about yourself. When you feel better about yourself, you interact with society in a more positive way. Not to get too philosophical, but it’s a short plunge from how informal society has gotten to how rude and crude our politics have become.

As for Marge and Mabel, well, they looked at the menu for about five minutes and then snuck out. The barest amount of awareness would’ve saved them their ordeal, but when all you’re thinking about is yourself, awareness of anything else never enters the picture.